Accessibility links
Gandhi Is Deeply Revered, But His Attitudes On Race And Sex Are Under Scrutiny He has been called racist, sexist and not manly enough. But the spiritual and political leader — who would have turned 150 on Wednesday — is deeply revered in India and around the world. 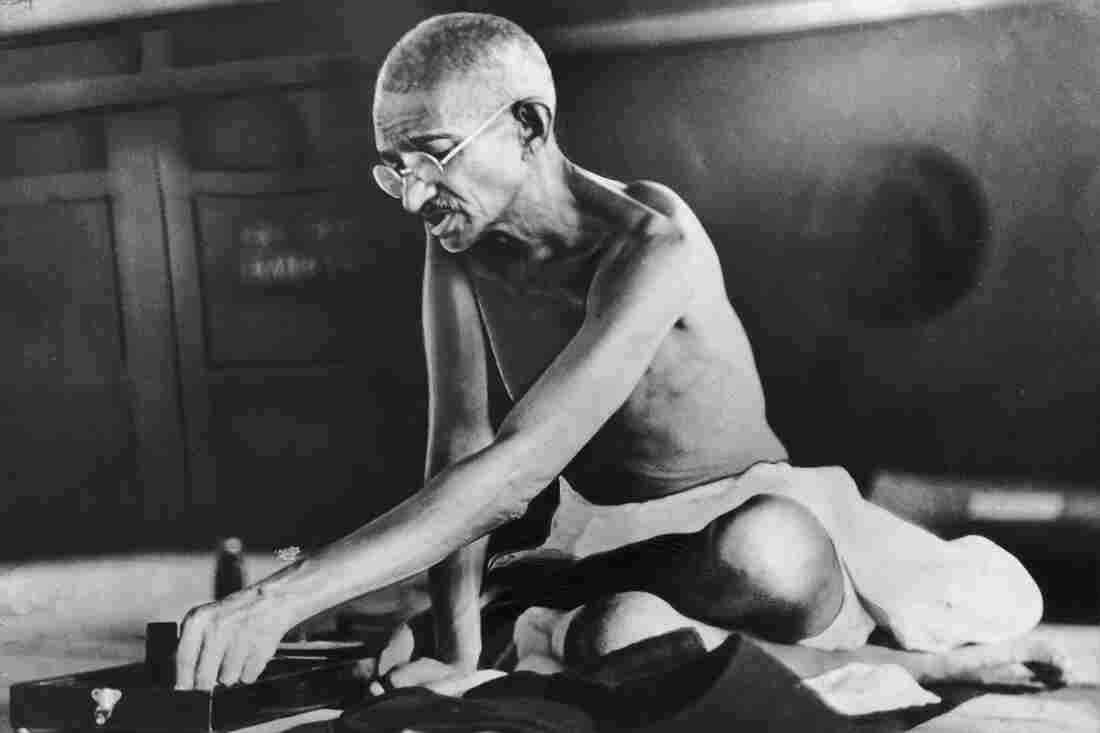 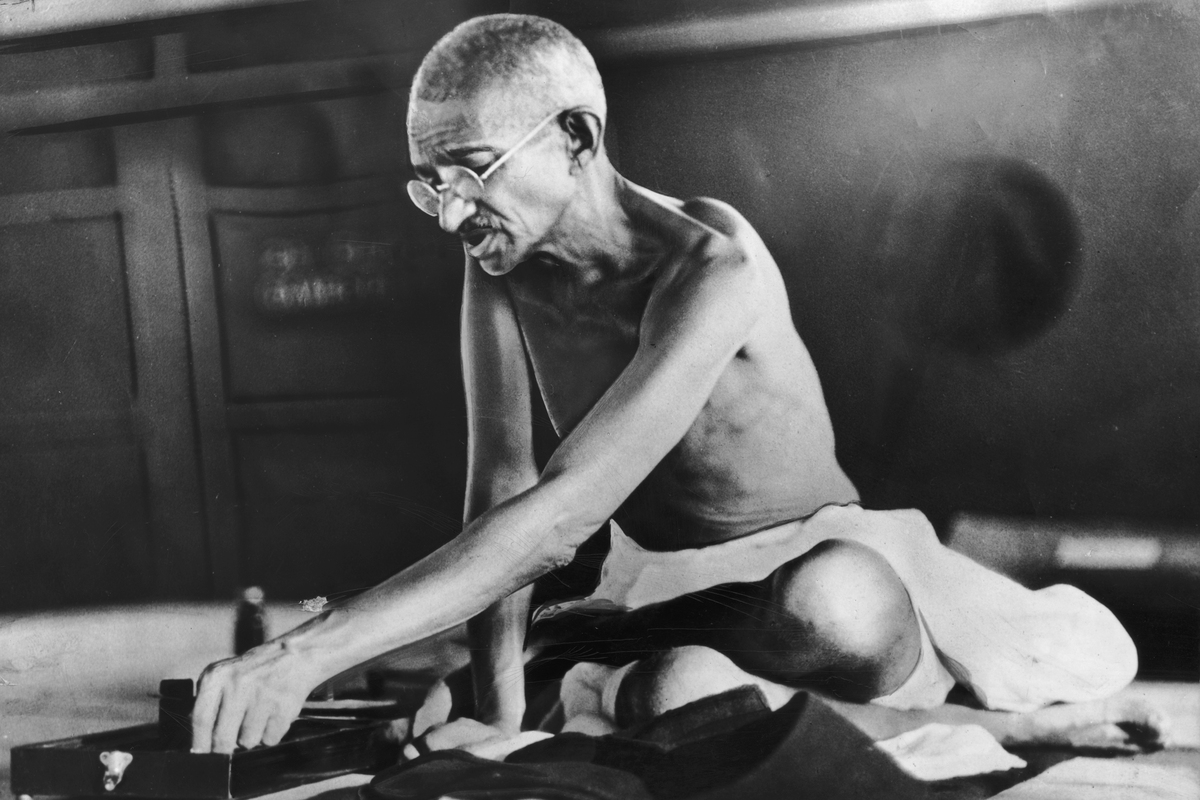 When Martin Luther King Jr. visited the villa in Mumbai, India, where Mohandas Gandhi stayed in the 1920s, he had a special request: He wanted to spend the night in Gandhi's bedroom.

It was 1959, 11 years after Gandhi's death. The house, called Mani Bhavan, where the Indian leader taught followers to spin their own fabric and where he launched satyagraha — his movement for truth and nonviolent resistance — had been converted into a museum. In an austere top-floor room where Gandhi's mattress and shoes still lay, King said he could feel "vibrations" of the Mahatma, or great soul.

"[King] was booked in a very good hotel. But he said, 'I am not going anywhere else. I am going to stay here, because I am getting vibrations of Gandhi,' " recalls curator Usha Thakkar.

So curators hauled in two cots, and the American civil rights leader and his wife, Coretta Scott King, spent the night next to Gandhi's vacant mattress. Afterward, Martin Luther King told All India Radio that he'd decided to adopt Gandhi's method of civil disobedience as his own. 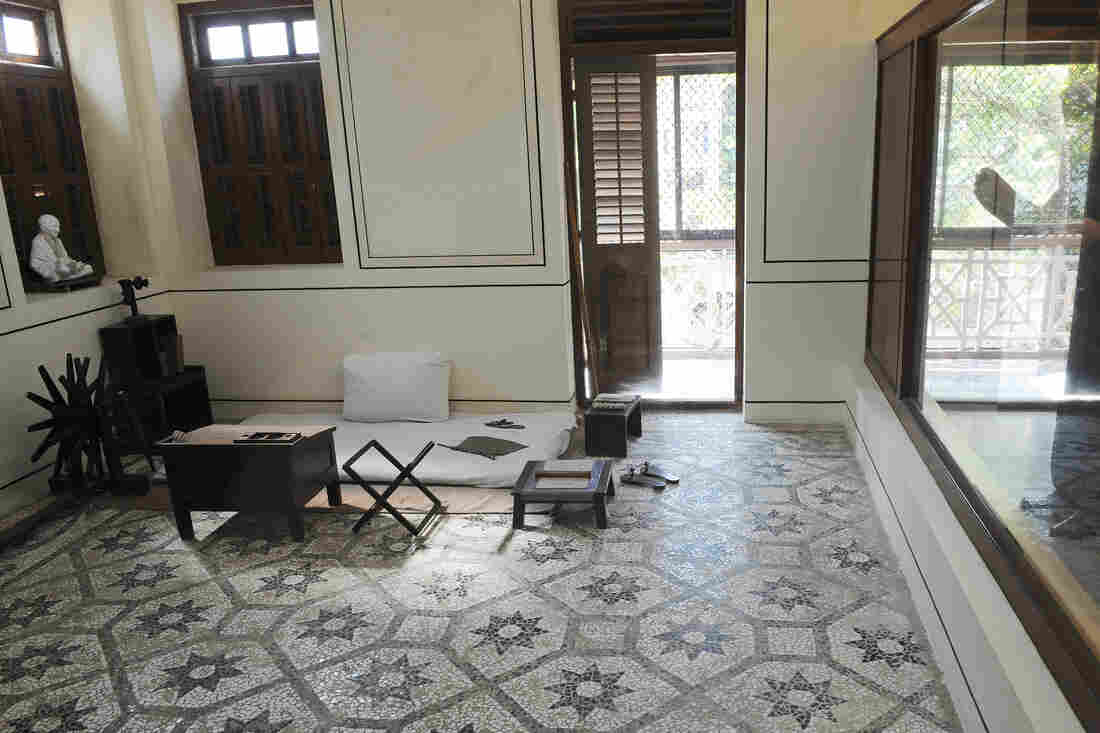 Gandhi's room in Mani Bhavan, the residence in Mumbai, India, where the leader planned political activities between 1917 and 1934. Indranil Mukherjee/AFP/Getty Images hide caption 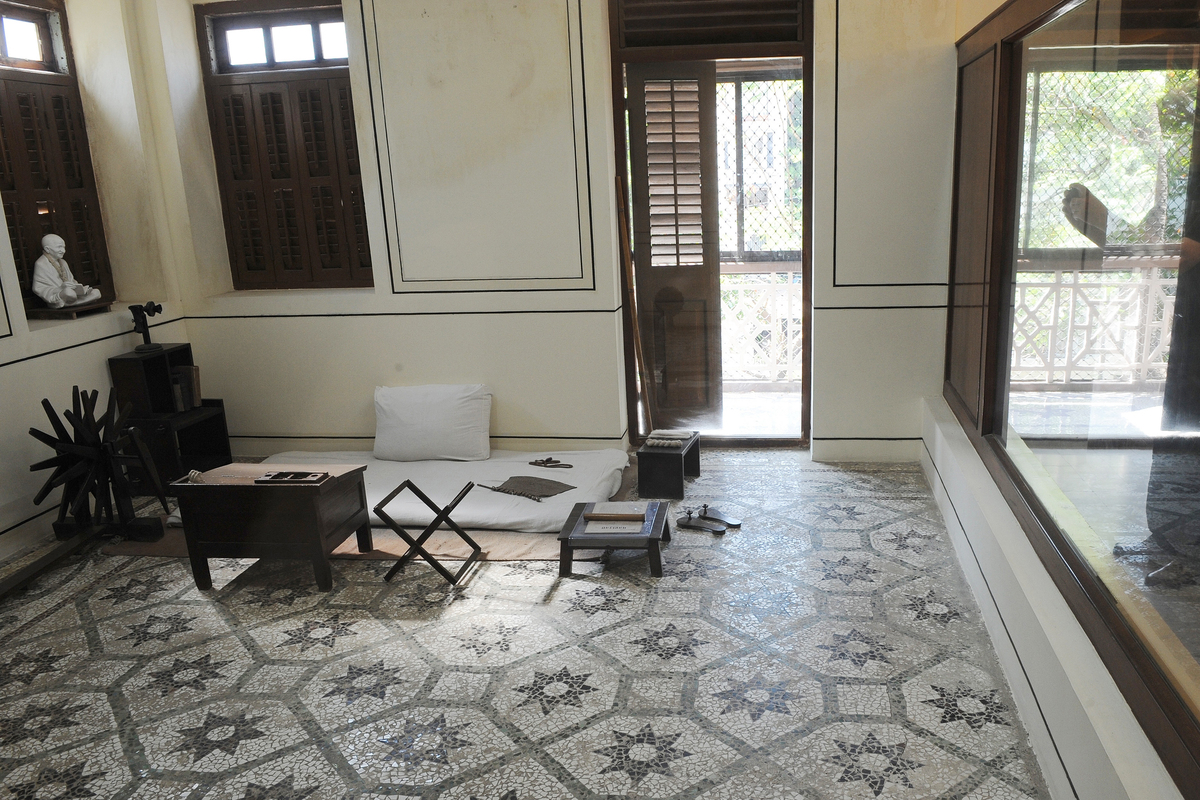 Gandhi's room in Mani Bhavan, the residence in Mumbai, India, where the leader planned political activities between 1917 and 1934.

Now, six decades later, many black Africans are calling Gandhi a racist. #MeToo activists are questioning his sexual practices. Hindu nationalists are rejecting Gandhi's vision of a pluralistic India that is strengthened by diversity.

Gandhi is still revered. He helped win India freedom from British colonial rule in 1947. But as the world marks what would be his 150th birthday on Wednesday, some of his habits and teachings are facing fresh scrutiny.

Gandhi was a racist

Last year, a Gandhi statue was removed from a university campus in Ghana. Activists there and in Malawi are using the hashtag #GandhiMustFall. They're angry about his early writings.

In 1903, when Gandhi was in South Africa, he wrote that white people there should be "the predominating race." He also said black people "are troublesome, very dirty and live like animals."

There's no way around it: Gandhi was a racist early in his life, says his biographer Ramachandra Guha.

"Gandhi as a young man went with the ideas of his culture and his time. He thought in his 20s that Europeans are the most civilized. Indians were almost as civilized, and Africans were uncivilized," Guha, 61, told NPR in an interview in May at his home in Bengaluru, India.

"However, he outgrew his racism quite decisively, and for most of his life as a public figure, he was an anti-racist, talking for an end to discrimination of all kinds," he said.

That included gender discrimination. Gandhi championed women in politics. But he was also obsessed with his own celibacy. In his late 70s, before he died at 78, he slept naked with his grandniece when she was in her late teens. He said he wanted to test his willpower to abstain from sex.

Nowadays, most people would call that abuse. Some question whether the young female was capable of giving consent as a minor to a man who was so revered and so much more powerful than she.

In 1962, when British filmmaker Richard Attenborough began researching what would become his 1982 Gandhi film, he asked Jawaharlal Nehru, India's first prime minister, how he should portray his late colleague. Nehru famously replied that Gandhi was "a great man, but he had his weaknesses, his moods and his failings." He begged Attenborough not to turn Gandhi into a saint. He was "much too human," Nehru said.

Father of the nation

In India, Gandhi is nevertheless treated as a saint — the father of the nation. His birthday, Oct. 2, is a national holiday. Gandhi's face is on India's currency. His portrait hangs in government offices.

Practically every major city in the country has at least one Gandhi memorial. At the garden in New Delhi where he was assassinated in 1948, just months after India's independence from Britain, tourists can stroll the stone walkway where Gandhi took his final steps.

"When people come here, they get highly emotional. Some of them have tears in their eyes and go back with a heavy heart," says researcher Sailaja Gullapalli, giving NPR a tour. The garden and the house on its premises, now another Gandhi museum, get about 200,000 visitors a year. 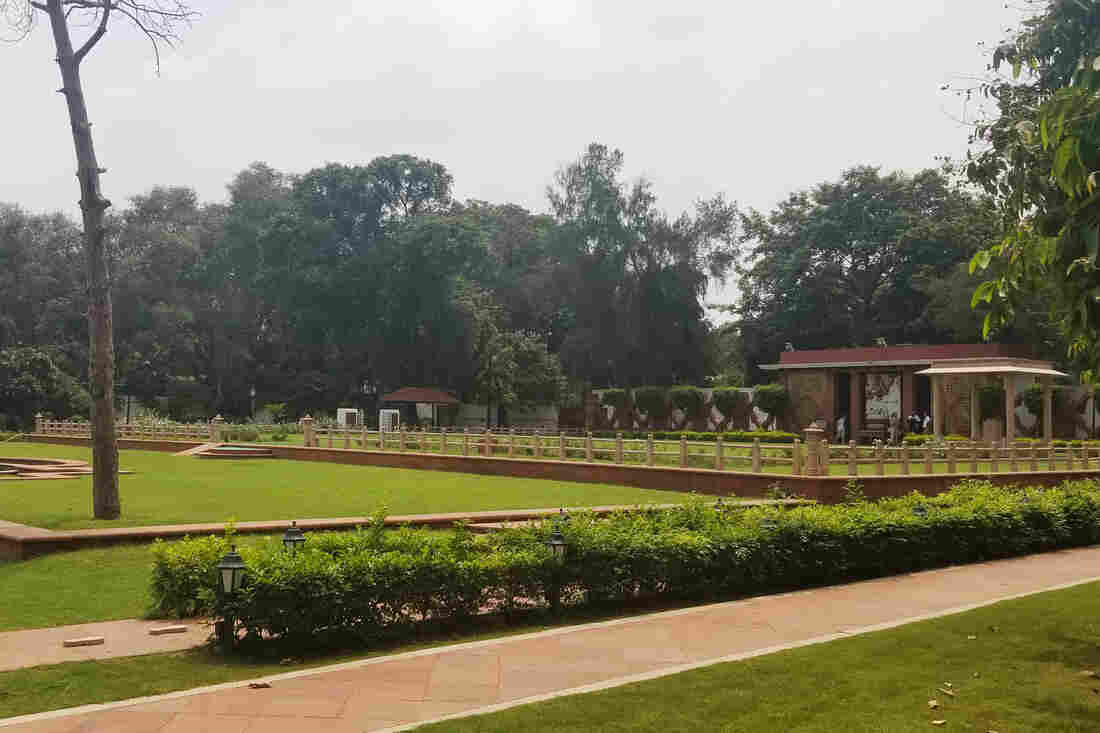 The garden in New Delhi where Gandhi was assassinated on Jan. 30, 1948. It's now a memorial open to tourists. Lauren Frayer/NPR hide caption 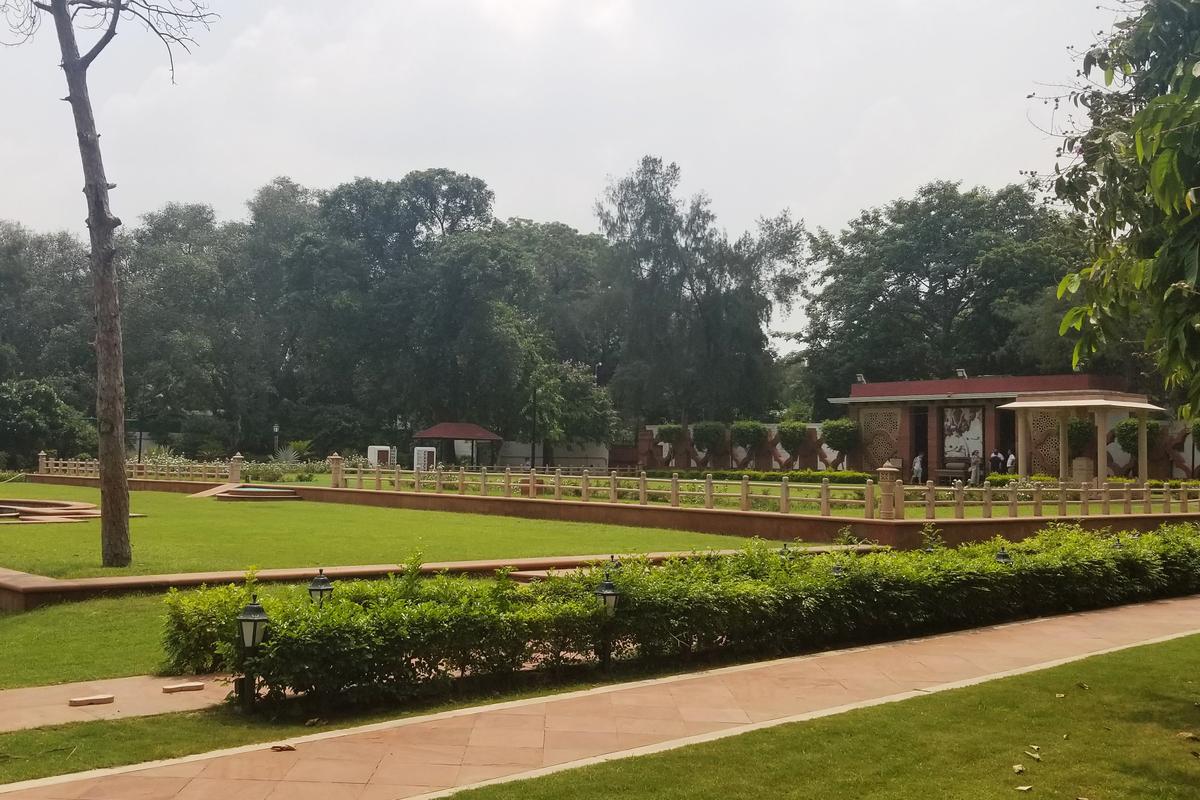 The garden in New Delhi where Gandhi was assassinated on Jan. 30, 1948. It's now a memorial open to tourists.

On Gandhi's 150th birthday, events are planned across the globe: a vegetarian food festival in London and a walkathon for peace and tolerance in Dubai. Across India, schools are holding special assemblies and singing the freedom leader's favorite prayer songs. There are trash collection drives and a mass fabric-spinning session at the Mahatma's old Mumbai villa.

But India is also where the Mahatma may have fallen furthest from the pedestal. 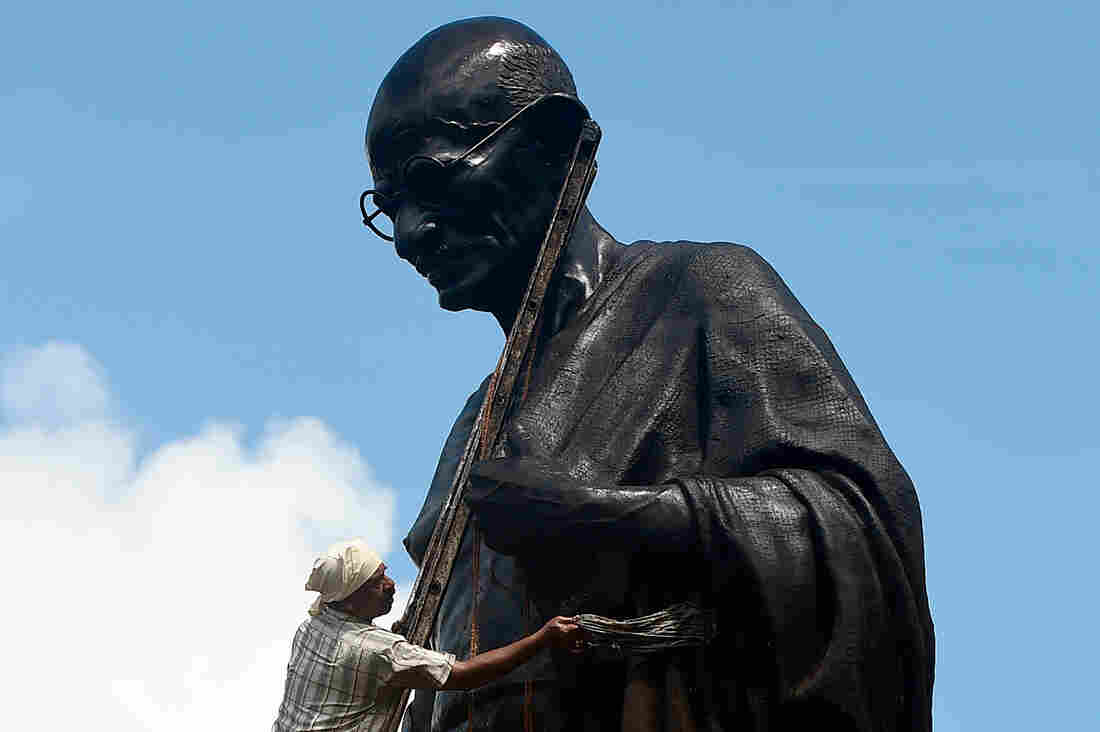 A worker cleans a statue of Gandhi in Mumbai on Tuesday, the day before the 150th anniversary of the birth of the Indian philosopher and anti-colonial activist. Punit Paranjpe/AFP/Getty Images hide caption 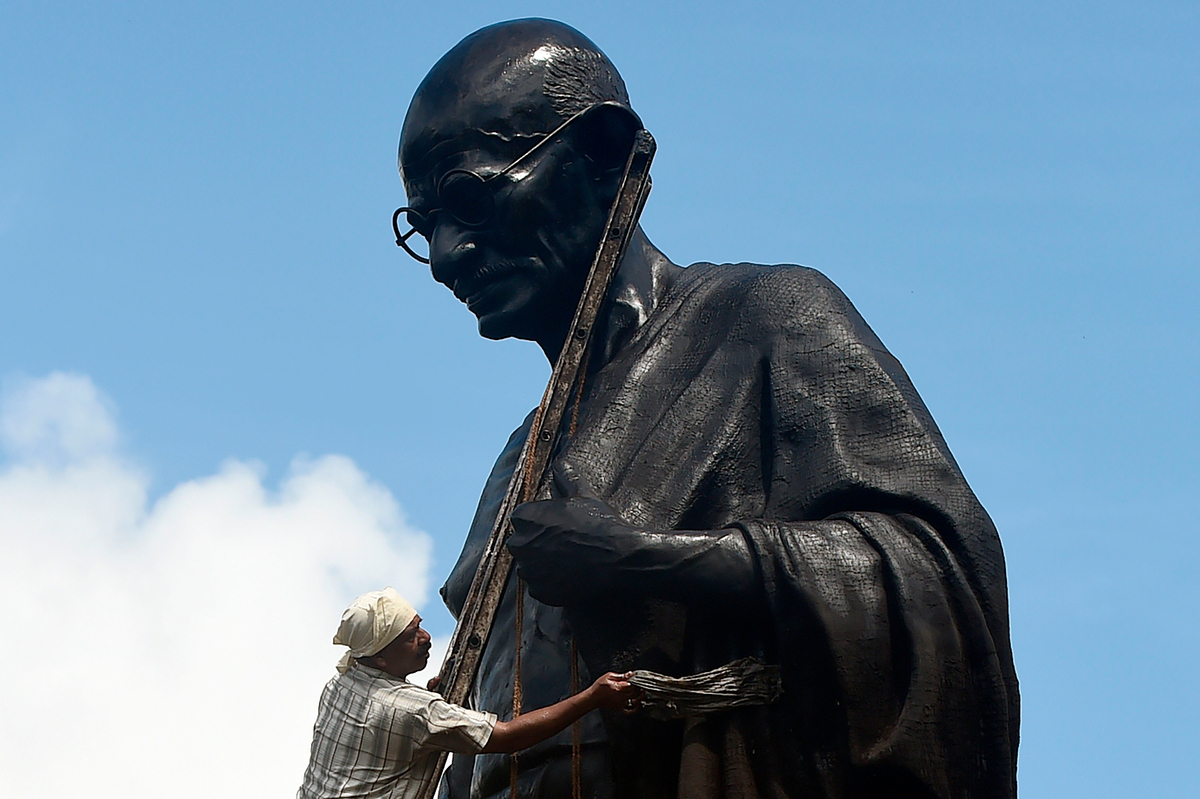 A worker cleans a statue of Gandhi in Mumbai on Tuesday, the day before the 150th anniversary of the birth of the Indian philosopher and anti-colonial activist.

The man who assassinated Gandhi, Nathuram Godse, was a follower of Hindutva — Hindu nationalism. Godse wanted India to be a Hindu country and objected to Gandhi's vision of India as a secular, pluralistic democracy. (India is about 80% Hindu but also has one of the world's largest Muslim populations, making up about 14% of the country, or around 180 million people.)

"The Hindutva type of ideology considered [Gandhi] to be an enemy because he was talking of secularism and not of Hinduism," says Yogesh Kamdar, honorary secretary of the Mani Bhavan museum and the son of Indian freedom fighters.

Gandhi's vision won. When colonial India was partitioned in 1947, Hindu-majority India became a secular democracy, alongside the Islamic Republic of Pakistan.

But Hindu nationalists are now in power in India. Some of them still don't accept Gandhi's vision. Like Godse, they want India to be a Hindu country. Some extremists among them even celebrate Gandhi's murder.

That shocked the country. The candidate, Pragya Thakur, was forced to apologize — but nevertheless won her election. She is now a member of Parliament representing the central Indian city of Bhopal.

Thakur is an outlier though. Most Indian politicians admire Gandhi, and even those who don't have to tread very carefully.

"Very grudgingly, and maybe as a part of strategy, they have also adopted Gandhi as an icon. They had to!" says Kamdar. "Otherwise it is very difficult to survive politically."

Modi is headlining events for the 150th anniversary. The Mahatma's signature round spectacles are the logo for Modi's Clean India campaign — a national sanitation effort inspired by Gandhi.

On weekends, crowds throng a park in New Delhi to pay their respects at the spot where Gandhi was cremated, called Raj Ghat. There's a long black marble slab covered in marigolds and topped with an eternal flame. The memorial inspires reverence, and also a few whispered debates about the Mahatma's legacy.

"It's gone nowadays. It's really gone," tourist Ira Parikh, 44, says of Gandhi's swadeshi movement — the idea that Indians should spin their own cloth and work in simple local industries. "Few [people] are following these things anymore. I don't think it's practical." 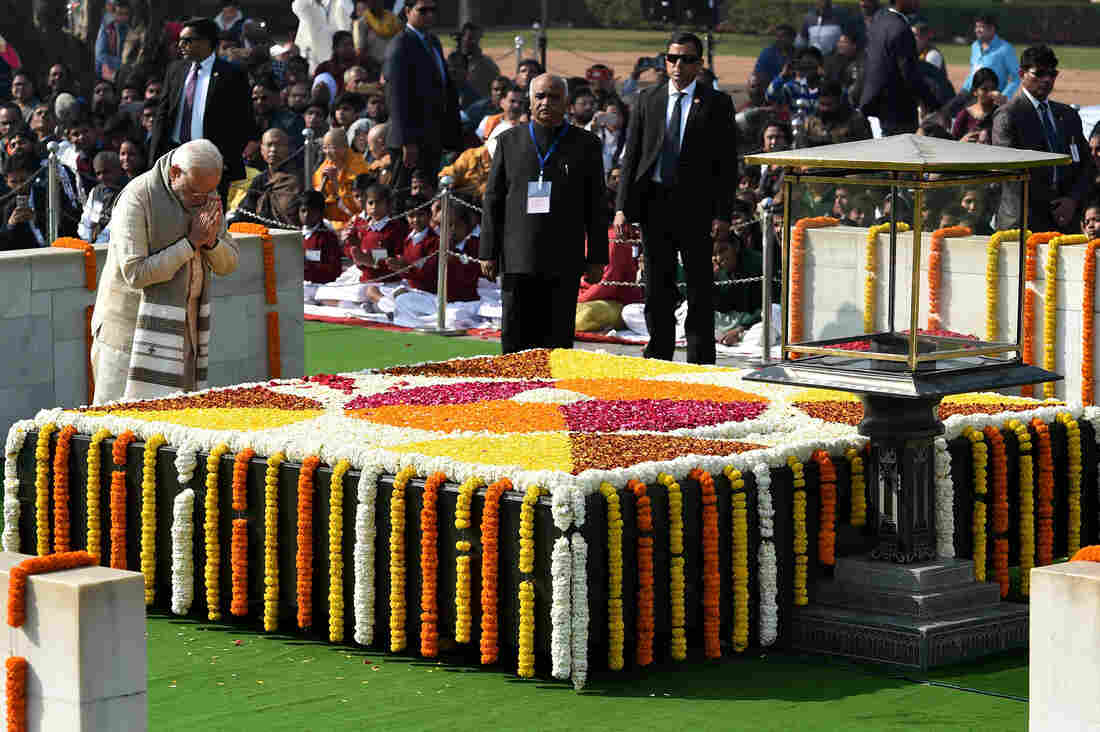 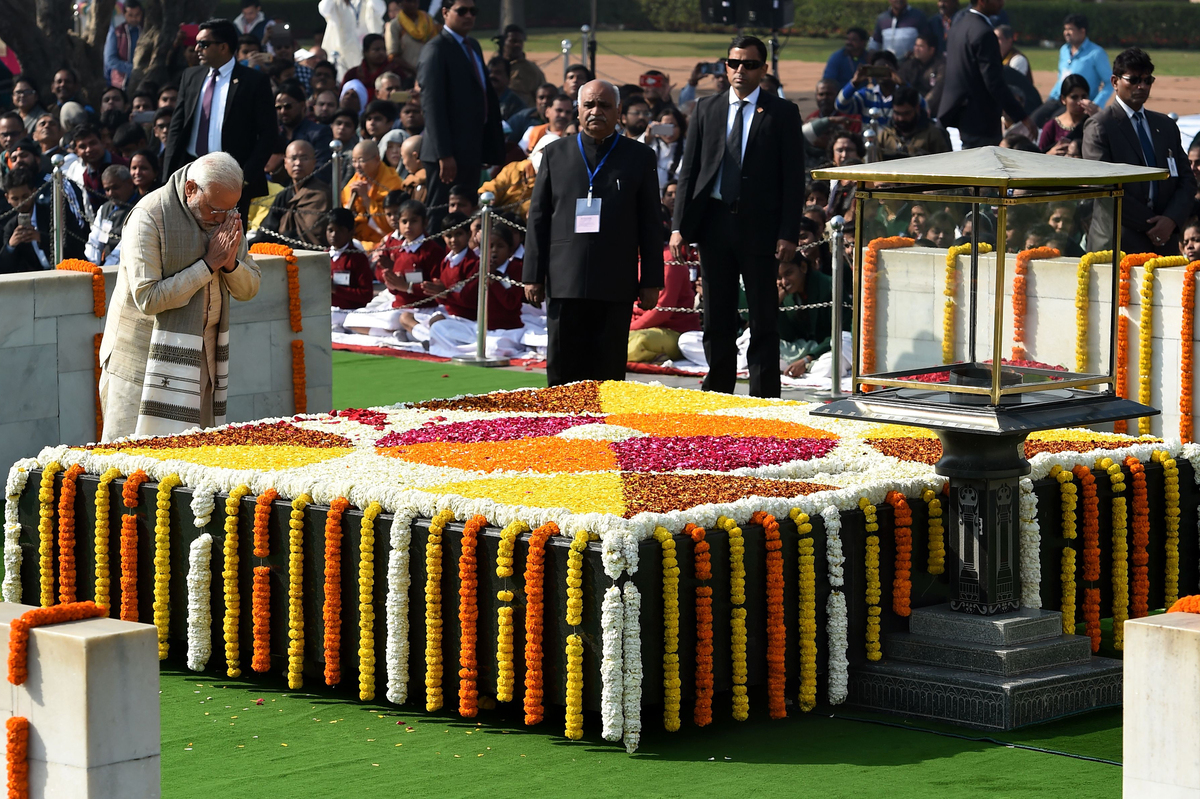 Indian Prime Minister Narendra Modi pays homage at Raj Ghat, the memorial for Gandhi in New Delhi, on Martyr's Day on Jan. 30, 2018, to mark the 70th anniversary of Gandhi's assassination.

Parikh says the historical figure's ideas can seem a bit quaint in booming, globalized India. Her two sons learn about him in school, but one of them says he struggles to see how those lessons apply to his own life.

"When someone says, 'Oh, he was great,' there's always some criticism," says Harsh Parikh, 17, recounting debates with friends about Gandhi's tactics. "Like, 'No, he could have got us freedom way before' [if he had been willing to use violence]."

What these teenagers are weighing is at the very heart of Gandhian philosophy: "His absolute insistence on nonviolence, which young men see as pussyfooted and weak-kneed and — dare I say — feminine and hence not macho enough," says Guha, the biographer.

Gandhi's restraint can look naive in today's India, confronted with terrorism. Modi has sought to portray himself as a strong pair of hands who isn't afraid to strike at neighboring Pakistan if provoked. (Both countries have nuclear weapons.)

At the other memorial across New Delhi, in the garden where Gandhi was shot dead, a 76-year-old man sits with a spinning wheel. He comes every Friday, he says, because Gandhi was assassinated on a Friday. 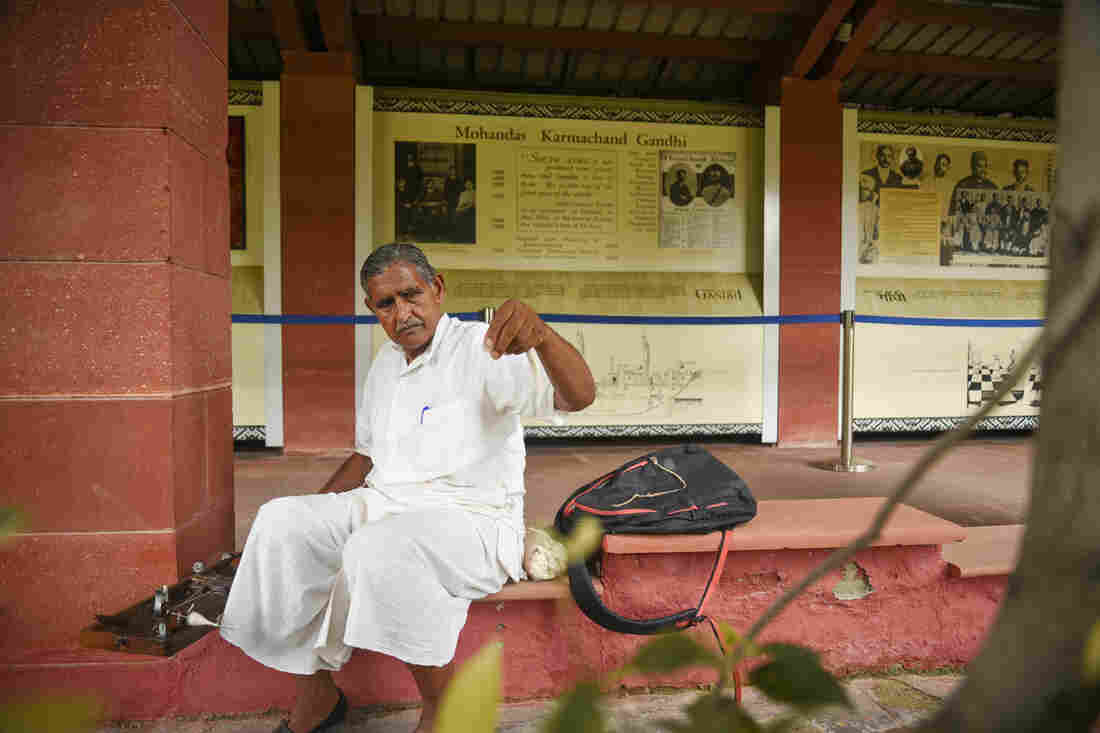 For an hour a week, Musaddilal Gupta, 76, visits the garden where Gandhi died and spins his own thread on a spinning wheel, as Gandhi taught. NPR hide caption 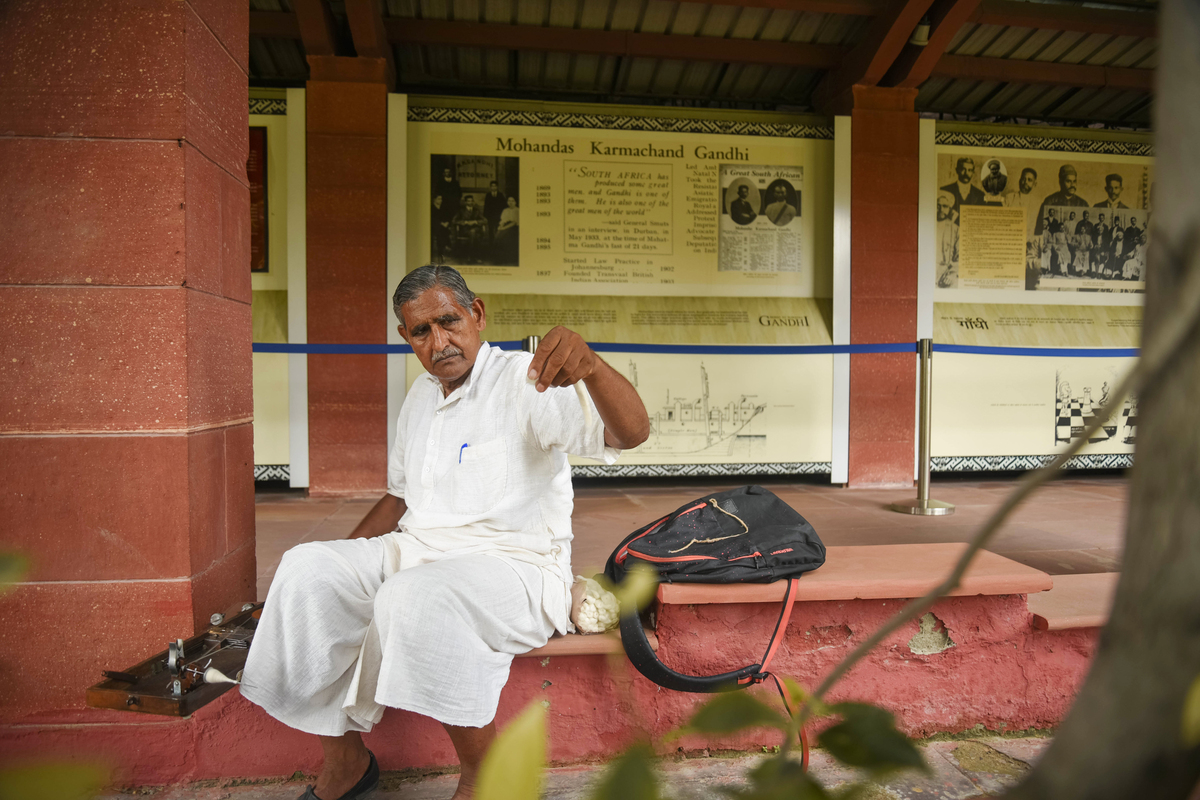 For an hour a week, Musaddilal Gupta, 76, visits the garden where Gandhi died and spins his own thread on a spinning wheel, as Gandhi taught.

A retired civil servant, Musaddilal Gupta escapes modern India for about an hour a week "as a tribute to him," he says. A few steps from where Gandhi died, Gupta spins his own thread — as the Mahatma taught.

"When this becomes cloth and when I wear it, it's a feeling of joy, to produce something yourself," Gupta says. "His principles are so strong! You may or may not accept it."

"But the day will come when this palace of cards will fall," he says, "and Gandhian principles will remain."