Accessibility links
Book Review:'It All Ties,' Rachel Maddow Says Of Oil And Gas, Russia And Democracy In 'Blowout' The MSNBC host's book compiles the most convincing research and journalism on the harm oil and gas have done to global democracy, and then weaves together a narrative of greed, power and corruption.

'It All Ties,' Rachel Maddow Says Of Oil And Gas, Russia And Democracy In 'Blowout'

'It All Ties,' Rachel Maddow Says Of Oil And Gas, Russia And Democracy In 'Blowout' 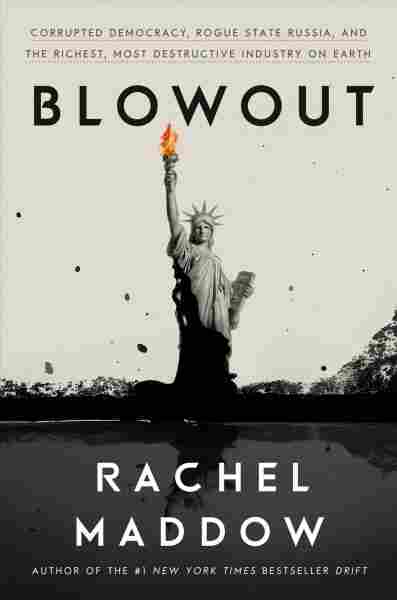 Corrupted Democracy, Rogue State Russia, and the Richest, Most Destructive Industry on Earth

The oil and gas industry, according to MSNBC host Rachel Maddow, is "ranging like a ravenous predator on the field of democracy." It is "Godzilla over downtown Tokyo." It is "the richest, most powerful, and most destructive industry on the globe."

Halfway through Blowout, Maddow's new book about the industry's impact on democracy worldwide, these claims begin to feel understated. In short, accessible chapters, Maddow covers apparently distinct topics, from fracking in Oklahoma to the Deepwater Horizon oil spill to the Sochi Olympics to corruption in Equatorial Guinea to the ring of inept Russian spies that inspired The Americans and, finally, to Russian interference in the 2016 election. "Seems unlikely," she writes, "but it all ties."

Maddow's tone will be familiar to viewers of her show: It's knowing, cynical, and snide. The jokes and insults are presumably meant to leaven a difficult subject; I found them irritating, an exercise in letting readers feel morally and intellectually superior. The easy contempt is most grating when it seeps outside of the circle of her legitimate targets: "What [Russia] needed right then — like a junkie long past his last hit — was sanctions relief."

But Blowout nonetheless feels like a public service. Though its value is not in original reporting, it usefully compiles the most convincing research and journalism on the harm that oil and gas have done to global democracy, and then weaves together a narrative of greed, power and corruption.

For instance, Maddow explains the "resource curse:" the well-established idea that finding oil often harms countries, rather than helping them. She uses Equatorial Guinea as a case study, based on the reporting of journalist Ken Silverstein, to show how profits from the nation's oil went not to citizens, but to kleptocrats. Silverstein reported extensively on the spectacular waste of Teodoro Nguema Obiang Mangue, son of the current president, who once spent $700,000 of that money to rent a boat to "woo the rapper Eve," among other absurd purchases (we never find out whether Eve was impressed). Meanwhile, the citizens of Equatorial Guinea remained deeply impoverished.

Maddow also looks at the harm that gas and oil have done closer to home. A particularly striking example is the pressure put on Austin Holland, a University of Oklahoma researcher, by energy companies and his own university to suppress his findings that fracking was causing earthquakes (lots of earthquakes).

And then there is Russia. President Vladimir Putin is set on a campaign "to piss in the punch bowl of free elections all over the civilized world," she writes. Maddow, again drawing on others' reporting, makes the case that oil and gas was a way for Putin to wield political power, especially in Ukraine: "The infinitely corruptible energy business allowed Putin to pick and choose who would be rich and who would be powerful in Ukraine."

Blowout concludes, reasonably, with a case for more and better government regulations. By this point, Maddow has already amply demonstrated the harm oil and gas companies can inflict when they aren't restrained. But she makes a further, stranger case for regulation: that oversight is needed because the oil and gas companies can't really help it. It's just who they are: "What is the point of outrage at oil and gas producers? What good can possibly come of it? It's like being indignant when a lion takes down and eats a gazelle. You can't really blame the lion. It's who she is; it's in her nature."

It would have been valuable, instead of making this weirdly exculpating argument, for Maddow to spend some pages on the places that have already implemented some of her environmental suggestions: countries in Western Europe.

Perhaps the book's most interesting suggestion is a theory of why Russia interfered in the 2016 U.S. election: not only because Putin detests Hillary Clinton personally, but also because Obama-era sanctions were threatening his ability to extract oil, and thus keep a grip on power. And the companies with the technology to help him get that oil are American outfits that don't mind doing business with a crook. As Maddow would say, it all ties together.