Accessibility links
Investors Are Back In Saudi Arabia A Year After Khashoggi's Killing The oil-rich kingdom has poured millions of dollars into a global damage control campaign. While some governments have shunned the country, the Trump administration remains a strong supporter. 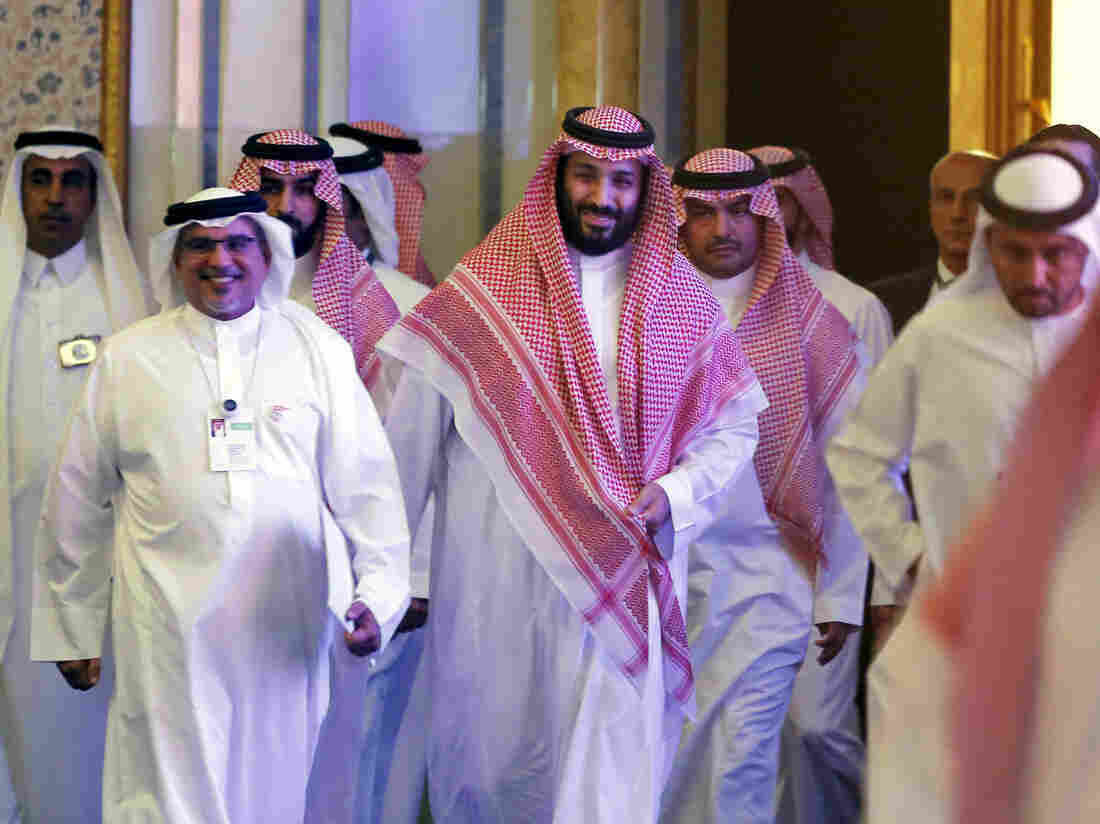 Saudi Crown Prince Mohammed bin Salman attends the Future Investment Initiative conference, in Riyadh, Saudi Arabia, on Oct. 24, 2018. Many major executives backed out of the event after the killing of journalist Jamal Khashoggi. This year, some of the big corporate names are expected to return. Amr Nabil/AP hide caption 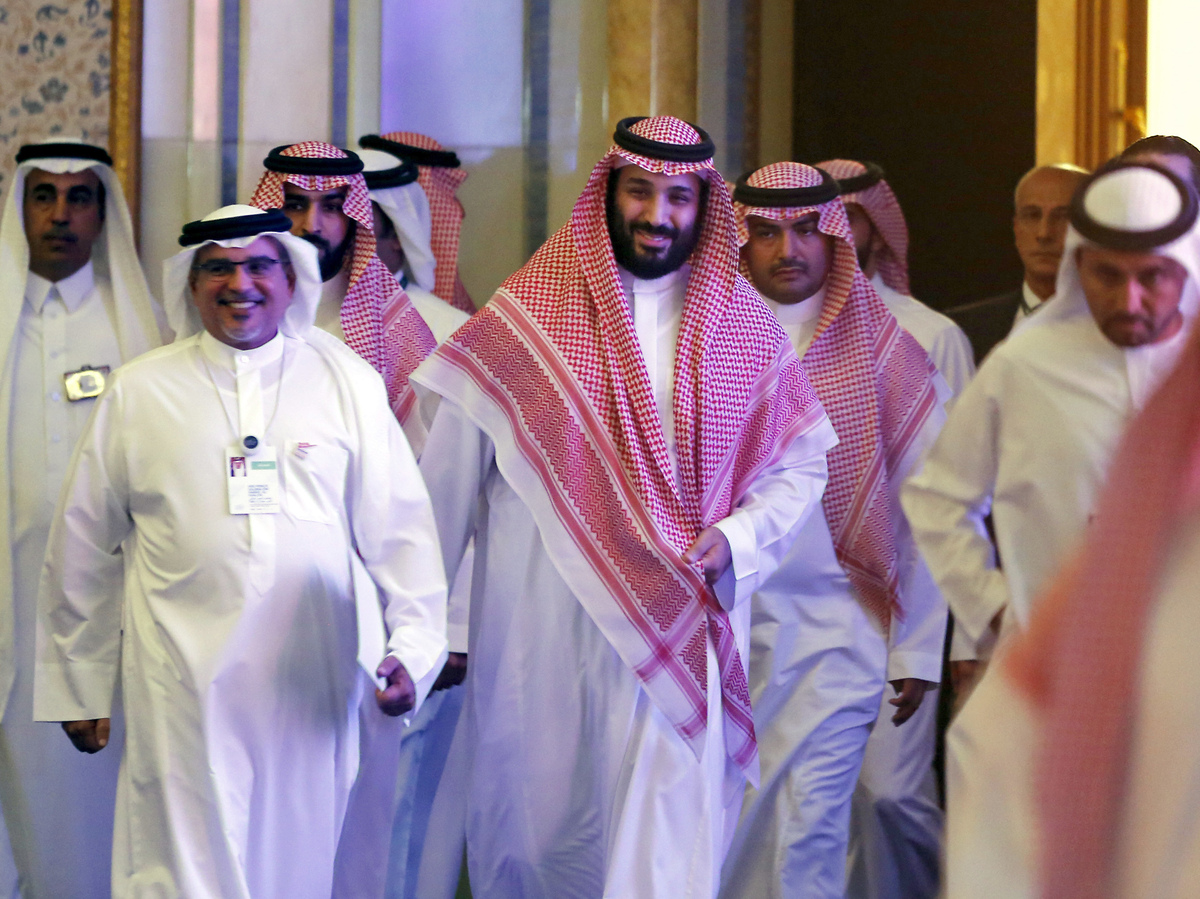 Saudi Crown Prince Mohammed bin Salman attends the Future Investment Initiative conference, in Riyadh, Saudi Arabia, on Oct. 24, 2018. Many major executives backed out of the event after the killing of journalist Jamal Khashoggi. This year, some of the big corporate names are expected to return.

Three weeks after journalist Jamal Khashoggi was killed a year ago at Saudi Arabia's Consulate in Istanbul, an international investment conference got underway in the Saudi capital of Riyadh.

The Future Investment Initiative — dubbed "Davos in the Desert" — was set up to showcase business opportunities in the kingdom. A year earlier, it had been a glittering event and brought in some of the biggest names in international banking and investment. But not last year.

Since Khashoggi's Death, Saudi Arabia Struggles To Repair Its Reputation

Since Khashoggi's Death, Saudi Arabia Struggles To Repair Its Reputation

Dozens of investors and government officials quickly dropped out of the conference after the Oct. 2, 2018, Khashoggi killing, including the CEOs of financial firms BlackRock and JPMorgan Chase and the then-head of the International Monetary Fund. At the time, there were daily, gruesome revelations about Saudi assassins and dismemberment of the Washington Post columnist.

"A lot of people, a lot of foreign investors stayed away," says Kristian Coates Ulrichsen, a fellow for the Middle East at the Baker Institute for Public Policy at Rice University.

Saudi Arabia has taken some financial and political hits in the wake of Khashoggi's killing, and Crown Prince Mohammed bin Salman's reputation has suffered. U.S. intelligence agencies have assessed that the heir to throne played a role in the killing. But the damage has been limited by the ongoing support of the Trump administration, which says the U.S. has important financial dealings with Saudi Arabia.

The third annual "Davos in the Desert" will be held in Riyadh at the end of this month. Some of the big corporate names are expected to return this year.

Ulrichsen says Saudi Arabia — the world's leading crude oil exporter — still has so much oil wealth, it is irresistible for many investors.

"They started to come back over the past few months. So it's an initial outcry and then quietly a few [investors] began to go back into Saudi Arabia, tempted by the promise of contracts ... that Mohammed [bin] Salman is trying to push through," he says.

But Jean François Seznec, a scholar at the Middle East Institute in Washington, D.C., says many foreign investments are being delayed, in large part out of concern over the crown prince. Seznec says his autocratic tendencies, such as detaining hundreds of wealthy Saudis at the Ritz Carlton hotel for several months after a November 2017 roundup, had already worried foreign investors. Seznec believes Khashoggi's killing reinforced those concerns.

"The fact that now the country is a one-man show, you know, means that you're at the mercy of pleasing this ... one person," Seznec says, referring to the powerful crown prince. "And if you are going to put many millions of dollars in investment and a lot of management time and so on, you don't want to be at the mercy of one person. That's too dangerous."

This is a far cry from the months leading up to Khashoggi's death, when the crown prince was warmly welcomed in Europe and the U.S., where he met with tech giants, Hollywood stars and President Trump.

Trial Begins For 11 Suspects In Killing Of Saudi Journalist Khashoggi

Hussein Ibish, a senior resident scholar at the Arab Gulf States Institute in Washington, says the crown prince had been carefully cultivating his image as a young royal pulling Saudi Arabia into the 21st century. He has allowed women to drive and promoted entertainment and business opportunities in the kingdom. Then Khashoggi was killed.

"I think the image of the crown prince as a reformer and as a forward-looking person sort of evaporated at that moment," he says. "He hasn't been able to rebuild it especially in the United States, but also in the rest of the West."

Saudi Arabia has been trying hard to repair its image. In the wake of the Khashoggi killing, the kingdom redoubled its global charm offensive, pouring tens of millions of dollars into the world's biggest lobbying firms, according to Ben Freeman, the director of the Foreign Influence Transparency Initiative at the nonpartisan Center for International Policy, which tracks the Saudi dealings. Freeman says Saudis spend the most on a Washington, D.C.-based firm called Qorvis Communications, also known as the MSLGroup.

"When the Saudis were really in a freefall ... in just the three months after the murder of Jamal Khashoggi, the kingdom of Saudi Arabia paid Qorvis Communications over $18 million to do public relations work on their behalf on the hill," Freeman says. Qorvis did not comment for this story.

The Saudis haven't actually paid a large price for the murder of Jamal Khashoggi.

They have gone beyond the usual outreach to Congress, journalists and think tanks, he explains. "Their lobbyists have reached out to Surfer magazine, for example, in the hopes of trying to bring the sport of surfing to the kingdom of Saudi Arabia. I have no idea how good though the waves are in Saudi Arabia," he says.

The effort hasn't been wholly successful. At a Group of 20 meeting in November 2018, pictures often showed Crown Prince Mohammed mostly isolated from world leaders, except Russia's Vladimir Putin, who gave him a hearty handshake. European countries including Germany have frozen arms sales to Saudi Arabia.

Yet in the U.S., the crown prince still has one key supporter — President Trump — who has even cast doubt on U.S. intelligence assessments that he played a role in Khashoggi's death. Congress, already trying to block weapons sales to Saudi Arabia over its role in the war in Yemen, increased those efforts after the killing. Trump has successfully vetoed them.

"The Saudis haven't actually paid a large price for the murder of Jamal Khashoggi," Freeman says.

But the Baker Institute's Ulrichsen believes ultimately Saudi Arabia may not enjoy this level of White House protection forever. "I think for the first time in recent history there's no bipartisan support in Congress or in the U.S. political spectrum for Saudi Arabia," Ulrichsen says. "That's going to be a concern because Trump won't be there forever to protect the crown prince."