Accessibility links
Review: 'Joker' Has Nothing To Say, And Says It Loudly Todd Phillips' film features a bravura central performance and a style that, while dutifully imitative, engenders a claustrophobic sense of dread. But it's all in service of precisely nothing. 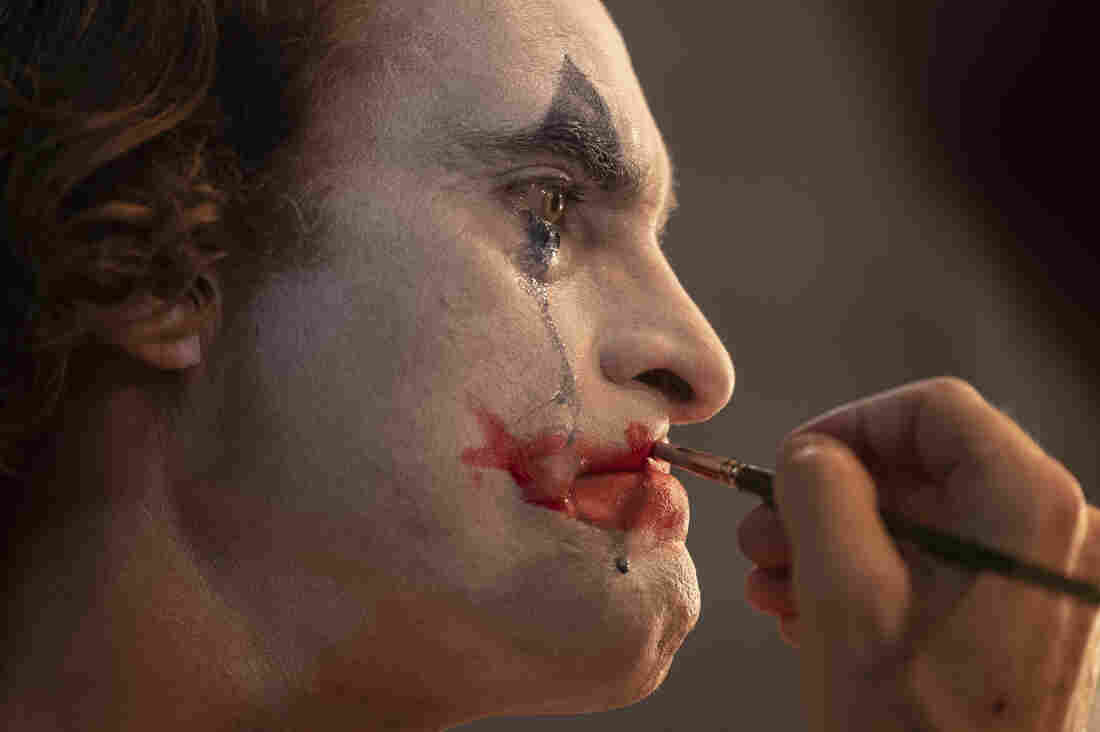 Why so serious?: In Joker, failing stand-up comedian Arthur Fleck, played by Joaquin Phoenix, is done being the butt of the joke. Niko Tavernise/Warner Bros. Entertainment Inc. hide caption 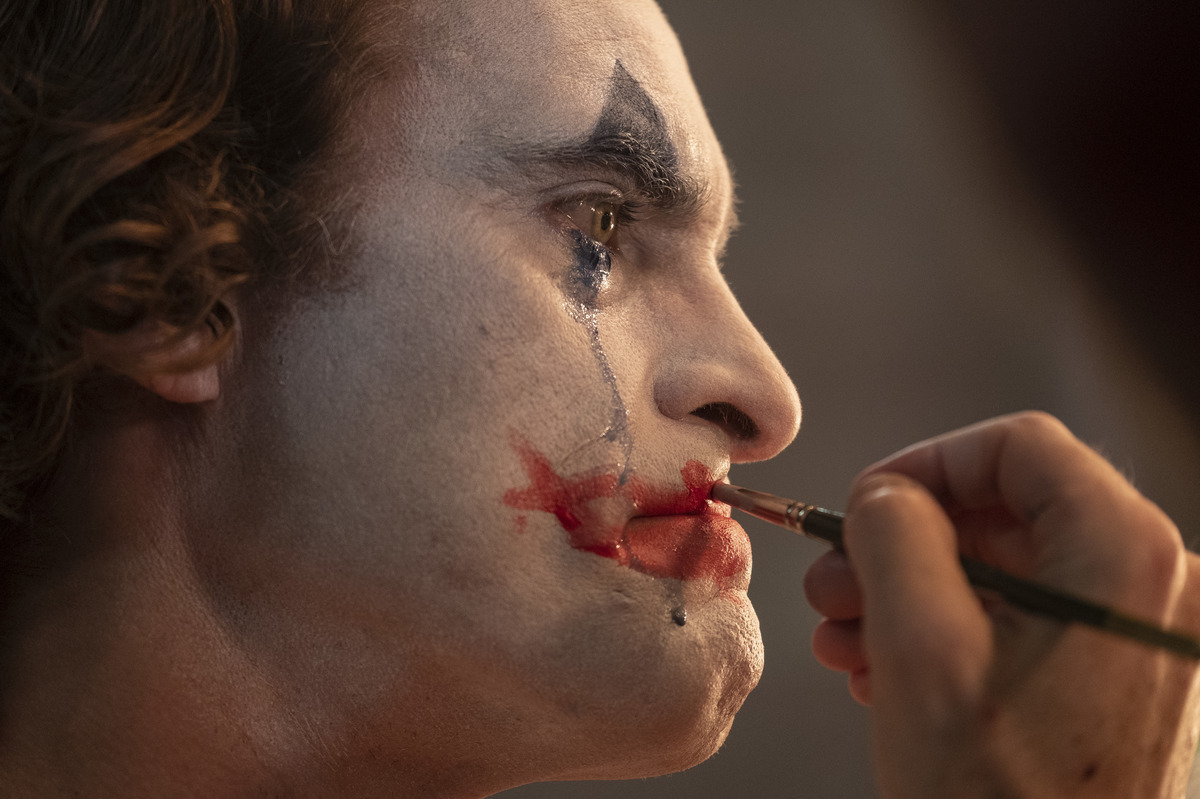 Why so serious?: In Joker, failing stand-up comedian Arthur Fleck, played by Joaquin Phoenix, is done being the butt of the joke.

In the comics and cartoons — and on film, as played by Jack Nicholson, Heath Ledger and (checks notes) Jared Leto — the Joker, Batman's archenemy, is an agent of chaos.

To be clear: It's a calculating, meticulously planned chaos. That speech Ledger's Joker gives in the hospital, in The Dark Knight? Where he says he's not a planner, he's just a "dog chasing cars?" Yeah, that's a lie. Because underneath that terrifying, physiology-defying grin and that laugh like a hyena on nitrous, there's a coldly cunning criminal mastermind — he's just hidden it behind his purple riverboat-gambler couture and his penchant for goofy, playing-card-themed capers, hoping you don't notice.

Funny thing about the Joker. (Historically, he's referred to as both The Joker and Joker — the definite article gets a lot less definitive around him, in much the same way it does around his opposite number, The Batman/Batman.) He's unique among Batman's rogues gallery. Penguin, Riddler, Catwoman, Clayface, Scarecrow — the whole lot: When they were first introduced in the comics, they were introduced by way of their origin stories. The reader encountered them embarked upon some act of moral turpitude and immediately learned their entire deal — their real name, their background and why they settled upon whichever absurd larcenous gimmick (birds, riddles, cats, etc.) that they did.

Not the Joker. When he debuted in 1940 — just one year after Batman's first appearance — he didn't waste our time whingeing on about his backstory; he just set to work killin' folk. It took an unprecedented 11 years for him to earn an origin tale — and even then, it was a half-assed one. We didn't learn his real name, or his background, just that he was a crook who had jumped into a vat of chemicals to escape capture by Batman, which transformed him into the grinning ghoul we know today, the Clown Prince of Crime.

It's that version of his origin story (others have been offered over the years) that writer Alan Moore and artist Brian Bolland made some tweaks to in 1988's unrelentingly grim The Killing Joke graphic novel, and that Tim Burton took up and played with — adding a generous dollop of Jack Nicholson — in 1989's Batman film.

Both attempts — and that original, 1951 origin tale — diminished the character. As a concept, the Joker is a beautiful (albeit vicious) butterfly; his colors dim once you pin him to the specimen board. He functions best as a symbol, an abstract representation — or more precisely a distillation — of the kind of random act of violence that birthed Batman in the first place. (Batman's parents were killed by a mugger, FYI. Don't know if you knew that. It's possible you've been sealed in a vault for the past 80 years, so just in case: alley, gun, pearls, it was a whole deal.)

He is a vector for disorder, for gleeful, heedless violence. If Batman is Merciless Order (he wasn't always, but he became so, around 1970), then Joker is Sadistic Chaos. He is Batman's perfect foil. He is, simply, The Adversary.

One of the many things Christopher Nolan's The Dark Knight got right about the character is that we only think we want to know who he is and where he came from. The Joker works best, most purely, when unencumbered by the humdrum of the everyday. His motivations must and should remain mysterious, unknowable.

Director Todd Phillips' new film seeks to strip all mystery from the character and make his motivations very knowable. And in that much at least, he succeeds.

Meet Arthur Fleck (Joaquin Phoenix), a down-on-his-luck clown for hire, only ... he's having a little trouble getting hired. Arthur has a condition that causes him to burst into laughter at random intervals, which tends to creep people out. And get him beaten up. A lot.

Arthur suffers one of his many onscreen beatings at the hands (and feet) of a bunch of Wall Street bros on the subway, who taunt him by singing "Send In The Clowns." Nearly in its entirety. (The scene goes on for a while.)

It's really the only time in this otherwise grounded, grim and gritty film that we're asked to suspend our disbelief at all — because, seriously, we're supposed to buy that a straight finance bro would be off-book on the second and third verses of a Sondheim number?

("Bro! I spent last night poundin' brews and fallin' down A Little Night Music YouTube wormhole! The Dench, bro! The Dench crushed it!" "Naw man, you gotta see my girl CZ-J in the 2009 Broadway revival, she makes Desiree's wry and winsome melancholy A THING YOU CAN FEEL IN YOUR 'NADS BRO.")

When the city cuts the funding for his social worker, Arthur goes off his meds and throws himself into his would-be stand-up comedy career.

It doesn't go well. Put it that way.

Joker is, ostensibly, a downfall story — a tale of how a broken man got broken in the first place. To make stories compelling, to keep audiences' interest when the conclusion is foregone, storytellers need to forgo what they know audiences already expect to see. But Phillips and his co-screenwriter Scott Silver aren't interested in iterating or innovating, because doing so would clash with their mission statement.

They want us to see Arthur as a victim, pushed into becoming a monster by his mental illness and a broken government. You may or may not find that prospect irresponsible, even dangerous. Let's leave that to social scientists. What I can tell you is that, as executed in Joker, it's wildly unconvincing and mundanely uninteresting.

Certainly, Joker is tense, grimy and claustrophobic, and Phoenix's performance is a big swing, and a risky one — the kind of big, risky swing that Oscar voters historically eat up with a big ol' spoon.

But the film so desperately strives to reject comic book trappings — so aches to be seen as edgy, provocative, serious, adult — that it simply apes the tone, style and content of other, better, edgier and more provocative films like Taxi Driver and The King of Comedy and Fight Club.

But those films had a point of view, they had something to say — they implicated us in their onscreen violence, in the bad choices their characters made.

Joker sees Arthur's transformation into a mass murderer as inevitable. It's not a choice; it's something the world does to him. As a result of his passivity, the story becomes little more than Arthur suffering a string of indignities until, one day, heroically (?), he doesn't anymore. It swiftly grows predictable, then repetitive, then dull.

But the film doesn't care — it's too busy exuding a sense of self-satisfaction, a preening, self-consciously provocative challenge to an audience — a humanity — it holds in pitched contempt.

Joker thinks of itself as urgent, relevant, of the moment and — mostly, unrelentingly — not just another silly superhero movie. Ultimately, however, it devotes so much of its energy into not being about a comic book villain that it neglects being about ... much of anything, really.