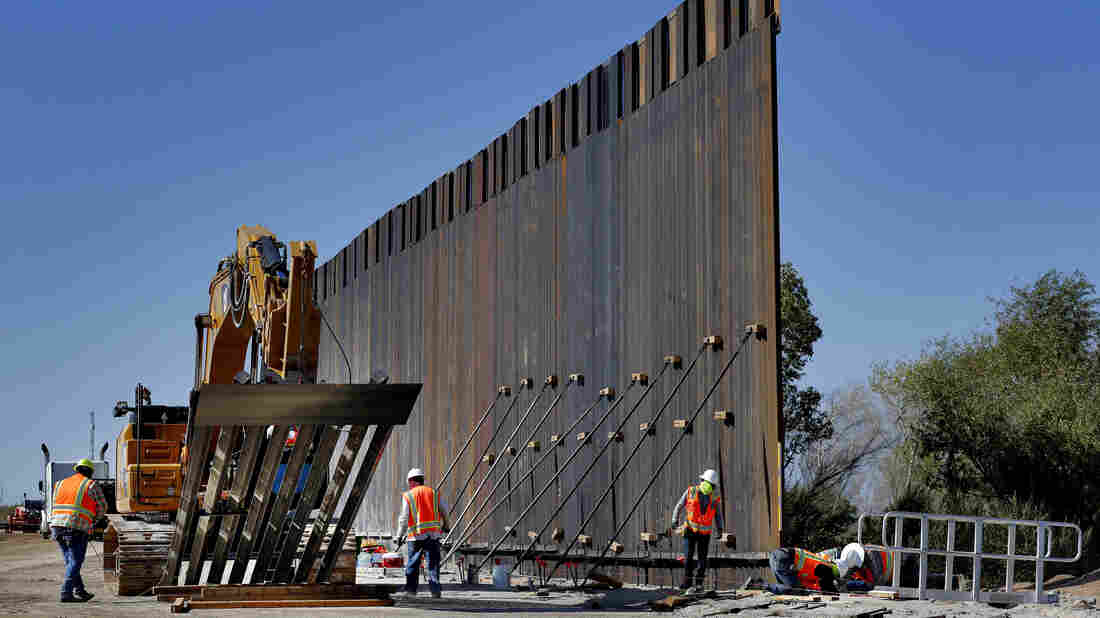 Government contractors erect a section of a Pentagon-funded border wall along the Colorado River in Yuma, Ariz., on Sept. 10. Matt York/AP hide caption 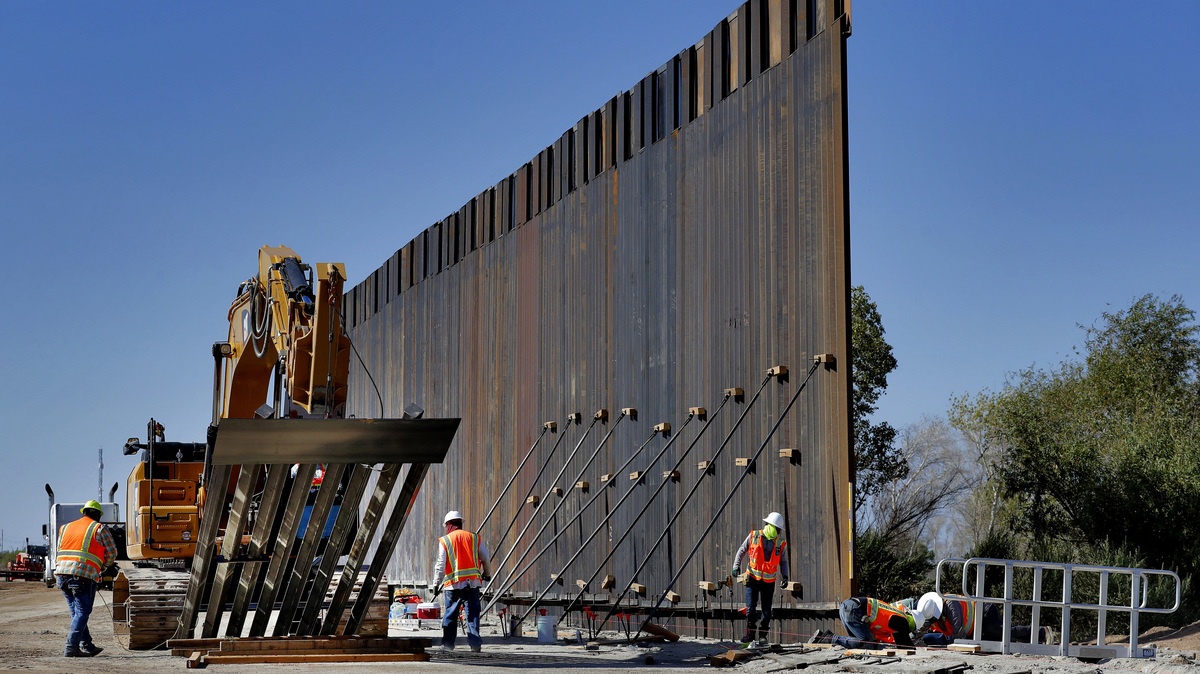 Government contractors erect a section of a Pentagon-funded border wall along the Colorado River in Yuma, Ariz., on Sept. 10.

President Trump made building a border wall between the U.S. and Mexico a cornerstone of his 2016 presidential campaign. But when, after the election, efforts to build the wall stalled, he turned to other possible options — including constructing a trench filled with snakes and alligators — according to a forthcoming book.

"He would raise this idea of a trench — and [that] maybe we could have a water-filled trench," New York Times journalist Julie Hirschfeld Davis tells Fresh Air. "And he raised [the idea] so many times that actually his aides finally went and got a cost estimate for what a trench would cost." Davis notes that thoughts of a border trench were cast aside after it was estimated that it would cost three times as much as a wall.

Davis and her Times colleague Michael Shear have covered the Trump administration from its earliest days. They chronicle the president's attempts to upend the nation's immigration system in their new book, Border Wars: Inside Trump's Assault on Immigration, publishing on Oct. 8.

According to Davis and Shear, Trump sees a border wall as something more than a physical barrier. "The wall, in his view, should not just be a structure that would stop people on the other side, but that anybody who tried to climb it would be hurt severely," Shear says.

To that end, they say, the president has proposed electrifying the wall or topping it with spikes and sharp concertina wire that would cut anyone who tried to climb it. He once suggested to now former Homeland Security Secretary Kirstjen Nielsen that the wall be painted a "flat black" that would heat up in the sun and burn anyone who touched it, they note.

Shear notes that when aides told Trump that they could not respond to rock throwing with lethal force, the president backed down — but only slightly.

"He suggested, 'Well, why don't we just shoot them in the leg? That'll slow them down,'" Shear says. "The aides sort of sat there kind of slack jawed and finally said to him, 'No, sir, you can't do that either.'" 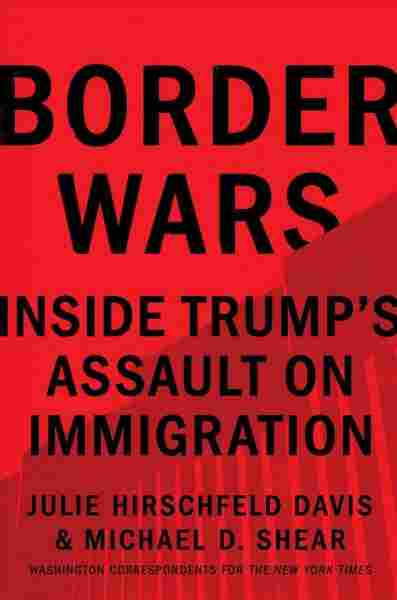 Inside Trump's Assault on Immigration

Shear: We talked to about 150 people, ultimately, for the book. And I think there were a lot of them that were inside the administration who sort of rationalized staying by thinking to themselves, 'If I leave, the person that he's going to get [as a replacement] is going to only be more willing to do the kinds of things that we don't think he can do.' And these were complicated people who both agreed, in some cases, with the end goal that the president might want to achieve. Meaning, for example, reducing the level of immigration, or making it harder for an asylum seeker to come into the United States. They were frustrated by the process and the means that the president reached for to do it. And they sort of decided to themselves, 'Well, if I leave, it's just more of a runway for him to do whatever the heck he wants, and so I'll stay and be that check.'

Shear: The president really is like a bully, and beats his own people into submission. [Nielsen] agonized over that policy, to be clear, not on moral grounds. In the month that the memo authorizing this was on her desk, we found little evidence that she struggled with whether it was right or wrong to separate families. In fact, what she struggled with was whether it could be done, whether it was practical, whether there would be all sorts of problems in the end. And the president and his aides just relentlessly beat her into submission. Not in a literal sense, but phone calls, repeatedly urging her, 'You've got to do this, get off your butt, the president wants this to happen, and you are the one standing in the way.'

We document a cabinet meeting in which he wanted to do all sorts of immigration things, closing the border down, and doing things that she kept saying to him in the middle of this cabinet meeting that he can't do. He absolutely relentlessly excoriated her in front of the entire cabinet for close to an hour, leading to her almost resigning right after that. And I think that's what happened in so many cases, is that they give up, and they just say, 'You know what? Fine, I'm going to sign the order.'

Davis: This was one of Stephen Miller's specialties, really, and it dates back to when he was on Capitol Hill and he used to circulate emails to journalists with all this very unfavorable data about immigrants and immigration and the effect on American citizens in the U.S. economy. But in the book we talk a lot about how Miller targeted the refugee resettlement program, and really had a goal of cutting down drastically on the amount of refugees that got admitted to the country every year. And one of the ways in which he tried to do that was to talk up the costs of the program and sort of escalate and intensify all of the fears that were out there particularly among the anti-immigration crowd about refugees and what threats they might pose to the country. So within this process as the National Security Council debated what the refugee ceiling should be for the coming fiscal year, Stephen Miller wanted to have a study that showed that refugees cost the economy a lot of money. And he also wanted data in there about the relatively larger threat they posed relative to other immigrants. The problem with both of those was that there was not government data to actually back that up.

On their goals when they interviewed Trump for the book

Davis: What we really wanted to hear him reflect on was whether he had any regrets about any of these policies or the way that they unfolded. This was at the time, when we went in to speak with him, when the pictures were just being released of all of the shelters with squalid conditions, with children who were dirty and didn't have the right supplies at the border. It was really a horrifying set of images that were coming out. And we really wanted to hear him grapple with what the results have been of his push for some of these policies. We wanted to hear him talk about that, and about whether he had any regrets about the family separation policy. And really whether he was at all concerned or afraid that his legacy on immigration was going to be one of having sort of totally reordered the country's values and made it a place that was not welcoming to immigrants. ...

And what was interesting was, he was very unwilling to grapple with any of those ideas. When he talked about the conditions at the border, he talked about, you know, [that] this is all Obama's fault. And the family separation thing that was just a policy that President Obama had in place, which, of course, is false. But he really seemed to be in a parallel universe when it came to what the real-world results had been of his agenda. And he had no regrets about the way that it played out — at least none that he would admit to.

Davis: We have not gone crazy. We've gotten everything in the book from multiple officials. But interestingly, when we have presented detailed accounts of what we learned to the White House both right before the book was submitted and right before this article was ready to go into the paper, we never got a denial. We never got any kind of dispute of the facts that we have in there.

Shear: And, in fact, the half-hour interview that we had with the president in the Oval Office back in June came after we had submitted a detailed list of scenes in the book — including the moat, and the alligators, and the snakes — to the White House. And he never raised it with us. So it's interesting that obviously now he's taking issue with it.

Sam Briger and Joel Wolfram produced and edited this interview for broadcast. Bridget Bentz, Seth Kelley and Meghan Sullivan adapted it for the Web.