Accessibility links
Face Masks In Hong Kong May Soon Be Banned It would be the first time in half a century that a chief executive has used those powers. News reports of the possible action emerged days after police shot a pro-democracy protester in the chest. 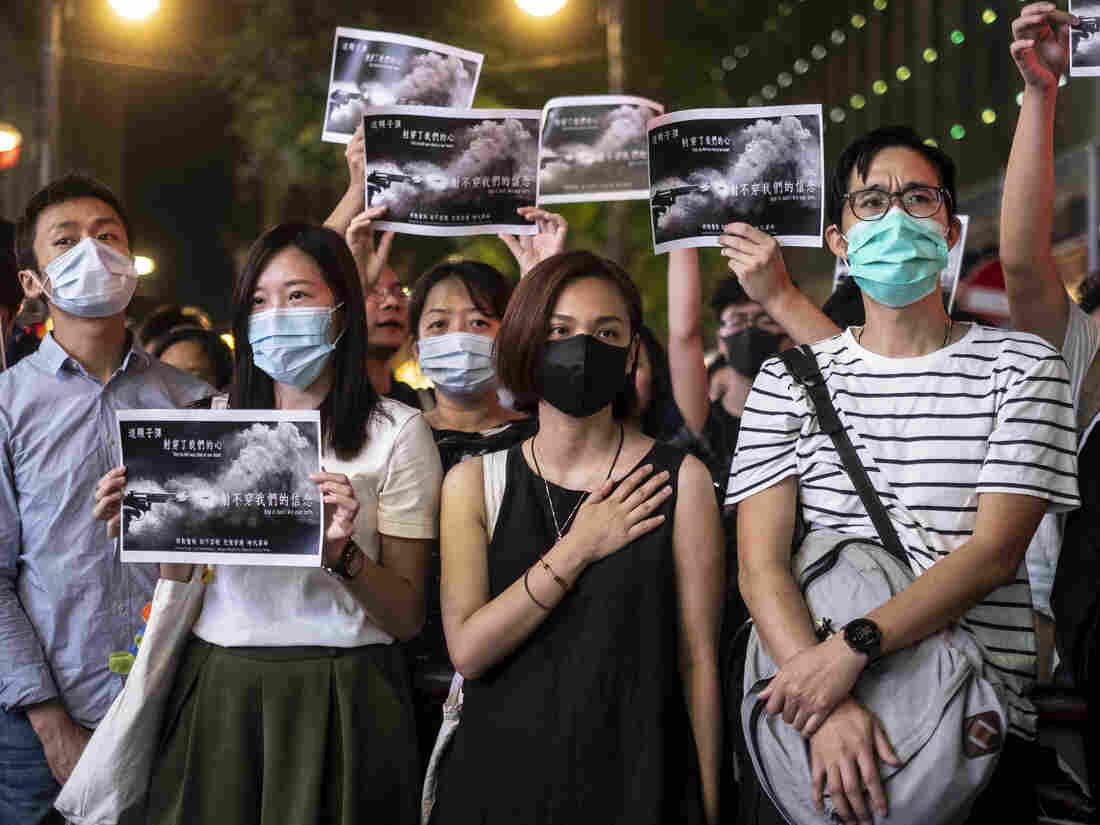 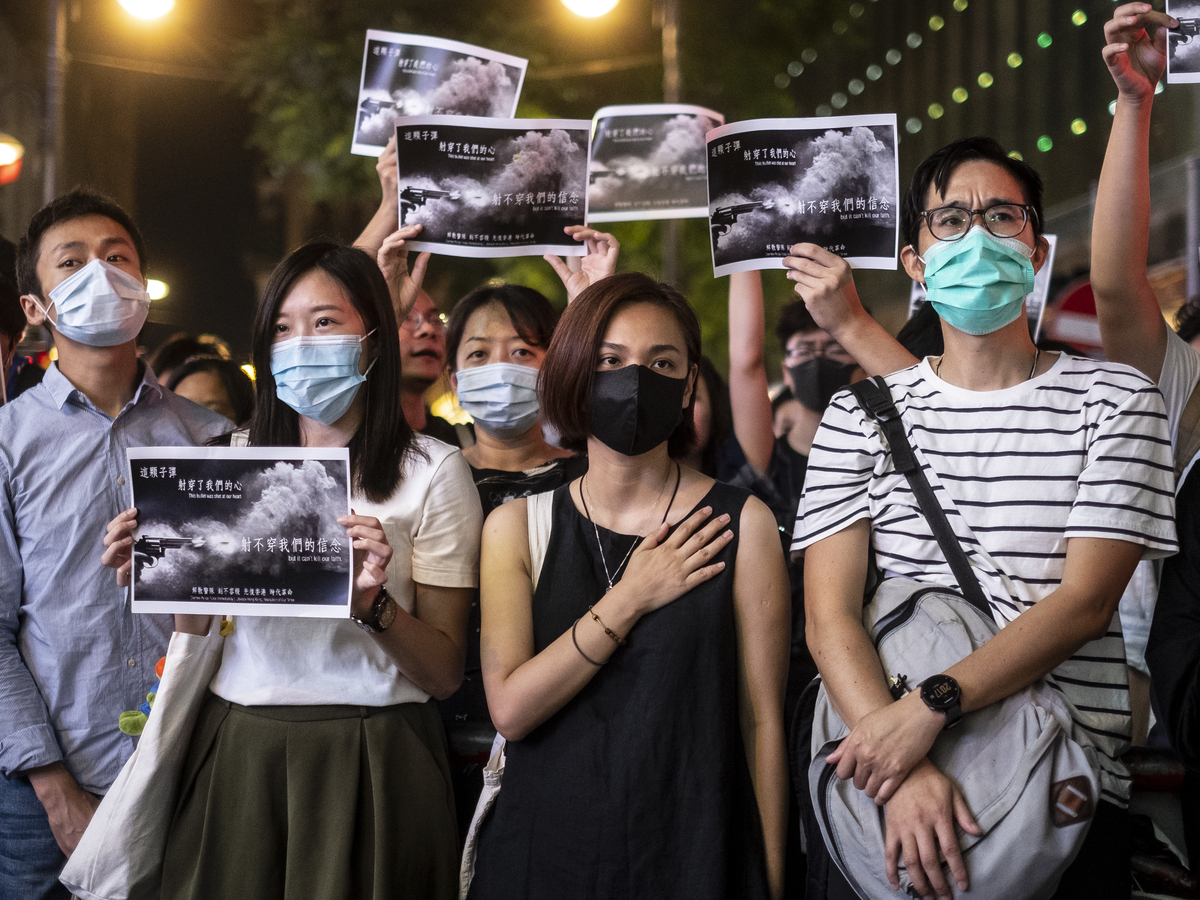 Hong Kong's government is set to invoke emergency powers it hasn't used in more than 50 years, as it moves to ban face masks. Here, demonstrators stand in Hong Kong's Causeway Bay to protest the police shooting of a young demonstrator.

Hong Kong's government is expected to take the rare step of invoking emergency powers on Friday so that it can enact a ban on face masks like the ones pro-democracy protesters have worn during months of demonstrations.

Media reports of the possible action emerged days after police shot a pro-democracy protester in the chest during an altercation, signaling a new escalation by authorities and bringing protesters' rage to new heights.

That demonstrator, identified as 18-year-old student Tsang Chi-kin, survived and was taken to the hospital. He now faces criminal charges of rioting and assaulting police officers. Video from the scene shows that he swung what appears to be a metal rod at the officer just before being shot Tuesday.

The shooting and mass protests in Hong Kong stood in stark contrast to celebrations that day in Beijing, as flag-waving crowds turned out to mark 70 years of Communist Party authoritarian rule.

If Hong Kong's leaders indeed use the emergency law to ban face masks, it would be the first time in half a century that a chief executive has used those powers, which date to 1922, when Hong Kong was under British rule.

The law allows the chief executive to wield broader authority if they see a need to act in the public interest during a time of emergency. The law, which evidently did not foresee the possibility that a woman might one day lead Hong Kong's government, states:

"On any occasion which the Chief Executive in Council may consider to be an occasion of emergency or public danger he may make any regulations whatsoever which he may consider desirable in the public interest."

The law gives Lam sweeping authority to enact orders and rules that might even go against existing rights and laws. The list of actions the executive can take ranges from "control and suppression of publications, writings, maps, plans, photographs" to "arrest, detention, exclusion and deportation" and the appropriation of property.

Lam would have sweeping authority to impose severe penalties on anyone who breaks the emergency regulations, ranging to up to life in prison — and excluding only the death penalty.

As news of the government's possible move spread, Hong Kong Legislative Council member Dennis Kwok Wing-hang warned that using the emergency measure would undermine the rule of law in Hong Kong — and would not end the call for a stronger democracy.

"They [the government] can use it to enact an anti-mask law now, the next thing is they are going to extend the detention period, and the next is they are going to further curtail the Hong Kong people's rights and freedoms, including canceling District Council elections, all in the name of using the emergency regulation," Kwok said, according to The Standard. "And that is our biggest fear."

Protesters regularly wear a range of face masks in Hong Kong, from Guy Fawkes masks to thin surgical-style coverings and respirator-equipped face masks — which have the dual benefit of combating tear gas fired by police and obscuring the demonstrators' identities.

During the months of demonstrations and physical clashes with police, protesters at the front lines have increasingly worn respirator masks with goggles, helmets and other tactical gear, along with the umbrellas that remain the hallmark of Hong Kongers' push for local control and direct democracy.

As for how long a ban on face masks and other actions could be enforced, the law doesn't put an expiration date on any emergency regulations, saying they should remain in effect until the chief executive repeals them.

The emergency law has been invoked only once in Hong Kong's history, in response to rioting in 1967. But such authority was a point of concern for human rights advocates in the late 1990s, who urged substantial revisions because, they said, the ordinance could be open to abuse when Hong Kong was handed back to China.

The Hong Kong Human Rights Monitor — a nongovernmental organization — said at the time that it was "very unsettling" that the measure lacks specific criteria for being invoked. The group added that attempts to amend the ordinance before the handover took place were only partially successful, as only the "draconian regulations made under it" were removed.

To make the case for banning face masks, a pro-Beijing group held a news briefing Thursday and declared that the ban is necessary because the protests have disrupted business and affected the livelihood of regular people.

The mass protests erupted in early June, when millions of people in Hong Kong took to the streets to demand that Lam withdraw a bill that would have allowed Hong Kongers accused of crimes to be extradited to mainland China to face trial.

Lam eventually agreed to that demand, but the pro-democracy movement says it still has five demands, including direct democratic elections to choose Hong Kong's next leader, and an independent investigation into police use of force against protesters.