Accessibility links
Brandt Jean's Act Of Grace Toward His Brother's Killer Sparks A Debate Over Forgiving "I'm proud of you my son, Brandt. Your load is lighter," Allison Jean wrote on Thursday, after her son forgave and hugged the woman who killed Botham Jean. 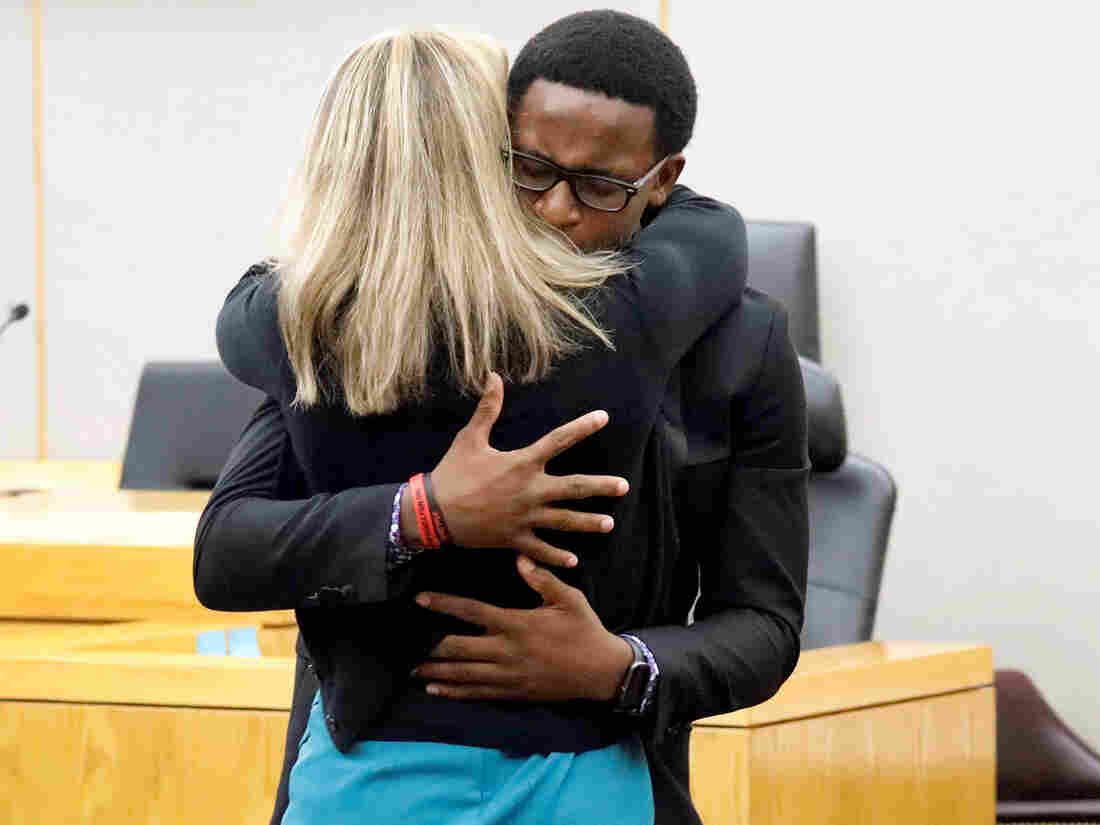 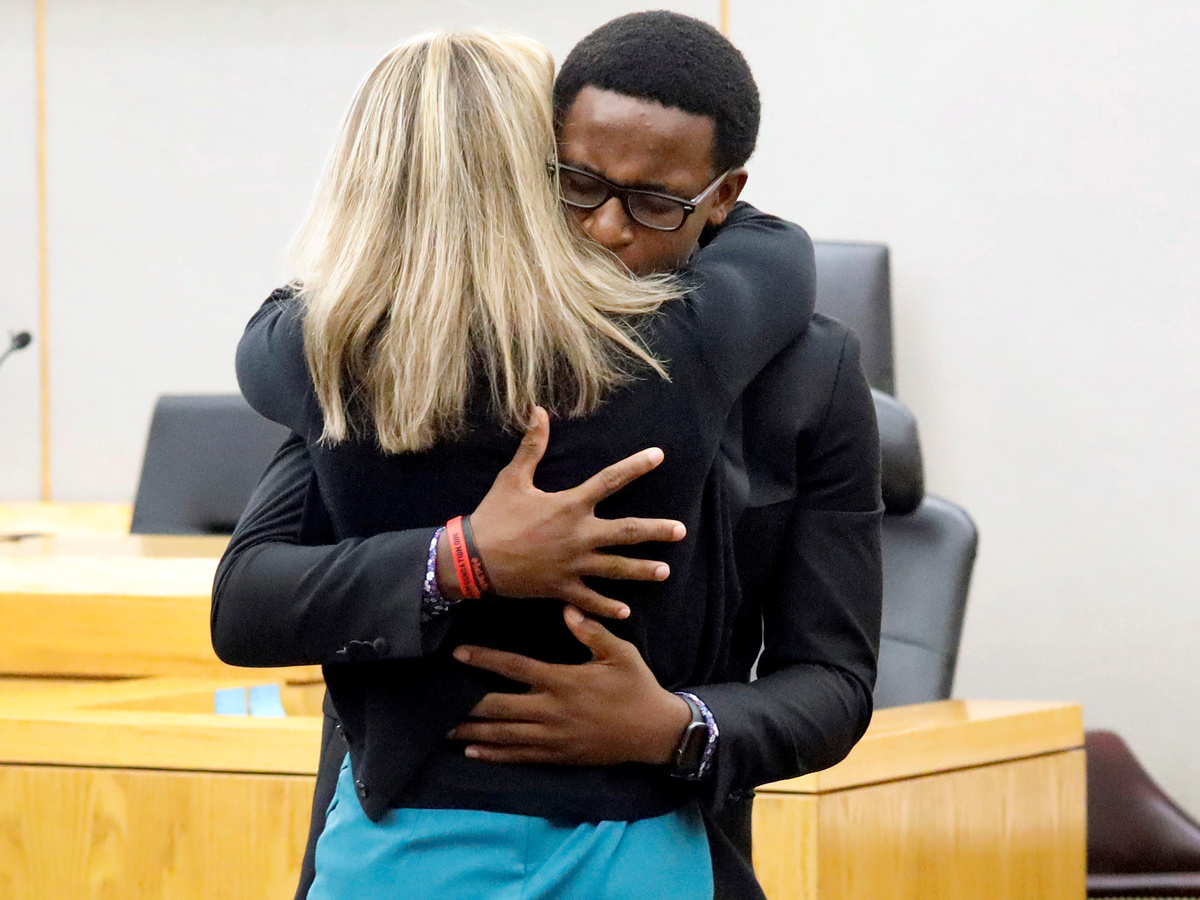 Brandt Jean's extraordinary response to a convicted murderer — he hugged Amber Guyger as she was sentenced for killing his brother, Botham Jean — has provoked an array of reactions, from admiration to frustration. It has also deepened a national debate over regulating police use of force.

In court, Brandt Jean, 18, used his victim-impact statement to tell the court that despite what Guyger took from his family, if she is truly sorry for what she did, then he forgives her and wants the best for her.

"I don't know if this is possible, but can I give her a hug, please?" Brandt Jean asked the judge, after telling Guyger that his main desire wasn't for her to go to jail but to "give your life to Christ."

As the two shared a tight hug, the courtroom was largely quiet except for the sounds of sobbing.

Footage of that moment put a dramatic and human light on what had already been a widely watched case, in which an off-duty white police officer shot and killed an innocent black man.

"This is a definition of living like Christ would like you to," Willy Orji said in reply to a widely watched video on Twitter. He added, "Vengeance is not ours. What a great gesture by Brandt."

On Thursday, the Jean brothers' mother left no doubt where she stands in what is essentially a debate over competing human impulses: the right to be angry and the need to forgive.

"I'm proud of you my son, Brandt. Your load is lighter," Allison Jean wrote on her Facebook page Thursday. She added, "Regardless of the views of the spectators, walk with God always. Forgiveness is for the forgiver and it doesn't matter what the forgiven does with it."

As for Guyger's 10-year prison sentence, Allison Jean said Wednesday that Guyger should use her prison time to reflect and change her life. And she called on the Dallas police force to change as well.

"There is much more to be done by the city of Dallas," Allison Jean said. "The corruption that we saw during this process must stop. And it must stop for you, because after now, I leave Dallas. But you live in Dallas."

The hug between Brandt Jean and Guyger was shortly followed by another unusual scene, as Judge Tammy Kemp stepped down from the bench so that she could hug Jean's mother. Kemp then hugged Guyger as well and handed her a Bible. For some, that embrace was too much.

"How Botham Jean's brother chooses to grieve is his business," Atlantic writer Jemele Hill wrote. "He's entitled to that. But this judge choosing to hug this woman is unacceptable."

Kemp's gift of the Bible and her urging Guyger to read specific passages was also unconstitutional because she was promoting her personal religious beliefs, according to a statement by the Freedom From Religion Foundation, a nonprofit that advocates for the separation of church and state.

The group filed a complaint with the Texas State Commission on Judicial Conduct.

Jacqueline Habersham, interim executive director for the Texas State Commission on Judicial Conduct, told NPR that confidentiality rules prohibit her from discussing even the agency's receiving of the complaint.

As people responded to Brandt Jean's selfless act of compassion, reactions in the courtroom and beyond were also mixed with anger over the 10-year prison sentence for Guyger, who could be released after just five years. She had been facing up to 99 years in prison.

"I have preached #forgiveness for 25 years, BUT using the willingness of Black people to forgive as an excuse to further victimize Black people is SINFUL," former NAACP President Cornell Brooks said in a tweet. Brooks, who also is an ordained minister in the African Methodist Episcopal Church, continued, "America should ask Black people forgiveness for serially asking African Americans to forgive sanctioned #PoliceBrutality."

While many people praise Brandt Jean, they also warn that his grace should not preclude a close examination of police shootings in the United States. And they're asking when black Americans will stop being asked to forgive violence committed against them. For some, the circumstances brought to mind an essay that Roxane Gay wrote about forgiveness in the aftermath of the deadly shooting at a historically black church in Charleston, S.C.

"Black people forgive because we need to survive," Gay wrote in 2015. "We have to forgive time and time again while racism or white silence in the face of racism continues to thrive."

"Black people forgive because we need to survive. We have to forgive time and time again while racism or white silence in the face of racism continues to thrive."

Words by the one and only @rgay https://t.co/gYlL7mPkvK

In that essay, Gay said that for her, the problem is when forgiveness is taken as absolution. And she concluded, "I, for one, am done forgiving."

The discussion about Guyger's sentence and Jean's act is taking place against a complicated backdrop in which white police officers have killed unarmed black men in a string of high-profile incidents in recent years.

"God bless #BothamJean's brother," wrote Bernice King, the youngest daughter of Martin Luther King Jr. and Coretta Scott King. "But don't confuse his forgiveness with absolving this nation for its gross, bitter discrimination against Black people in a myriad of its systems and policies. Racism and white supremacist ideology can't be 'hugged out.' "

God bless #BothamJean’s brother.
But don’t confuse his forgiveness with absolving this nation for its gross, bitter discrimination against Black people in a myriad of its systems and policies. Racism and white supremacist ideology can’t be “hugged out.” Do #BlackLivesMatter?

Discussing Jean's show of grace in court, the Rev. Al Sharpton recalled that he had forgiven a white man who had stabbed him — and that he saw parallels with what Jean did on Wednesday.

"I understood what that young man was doing. He did that statement for him, not for her, to show that he was a real Christian," Sharpton said on MSNBC. He added that while he disagrees with Guyger's sentence, he believes Jean offered the country a moment of healing by embracing the former police officer.

Guyger admitted to fatally shooting Botham Jean, 26, who was killed in his own apartment, where he'd been watching football on TV. At the time, she was still wearing her uniform as a Dallas police officer, having just come off a double shift. Guyger has said she entered Botham Jean's apartment by mistake — his unit was one floor directly above Guyger's in the same building.

"I hate that I have to live with this every single day of my life, and I ask God for forgiveness, and I hate myself every single day," Guyger said in her testimony. "I never wanted to take an innocent person's life. And I'm so sorry."

Even before Tuesday's verdict, critics had accused Dallas authorities of giving Guyger preferential treatment. Despite the circumstances of Botham Jean's death, Guyger was not arrested immediately. And while she was eventually fired from the police department and charged with murder, the initial charges against her were for manslaughter.