Accessibility links
How Penn State Is Cutting Greenhouse Emissions In Half — And Saving Money The university, which is as big as a city, has slashed its carbon emissions since 2004. That effort is now paying for itself in lower energy costs. Could actual cities do the same? 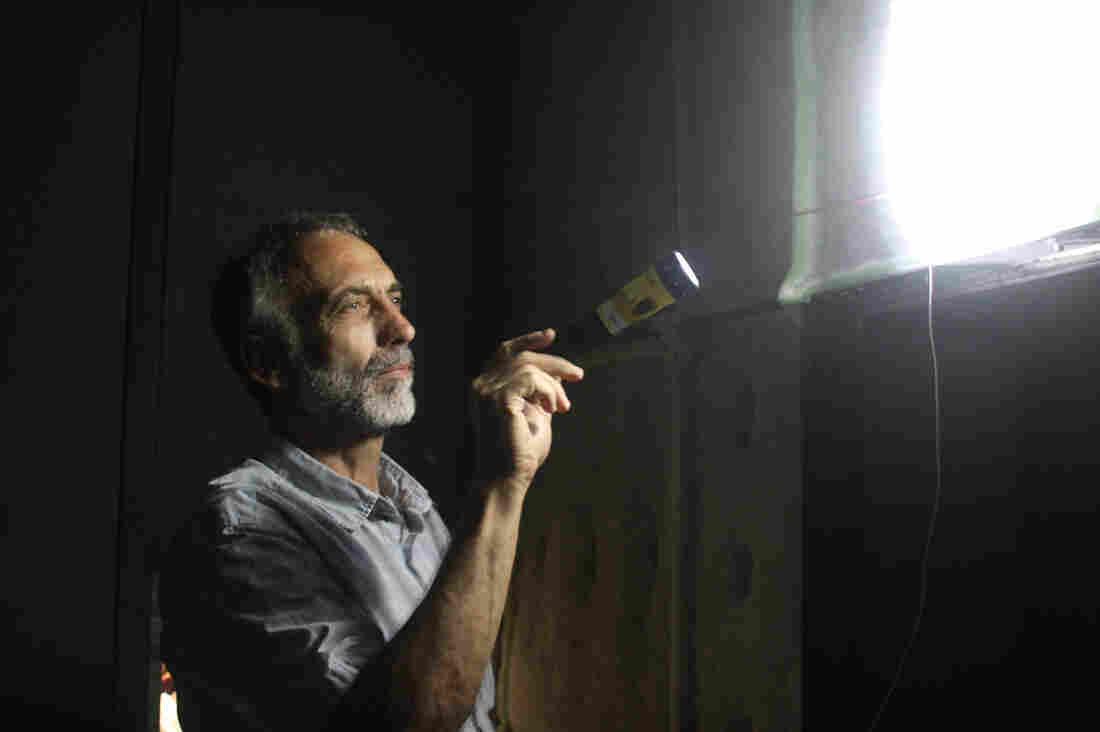 John Deffenbaugh, an engineer in Penn State's Office of the Physical Plant, checks the air-handling system in one of the university's buildings. It's one key to reducing energy use and greenhouse emissions. Dan Charles/NPR hide caption 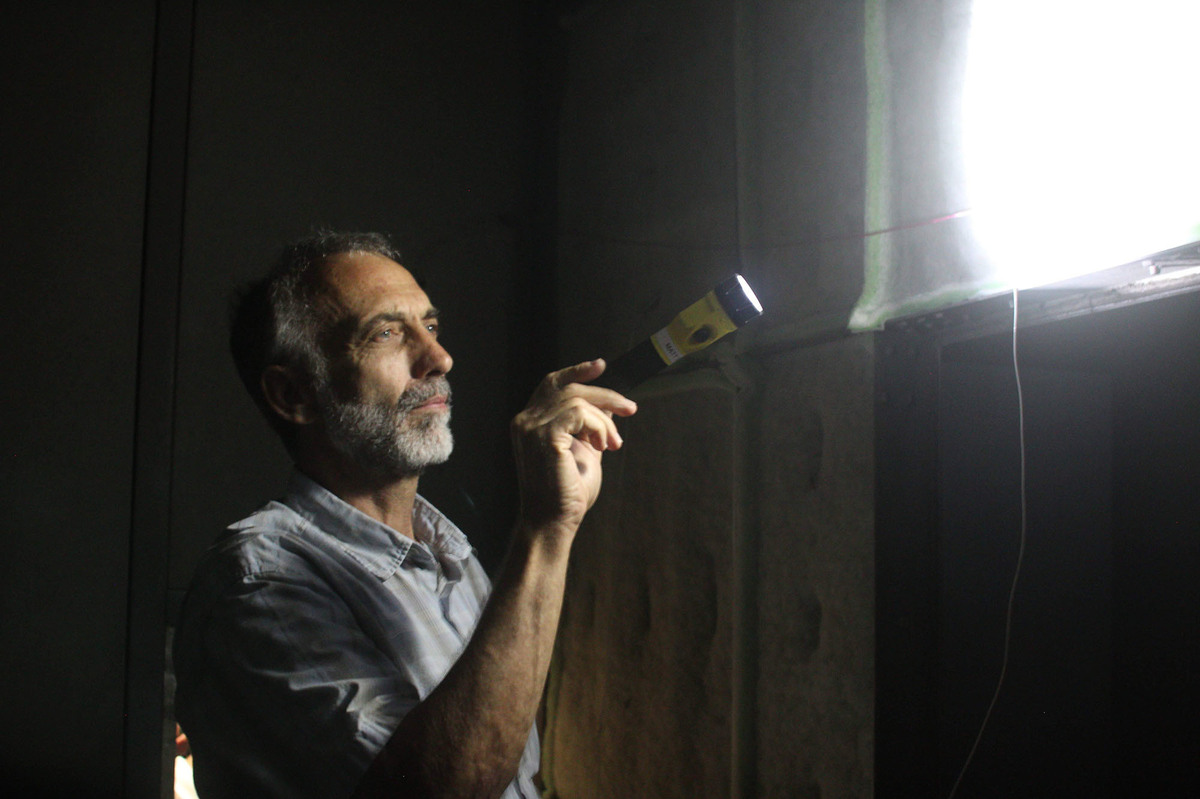 John Deffenbaugh, an engineer in Penn State's Office of the Physical Plant, checks the air-handling system in one of the university's buildings. It's one key to reducing energy use and greenhouse emissions.

In the struggle to end global warming, one community in central Pennsylvania is having remarkable success. It's growing, with tens of thousands of people, yet its greenhouse emissions have been dropping dramatically.

Perhaps most amazing: Those reductions have paid for themselves.

This is not your typical town — it's Penn State University. But in many ways, it's just like any other town or small city.

"We've got 600 major buildings here, over 22 million square feet," says Rob Cooper, Penn State's senior director of engineering and energy. "We have our own water system, our own wastewater plant." Most buildings are heated by steam from two gas-burning plants, delivered through miles of underground pipes.

Like most U.S. cities, this enterprise runs largely on fossil fuels, releasing hundreds of thousands of tons of carbon dioxide every year. The planet-warming gas comes from the steam plants, from power stations far away that supply electricity, from the cars that people drive to campus and from aircraft that faculty members take to conferences. 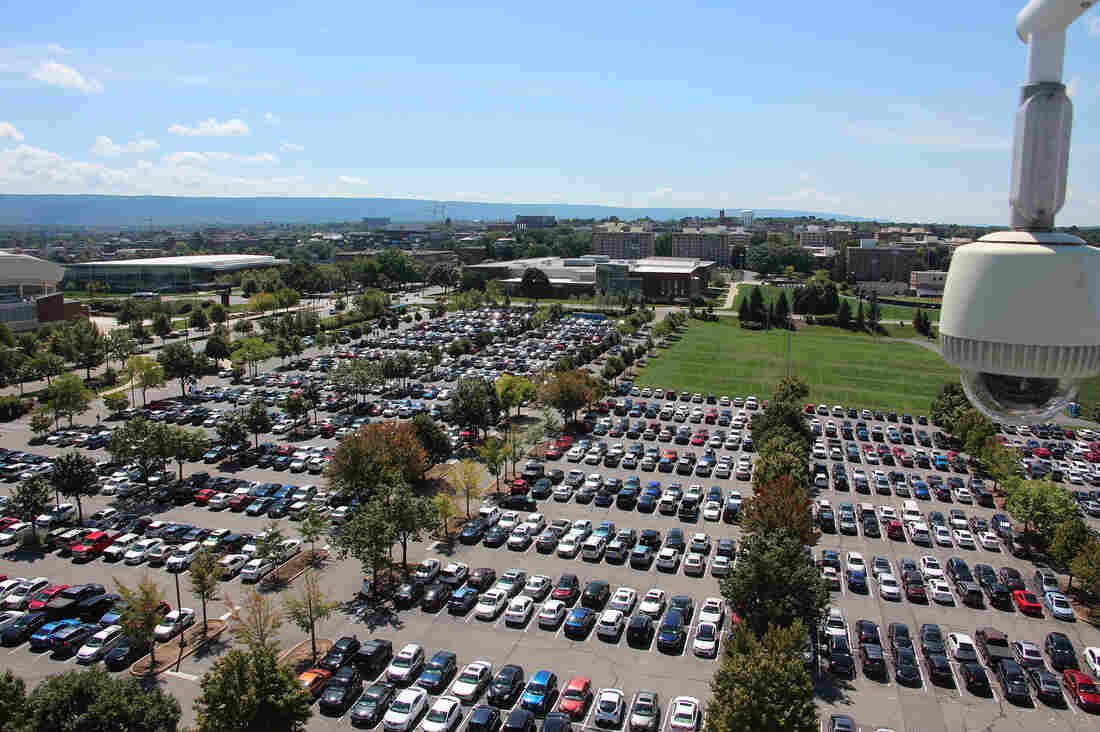 From the top of Beaver Stadium, one of the biggest stadiums in the world, it's possible to see just part of Penn State's central campus in State College, Pa. Dan Charles/NPR hide caption 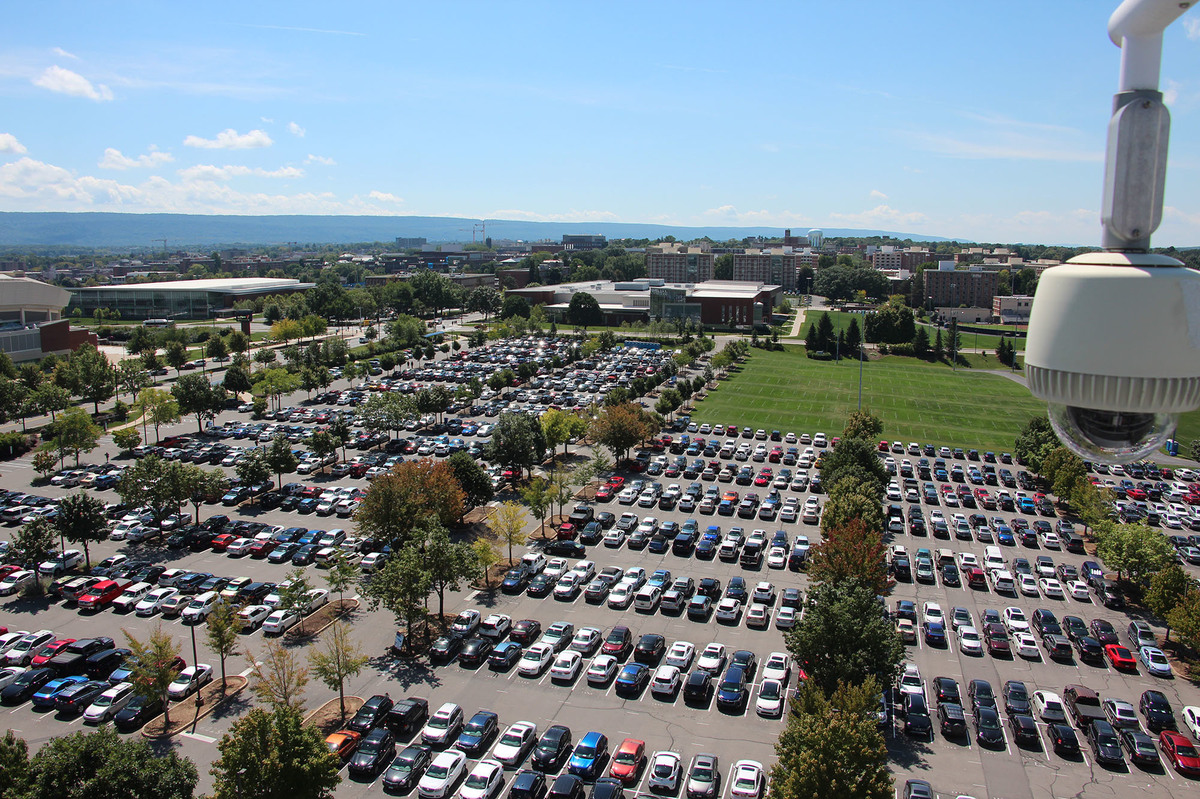 From the top of Beaver Stadium, one of the biggest stadiums in the world, it's possible to see just part of Penn State's central campus in State College, Pa.

Penn State has calculated those emissions, year by year, over the past 25 years and laid them out on a graph. It tells a startling — and hopeful — story.

Twenty years ago, the line was going up sharply. The university was growing, with more people and more buildings. It was burning more and more coal and gas — just like the rest of America.

Then, in 2004, the line suddenly changed direction. It started falling like a rock rolling down a mountain. And it has been falling ever since, even though the university is growing.

So how did Penn State succeed when the rest of the country has struggled to reduce its greenhouse emissions?

It started, according to several old-timers on campus, with a few students, faculty members and administrators who wanted to make the campus a greener place.

In the mid-1990s, when Penn State's greenhouse emissions were still soaring, biology professor Christopher Uhl helped to organize a small environmental movement on campus. It focused on the university's own operations.

Students calculated greenhouse emissions from specific buildings, looked at technical alternatives and gave the university mostly poor grades for its environmental performance. "In a sense, we're using the university culture," Uhl says. "It's data that will speak to an academic institution, not, you know, 'You should do this.'

"When we unveiled these different reports, we would meet on the the steps of Old Main, which is like this big center of the university," he adds. "Lots of people showed up. The press was there."

They were engineers and maintenance staff at the university's Office of Physical Plant, people who typically go unnoticed until something breaks. They were led by a retired Navy officer named Ford Stryker.

"I always cared about environmental issues," says Stryker. "We'd seen a lot of evidence that global warming was a real thing, and we were concerned about it."

Stryker pulled off a classic bureaucratic move. He persuaded the university president to declare "environmental stewardship" an official priority. It gave him leverage with other parts of the administration.

He got Penn State's budget and finance offices to set up a revolving fund to pay for upgrades that cut greenhouse emissions. These were loans that had to be paid back, with interest. "It took a while to get the finance guys to agree," Stryker says with a chuckle. "We had to demonstrate that we were actually saving money."

This, in fact, is what reversed that rising line on the graph of greenhouse emissions: a whole bunch of projects that cut the university's demand for energy. Most of them paid for themselves within 10 years through lower energy bills.

Some of these projects are surprisingly low-tech, like tuning up heating and air conditioning systems, measuring air flow and temperature, making sure enough air is flowing to keep people comfortable but not so much that extra steam is needed to keep everyone warm. "You don't open the door of your house on a zero-degree day, right? We don't want to do that, either," says John Deffenbaugh, the engineer in charge of the program that gives Penn State's buildings regular checkups.

"You'd be surprised what you find when you tune up a building's HVAC system," says Cooper, the head of of engineering and energy. "It's one of the shortest paybacks. It's consistently three to five years [to recoup the costs] on every building that we go into." 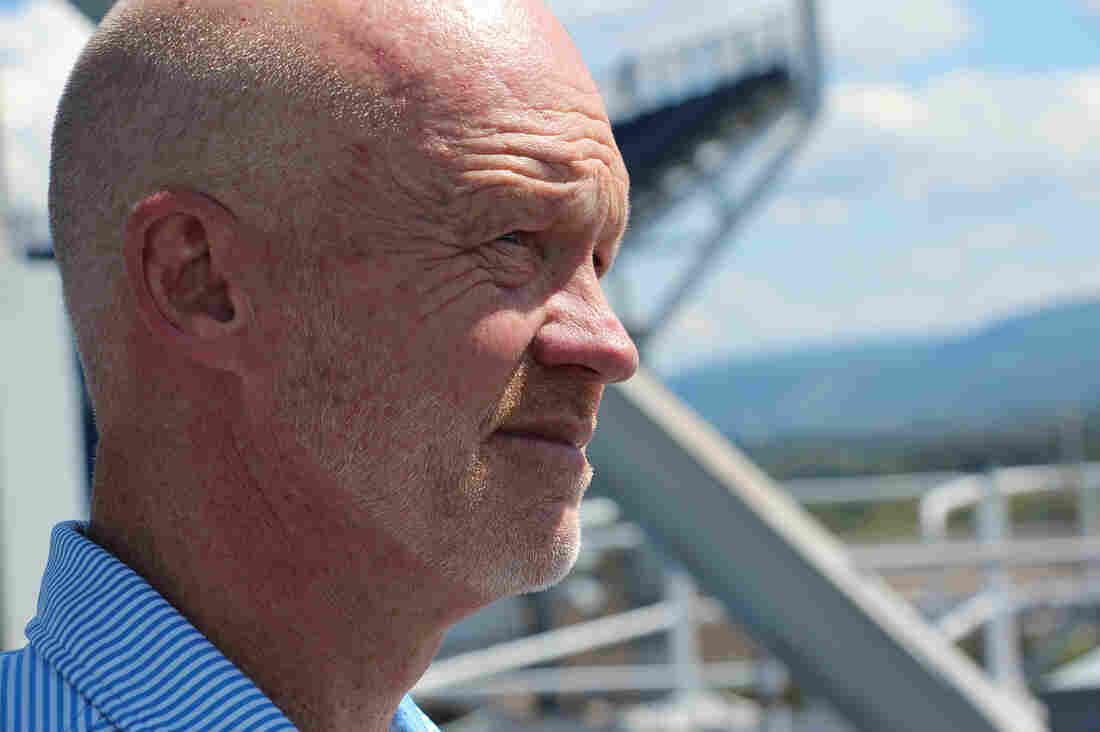 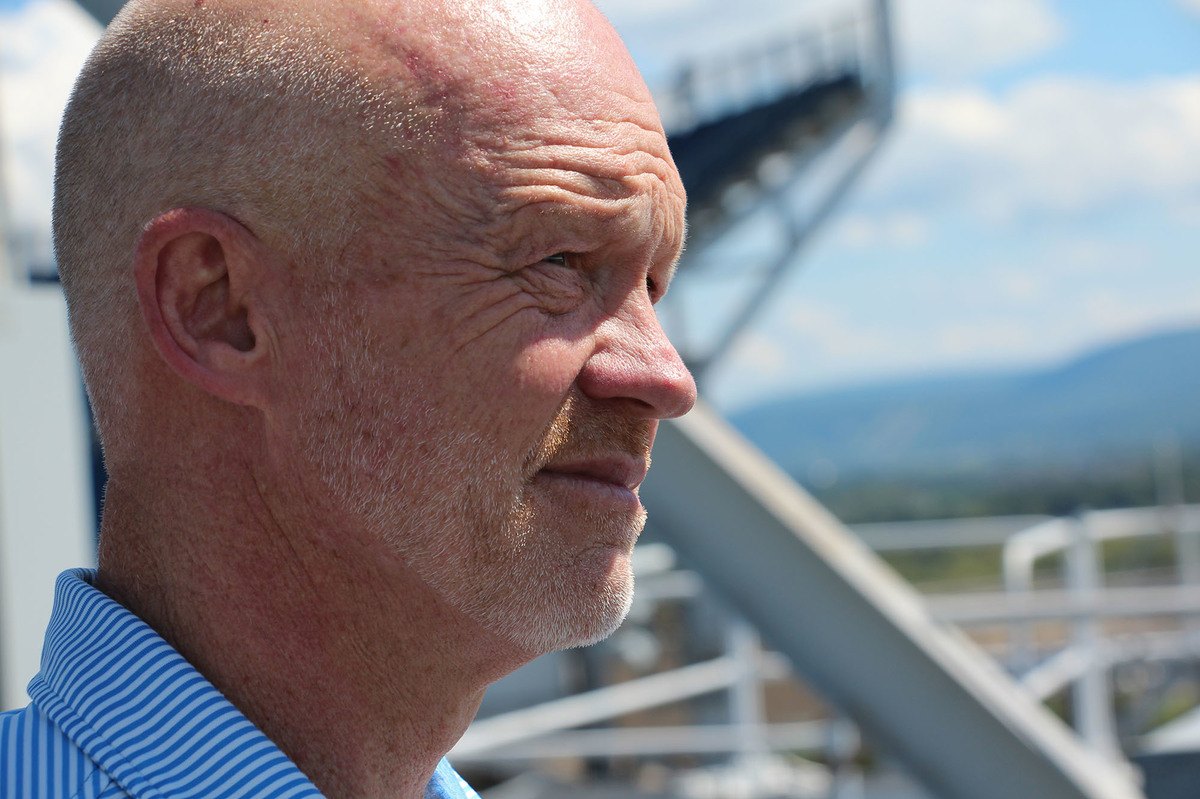 Penn State also switched the fuel in its central heating plant from coal to natural gas, which releases less carbon dioxide when burned. Engineers installed energy-saving motors and windows whenever they could justify spending the extra money.

This year, with the cost of solar power falling sharply, Penn State signed a deal to buy electricity from a new 500-acre solar farm in Pennsylvania's Franklin County.

"Every time we looked at [solar power] before, the economics weren't there," says Andrew Gutberlet, Penn State's manager of engineering services. "We could not get solar power, or any renewable power, for less than what we were buying it for off the grid. Until now."

Penn State's greenhouse emissions are now down by a third, compared with the peak in 2004. In a few years, with solar power rolling in, they will likely be down by almost 50%. (For comparison, total carbon dioxide emissions from burning fossil fuels in the U.S. peaked in 2007 and have since fallen by 12%.)

Many other universities are on the same path. Some have promised to eliminate greenhouse emissions entirely by 2050. American University, in Washington, D.C., announced last year that it is already "carbon neutral."

Penn State's efforts, however, are particularly notable. The university is huge, it has documented its emissions carefully, and it has not resorted to "carbon offsets" that cancel out emissions by capturing carbon dioxide elsewhere, such as by planting trees. Plus, it's doing this on a tight budget.

In principle, any city could follow Penn State's example. As Gutberlet puts it: "We are demonstrating that this can be done."

Its experience, however, also offers two notes of caution.

First, Penn State isn't a regular city. "We are the creators of the heating energy and the consumers of the heating energy. We can take a holistic view of the entire process," Gutberlet says. The university also can afford to take the long view, making decisions that take 10 years to pay off. Many homeowners and businesses can not.

Second, cutting emissions in half is good, but it's not enough to stop global warming.

Penn State actually has a more ambitious goal: an 80% cut in greenhouse emissions by 2050. Some people on campus are pushing to cut those emissions to zero.

Will they actually meet that goal? "We need to!" says Shelley McKeague, the person in Penn State's administration who's responsible for monitoring the university's greenhouse emissions. "Do we have a concrete plan to get there? We do not, and the reality is, the country doesn't either."

They're looking at lots of possibilities, Cooper says. More solar power, new ways to store the clean power so it's available when needed. Hydrogen-powered fuel cells. Super-efficient buildings. A massive reconstruction of the heating system.

"We have options in front of us," he says. "We just don't know which ones we'll pull the trigger on yet."