Accessibility links
Review: 'The Seventh Voyage,' By Stanislaw Lem And Jon J. Muth Graphic novelist and illustrator Jon J. Muth's dreamy paintings expand the scope of Stanislaw Lem's story about an astronaut in a cramped one-man spaceship, who finds himself stuck in a time loop.

'The Seventh Voyage' Takes A Grand Journey In A Tiny Spaceship

'The Seventh Voyage' Takes A Grand Journey In A Tiny Spaceship 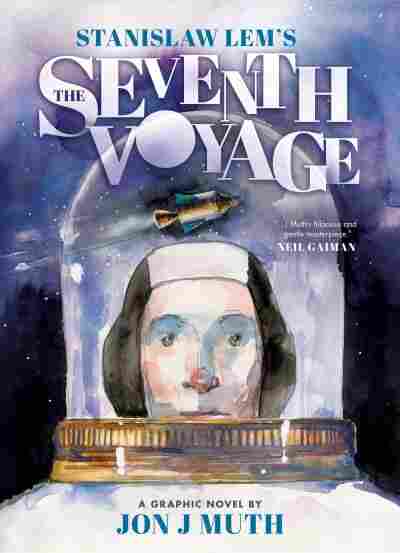 One of the really neat things about comic artists is their ability to make small stories into big ones. Stanislaw Lem's 1976 tale "The Seventh Voyage" is small in various ways: Besides taking place inside a cramped spaceship and featuring only one character (well, sort of), it's quite short and is told in a wry, dialed-down tone that comes close to disguising just how funny it is. In the hands of Jon J. Muth, though, every tiny development in Lem's plot becomes the catalyst for a painting showing a slightly different perspective on the action. With every turn of the page this small story gains new detail and becomes more tangible. It becomes a place you can stay a while.

That's quite an achievement, but it's not too surprising considering Muth's resume. Besides winning acclaim for drawing graphic novels, he's known for authoring children's books — another genre in which a small story can be transformed in remarkable, often unforeseen ways by a skilled artist. Here, Muth demonstrates the ability he showed in books like The Three Questions and the Caldecott-winning Zen Shorts not just to illuminate and explore all the layers of meaning hidden in a story, but to multiply those layers through art. Even though The Seventh Voyage is being marketed as a preteen title, there's plenty here to divert adult readers. That's true narratively as well as graphically. Lem, after all, is a famously sophisticated storyteller even when he's deliberately keeping his focus narrow.

The narrow focus of The Seventh Voyage is actually the jumping-off point for the story's complex running joke. Narrator Ijon Tichy has been journeying for two years alone in his rocket ship, en route from Earth to a distant constellation, when a tiny fragment of debris shatters his drive regulator and part of his rudder. As he struggles to fix the damage, his ship zooms uncontrollably into a field of mysterious gravitational vortices. These, his space almanac warns, can trigger "incalculable relativistic effects — particularly when traveling at high velocities."

With every turn of the page this small story gains new detail and becomes more tangible. It becomes a place you can stay a while.

And indeed they do. Tichy's first clue that something is amiss comes when he's visited in the middle of the night by a man claiming to be himself. The "stubborn apparition" has an hourglass-shaped birthmark on his left buttock that matches Tichy's own. Even so, Tichy writes it off as a dream — until he sees "himself" again, this time wearing an apron and making an omelet. Soon other Tichys start appearing, each a version of the protagonist from another point in time, and it turns out that a one-man story can be crowded indeed. "The cabin was packed with people. There was barely elbow room," Tichy says. "They began to quarrel, argue, bicker and debate ... I ... succeeded in organizing something that resembled a meeting, in which the one from next year — having seniority — was elected chairman by acclamation. We then appointed an elective committee, a nominating committee, and a committee for new business, and four of us from next month were made sergeants at arms." And yet for all his efforts, Tichy can't manage to get his selves to cooperate in fixing the ship.

Crowds of relativistically replicating protagonists are a fun assignment for any illustrator, but Muth shows his skill even before he's called to differentiate dozens of Tichys. His soft-edged paintings gently mock the notion of space travel as a high-tech fantasy, even as Lem's text mocks the concept of the heroic solo space traveler. The spaceship is a poky little affair fitted, per Lem's description, with ordinary furniture. Tichy reads The General Theory of Relativity in an easy chair, wears two-tone socks under his spacesuit and cooks up a steak in a cast-iron pan. Even the starkly drawn opening pages, which show the meteor zooming through space toward Tichy's ship, are a subtle comment on the reader's assumptions about the majesty of space. At first the meteor is drawn to appear huge — a great uneven boulder soaring toward the tiny craft — and it's only after a few panels that we realize it's actually "no larger than a lima bean." The teasing sequence is the perfect way to open a story that upends sci-fi fantasies of individual heroism.

In an afterword, Muth tells how he came to love sci-fi as a child, eventually discovering Lem's masterwork Solaris. "This book was ... another way of thinking about everything," he writes, adding, "much of Lem's writing explores how oblivious we are to our limits." It's somewhat ironic, then, that Muth's artwork should have such an expansive effect on Lem's small story. Even as it plays with the importance of limits, The Seventh Voyage also pushes them.