Accessibility links
Review: 'Thirteen Doors, Wolves Behind Them All,' By Laura Ruby Laura Ruby's new young adult novel, set just during the Depression, follows a young girl and her sister who are trying to survive a stark orphanage — and attracting the attention of its local ghost. 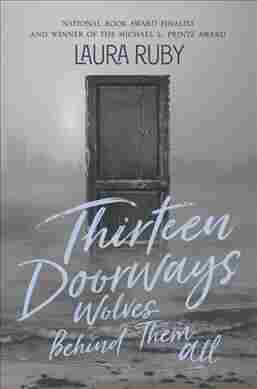 Thirteen Doorways, Wolves Behind Them All

Title
Thirteen Doorways, Wolves Behind Them All
Author
Laura Ruby

Printz Award winner Laura Ruby returns with a new Depression-era young adult drama that poses a question: When there are wolves behind all the doors, how do we find the courage to open them anyway?

Frankie isn't an orphan — her father is very much alive — but she lives with her brother and sister at an orphanage in Chicago. Her father left them there once her mother was gone. She keeps thinking that one day, he'll take them home again. When he turns up to visit with train tickets West, she thinks things are finally looking up. But then it turns out that there aren't any tickets for Frankie or her sister. Only her brother is joining her father's new family, and Frankie and her sister are left behind, abandoned indefinitely.

Still, the orphanage isn't all bad. Sure, Sister George is a terror, and the food is inedible, and all the girls get their hair shorn off to deter lice. But there are good things, too. Sister Bert is kind, and Frankie has her pals and her routines, and best of all, there's a boy on the forbidden side of the yard who sometimes smiles at her. Sam. Maybe, if they can find a way to be together, life might one day prove worth living for.

But then the bombs fall at Pearl Harbor, and the world turns upside down.

Wait, did I mention this is a ghost story? Or, more accurately, a ghost's story?

A spirit wanders the halls of the orphanage. Pearl whispers to the girls and tickles the babies and wonders about the other ghosts she encounters. Most of all, she watches Frankie. There's something about Frankie that pushes Pearl a little closer to life. As she tells us Frankie's story, she circles her own and begins to remember all things that she's forgotten. Both girls face terrible consequences for daring to find love, and as Frankie strives to make a life for herself in a broken world, Pearl struggles to come to terms with the hardships that ended her own.

Even though this is not a book with an intense plot driving it along, or tensions that catapult the reader from one scene to the next, I found myself quite riveted.

It's not difficult to understand how Pearl's ghost becomes obsessed with life at Frankie's orphanage. While reading Thirteen Doorways, I felt caught there myself, peering in at the girls through grey-tinted glass. Frankie's world is stark but vivid, full of prohibitions and cruelties both big and small, and words and feelings swallowed down because it's safer than speaking them aloud. Frankie is a bright but tiny flame of unexpressed longing and rage, and Pearl warms her ghostly hands against the fire, hoping it will flare up and burn through her as well.

The fact is, Pearl starts out by acting as a sort of voyeur, unable to offer Frankie either comfort or reproach. This feeling of helplessness is part of the point, I think. Girls are constantly told to want less, to lower expectations, to take up less space, and to accept violence and cruelty as a foregone conclusion. Pearl can't protect Frankie, and neither can we — all we can do is bear witness and will her to find the strength to choose something better for herself.

Here Are The Nominees For The 2019 National Book Awards

Even though this is not a book with an intense plot driving it along, or tensions that catapult the reader from one scene to the next, I found myself quite riveted — or perhaps immersed is a better way to describe it. Even when I put it down, Thirteen Doorways' moody miasma lingered, pulling me back in. It's a story that kept happening in the back of my mind, even when I wasn't reading. It has a certain, dream-like quality, like a memory half-forgotten or a story repeated so often that it becomes reality.

It's certainly evident that Ruby is a skilled hand at creating an evocative narrative tapestry. Her history-infused details feel achingly real — which makes good sense, given that in the author's note, we find out she is drawing directly from her mother-in-law's experience growing up in a Chicago orphanage — but seen through the fractured prism of Pearl's psyche, everything fragments and reflects. Instead of creating distance from the story, this will draw readers in, allowing them to layer their own experiences over this framework of girls daring to ask for more from life than they are told they should expect or deserve.

There may be wolves behind all the doors, but there is also a whole world beyond for those bold enough to push them wide.