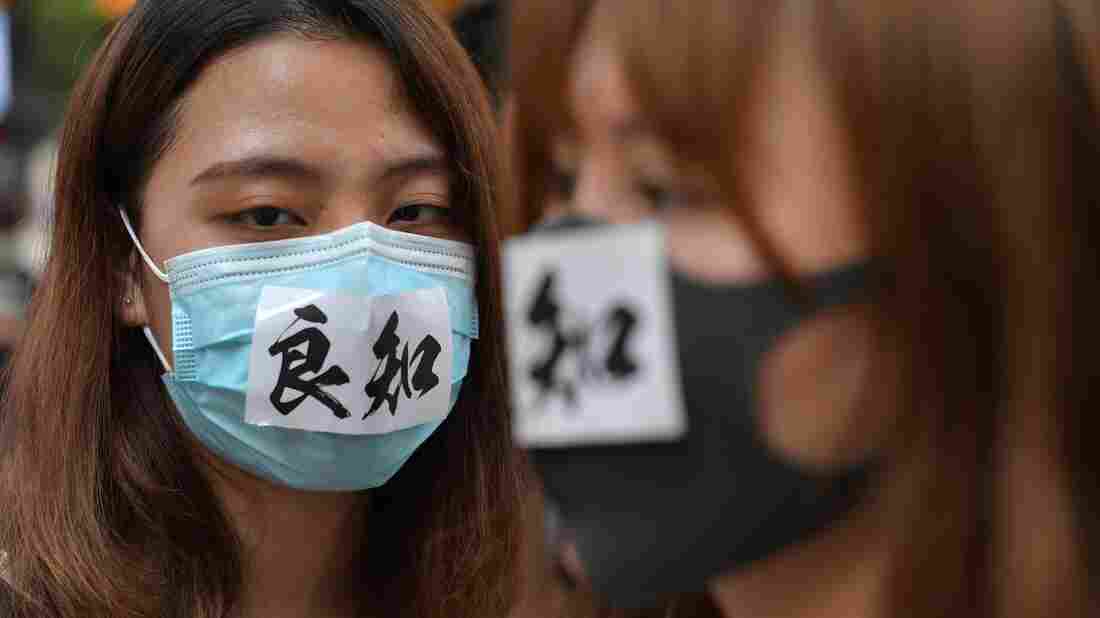 A woman wearing a face mask with the characters meaning "conscience" takes part in a protest against a government ban on protesters wearing face masks in Hong Kong on Friday. Nicolas Asfouri/AFP via Getty Images hide caption 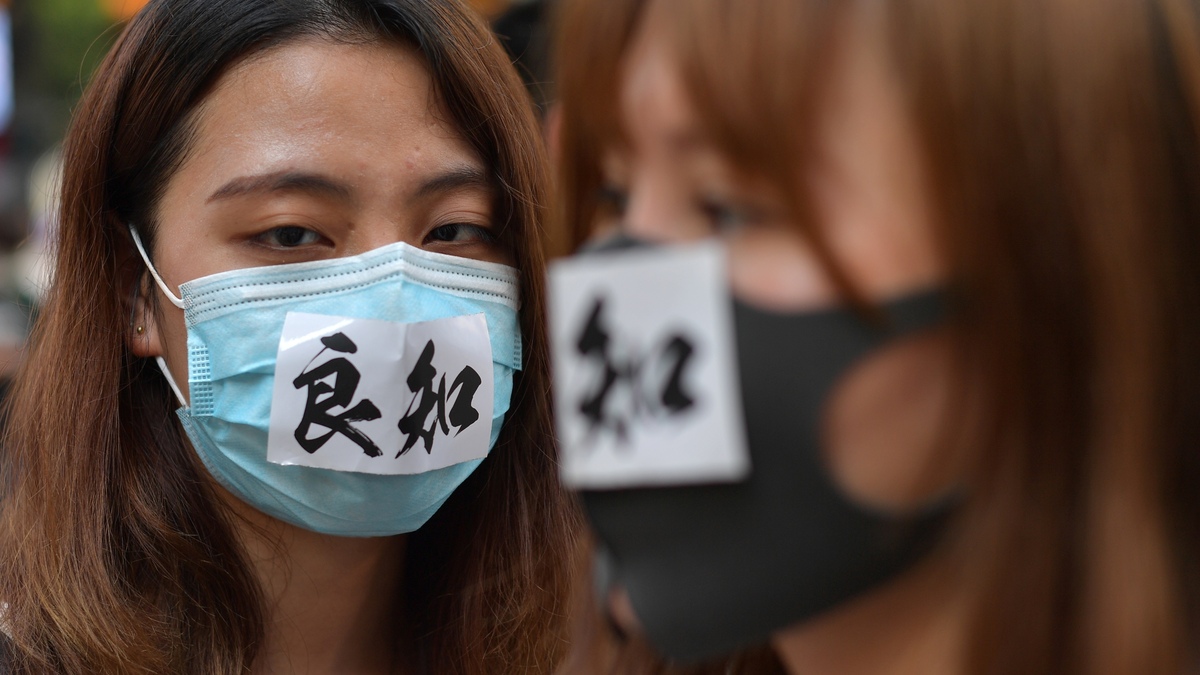 A woman wearing a face mask with the characters meaning "conscience" takes part in a protest against a government ban on protesters wearing face masks in Hong Kong on Friday.

The ban on face masks is an attempt to quell increasingly violent anti-government protests that have racked the city for more than 17 weeks.

"One thing is certain. If lawbreakers are not wearing masks, it is much easier for us to prove the charges and bring them to courts," said Hong Kong's security secretary, John Lee Ka-chiu, at a last-minute news conference held to announce the ban in Hong Kong.

Those who violate the ban face a year in prison or a fine of up to 25,000 Hong Kong dollars, or about $3,200. Face paint will also be prohibited.

The colonial-era Emergency Regulations Ordinance gives Lam broad powers to undertake security measures in times of public danger or emergency, such as censoring communications or raiding homes without a warrant. This is the first time the ordinance has been used in more than half-a-century; the last time was in 1967, during labor disputes and anti-government protests under British rule.

Yet Lam was adamant that Hong Kong was not in a state of emergency and reassured investors that Hong Kong was still a safe place to do business. "We would not use the ordinance to do things that harm Hong Kong's public interest," she told reporters.

Several pro-democracy activists have already said they will mount judicial appeals to challenge the use of emergency powers.

Hong Kong's decision to invoke emergency powers comes after some of the worst violence yet occurred on Tuesday, the same day Beijing staged massive celebrations in commemoration of 70 years of Communist Party rule.

Thousands of Hong Kong protesters staged a peaceful march against "global totalitarianism." But by midafternoon, the peaceful march had broken up into pitched street fights between hardcore protesters and Hong Kong police. During the violence, a police officer shot and critically wounded an 18-year-old protester.

Videos from multiple angles show masked protesters attacking the police officer with umbrellas and metal rods and tackling another to the ground before the shot was fired. Hong Kong police are armed with batons, tear gas and rubber bullets and are only permitted to fire live rounds when facing "assaults to cause or likely to cause death or serious bodily injury."

Hundreds of protesters wearing surgical and other masks gathered in Hong Kong's central business district Friday for a demonstration against the mask ban. A mass protest against police violence is planned for the weekend.

In the past few weeks, Lam has tried to deescalate the anti-government protests, which demand among other things that she call an independent police inquiry into violence against protesters, institute universal suffrage and step down.

In September, Lam officially withdrew a proposed extradition bill that would have sent suspected criminals to be tried in mainland China, a proposal that touched off the nearly four months of protests. She also held her first town hall meeting three weeks later with Hong Kong residents to better understand community grievances and to create policy solutions.

Protesters say the compromises are too little, too late. Lam reiterated Friday that she would not step down.

Lam has indicated resolving the protesters' demands may be up to Beijing and not entirely up to her, however. In a leaked recording of a private talk obtained by Reuters, Lam can be heard telling a group of businessmen that, "If I have a choice, the first thing is to quit, having made a deep apology, is to step down."