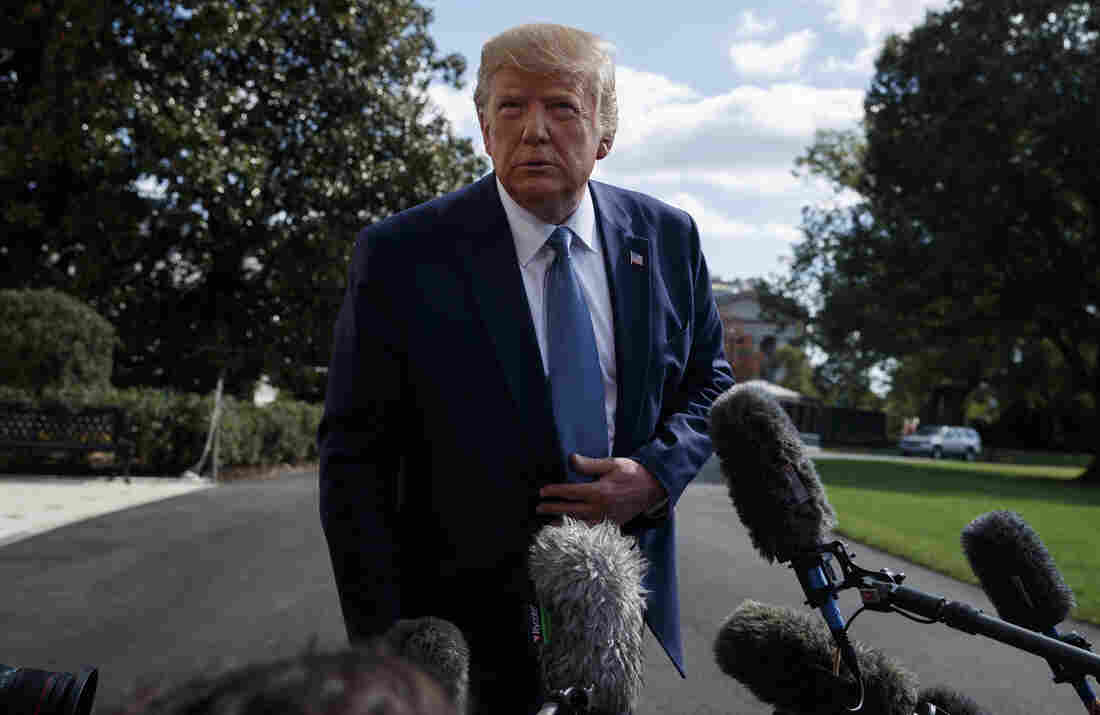 President Trump talks to reporters on the South Lawn of the White House on Friday, demanding that the House formally vote on an impeachment inquiry before responding to lawmakers' requests for documents. Evan Vucci/AP hide caption 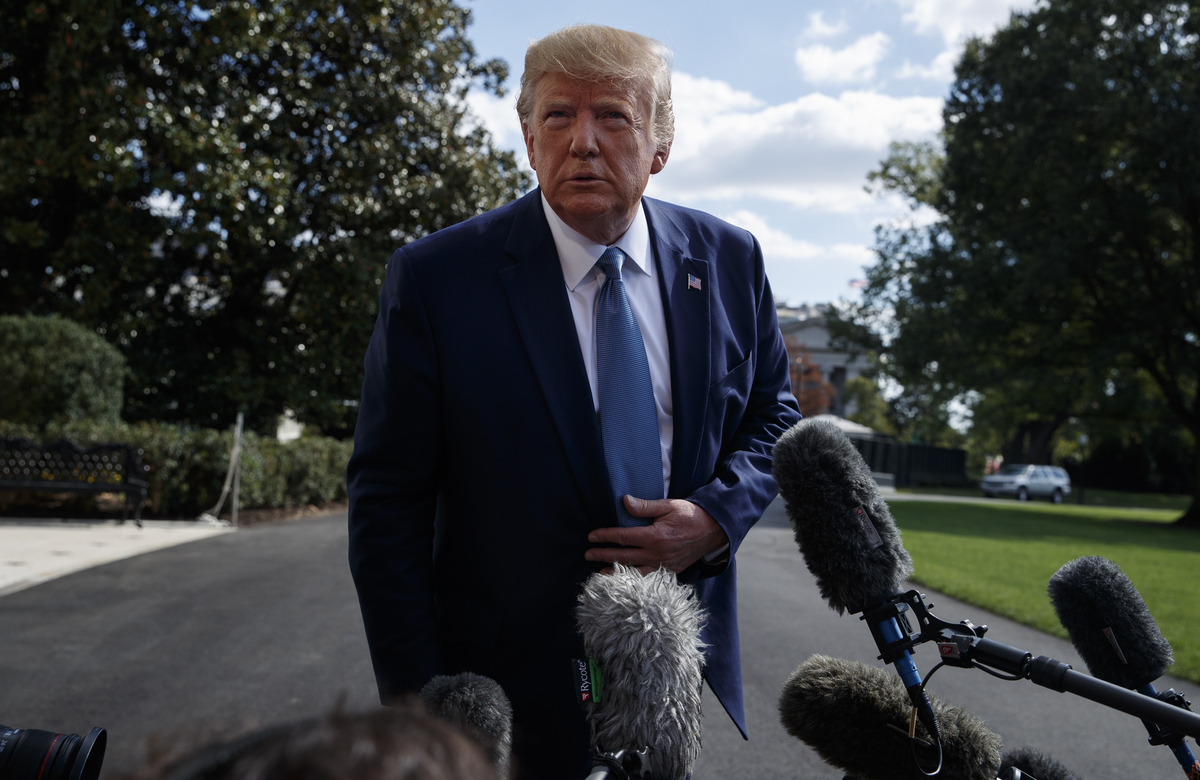 President Trump talks to reporters on the South Lawn of the White House on Friday, demanding that the House formally vote on an impeachment inquiry before responding to lawmakers' requests for documents.

House Speaker Nancy Pelosi did not rule out a vote by the full chamber on its impeachment inquiry into President Trump — but she restated her belief on Friday that none is required for it to move ahead.

Pelosi, D-Calif., said on a trip to Atlanta that she was unmoved by calls from the White House for a full vote. Trump said earlier in the day that he would send a letter to the speaker, which was expected to demand action by the full House.

"We may decide to do it, but it has nothing to do with the president saying what he's saying," Pelosi told reporters, including Robert Jimison of Georgia Public Broadcasting.

"The White House has refused to engage with—or even respond to—multiple requests for documents from our Committees on a voluntary basis. After nearly a month of stonewalling, it appears clear that the President has chosen the path of defiance, obstruction, and cover-up," Intelligence Committee Chairman Adam Schiff, D-Calif.; Foreign Affairs Committee Chairman Eliot Engel, D-N.Y.; and Oversight and Government Reform Committee Chairman Elijah Cummings, D-Md., said in a joint statement.

Reporters asked Trump earlier in the day at the White House about his willingness to accommodate congressional requests for testimony or documents.

Trump has gone back and forth about what he may or may not release from within the administration on the Ukraine affair, and he wasn't clear on Friday about whether he might stop cooperating short of a full House vote.

That issue faced its first test not long after Pelosi spoke, when House Democratic chairman announced they're requesting documents from Vice President Pence about his dealings with the government of Ukraine.

Investigators want to know about the role Pence may have played in communicating Trump's desires to Ukrainian leaders that its government launch investigations that might help Trump in the 2020 election.

Katie Waldman, the vice president's press secretary, did not directly address whether Pence's office would give Democrats what they're requesting but did criticize them and their investigation.

"Given the scope, it does not appear to be a serious request but just another attempt by the do-nothing Democrats to call attention to their partisan impeachment," she said.

The White House's letter to Congress is expected to contend that for impeachment to be legitimate, all members in the chambers must have a chance to support or oppose it. Supporters have been making that case for some time already.

Pelosi said on Friday that Democrats are "very comfortable" with where they are today on the status of the impeachment inquiry.

The House's rules do not mandate a vote for lawmakers to conduct an impeachment investigation, but a vote could give Republicans more power in the Democrat-led inquiry.

It would also force lawmakers in both parties to go on the record for or against the inquiry as headlines fly thick and fast about the Ukraine affair.

While most Republicans so far oppose the impeachment investigation, some GOP lawmakers also have said the Ukraine allegations are worthy of an investigation. They could also face a tough choice if put to a vote by the full House. Some moderate Democrats have yet to take a position.

Nadler has said as much in his hearings, and attorneys for House Democrats also have invoked impeachment in their separate legal contests with attorneys for Trump over documents and witnesses.

The White House demand for a full vote represented the latest tactical skirmish within the broader political war over impeachment, which has sucked all the oxygen out of official Washington and largely sidelined other business between the administration and Congress.

Trump and Pelosi both have said, at different times, they thought Washington still might attempt to negotiate over other legislation — potentially involving prescription drug costs or new gun restrictions — but for now, the shadow of impeachment seems to have blotted out nearly everything else in the capital.

Trump's challenge about a vote also is an attempt to force Pelosi to truly test which of her moderate members, some of whom were elected last year in districts that Trump carried in 2016, are prepared to go on record in support of impeachment.

"Most of them, many of them, don't believe they should do it," Trump said on Friday. The president said that if Democrats move ahead, "I really believe they're going to pay a tremendous price at the polls."

Trump Publicly Calls For China And Ukraine To Investigate Biden

Trump Publicly Calls For China And Ukraine To Investigate Biden

Pelosi said on Friday that she believes the politics are most problematic for the minority, because a vote would put Republicans on the record about what's being revealed about Trump's requests for foreign governments to get involved in U.S. politics.

"You know who is most scared of having a vote on the floor – the Republicans," Pelosi said in Atlanta. Of Republicans, she said: "Every time they say something — turn it upside down."

Theory of the case

The top Republican on the Judiciary Committee, Georgia Rep. Doug Collins, has emphasized that in his view, Pelosi's statements about impeachment carry no legal weight on their own.

House Democrat “investigations” further reveal “impeachment” as a sham. The House hasn’t authorized a formal impeachment inquiry, and it has no real claim to grand jury information.

The Speaker’s press conferences have no legal effect.

What's more, Collins argues, what he calls a "real" impeachment would permit more of what he called "due process" for the House minority. As it stands, normal procedure in the chamber means that majority Democrats can convene hearings, call witnesses and issue subpoenas. Minority Republicans can't.

If the ongoing House impeachment is real, for Collins and Republicans, they too would get those powers and be able to mount an equal defense of Trump.

In formal impeachment proceedings, the president gets to defend himself, and both sides of the aisle have subpoena power. The Speaker is leading her caucus down a fake “impeachment” path because she knows they’ll lose on a level playing field.https://t.co/ijXdsSxiIO

Another ally of Trump's, Sen. Lindsey Graham, R-S.C., said Friday that Democrats in the House can't hide behind Pelosi if in fact they're serious about impeaching Trump.

Graham alluded to an apocryphal story about the president of the Continental Congress who, in 1776, is said to have signed his name to the Declaration of Independence so boldly that the King of England would be able to read it without his spectacles.

Impeachment in the House, if it proceeds, would amount to the equivalent of an indictment for Trump, which would then necessitate a trial in the Senate over whether he keeps his office. Chief Justice of the United States John Roberts would preside, according to the Constitution.

Republicans control the Senate, and Trump emphasized on Friday how much he expects that support to endure.

Democrats can see the arithmetic of a Senate impeachment vote as clearly as Trump and Republicans, so it isn't clear how far along Pelosi and her members are prepared to drive this offensive.

The speaker resisted calls from liberals within the party to impeach Trump for months, anxious about preserving Democrats' viability in moderate districts and with general election voters in the 2020 election.

But that was before the revelations about the deepening Ukraine affair: Trump asked his Ukrainian counterpart to investigate former Vice President Joe Biden, potentially in exchange for military assistance already authorized by Congress or engagement with the president.

Those developments moved enough House Democrats that Pelosi opted to move with them.

More documents in the Ukraine case emerged late Thursday, including text messages in which senior U.S. diplomats debate the propriety of the Trump camp's strategy to pressure Ukraine over the Biden investigation.

Democrats argue that Trump has abused his power.

Now Pelosi and Democrats must decide whether to press on no matter what and hand the case to the Senate — even though Trump and Republicans believe they would be strengthened by a party-line vote that they argue would amount to a vindication — or stop short with a vote of censure or other action within the House.

Complicating the political strategy for both sides are changing poll results on impeachment, some of which suggest more Americans may now support it.

Then there are arguments offered by Democrats such as Sen. Elizabeth Warren of Massachusetts, a presidential candidate. She has suggested the House has a duty to impeach Trump over his actions and force Republicans in the Senate to go on record defending the president.

Although many Senate Republicans have been muted in their response to the headlines about Trump's dealings with Ukraine, and his newer call for China also to investigate Biden, the red wall protecting the president still seems intact.

Republicans told NPR that the next few weeks would likely determine whether that bulwark holds — or whether cracks may begin to form.