Accessibility links
'We Need Support': Pacific Islands Seek Help And Unity To Fight Climate Change They are urging the international community for more resources to help manage climate change and calling for larger countries to cut their carbon emissions. 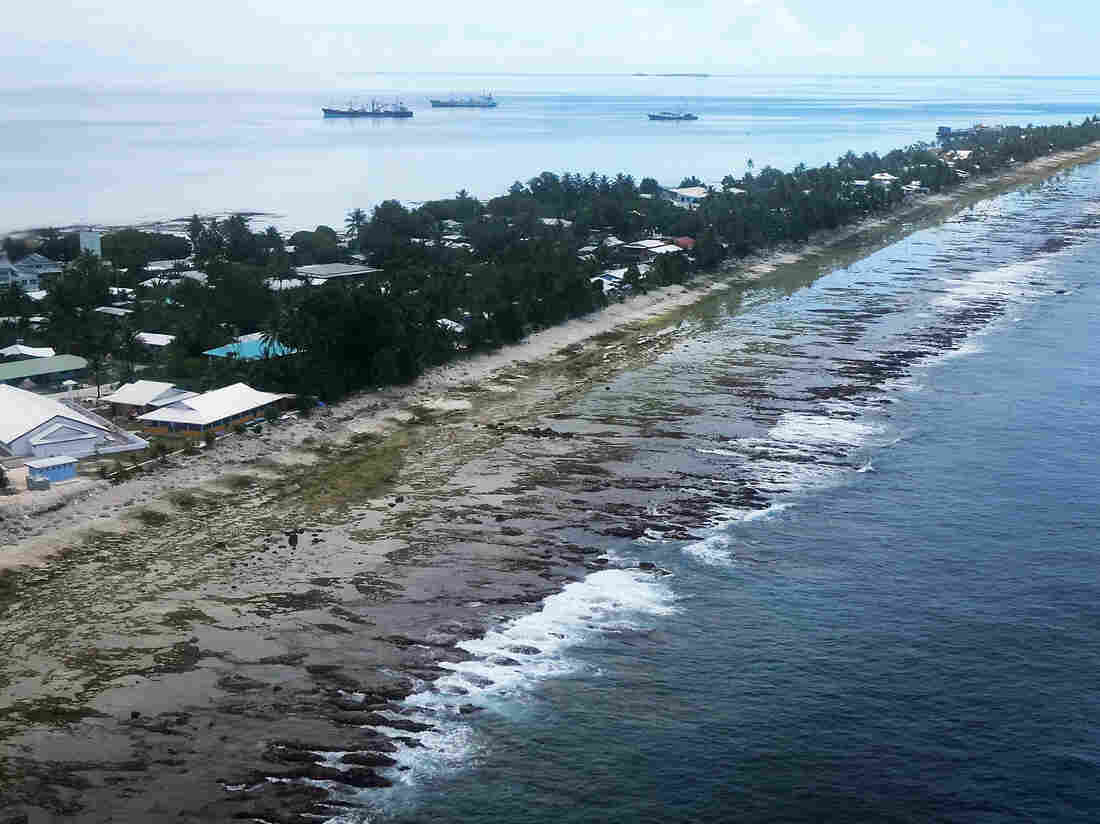 The ocean (right) and the lagoon (left) are separated by a thin strip of land in Funafuti, Tuvalu. The small South Pacific island nation is striving to mitigate the effects of climate change. Tuvalu's 11,000 inhabitants see effects such as rising sea levels in their daily life. Fiona Goodall/Getty Images for Lumix hide caption 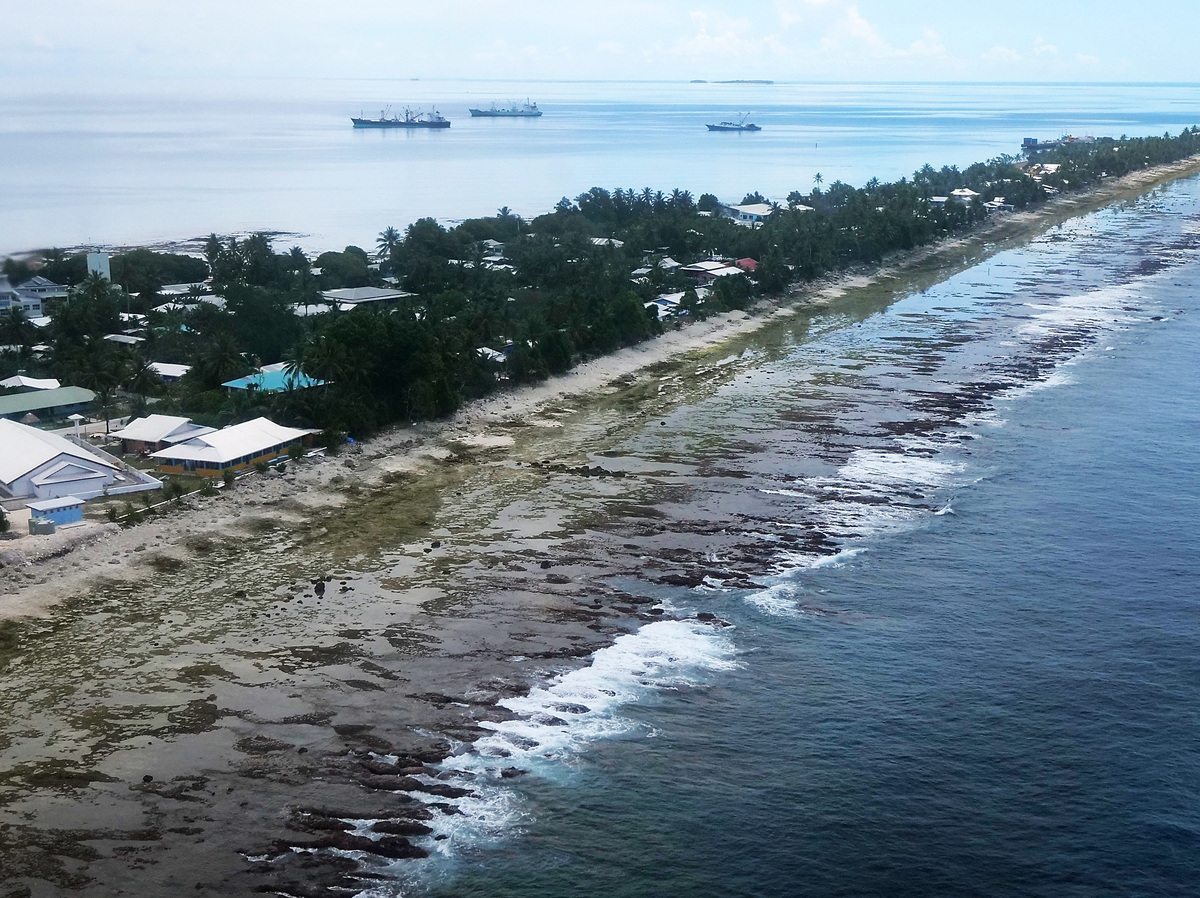 The ocean (right) and the lagoon (left) are separated by a thin strip of land in Funafuti, Tuvalu. The small South Pacific island nation is striving to mitigate the effects of climate change. Tuvalu's 11,000 inhabitants see effects such as rising sea levels in their daily life.

In recent weeks, children marched, nations made promises and teenage Swedish activist Greta Thunberg scolded world leaders for "failing us." But while one of the groups most vulnerable to climate change, the Pacific Islands, may have received fewer headlines, it was among those making the strongest calls for action.

"We need resources. We need support," Marshall Islands President Hilda Heine told NPR's Morning Edition. "We need everyone on board, and not everyone is on board at this point."

We Are On The Front Line Of Climate Change, Marshall Islands President Says

We Are On The Front Line Of Climate Change, Marshall Islands President Says

Their message comes at a time when scientists have cranked up the alarm for nations to dramatically cut greenhouse gas emissions and work toward mitigating impacts from the climate crisis.

A new report by an expert U.N. climate panel said the oceans are warming and sea ice and glaciers are melting much faster than previously thought, meaning storms will be more severe and frequent and sea levels will rise sooner. And for the first time, the panel projected that some island nations could become "uninhabitable."

"It's adding to their urgency," said Victoria Keener, a climate change research fellow at the East-West Center in Honolulu. The Pacific Islands "really pulled together to say, 'We're all in this together.' "

The Pacific Islands include a broad geographical area. Many experts focus on about a dozen countries including Fiji, Vanuatu and the Federated States of Micronesia identified as particularly vulnerable to climate change and natural disasters.

"I see the sea getting higher"

Warming oceans, sea-level rise and more intense weather events like cyclones and droughts are already realities for countries in the region. Marine life and coral are dying off. Wildlife on the islands are seeking higher elevation. Saltwater is intruding into farms, prompting farmers to move their crops inland.

"I see the sea getting higher as the coastal areas are eaten away," said Claire Anterea, 41, a climate activist in Kiribati. It's a country of just over 110,000 people living on atolls that dot the central Pacific.

"My family's home floods throughout the year," Anterea told NPR in an email.

In the Solomon Islands, coastal erosion has been severe, stripping away at coconut plantations and even graveyards, according to the country's environment minister, Melchior Mataki.

His government is looking at regional migration plans. "Relocation is often perceived as a last option," Mataki said. "Yet for some parts of our country, it is the only reasonable and sustainable option."

The U.N. said more than 60 countries promised to reduce their net carbon emissions to zero by 2050, but the biggest emitters — China, the United States and India — were not on the list.

Although polls show a strong majority of Americans believe human activity is fueling climate change, President Trump has dismissed mainstream climate science and promised to pull the country out of the 2015 Paris climate accord, saying it hurt the American job market.

While some world leaders, institutions and philanthropists pledged billions of dollars in new funding to help countries cope with the effects of climate change, researchers say it is far from enough, as NPR's Goats and Soda blog reported.

Countries such as India and New Zealand pledged assistance to Pacific Islands. Meanwhile, a group of island nations in the Global Island Partnership launched an online network to monitor each country's progress toward the U.N. Sustainable Development Goals and to hold one another accountable.

"What the islands need in addition to adaptation assistance are strong commitments and real action from the countries that are the biggest emitters," Keener, with the East-West Center, wrote in an email to NPR after the U.N. General Assembly ended earlier this week.

Micronesian President David W. Panuelo was upbeat, however, after the events in New York. "We felt we were heard by the global community," he said in a phone interview.

He said he is particularly encouraged by the attention paid by U.N. Secretary-General António Guterres. He also pointed a resolution passed in August to enhance U.N. cooperation with a group called the Pacific Islands Forum, which aims to "build resilience to extreme weather in the region."

"Guterres is very genuine about his concern," Panuelo said.

He wishes the U.S., which he called his nation's closest ally, would return to the Paris agreement, he said.

Last month, two Pacific Island nations, Solomon Islands and Kiribati, switched diplomatic ties from Taiwan to mainland China. Both countries cited China as a better partner for them to reach their development goals. President Taneti Mamau of Kiribati also pointed out that China has stuck with the Paris agreement.

"They are serious about it," he said.