Accessibility links
Review: 'The Secret Commonwealth,' By Philip Pullman The latest installment in Pullman's Book of Dust trilogy finds beloved heroine Lyra grown up and troubled, at odds with her daemon Pan and in danger from the plots swirling around her. 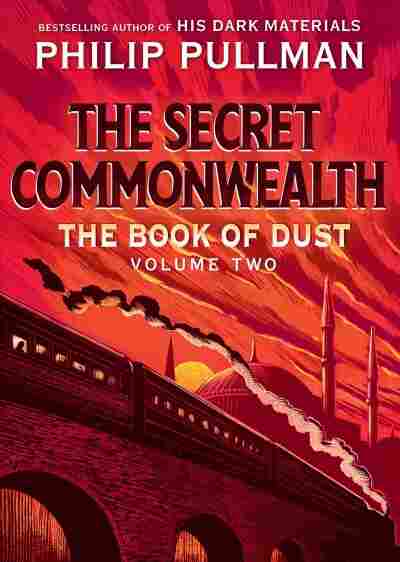 Philip Pullman's The Secret Commonwealth is a big novel full of big ideas, big characters and big sorrows. It is a tale of spies and philosophies and wit, of factions vying for control of the truth — or the public's opinion of the truth. It's an adventure, global in scope and epic in shape, but it's also a story about being unsettled in one's life, about living with consequences, of what happens to us when we are estranged from ourselves. I was fascinated, occasionally contemptuous as the story had me siding with one character over another, and always curious to know more about the world and what would happen and always in awe of Pullman. This book feels like a response to the darkness in our time as Lord of the Rings feels like a response to the darkness in J. R. R. Tolkien's. (Though Pullman might find that comparison paltry.)

Yes, the story is big. But The Secret Commonwealth's greatest strength is the care it takes to center the story in the individual; the importance it grants to what's in our heroes' hearts.

Ten years have passed since the events of the His Dark Materials trilogy, and there is a rift between Lyra and her daemon Pantalaimon. It's agony for most daemons to be more than a few feet away from their person; hurt one, the other feels the pain; kill one, they both perish. But Pan and Lyra are able to separate and, after an argument leaves them both hurting, Pan chooses to leave. He has decided their problem is Lyra's missing imagination, her unquestioning devotion to reason (under the influence of two authors' work he despises but she admires), so he's going to find her imagination and bring it back. Lyra, who's lost her home to schemers and around whom plots are circling, goes in search of Pan.

These two journeys are the A-plot, and they will break your heart, because you will want them to just find one another, to just be okay. The Secret Commonwealth both leans into and leans away from Lyra's specialness, showing us the world is more full of story than previously revealed, and that others have separated from their daemons too.

'The Secret Commonwealth' is a book full to bursting with folklore, science, religion, reason, that which connects and that which isolates.

The A-plot is tangled with and woven through the B-plot, where we follow Malcolm, the protagonist of previous volume La Belle Sauvage. A child in that book, he's now a 32-year-old professor and sometime secret agent, following the trail left behind by a murdered botanist who might have had new information on Dust, the mysterious particles sprinkled throughout this saga. And then there's the Magisterium, a shadowy, faction-riven church organization that's been a primary antagonist all along — it's becoming more powerful than ever before, and it is all too interested in Lyra, Pan, Malcolm, and Dust.

It isn't necessary to read the original trilogy. The Secret Commonwealth stands well on its own; one could even read it without having read La Belle Sauvage, though I don't recommend that. The first two novels in this new trilogy, called The Book of Dust, pair so neatly together that although they take place 20 years apart, the reader's experience of the second would be poorer for want of the first. They are also very different sorts of novels.

Where La Belle Sauvage reads as a quest of the sort we are used to — here a perceptive, curious child who wants to do the right thing getting in over his head, here a stupendously loathsome villain who will stop at nothing and seems almost supernatural in his stamina, here a panoply of helper-adults who are unavailable to help when it is most needed, here magic and a journey through the mythic heart of what Pullman calls Brytain — The Secret Commonwealth is messier, more complex, full of knots and ambiguities. La Belle Sauvage has a clear end; that story is complete. About 50 pages from the end of The Secret Commonwealth, I thought, 'Oh no. How long until Book 3 comes out?'

Pullman's characters question the way their world works. What are daemons? Are they even real? As ubiquitous as daemons are, the answer might initially seem obvious to the reader — but the characters tell us that's not so. And the more they learn about their world, the more they act or converse or uncover, the richer and more irresistibly mysterious it seems. The Secret Commonwealth is a book full to bursting with folklore, science, religion, reason, that which connects and that which isolates. The characters hold different, occasionally incompatible beliefs; they are always questioning, at least if they're the good guys. The bad guys tend to find answers so that they might hoard or hide them, squash all thought of a question.

Most interestingly, this is a world that shows us people — good people — can be unhappy with themselves. They can feel guilt and self-contempt and not know what to do with that. All the characters here are adults, their daemons have settled on a final shape, and the story is less about finding one's true nature than it is about finding peace with one's true nature.

Pullman's world-building is immediate and lived-in and vivid. It feels as if he is pushing on his borders, expanding them in ways I'm curious to see how he handles in Book 3. I'm also curious to see how he handles the ramifications of an extremely violent assault on a character. With so many threads in the story, that one felt unnecessary and it sticks with me like a hair in the throat.

My other — more minor — quibble is that, for all the richness of Pullman's world, most of the real depth and nuance belongs to our main protagonists. The villains are revealed as more human than they were in, say, La Belle Sauvage, possessing interesting and understandable motivations while being flawed in everyday ways, but we spend only a little time with them. It feels like they're also waiting for the third book before they get their due.