Accessibility links
Trump's Rhetoric Has Intensified As Impeachment Inquiry Heats Up An NPR analysis finds the president's use of heated phrases such as coup, treason, enemy of the people and corrupt media jumped considerably beginning in March. October is on pace to set a record. 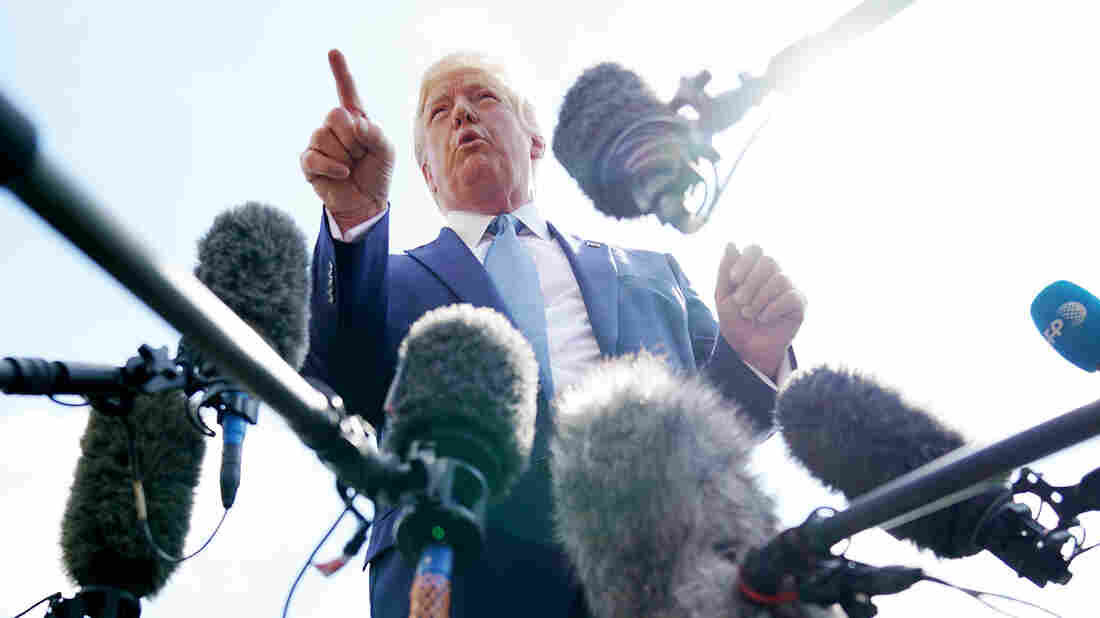 President Trump talks to journalists on the South Lawn of the White House Friday. An NPR analysis finds Trump's use of heated phrases has jumped considerably beginning in March of this year. Chip Somodevilla/Getty Images hide caption 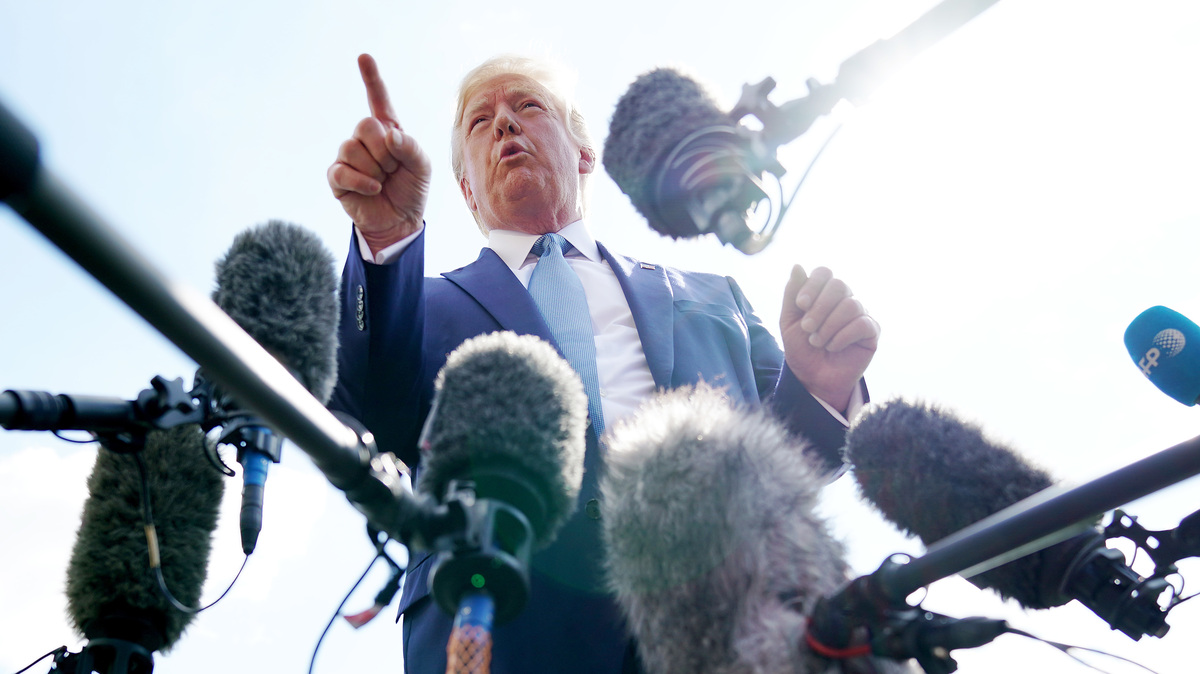 President Trump talks to journalists on the South Lawn of the White House Friday. An NPR analysis finds Trump's use of heated phrases has jumped considerably beginning in March of this year.

For President Trump, attacking rivals is like breathing. Using vulgar language is the norm. Calling stories he doesn't like "fake news" is an everyday sort of thing. But as Trump faces down an impeachment inquiry from House Democrats, his language escalated in distinct ways.

He is now lashing out at Democrats (especially House Intelligence Committee Chairman Adam Schiff), the whistleblower whose complaint is at the heart of the impeachment inquiry, and the press that's covering it with increasingly harsh rhetoric.

He has accused Schiff of committing "treason" and trying to take him out by "coup." Whoever gave information to the whistleblower is "a spy." While Trump has long called the media "fake news," he has resurrected the phrase "the corrupt media" to describe reporters covering him now.

And all of that is just from the past week.

An NPR analysis finds Trump's use of heated phrases including "lamestream media," "bullshit," "coup," "treason," "enemy of the people" and "corrupt media" jumped considerably beginning in March of this year. October is on pace to set a record.

Trump said "bullshit" in the midst of a long speech last March at the Conservative Political Action Conference in reference to the Democrats investigating him. That utterance opened the floodgates; he has now said or tweeted it seven times this year.

The Do Nothing Democrats should be focused on building up our Country, not wasting everyone’s time and energy on BULLSHIT, which is what they have been doing ever since I got overwhelmingly elected in 2016, 223-306. Get a better candidate this time, you’ll need it!

"I'm glad he just said it via Twitter and hasn't done it in the Rose Garden yet," said Sam Nunberg, who was an adviser to Trump in the early part of his presidential campaign and considers the president a friend.

"He's personally frustrated. That is why I think, here, I don't think he's playing three-dimensional chess. But make no mistake. That anger will then transfer to his supporters," said Nunberg.

Trump's Twitter volume has also corresponded with challenging times in his presidency. Much like his use of heated language, the number of tweets and retweets spiked around the time of the Mueller report and also in recent weeks.

Trump began escalating his language in the spring around the time the Mueller report was completed and released. It hasn't let up since then.

His reelection campaign has now incorporated that language into an ad running on cable, with a narrator calling the House impeachment inquiry "nothing short of a coup and it must be stopped."

Last week, in a closed-door meeting with U.S. diplomats in New York City, Trump went after the whistleblower, whose complaint set off the House impeachment inquiry.

Trump Challenges House On Impeachment Vote. Pelosi: No Requirement For That

"Who is the person who gave the whistleblower the information ... 'cause that's close to a spy," said Trump in a recording first obtained by the Los Angeles Times. "You know what we used to do in the old days when we were smart, with spies and treason? We used to handle it a little differently than we do now."

Treason is defined in the Constitution and punishable by execution. What Trump calls treason don't come close to meeting the definition. And impeachment is a procedure created by the framers of the Constitution, not a coup.

"It's rare to see the president of the United States himself calling the legitimacy of the system into question. And we have to worry that Trump could escalate his attacks or it could be more widely echoed if he gets in further trouble," said Nyhan.

While Nyhan says there's little risk of the military or police acting on Trump's words, he argues they aren't the only ones who are listening.

"But it's certainly possible that some violent extremist out there could take him literally and or seriously and that could be extremely dangerous."

Trump is transparent about the fact that he's intensifying his rhetoric.

"I don't even use 'fake' anymore; I call the fake news now 'corrupt news' because 'fake' isn't tough enough," said Trump earlier this week in the Oval Office. "Much of it is corrupt. It's corrupt. You have corrupt media in this country. And it truly is the enemy of the people."

This isn't the first time Trump put the phrase "corrupt media" in heavy rotation. He said it a lot in the closing weeks of the presidential campaign in 2016. It started three days after the Access Hollywood video, in which Trump was heard bragging about grabbing women without their consent, came out.

Then, as now, Trump's political career faced an existential threat.