Accessibility links
ACLU Calls On Homeland Security To Stop Turning Away Pregnant Asylum-Seekers Attorneys for the organization say vulnerable populations are supposed to be excluded from the groups of asylum-seekers being sent back to Mexico to wait for their U.S. immigration court hearings. 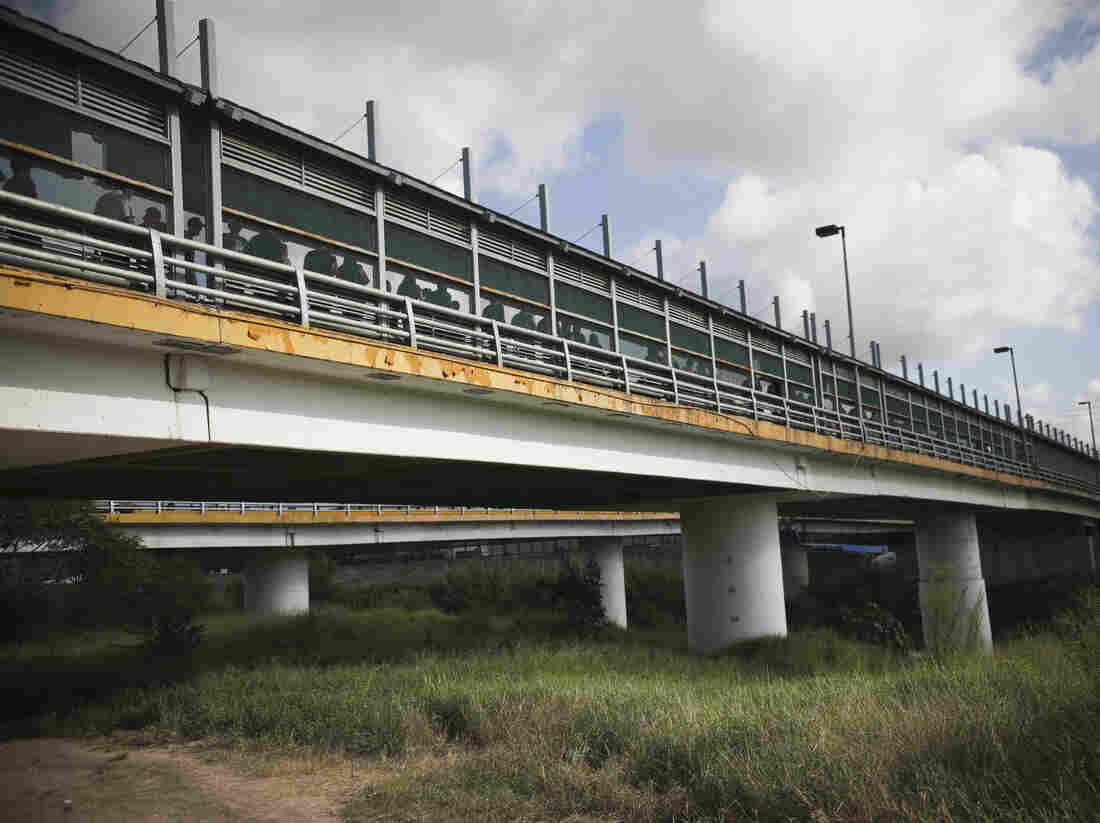 Pedestrians on the Puerta Mexico bridge, which crosses the Rio Grande, wait to enter Brownsville, Texas, at a legal port of entry in Matamoros, Mexico, in August. Emilio Espejel/AP hide caption 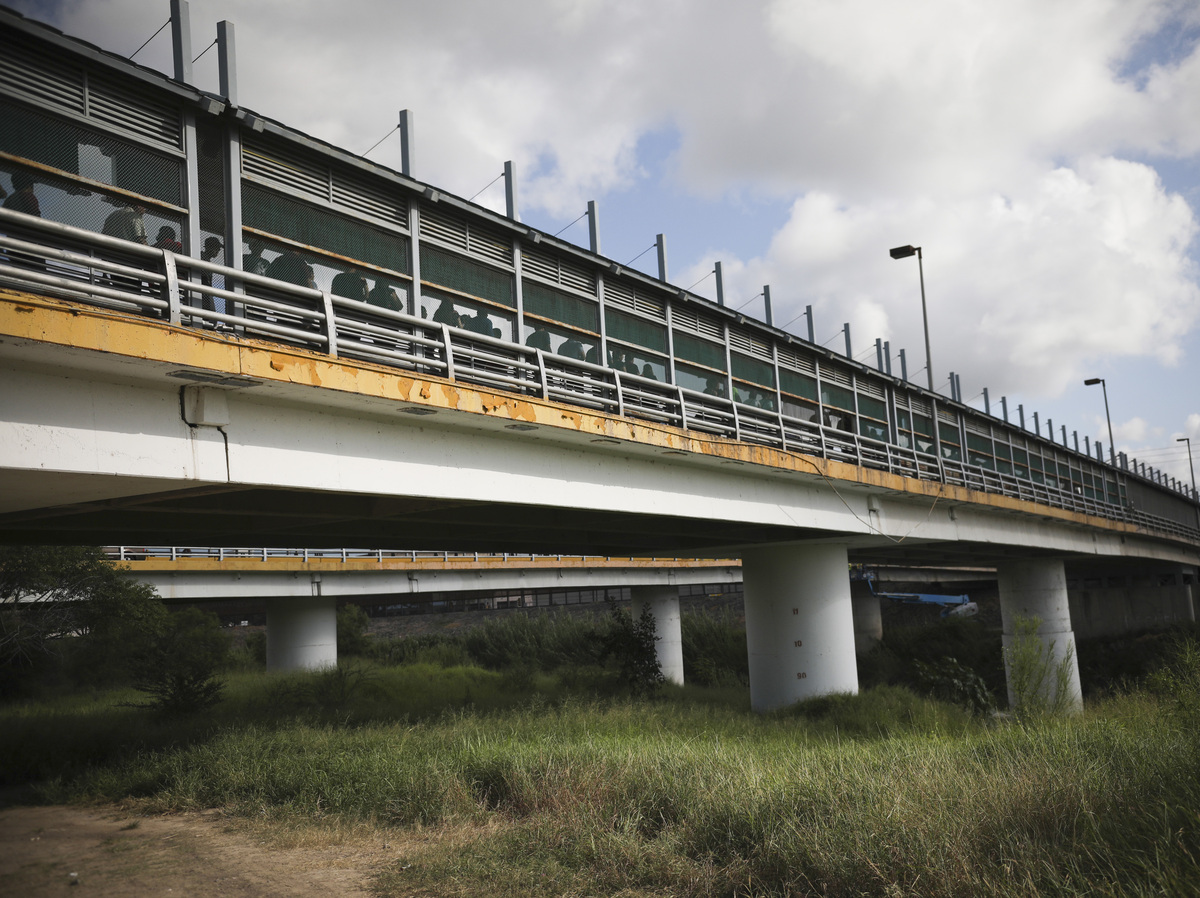 Pedestrians on the Puerta Mexico bridge, which crosses the Rio Grande, wait to enter Brownsville, Texas, at a legal port of entry in Matamoros, Mexico, in August.

To stem the flow of migrants across the southern border, the Trump administration is sending tens of thousands of asylum-seekers back to Mexico to await their day in U.S. immigration court — including some pregnant women.

On the Mexican side of the international bridge that leads to Brownsville, Texas, immigration attorney Jodi Goodwin prepares her client, an asylum-seeker named Yulisa, for what happens next. Goodwin warns Yulisa that things may get tense; then they walk halfway across the bridge and talk to the officers stationed there. Goodwin tells the officers they need to let Yulisa into the U.S. because she is 7 1/2 months pregnant.

"One of the officers was just shaking his head," Goodwin said. "The other one, I just asked him to see a supervisor because they're not going to be able to make a decision on the bridge. We'll see what he says."

When an officer returns, he asks to see Yulisa's sonogram and other identification. Goodwin shows him the documents and demands to see a supervisor. But they are told Yulisa must stay in Mexico.

Under the Remain in Mexico program — formally known as Migrant Protection Protocols — more than 48,000 asylum-seekers have been sent back to Mexico to wait for their immigration court hearings. Rochelle Garza, an attorney with the American Civil Liberties Union, said vulnerable populations are supposed to be excluded.

"Pregnant women in particular should not be in the program because they are especially vulnerable," Garza said.

The ACLU has asked the inspector general for the Department of Homeland Security to investigate and for the agency to stop turning away pregnant asylum-seekers.

Garza said at least 18 women have been sent to dangerous Mexican border towns where they have very little food, shelter and health care.

One asylum-seeker in the complaint was 8 1/2 months pregnant. She told the ACLU that U.S. immigration authorities took her to a hospital to stop her contractions before she was returned to Mexico. Another woman cited in the complaint said her water broke the same day she was sent back. She told the ACLU that she didn't report her labor pains for fear her child would be taken from her.

Yulisa was also in the complaint.

Yulisa fled Peru after getting death threats from the father of her child and asks that we not use her last name. She wasn't very hopeful as her first asylum hearing in the U.S. drew near.

"I think they're going to send me back, like they've been doing," said Yulisa in Spanish.

She has been in Mexico more than two months and has heard horror stories from other women.

"There have already been several pregnant women who have tried to enter, and instead of helping, they gave them a longer court date," said Yulisa in Spanish.

Yulisa believes U.S. officials don't want these women to give birth in America where the children would get automatic citizenship. 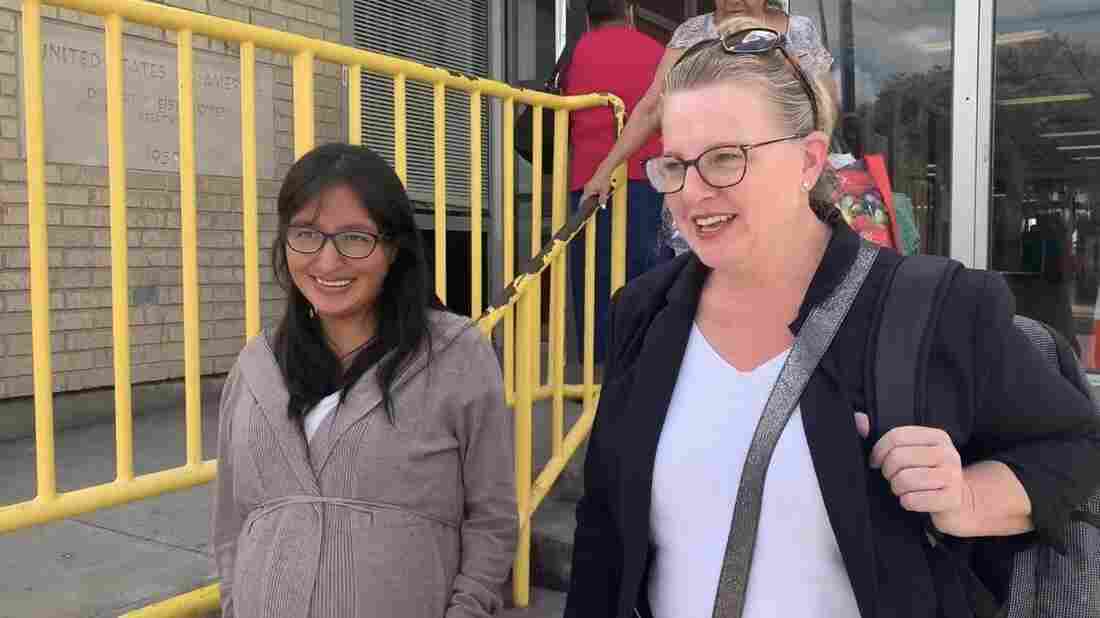 Yulisa and her attorney, Jodi Goodwin, walk out of a Customs and Border Protection facility after Yulisa is allowed to wait in the U.S. until her next immigration court hearing. Reynaldo Leaños Jr./Texas Public Radio hide caption 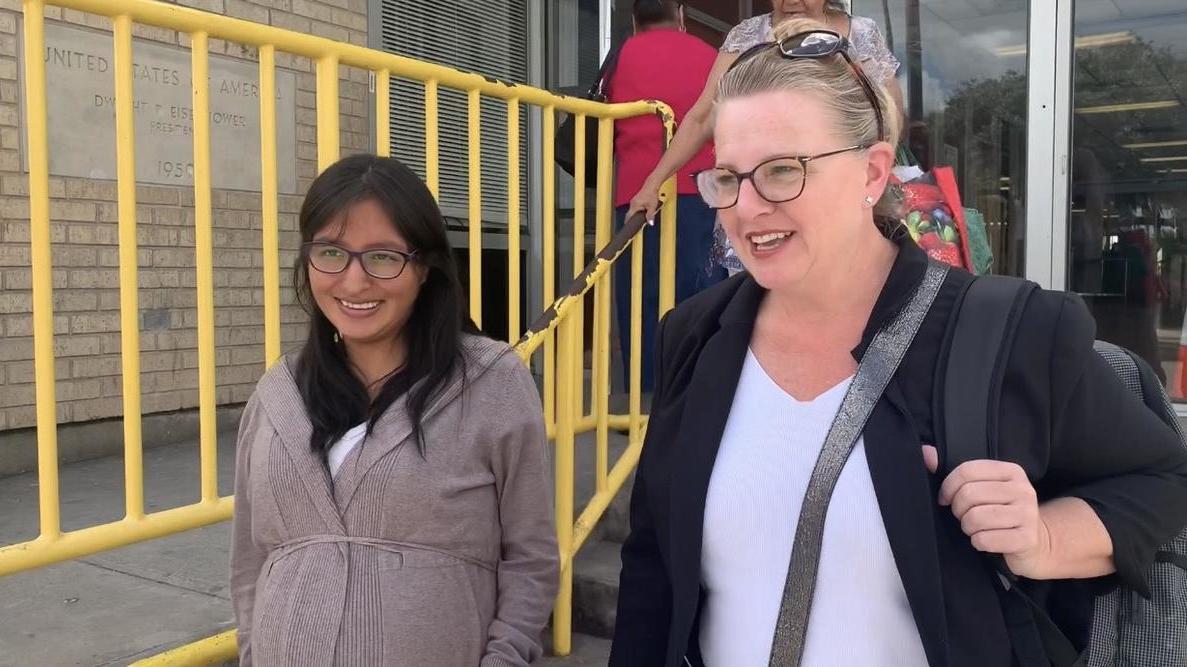 Yulisa and her attorney, Jodi Goodwin, walk out of a Customs and Border Protection facility after Yulisa is allowed to wait in the U.S. until her next immigration court hearing.

In an emailed statement, Homeland Security says officers do take physical and mental health into consideration when deciding whom to send back to Mexico. But they don't exclude all pregnant women because doing so, the agency says, could mean officers having to perform invasive pregnancy tests on every female asylum-seeker.

Yulisa's asylum hearing takes place in a tent courtroom. Her attorney, Goodwin, leaves the facility after a few hours surprised and relieved.

"They paroled Yulisa, so she can continue her court proceedings here in the United States," Goodwin says. "She'll no longer be in danger in Mexico."

Goodwin says it was the Mexican government that refused to receive Yulisa because of her late-term pregnancy.

Yulisa plans to stay with a relative in Utah until her next hearing. Her baby is due any day now.