Accessibility links
Bob Ross And 'The Joy Of Painting' Resonates With Fans Today The bushy-haired former Air Force sergeant with the soothing voice rose to fame in the 1980s and '90s with his PBS show The Joy of Painting. Bob Ross died in 1995, but his popularity endures. 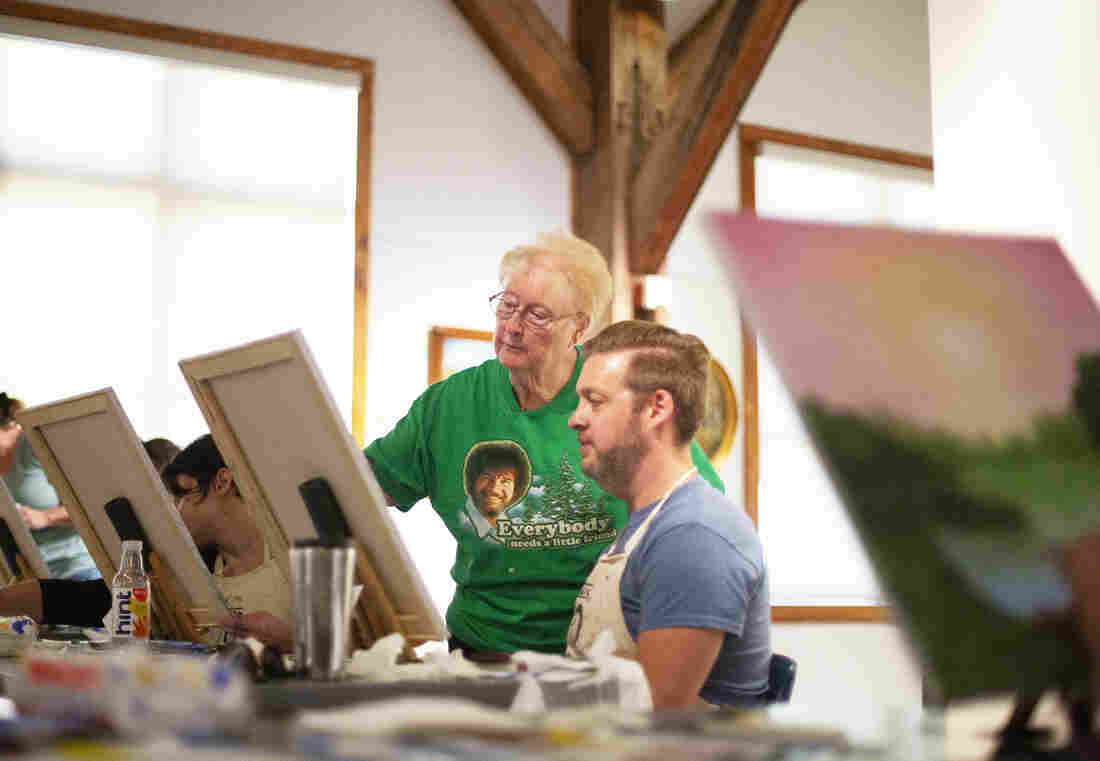 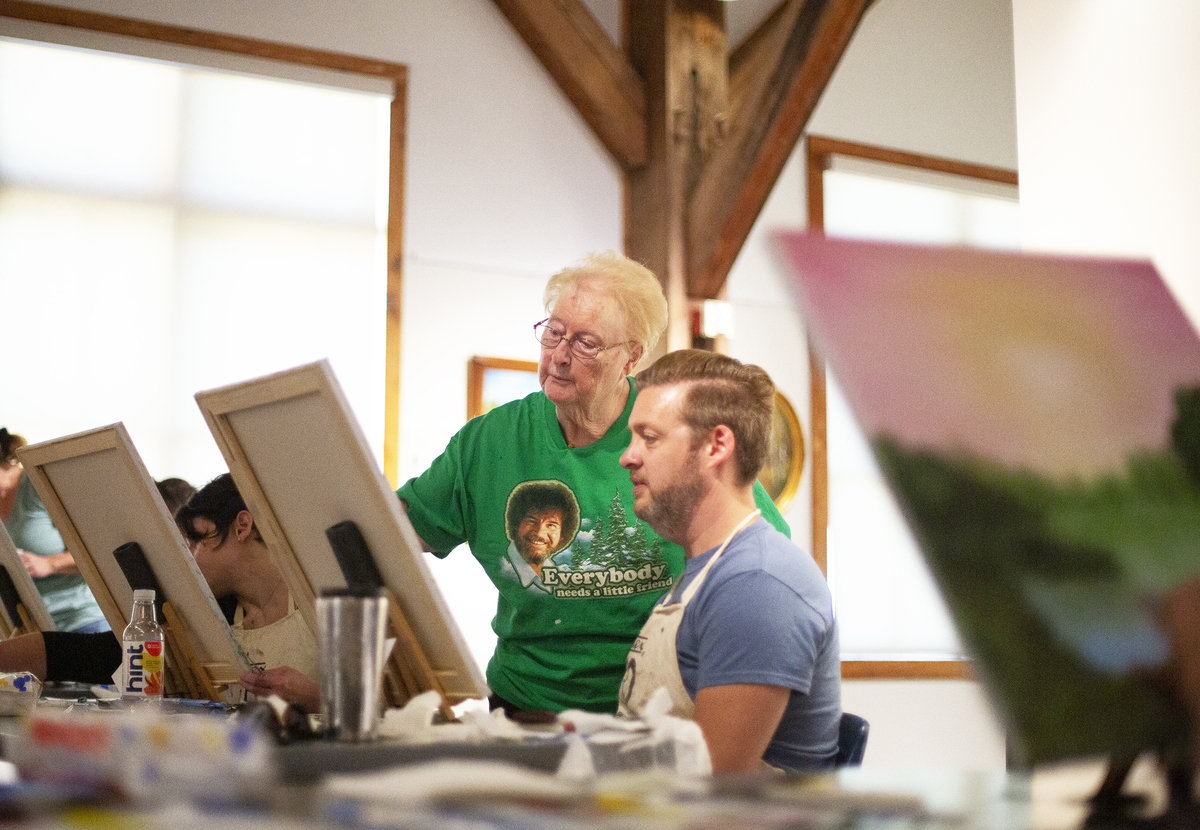 Sandra Hill offers guidance to Mark Scheiffley during a Bob Ross painting class at the Franklin Parks Art Center in Purcellville, Va., on Sept. 20. Hill is one of more than 3,000 people certified to teach the Bob Ross wet-on-wet painting technique.

On a recent Friday afternoon, Sandra Hill leads a painting class at an arts center nestled amid rolling Virginia hills, about an hour and a half drive northwest of Washington, D.C.

Each of the 10 adult students has a canvas balanced on an easel in front of them. They're dabbing paintbrushes loaded with dark green paint along the edge of a lake, the beginnings of a glowing sunset in the background.

"And think tree! Don't just go tap, tap, tap any old place. Remember, trees have depth to them!" she reminds the class.

But this is no ordinary painting lesson: The students have come to Purcellville, Va., from as far away as Texas to learn to paint in the distinctive style and palette of Bob Ross, the Air Force sergeant-turned-painter who rose to public media fame in the 1980s and '90s with his TV show The Joy of Painting. Over 31 seasons and more than 400 episodes, Ross became known for his hushed, soothing tones, big bushy hair, vivid landscapes and "happy little trees."

"It's almost spiritual," Cliff Nolan, a painter from nearby Manassas, Va., says about being in the class at the Franklin Park Arts Center. In a room lined with 24 original Ross paintings, Nolan pulls a laminated photo book out of his pocket. It's filled with pictures of paintings inspired by Ross' work, using the wet-on-wet painting technique he used.

The Real Bob Ross: Meet The Meticulous Artist Behind Those Happy Trees

Ross died from cancer in 1995 at age 52. But the popularity of this quirky pop icon continues to soar, among fans old and new.

The Joy of Painting is broadcast every day on some PBS stations across the country and is available on-demand to millions of viewers on Netflix and YouTube. There are Bob Ross bobbleheads, board games, underwear and coffee mugs. The Smithsonian's National Museum Of American History recently acquired four of his paintings for their permanent collection. And Ross — a throwback to the pre-Internet era — has a surprisingly huge following on Twitch, the streaming platform best known for video games, where fans can comment in real-time while he paints.

Left: Cliff Nolan holds a book of his own paintings that he has done in the "Bob Ross" style. Right: Sara Monteleone, wears a Bob Ross wig while she follows along with Sandra Hill, a Certified Ross Instructor, during the recent painting class. Mhari Shaw/NPR hide caption

Left: Cliff Nolan holds a book of his own paintings that he has done in the "Bob Ross" style. Right: Sara Monteleone, wears a Bob Ross wig while she follows along with Sandra Hill, a Certified Ross Instructor, during the recent painting class.

Ross left behind thousands of paintings, which rarely go on display. So when the current solo exhibition opened at the Franklin Park Arts Center, fans flocked to the small dairy-barn-turned-gallery.

Elizabeth Bracey, the center's director, worked with Bob Ross, Inc., to put the show together. Based nearby in Herndon, Va., the company — which Ross started with his business partners Annette and Walter Kowalski — owns most of Ross' paintings.

"We knew it was going to be popular, but not like this," Bracey says.

Thousands of people have visited the show since it opened last month. Bracey says she's expecting at least 15,000 by the time the exhibition closes on Oct. 15. That's half the number of visitors the art center usually sees in an entire year. It's become a kind of unexpected pilgrimage for fans, from all over and all walks of life.

"Little kids starting at like 4, all the way to grandmas and grandpas and every ethnicity, you know, every state. It's everybody," Bracey says. "Everybody loves him, [he] resonates with [everybody] in some way." 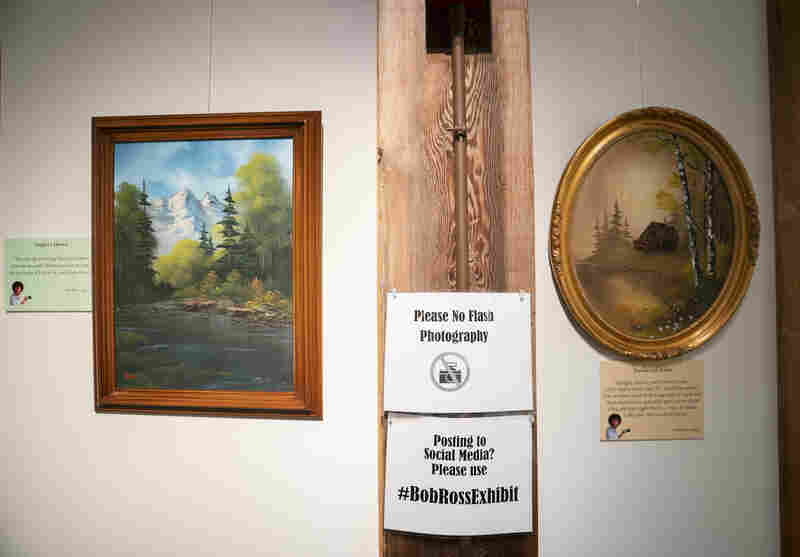 Happy Accidents: An Exhibit of Bob Ross Paintings will be on display the Franklin Parks Art Center, in Purcellville, Va., through Oct. 15. Mhari Shaw/NPR hide caption 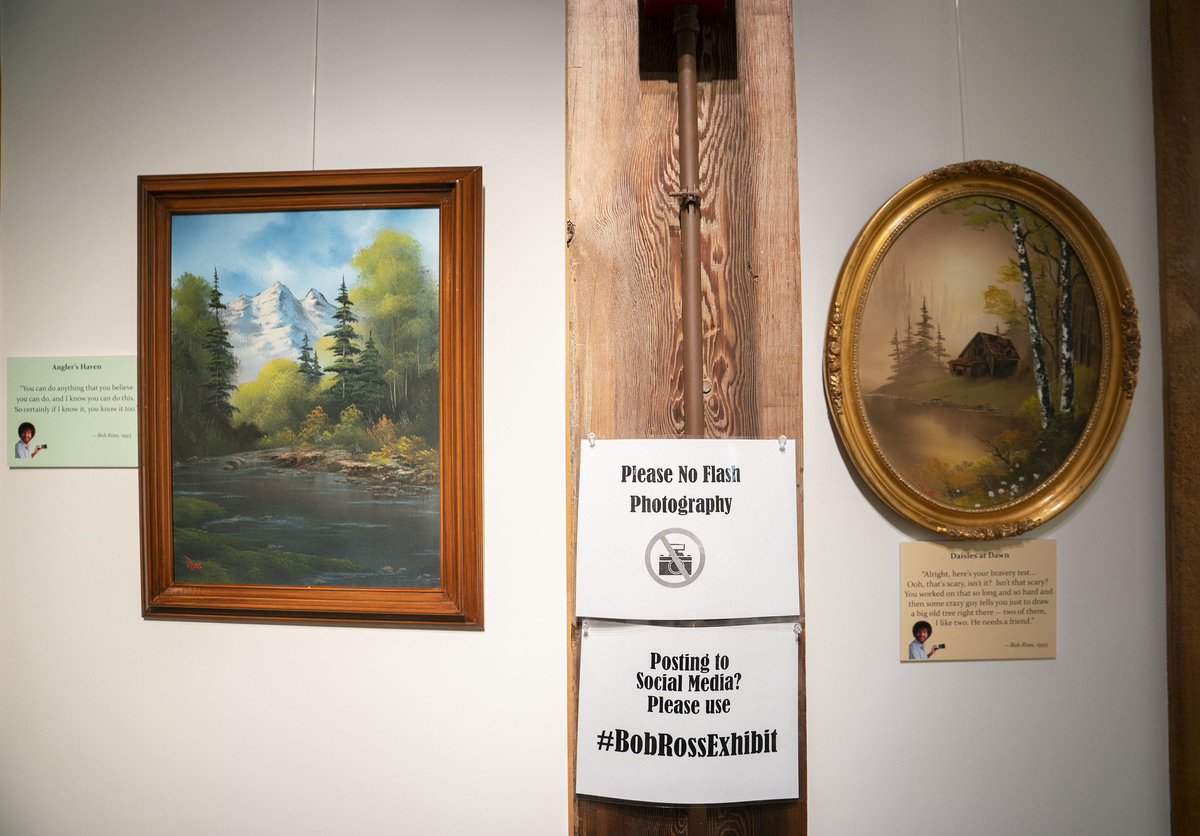 Happy Accidents: An Exhibit of Bob Ross Paintings will be on display the Franklin Parks Art Center, in Purcellville, Va., through Oct. 15.

The show is a wonderland of colorful sunsets, forests tucked into snowy mountains, and waves crashing against rocky cliffs, with paintings named things like Sunset Aglow, Home Before Nightfall and Daisies at Dawn.

"I like to think that there are places like this that still exist in the world, that don't have cell phone towers and high rises and things like that. It just seems like such an amazing magical place," Bracey says, staring at a painting called Splendor of Autumn.

There's a lake with towering birch trees in the foreground, and bold pops of fall foliage framing the canvas. And hung next to it, is a quote, something he said during the episode while he was painting it: "If painting does nothing else for you, it should make you happy."

The whole exhibition is like this, the paintings and quotes sharing the spotlight, side by side. Even when he was alive, Ross' draw wasn't just his paintings, it was also the way he talked.

Maybe in our world, there lives a big old cloud right up here. He just sort of floats around and has a good time all day. You know, clouds are one of the freest things in nature I believe. So, just let them go. Shoot, just let them have fun.

Any person who has ever wanted to put a dream on canvas, you can do it. You don't have to go to school half your life, you don't have to know Leonardo da Vinci as a personal friend.

Bob Ross made viewers want to lean in closer to the screen so they didn't miss anything. He could be wonderfully weird and deeply emotional.

Jerry Saltz, senior art critic at New York magazine, says that was one of the things that made Ross great. "Once you set eyes on that guy you're kinda locked in for 25 minutes," he says, referring to the length of an episode. "It's you alone in your dorky studio in your apartment, wearing an old shirt, and just working."

Ross captivated and connected with audiences, but he did much more.

"People think that he's just kitsch and cute and a little Buddha and fun happy little accidents ... but Bob Ross breaks down painting into its component parts," he says.

There was no irony, and the closest thing to a gimmick was a pet squirrel named Peapod he would occasionally bottle feed on screen. Instead, he demystified the process for viewers in each episode, creating one landscape, from start to finish: a blank canvas transformed before their eyes.

"And then he adds a beautiful bit at the end: You can do this, too," Saltz says. "You have to banish self-doubt. And at the end of the session, it's done. And he's basically saying, 'And then we'll do another happy little accident tomorrow.'" 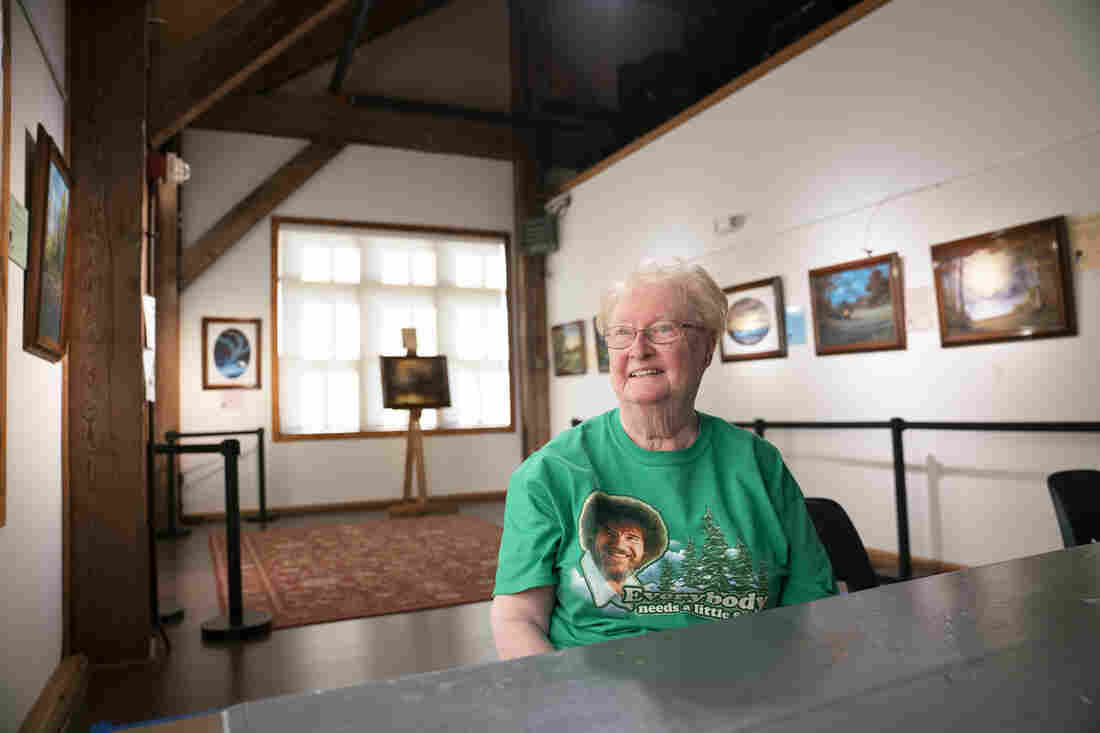 Sandra Hill has been a Certified Ross Instructor for more than 20 years. For her, painting is "a calming thing." "It doesn't really matter how well you really do the painting, except that you're enjoying something," she says. Mhari Shaw/NPR hide caption

Ross didn't want people to buy his paintings — in fact, he didn't sell paintings once he started his television show — he wanted viewers to create their own. As long as they just tried to paint, Ross said, it will be right, no matter what.

That Bob Ross attitude lives on at the painting class in Purcellville, where the landscapes lining the walls practically whisper encouragement to the budding artists.

The students all have palettes set out with Ross' signature colors — titanium white, alizarin crimson, midnight black. Three women in the back of the class are wearing big, bushy Bob Ross-style wigs. The soothing sound of paintbrush on canvas, another Joy of Painting signature, fills the room. 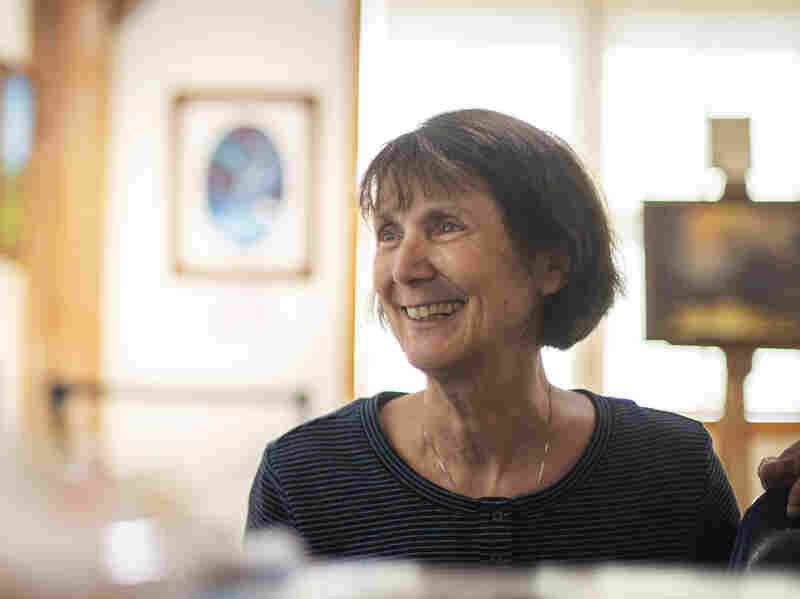 Susan Rossi traveled from Texas to participate in the class and see the exhibit. Rossi has used Bob Ross as a type of therapy after suffering from a stroke four years ago. Mhari Shaw/NPR hide caption

Susan Rossi sits at the front of the class. She flew all the way from Texas to attend. She's fussing with the row of trees along the lakeshore in her painting, dabbing them with a look of concern.

"Oh no, no don't you worry," Hill, the instructor, says, coming up behind her. "There's no mistakes here, we can fix that. These are happy accidents!"

Rossi, 70, started learning to paint from Ross' TV show after a stroke four years ago left her partially paralyzed and unable to work. The Joy of Painting had a profound effect on her.

"It brought something out of me I didn't know was in there," Rossi says with a smile. "You think, wow, no limits! You can move clouds, you can change mountains. I guess that's what you learn from Bob Ross. Don't put limits on your life."

Ross himself was surprisingly philosophical during the show, often casually whispering big ideas to viewers before returning to his instruction. These sprinkles of wisdom have lived on in quote books and Internet memes.

One that pops up often is from an episode that Ross taped in 1992, after his wife, Jane, died from cancer. In the episode, he's painting a scene with a lake resting between two majestic mountains. He loads his brush up with a dark mixture of paint and starts to dab it all across the bottom of the mountains.

Don't worry, he tells viewers, I'm only adding this dark for contrast.

He looks at the camera and quietly says, "I'm waiting on the good times now."

Then he turns back to his painting, instructing viewers on the next step.

Maybe what's made Bob Ross so everlasting is really that simple. He reminds people that the dark is there for a reason, and helps them find the light when they need it. 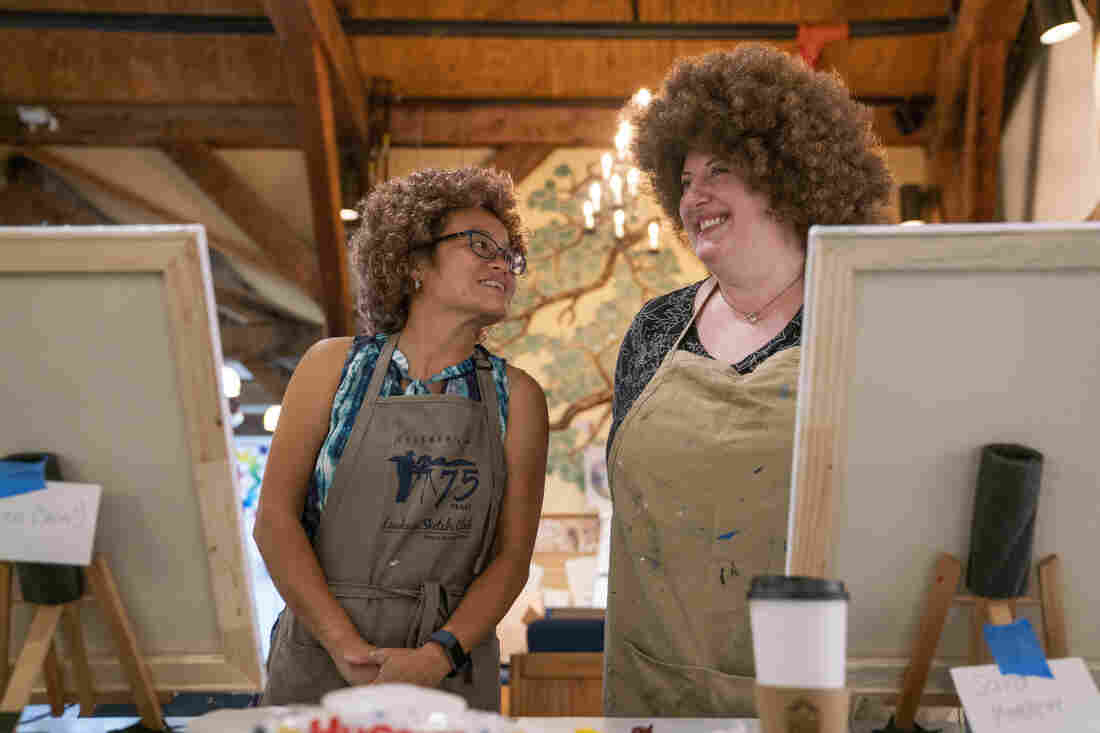 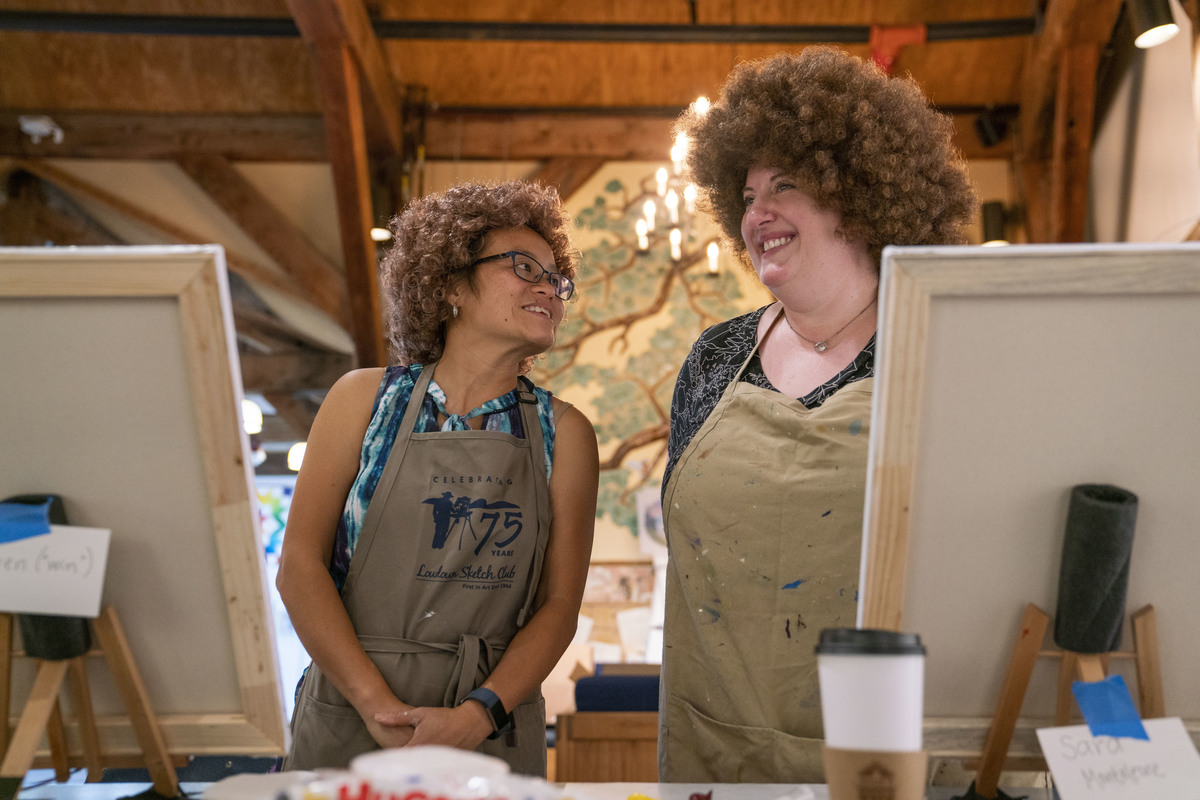