Accessibility links
Fat Bear Week Has Bear Fans Filling Out Brackets Like It's Ursine March Madness Bears preparing for hibernation need to eat as much as they can for the winter. In Alaska, this habit has turned into an Ursine March Madness with bears going head-to-head to see who is the fattest. 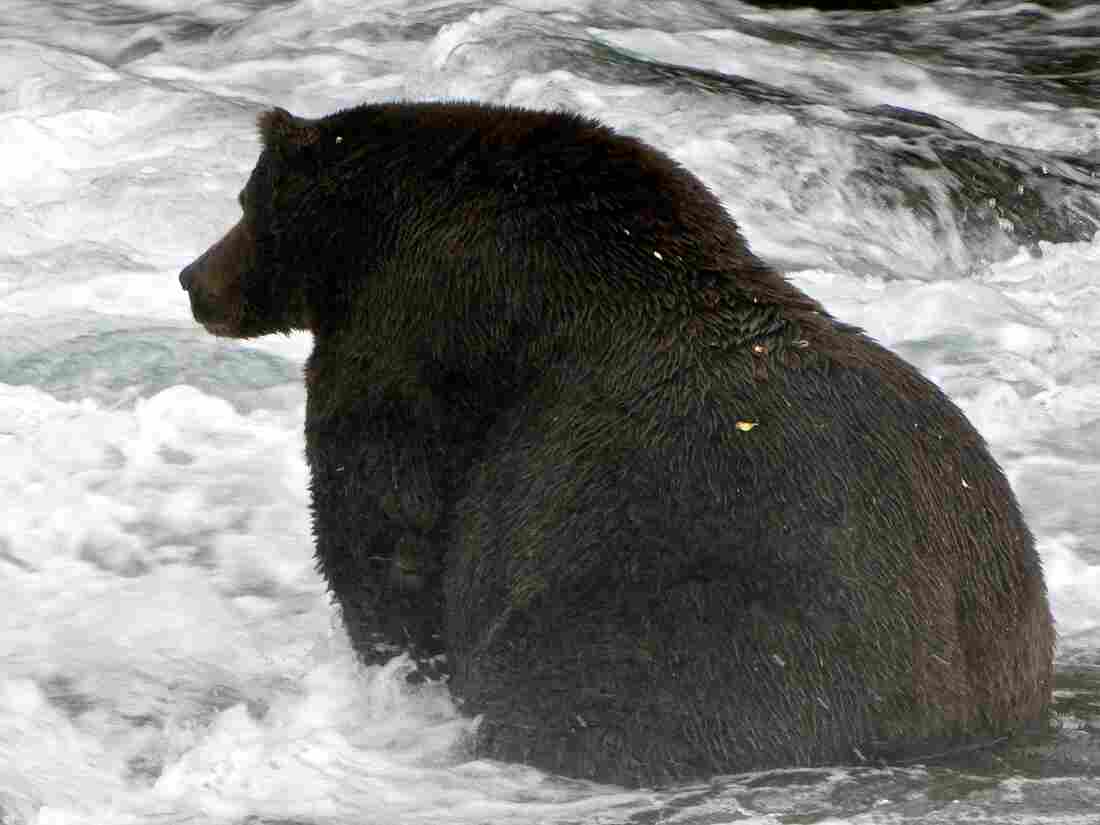 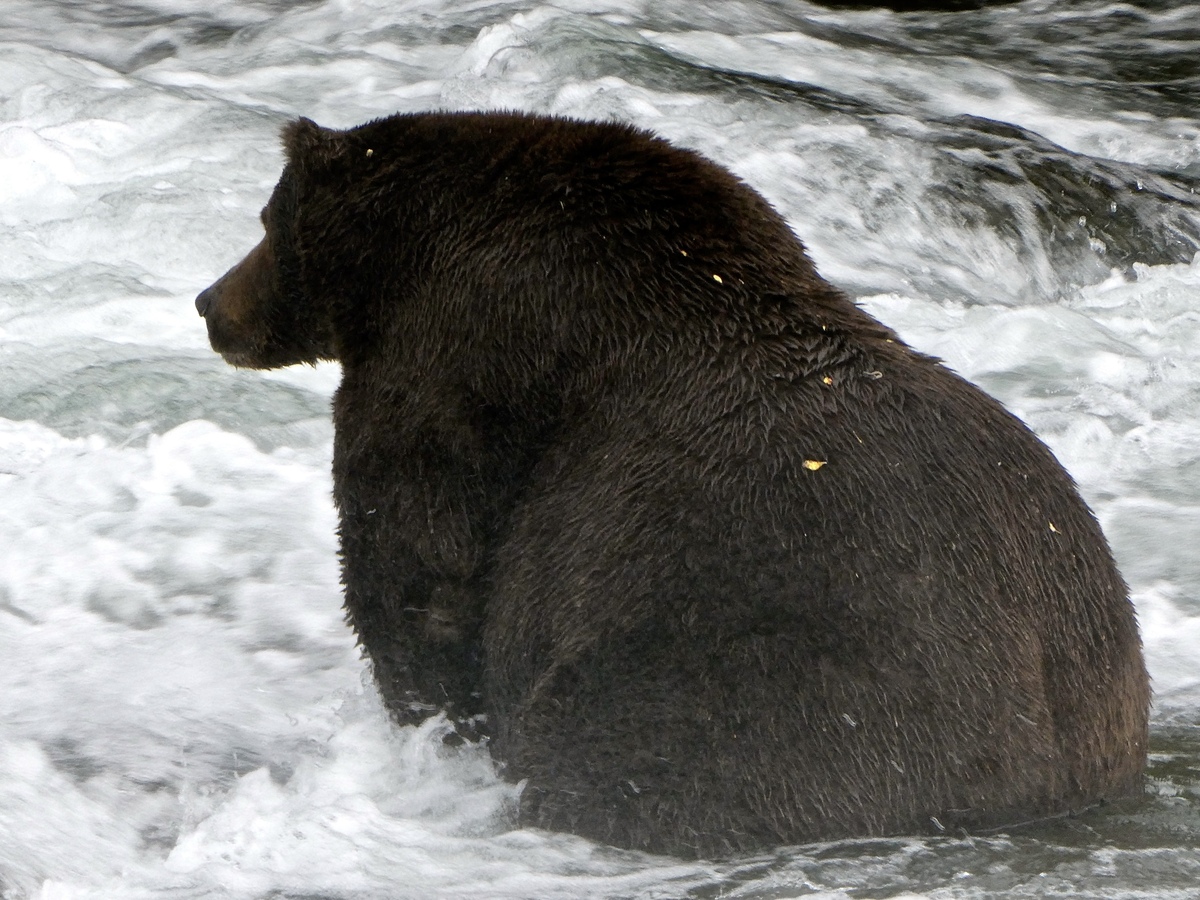 Bear 747 is a favorite in the Fat Bear Week contest in Alaska's Katmai National Park.

Combine the two and you've got Fat Bear Week — a kind of Ursine March Madness, in October.

There are an estimated 2,000 bears in Katmai National Park & Preserve, a glorious and massive 4 million-acre stretch of wilderness in Southwest Alaska. Each year, the bears spend the summer trying to get as fat as they can to prepare for hibernation.

And in October, bear fans get to vote on who is the fattest of them all.

This year, the bears were whittled down to a bracket of 12 contenders. Four heavyweights had first-round byes. Voters on the park's Facebook page choose their favorite from each matchup. The winner moves on to the next round. 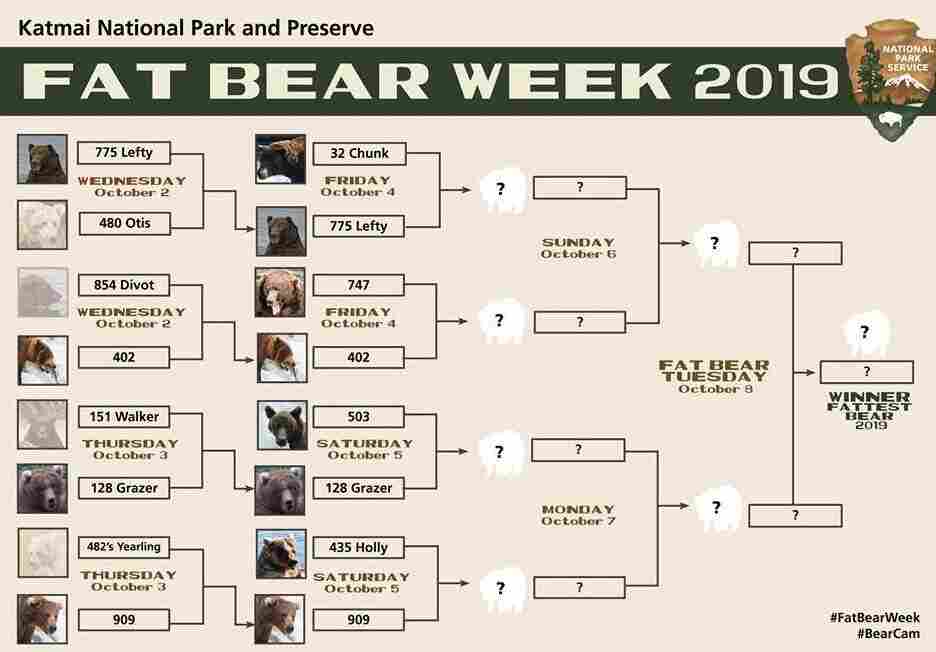 As the competition began this week, Katmai Conservancy media ranger Naomi Boak had her eye on two of what she calls "favorites." No. 435. ... they assign a number after monitoring the bears for a while ... and No. 747. He is "as big as a jumbo jet," she says.

"He was so big he looked like he was ready to hibernate in July. He's the size of two bears."

This isn't fat shaming, Boak says. It is fat glorifying as the biggest bear has done the best job getting ready.

"They lose a third of their body fat over the winter," Boak says. "So they need all that fat to survive." 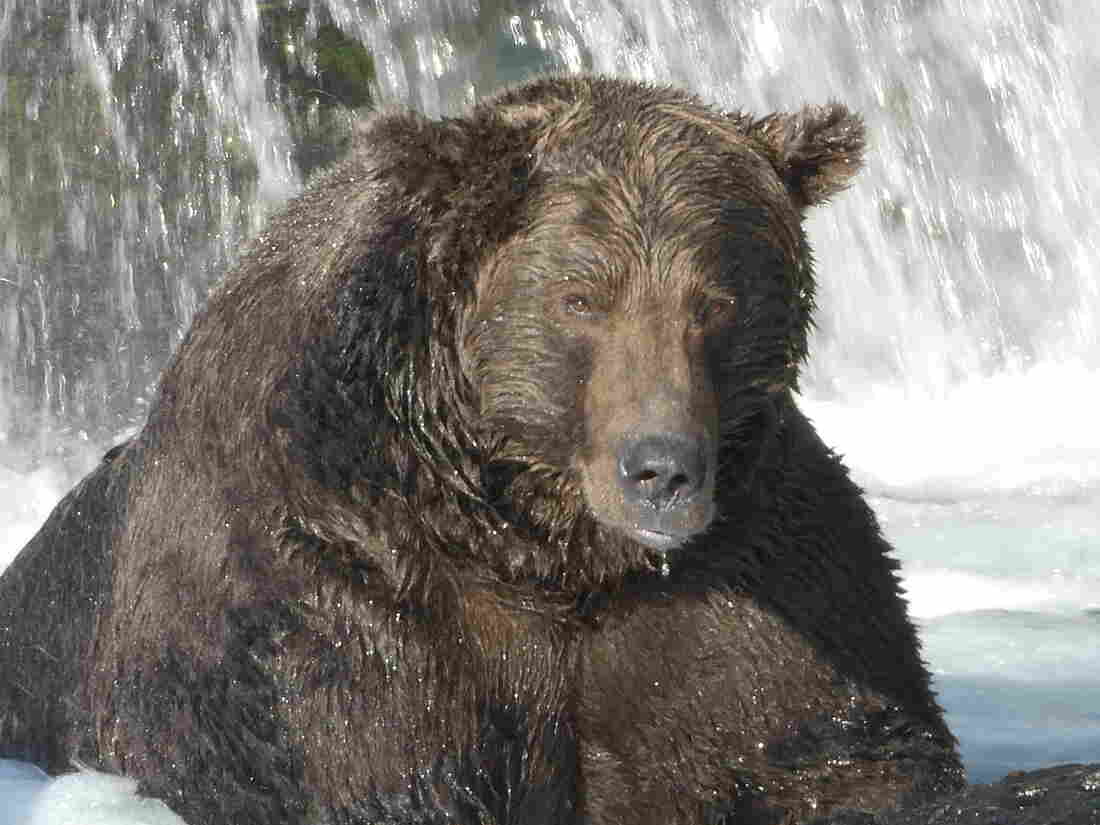 Bear No. 68 has packed on the pounds needed for a long hibernation. Courtesy of NPS Photos hide caption 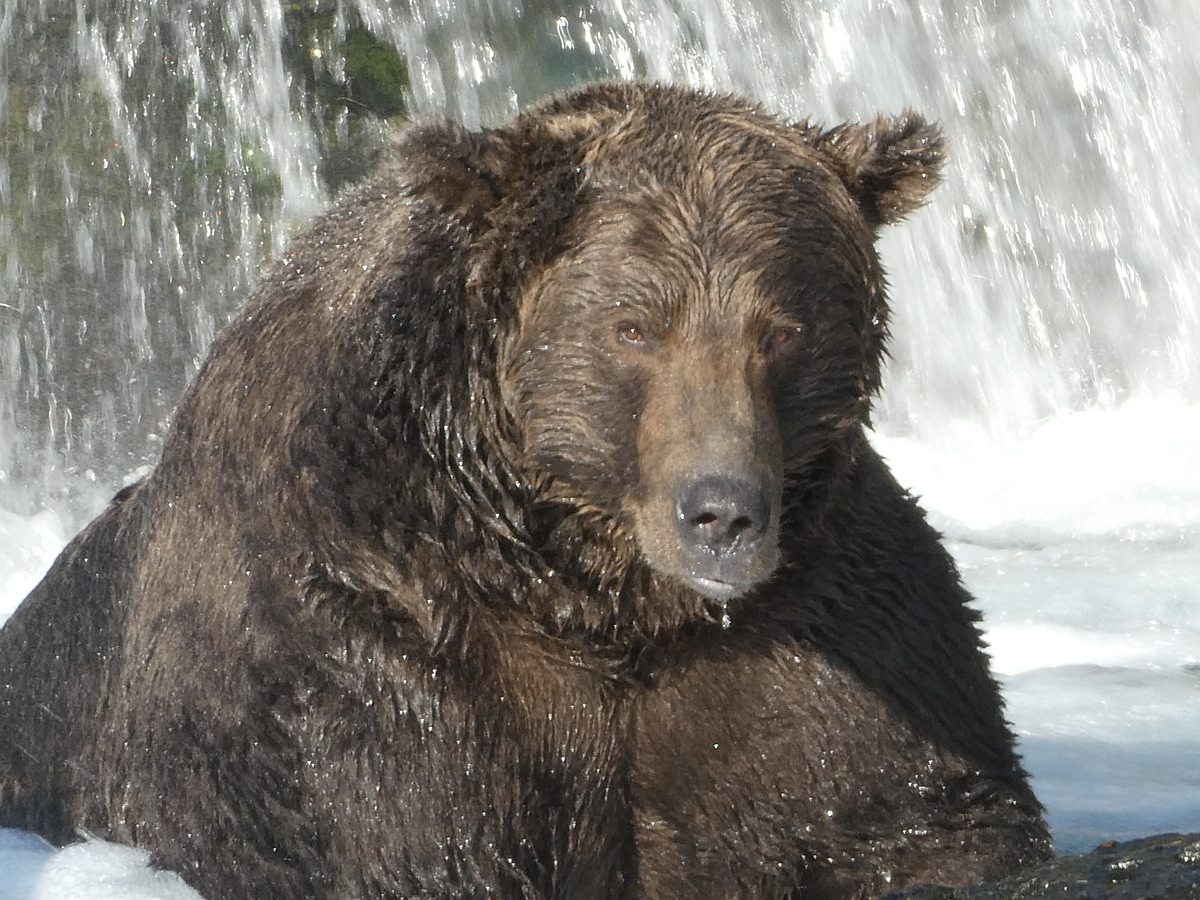 Bear No. 68 has packed on the pounds needed for a long hibernation.

The Fat Bear Week competitors are coastal brown bears who forage along the Brooks River. They dine voraciously on one of the largest sockeye salmon runs in the world. There's a fascinating science to this annual gorging, Boak says. A hormone that usually inhibits hunger switches off in the bears this time of year.

Boak and her fellow media ranger, Brooklyn White, chose the 2019 competitors— a variety of bears that includes males, females and so-called sub-adults. Those are emancipated cubs that have grown up and spent a year on their own.

Boak and White wanted good before and after photos of the 12, showing skinny shots from earlier in the year and recent fat ones after feasting. Kind of a reverse infomercial.

White says they also wanted bears that people outside the park had gotten to know after watching them on remote bear cams along the Brooks River.

"Many of those folks who, you know, [who had spent] time watching the cams, would already have a relationship with a bear they were seeing in the contest," she says.

The bear cams and the 5-year-old Fat Bear Week contest are helping people connect with what goes on inside the park and helping extend the park's conservation mission. According to Boak, last year, there were nearly 56, 000 votes for Fat Bear Week. This year, the park hit that number in the first two days.

Park staffers make sure to get good before and after photos of the 12 contestants, including Bear No. 32 (Chunk). Barbara Lutes & Anna Marie Gantt/Courtesy of NPS Photos hide caption

Park staffers make sure to get good before and after photos of the 12 contestants, including Bear No. 32 (Chunk).

But there's a line, in the park, staffers don't like to cross. They try not to anthropomorphize wild animals in a wild place. That's why they give the bears numbers. Although bear cam followers like to add names. Like Lefty, Chunk and Grazer from this year's contest. Or last year's champ, Beadnose, No. 409. Boak says Beadnose is known worldwide, but this year, the bear is not defending her title.

"She was a no-show," Boak says, but she doesn't know why.

Beadnose could have been injured, died, or gone to another part of the park to fish.

Whatever happened, Boak acknowledges that Beadnose went out on top.

"She went out in a big way," Boak says, unable to resist one more fat bear pun.

This week, on Fat Bear Tuesday, a new champion is crowned. The first prize, says Brooklyn White, is, she hopes, a successful hibernation.