Accessibility links
Supreme Court's New Term: Abortion, Guns, Gay Rights On The Table Separation of church and state, immigration and questions about impeachment could be on the table this term, which starts Monday and will almost surely be a march to the right on flashpoint issues. 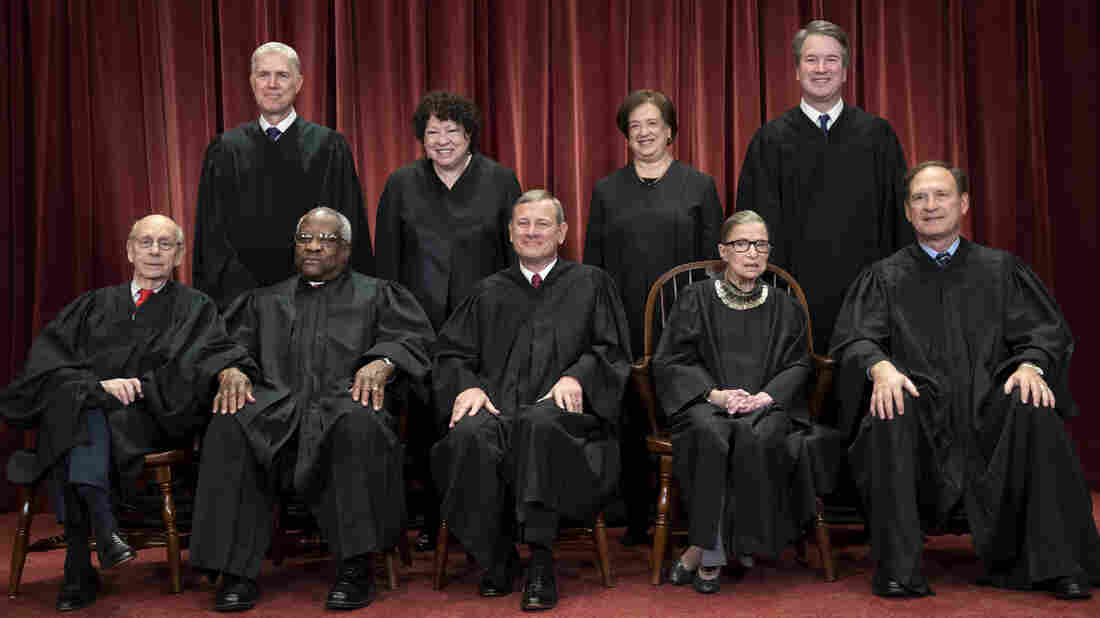 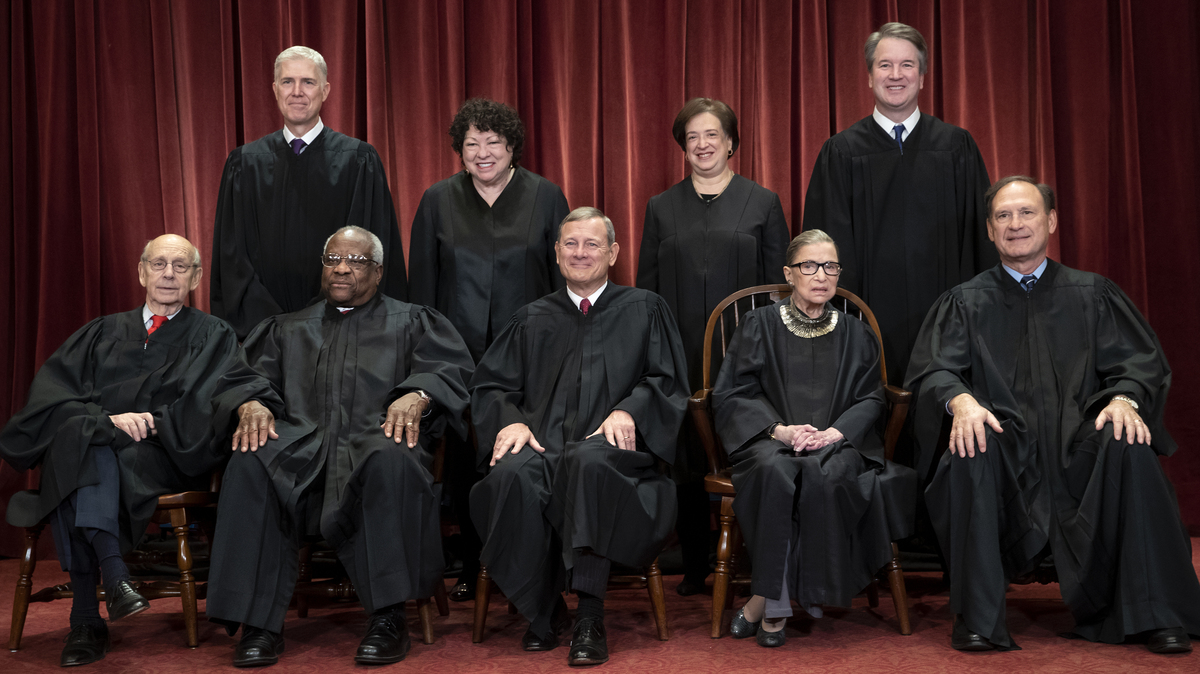 The Supreme Court justices, pictured in November 2018, start a new term on Monday.

The Supreme Court may be eager to portray itself as an apolitical institution. But this term, political questions writ large are knocking at the high court door.

The upcoming term will almost surely be a march to the right on almost every issue that is a flashpoint in American society. Among them: abortion, guns, gay rights, the separation of church and state, immigration and presidential power.

Also headed to the court are cases testing the power of Congress to get information from the executive branch and elsewhere, information that is relevant to congressional oversight and potentially, to impeachment.

Clearly, President Trump had something like that in mind when he said of the current impeachment inquiry, "It shouldn't be allowed. There should be a way of stopping it, maybe legally through the courts."

And if that isn't enough, pending before the court is a sleeper case testing the very structure of our presidential election system.

The Supreme Court, by tradition, has tried to stay out of big controversies in an election year. But the justices, even if reticent, don't always have control over their docket. When the lower courts are divided on major questions, the justices cannot always escape their responsibility to be the final decider.

Here are themes to watch:

Some justices are itching to play their conservative cards

The Supreme Court is a very different place since the 2018 retirement of Justice Anthony Kennedy, a centrist conservative, who often cast the deciding vote in closely contested cases. With President Trump's appointment of Justice Brett Kavanaugh to replace him, hard-core conservatives now have a firm majority on the court. And some of them have been itching for quite some time to reverse Roe v. Wade, to expand gun rights, religious rights and more.

If there is a new swing justice now, it likely will be Chief Justice John Roberts. But his swings to the left have been rare indeed — upholding Obamacare in 2012, and seven years later, repudiating the citizenship question on the census.

SCOTUSblog publisher Tom Goldstein calls the chief justice "a solid conservative vote." The disagreement among the five justices on the right of the court, he adds, has been, "How fast do you move?"

Is the right to abortion going to be struck down?

The first place that disagreement could become apparent is on abortion, in a case that asks the court to essentially reverse a 2016 decision that struck down a Texas law making it very difficult for clinics that perform abortions to exist. And now the Supreme Court has agreed to hear arguments in a case that presents a nearly identical law from Louisiana.

Goldstein, who frequently argues cases before the court, expects the conservative court majority to eventually reverse Roe v. Wade outright, or to hollow it out.

At a time when voters seem to approve of more gun regulation, the court seems headed in the opposite direction. Before the court is the first major test of gun regulations in the more than 10 years since the justices ruled that there is a constitutional right to own a gun for self-defense in one's home.

Court observers have long attributed the hiatus on gun cases to a closely divided court on which neither the four conservatives, nor the four liberals, were sure how Justice Kennedy would cast his deciding vote.

But now Kennedy is retired, replaced by Kavanaugh, who as a lower court judge was an outspoken critic of gun regulations and a strong supporter of expansive gun rights.

New Calls To Impeach Justice Kavanaugh: How It Would Work And Why It Likely Won't

How separate should church and state be?

Also before the court this term are major questions involving the separation of church and state. For generations, the court sought to erect a relatively high wall of separation. But that has begun to change, and religious rights advocates are poised to pounce.

"I actually can't recall a time in the last 20 years where there were so many cases ready for decision" in this area of the law, says Mark Rienzi, president of The Becket Fund for Religious Liberty.

In particular, Rienzi and others have set their sights on invalidating or undermining provisions in most state constitutions that bar direct or indirect aid to religious schools.

"The mood music at the court" is that the justices "would probably say that's just discrimination on the basis of religion, and that's forbidden by the federal Constitution," says former Solicitor General Paul Clement.

Can an employer fire an employee because he is gay?

The 1964 Civil Rights Act bars discrimination in employment "because of sex." The fired employees contend that that language protects them from such discharges. The employers argue that the law was never meant to cover gay or transgender employees.

A victory for the LGBTQ community would be "huge," says Georgetown University Law professor Paul Smith, who notes that discrimination against gay and trans individuals remains "rampant," especially in the private sector.

Then too, there are a variety of immigration cases, the biggest being the Trump administration's attempt to roll back the Obama administration program that continues to protect from deportation some 700,000-800,000 "Dreamers" brought to the U.S. by their parents, without legal authorization, when they were children.

Multiple cases are on "rocket ships headed towards the Supreme Court," notes SCOTUSblog's Goldstein. That, he says, is "because the president has been so aggressive in asserting his immunity from investigations," whether they are criminal investigations, subpoenas for his financial records, or potentially records relating to the impeachment inquiry.

The court, as Goldstein observes, is going to "hate the idea" of tackling these cases in a presidential election year, but "they may not have a way out."

Faithless electors, the Electoral College and the 2020 election

Finally, pending before the court is a case that could involve the 2020 election. It is a test of " faithless elector" laws. These are laws passed in many states that impose penalties on Electoral College delegates or sometimes provide for the removal of electors who refuse to vote for the presidential candidate of their designated party.

The question is: Are these laws constitutional? The Supreme Court has never before weighed in on the issue.

There have been 167 faithless electors in the history of the United States, and in no case has the outcome of an election turned on the vote of these electors. But there is no guarantee that won't happen in 2020.