Accessibility links
Singer Anthony Roth Costanzo: From Nearly Losing His Voice To Starring In Philip Glass' 'Akhnaten' Ten years ago, Costanzo had surgery that threatened to destroy his singing voice. Now the countertenor is starring as a gender-fluid Egyptian pharaoh in a new production by the Metropolitan Opera. 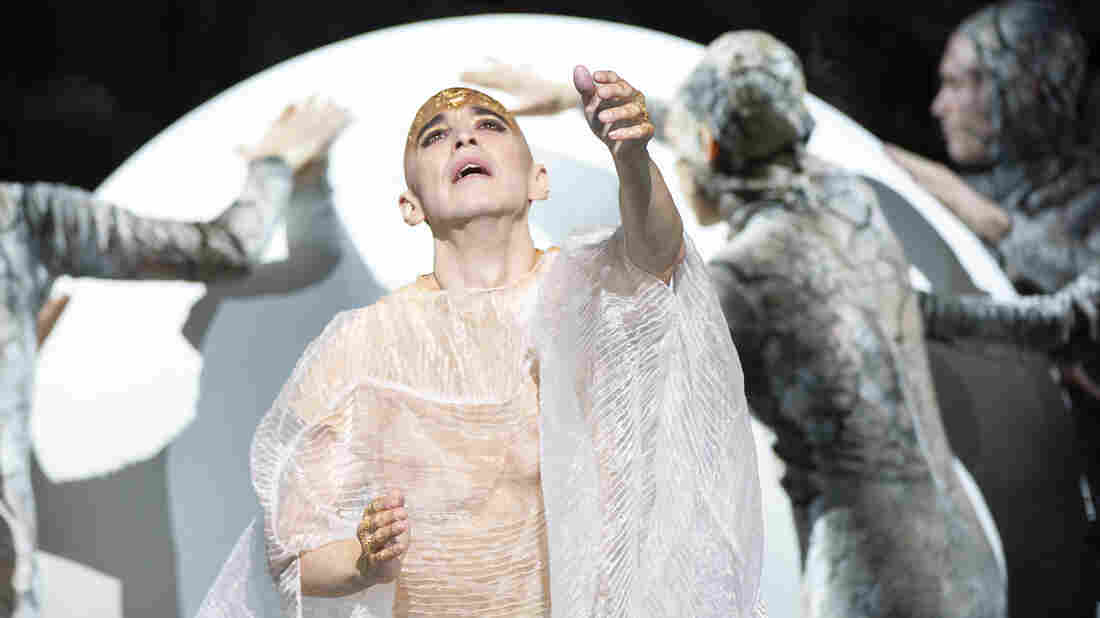 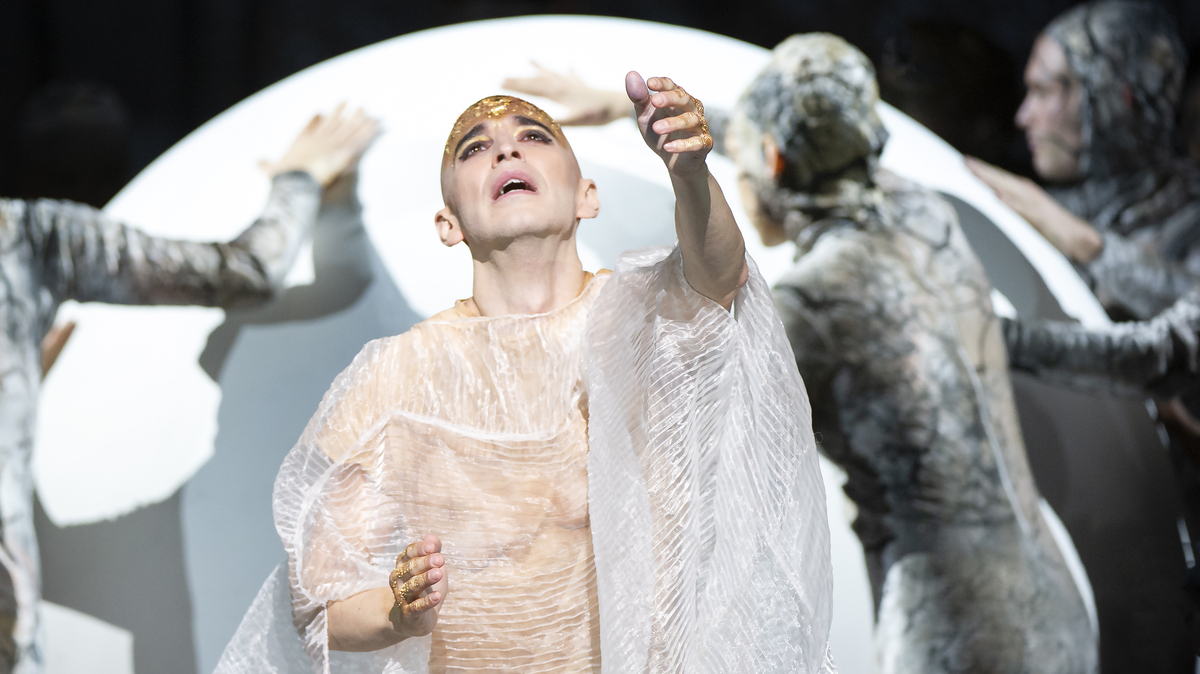 On November 8, singer Anthony Roth Costanzo will take center stage at the Metropolitan Opera, debuting as the star of a new production of Philip Glass' opera Akhnaten. It's a remarkable turn for a celebrated singer who nearly lost his voice to thyroid cancer.

Ten years ago, Costanzo needed surgery to excise cancerous tissue from the nerves that control vocal functioning — a task he was told was like "getting gum out of hair." His surgeon warned him that a vocal nerve may get nicked during the operation, which could damage his singing voice. Costanzo began to contemplate alternate career paths.

"I had to really think to myself, 'OK, well what is my identity?' " Costanzo says. "I'd spent my whole life singing and I realized that ... I like producing, and I could figure something out."

But after two surgeries, Costanzo was relieved to find he still had a voice. He began working with his vocal coach, beginning with just two minutes a day for six weeks. "We built up to singing an aria," he says "And the next year I won the Metropolitan Opera Competition and I had a career."

Costanzo, a countertenor, sings in a high range that's often associated with women's voices. Nevertheless, "I don't associate ... the pitch with gender," he says. "It feels very much me. And one thing my upbringing and all of my experiences have taught me is to just be myself."

"I was talking to all these Egyptologists as I was researching the role, and I went to Oxford where Richard Parkinson, a great Egyptologist, and his colleagues met with me, and I said, 'Was he really a hermaphrodite? Did he have both body parts?' And he said, 'Well he's always depicted with these very big hips and full lips and almost breasts. So that's why people think that.' But they posited this other theory, which is that he saw God as the unification of man and woman — not a man or a woman — and he wanted to be closer to God. ... I do think of him as the first trans icon, and very fluid, and that's really represented in our production."

On making his entrance in Akhnaten

"I enter completely stark naked — probably the first full-frontal male nudity at the Met. And it goes on for quite a while in slow motion — six minutes. So you see this very male figure emerge and then, over the course of the opera, I kind of transform into someone with these more feminine features. ... I wear these gauzy Egyptian linen pleated robes and underneath them the costume designer Kevin Pollard and the director Phelim McDermott have chosen this slip that has printed [on it] a woman's body, a kind of painted woman's body, but from far away — and even from 10 feet away — it looks like breasts and women's genitals. It's not graphic in any way, but it is rather very beautiful. And so you see this trajectory of Aknhaten's transformation of thought and also body."

"What's amazing about singing is that the muscles involved in it are involuntary. And so how do we control them? And the only answer is with imagery, really with the mind. And there's a great book by Thomas Hemsley, called Singing and Imagination, and he talks about how the mind fires a set of impulses, and they have an effect on the muscles and then you have to sort of follow the Pavlovian principles and you have to teach those muscles what you want them to do.

"So when I'm singing a high note, my great teacher, a teacher I've been with 21 years, might say in her very dramatic way, 'Anthony, imagine that a flower is opening when you hit that note.' And so I would imagine, in the voice of [my teacher] Joan Patenaude-Yarnell, 'You're now a rose, but opening.' And that teaches my muscles to do a particular thing, that image. And so when I go on stage, if I've taught my muscles well, all I have to do is picture that."

On the historical link between "castrati" and opera

"As opera is beginning in 1599, the first 'castrati' appear in history in the logs of the Vatican chapel choir book, and a castrato is — and forgive me everyone who's listening; it always makes the men cross their legs when I say this — a man who, before the age of puberty, has had their testicles usually crushed between two stones. And this was a practice that started in 1599 as far as we know, and what that did was to preserve the high voice as these men's bodies grew. And so they would have the resonating chamber of an adult but the vocal cords basically of a boy soprano.

"[The castrati] brought opera to the public. It became a public art form about 25 years later, in 1625 in Venice, because these castrated singers had made their way into the art form and the public loved them. ... These castrati became kind of the rock stars of their era, with women and men wearing little portraits of them on buckles and on belts and around their neck. ... Music was written for them by not only Handel, but Gluck and Mozart and Monteverdi and Vivaldi and all of these composers that you've heard of, were writing for castrated men. And these were the men who were who were leading the opera world. ... It's a kind of terrifying and fascinating thing that is at the root of opera's success."

Amy Salit and Seth Kelley produced and edited the audio of this interview. Bridget Bentz and Andrew Flanagan adapted it for the Web.