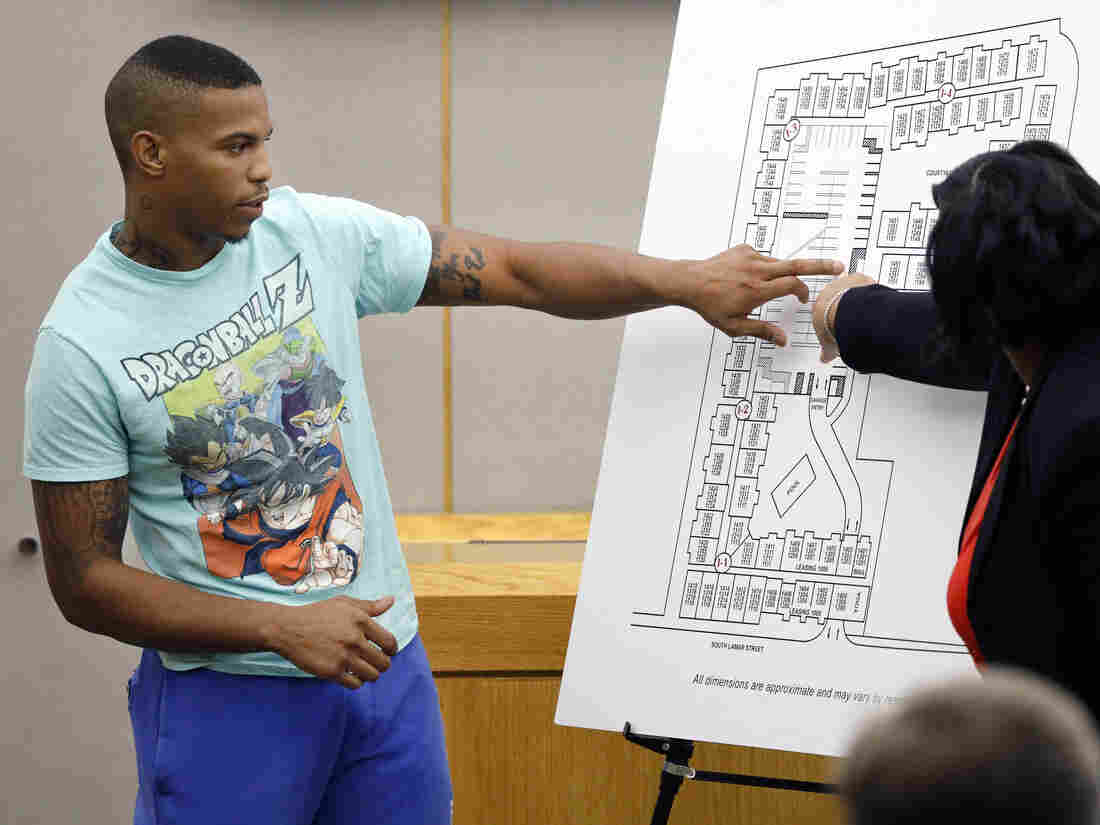 Joshua Brown answers questions from prosecutors while pointing to a map of the South Side Flats apartment complex during the murder trial of former Dallas police officer Amber Guyger. Ten days after his testimony, Brown was found shot to death. Tom Fox/AP hide caption 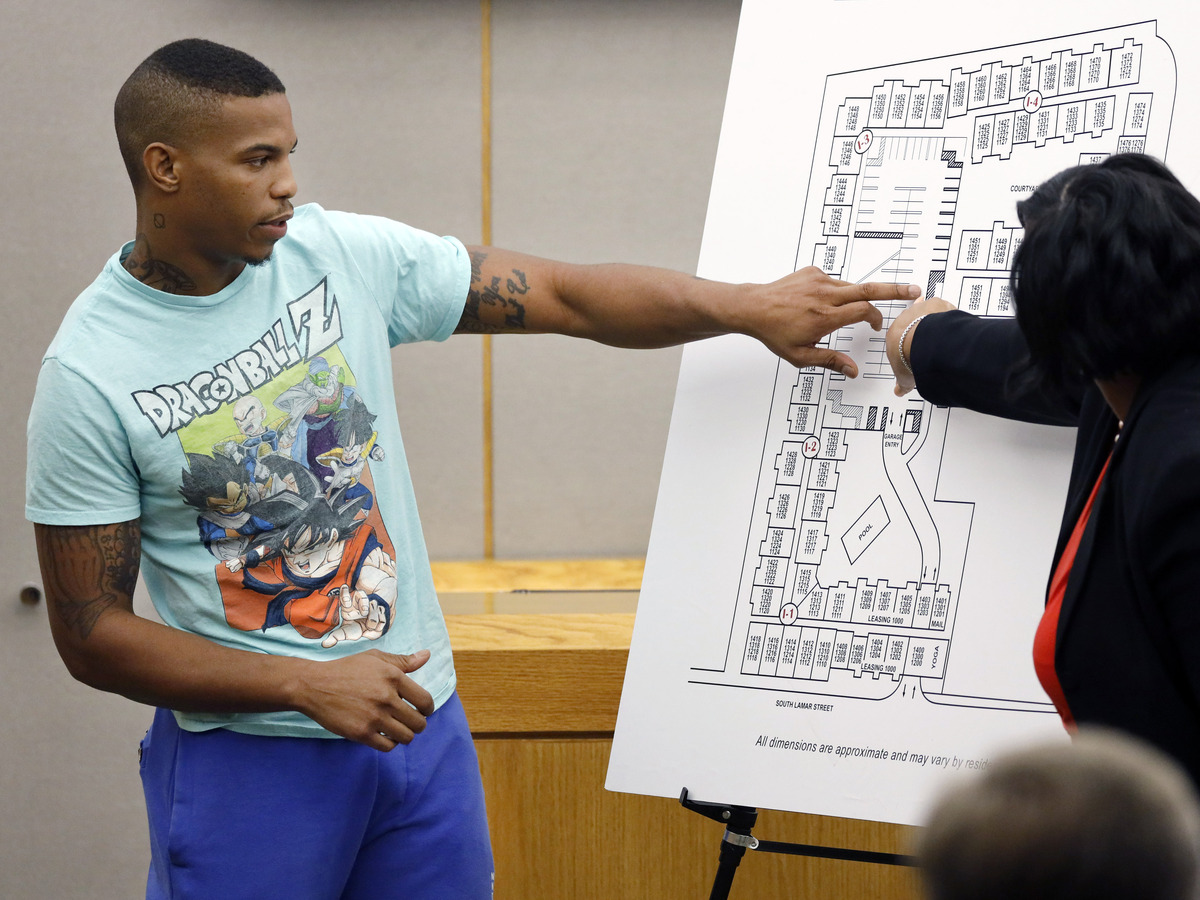 Joshua Brown answers questions from prosecutors while pointing to a map of the South Side Flats apartment complex during the murder trial of former Dallas police officer Amber Guyger. Ten days after his testimony, Brown was found shot to death.

The Dallas community is stunned and searching for answers following the shooting death of a 28-year-old man who delivered key testimony in the trial of Amber Guyger, a former police officer. Guyger was convicted of murder and sentenced to 10 years in prison in the slaying of her upstairs neighbor Botham Jean at the apartment complex where all three lived.

Authorities say Joshua Brown was found with multiple gunshot wounds in a parking lot about 4 miles away from the apartment complex where Jean was shot and killed. Brown was pronounced dead at a local hospital on Friday, 10 days after taking the witness stand.

As word of Brown's death spread around the U.S., Dallas Mayor Eric Johnson urged the public to "refrain from speculation" about whether there is any link to the Guyger case, saying police will "conduct a thorough investigation into the death."

Brown, 28, was born in Jacksonville, Fla., and graduated from South Florida State College. He managed Airbnb units in Los Angeles and Atlanta and was working to get up and running in Dallas, where he and his family lived.

Brown had three children — a 6-year-old and two toddlers — according to his father.

"He was moving on with his life," Harold Brown, his father, told NPR, recalling a conversation he had with his son after the court testimony. He said he has been in touch with authorities investigating his son's death.

"I just hope they figure it out," Harold Brown said in an interview.

His son's emotional testimony about what he saw and heard before and after Guyger fired two shots into the apartment of Jean, a 26-year-old accountant from the Caribbean island nation of St. Lucia, factored into the jury's decision to convict Guyger.

Joshua Brown lived across the hall from Jean. Brown told the jury that on Sept. 6, 2018, he was heading back to his apartment after watching a football game and heard two people who seemed "surprised" to meet each other and that almost immediately two gunshots rang out.

When asked by prosecutors if he heard Guyger say "put your hands up" — which she testified she had ordered Jean to do — Brown said he had not.

The sound of gunfire sent Brown running for cover. Once inside his apartment, he testified, he watched a sobbing Guyger pace back and forth in front of Jean's door while on the phone, telling the person on the other end of the call that she had mistaken the apartment for her own.

Describing the death of his neighbor drew an emotional response from Brown, who recalled hearing Jean singing gospel music or Drake songs in his apartment — memories that prompted Brown to wipe away tears with his bright teal T-shirt.

The judge ordered a break in testimony until Brown could regain his composure. 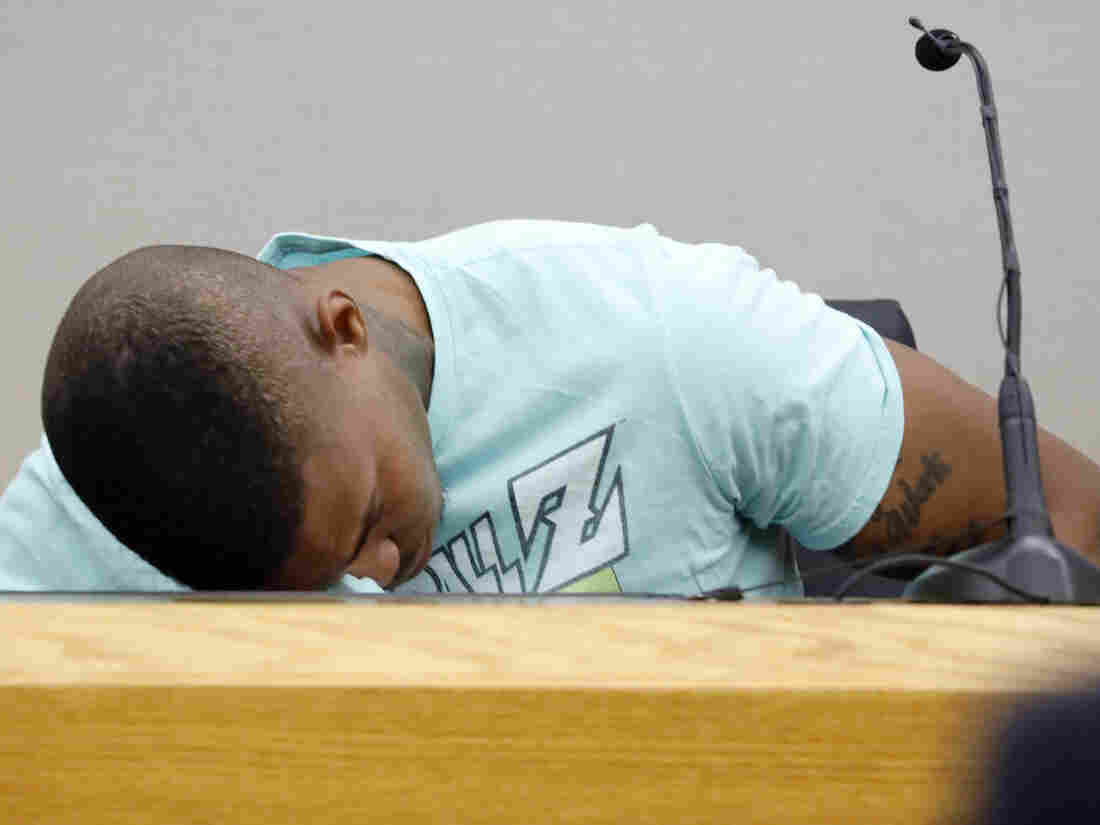 Joshua Brown, a neighbor of victim Botham Jean, is overcome with emotion while giving testimony in court in Dallas during the murder trial of Amber Guyger. Ten days after his testimony, Brown was killed in a shooting that remains under investigation. Tom Fox/AP hide caption 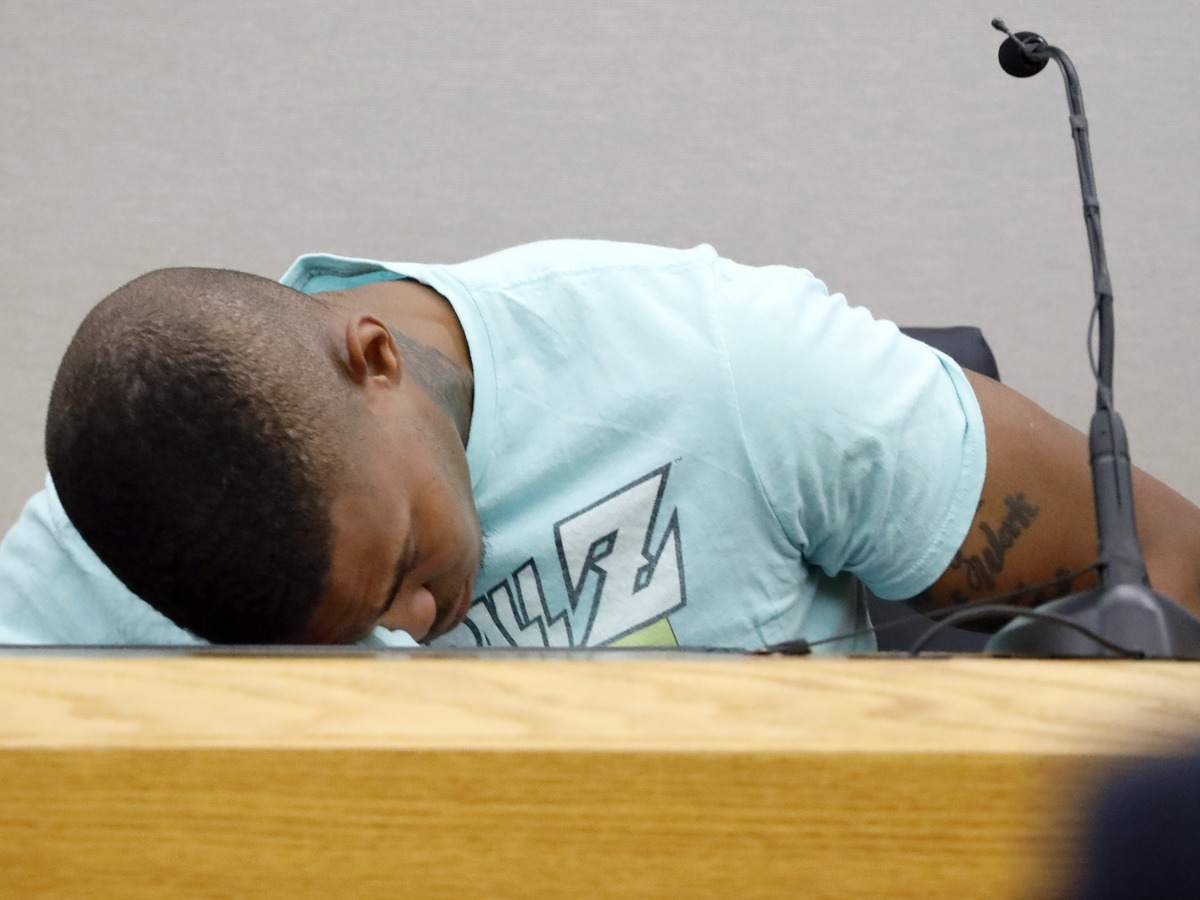 Joshua Brown, a neighbor of victim Botham Jean, is overcome with emotion while giving testimony in court in Dallas during the murder trial of Amber Guyger. Ten days after his testimony, Brown was killed in a shooting that remains under investigation.

On Sunday, the Dallas Police Department publicly identified Brown as the victim in the parking lot of the apartment complex where he moved after Jean's death. Authorities said they had not identified any suspects or motives.

"We are committed to solving this case and will work diligently to apprehend the individuals responsible for Brown's death," Dallas police said in a statement.

Lawyer S. Lee Merritt, who represented the Jean family and is now an attorney for Brown's family, said in a statement that the 28-year-old former college athlete "lived in constant fear that he could be the next victim of gun violence."

Merritt said Brown had been shot last year when a birthday party at a club in Dallas turned violent. A gunman fired at Brown and some of his friends, hitting Brown in the foot. One person was killed.

"A lot of people believe, including himself, apparently, that he was the target of that shooting, and he was afraid somebody might come and try to finish the job," Merritt said in an interview with Black America Web.

Merritt, who did not respond to NPR's requests for an interview, is calling for an outside law enforcement agency like the county's sheriff's department or federal investigators to take over the probe of Brown's death.

"Whether they like it or not, the Dallas Police Department is implicated in this," he said.

The NAACP Legal Defense Fund is also asking for an independent investigation into Brown's death, calling the killing "deeply alarming and highly suspicious."

"The circumstances surrounding the murder of Mr. Brown cries out for answers. Most importantly, it demands an independent investigation of how and why he was killed," said Sherrilyn Ifill, the Legal Defense Fund's president and director-counsel.

"We urge state or federal authorities to follow the trail of misconduct left by this case and fully investigate the circumstances surrounding Mr. Brown's death," Ifill said.

The police department said in response that it had no comment.

Harold Brown said he has no idea whether his son's death is related to the shooting his son was involved in at the club last year or is somehow connected to his son's court testimony, but the last he heard from Dallas police indicated that investigators were fielding an outpouring of tips.

"They said people have been talking who know stuff," Brown said. "So I really hope they know something that will help."