Accessibility links
'Not One Drop Of Blood': Cattle Mysteriously Mutilated In Oregon In remote eastern Oregon, a serial crime is unfolding. Someone is killing purebred bulls. And they're doing it with a level of cruel precision that's frightening to both ranchers and law enforcement. 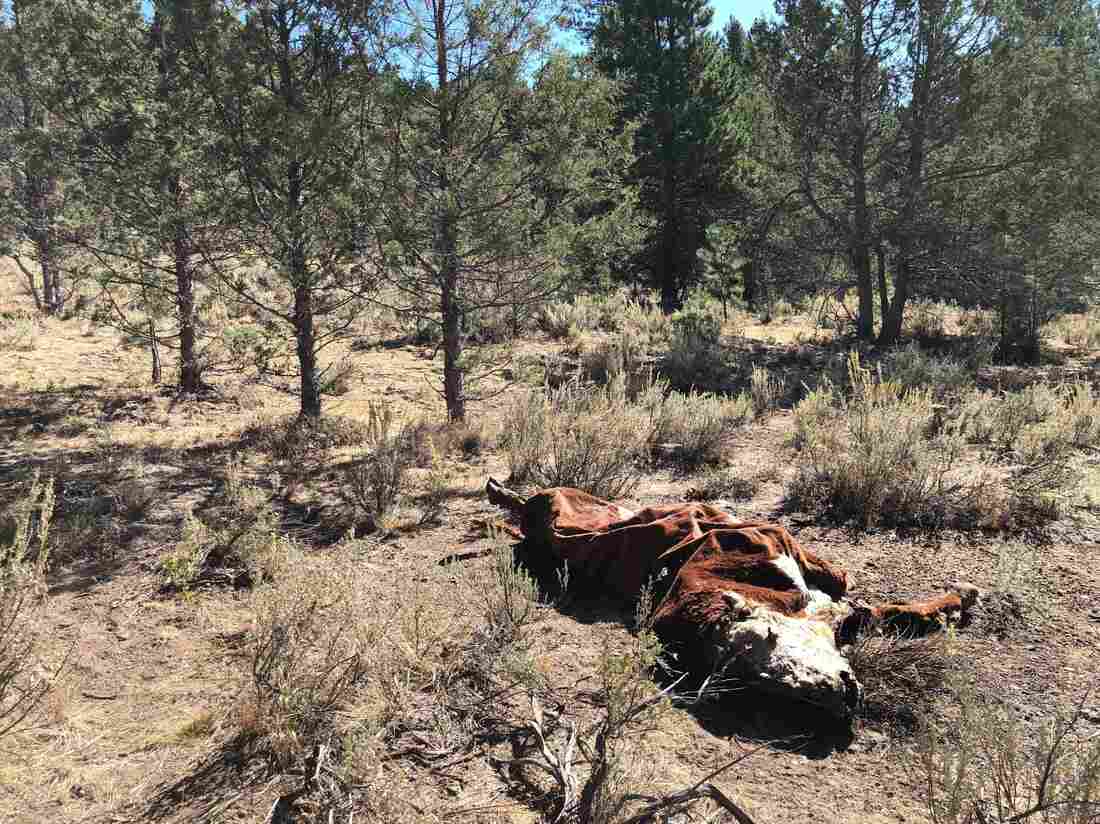 The crumpled carcass of a bull lies on U.S. Forest Service ground. It was among several killed and mutilated this summer in eastern Oregon. Anna King/Northwest News Network hide caption 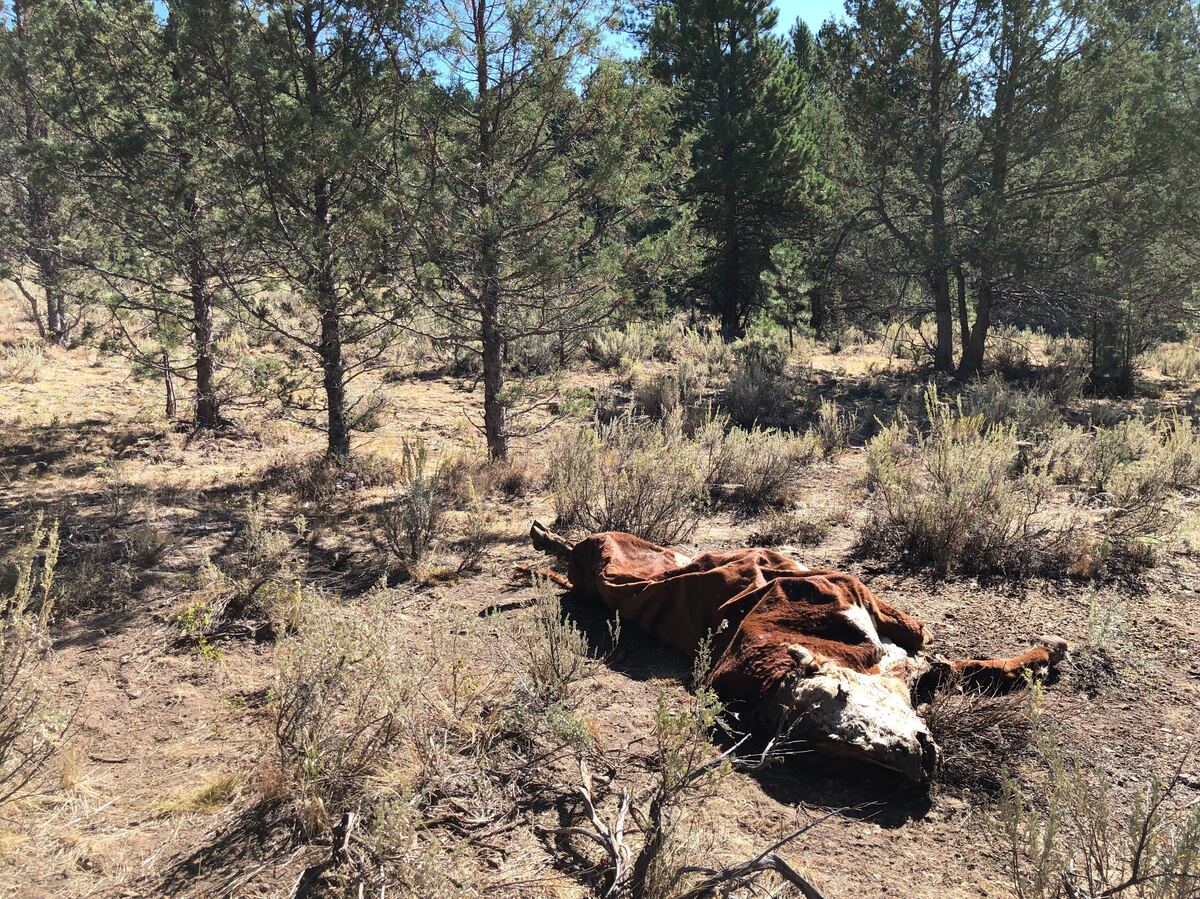 The crumpled carcass of a bull lies on U.S. Forest Service ground. It was among several killed and mutilated this summer in eastern Oregon.

In the early morning light, dust from hooves creates a fog at Silvies Valley Ranch in remote eastern Oregon. Cowboys whistle and talk low to their eager herding dogs. They're moving the cattle from one vast, sage-studded range to another.

Five young purebred bulls mysteriously showed up dead on the ranch this past summer, drained of blood and with body parts precisely removed.

"Then we'll get out and take a little walk to where one of the bulls was found. And the carcass is still there," Marshall says.

Coming upon one of the dead bulls is an eerie scene. The forest is hot and still, apart from a raven's repeating caw. The bull looks like a giant, deflated plush toy. It smells. Weirdly, there are no signs of buzzards, coyotes or other scavengers. His red coat is as shiny as if he were going to the fair, but he's bloodless and his tongue and genitals have been surgically cut out.

Marshall says these young livestock were just reaching their top value as breeding bulls. The animals are worth around $6,000 each. And since these were breeding bulls, hundreds of thousands of dollars' worth of future calves were lost too.

Finding these young Herefords in this remote country can sometimes take the ranch's experienced cowboys days. Ranch staff members are now required to ride in pairs and are encouraged to carry arms.

"It's rugged," Marshall says. "I mean this is the frontier. If some person, or persons, has the ability to take down a 2,000-pound range bull, you know, it's not inconceivable that they wouldn't have a lot of problems dealing with a 180-pound cowboy."

Harney County Sheriff's Deputy Dan Jenkins has been working the cattle cases and has gotten dozens of calls from all over offering tips and suggestions.

"A lot of people lean toward the aliens," Jenkins says. "One caller had told us to look for basically a depression under the carcass. 'Cause he said that the alien ships will kinda beam the cow up and do whatever they are going to do with it. Then they just drop them from a great height." 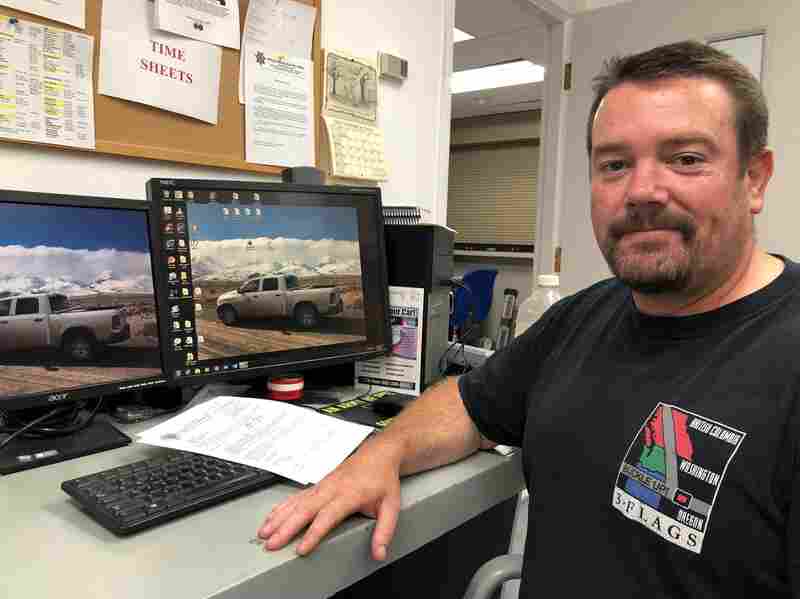 Jenkins says the cases have been tough, with little evidence and no credible leads.

On his whiteboard, he has a running list scrawled in green marker with the top theories. What's clear: It isn't bears, wolves, cougars or poisonous plants. Nor were the animals shot.

The FBI won't confirm or deny that it's looking into the multiple slaughters.

Two years ago and 200 miles south, near New Princeton, Ore., one of Andie Davies' cows was also found cut up and bloodless.

She and her husband drove concentric circles around the corpse, but they never found any tracks.

And in this dusty country, "everything you do leaves tracks," Davies says.

Back in the 1980s, one of Terry Anderson's mother cows was mysteriously killed overnight. Standing at his ranch near Pendleton, Ore., Anderson points to the exact spot where he found her on top of a mountain.

He remembers his cow lying dead, her udder removed with something razor sharp.

"And not one drop of blood anywhere," Anderson says.

He has never gotten over it.

"It's just left a really strange feeling with me since that day. You can't explain it," Anderson says. "And, you know, no one else has been able to explain it."

The Harney County Sheriff's Office continues to field calls on the killings. And Silvies Valley Ranch has put up a $25,000 reward for information that could solve the case.