Accessibility links
Pope Opens Amazon Summit Amid Controversy Over Proposal To Allow Married Priests Even before the synod began, traditionalists were angered by the suggestion that, to offset a shortage of priests in the Amazon, married men might be ordained to serve in remote communities. 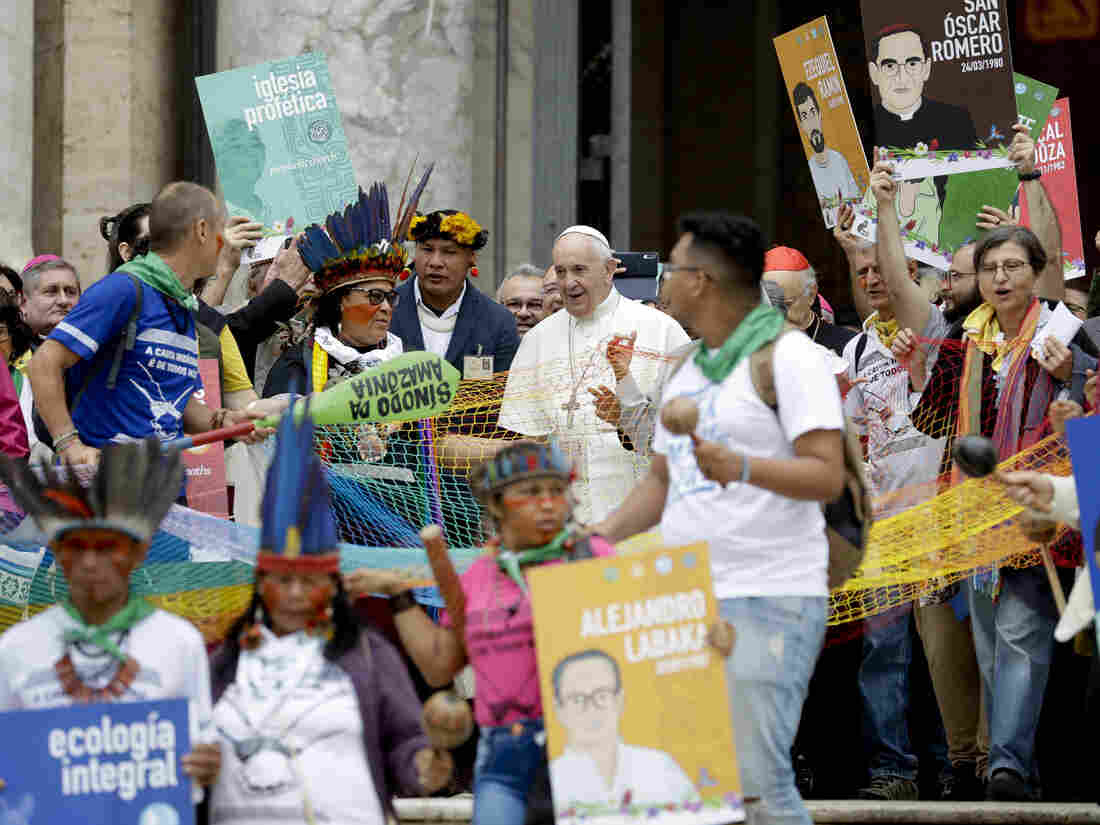 Pope Francis walks in procession on the occasion of the Amazon synod at the Vatican on Monday. The pope opened a three-week meeting as he fended off attacks from conservatives who are opposed to his ecological agenda. Andrew Medichini/AP hide caption 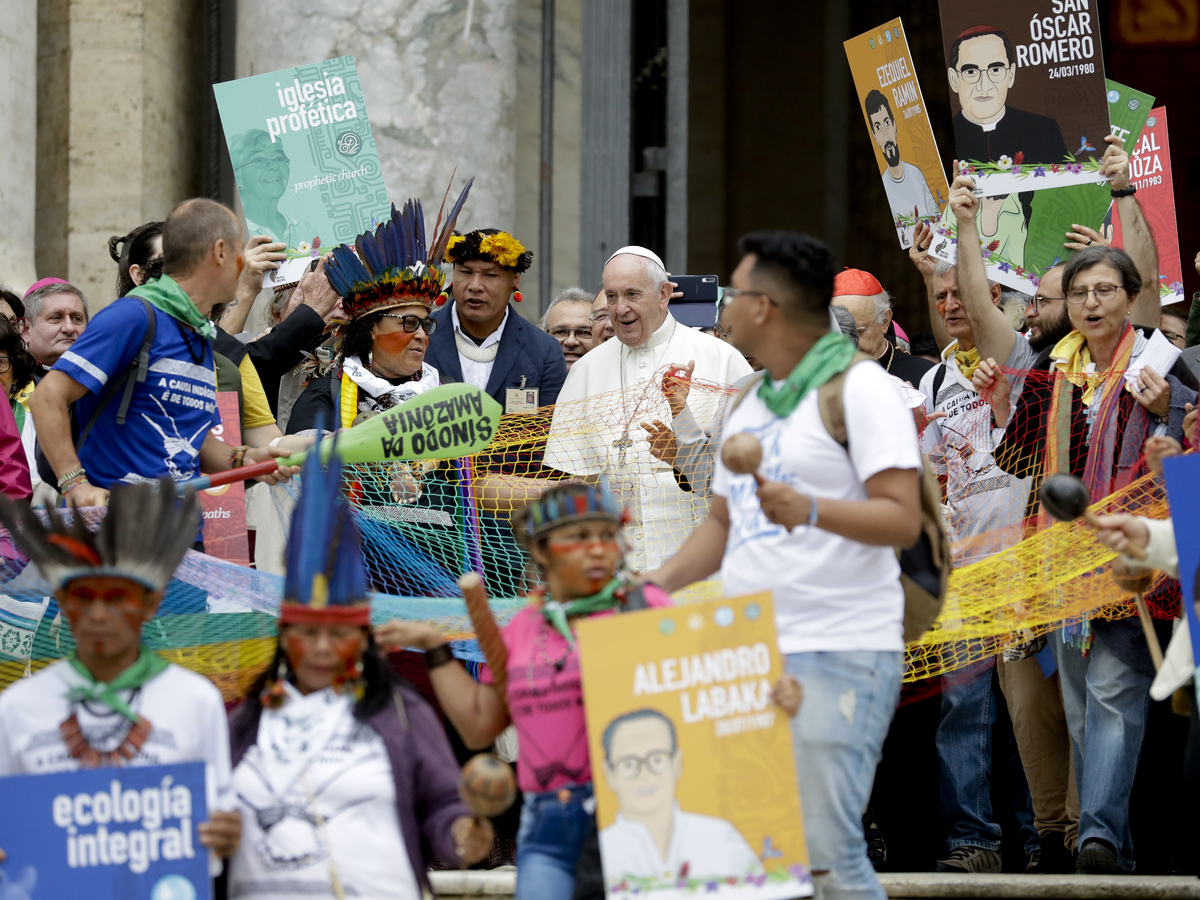 Pope Francis walks in procession on the occasion of the Amazon synod at the Vatican on Monday. The pope opened a three-week meeting as he fended off attacks from conservatives who are opposed to his ecological agenda.

On Sunday, Pope Francis opened a three-week bishops' assembly known as a synod, denouncing contemporary forms of colonialism and urging conservatives to be open to change.

The Synod of Bishops for the Pan-Amazon Region, held at the Vatican, is focusing on the environment and indigenous peoples' rights to their land and traditions. In addition to 185 bishops, mostly from the Amazon region, participants include scientists and environmentalists.

Another issue is how to strengthen Roman Catholicism in a region where evangelical churches are gaining a foothold.

But even before it started, the synod had angered Catholic traditionalists — particularly the suggestion that, to offset a shortage of priests in the Amazon region, the church might ordain older, married men to serve in remote communities. 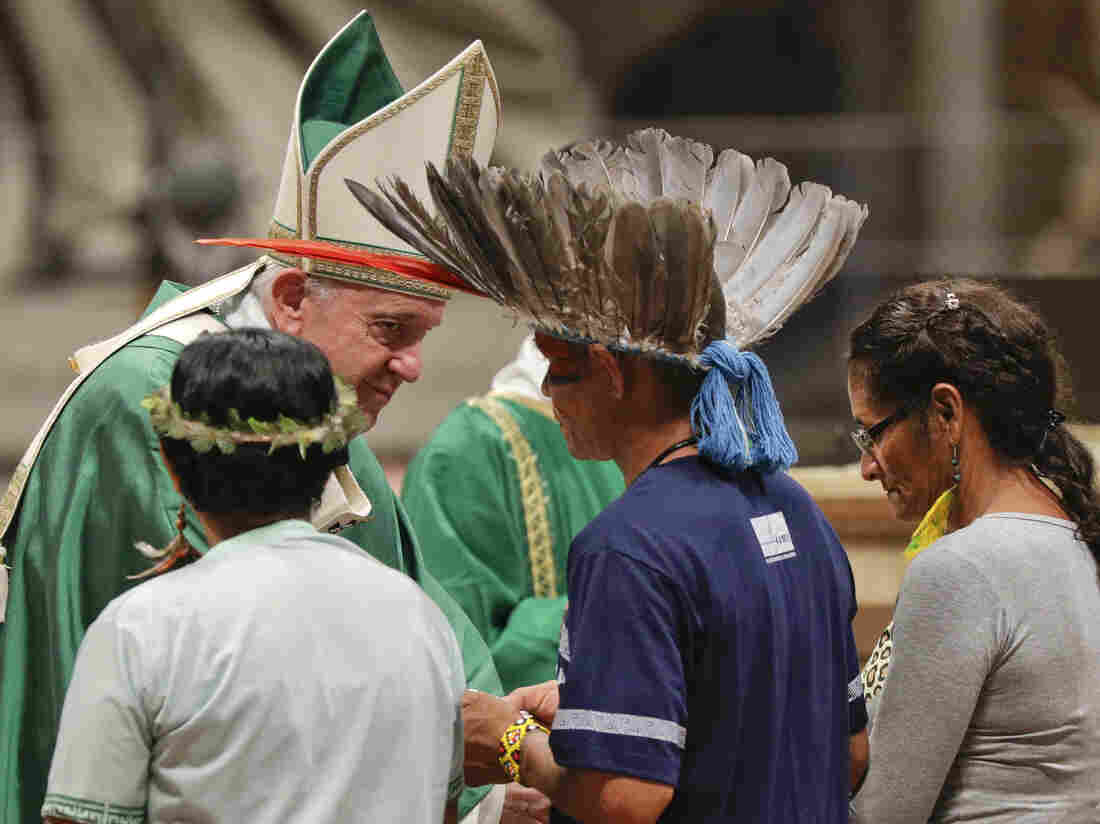 Indigenous peoples, some with their faces painted and wearing feathered headdresses, stand by Pope Francis as he celebrates an opening Mass for the Amazon synod on Sunday. Andrew Medichini/AP hide caption 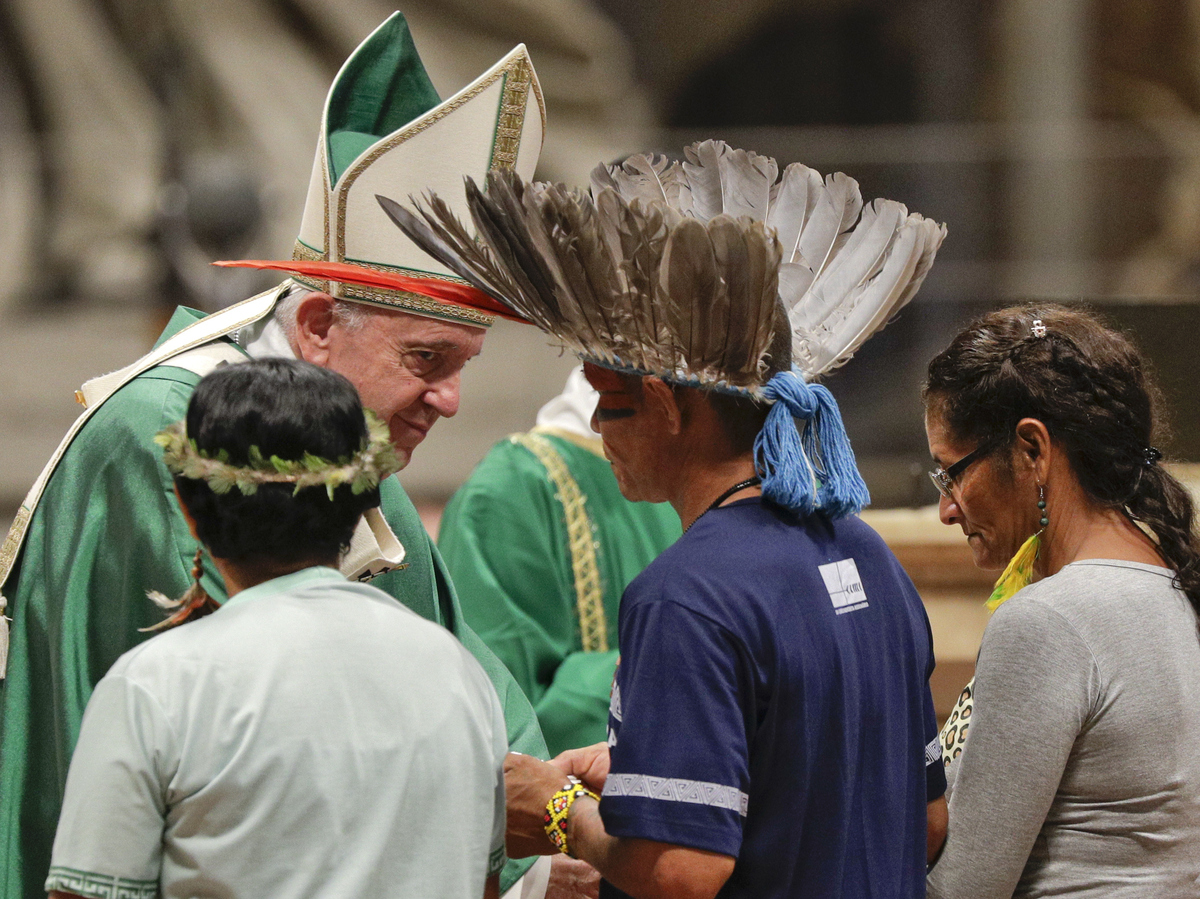 Indigenous peoples, some with their faces painted and wearing feathered headdresses, stand by Pope Francis as he celebrates an opening Mass for the Amazon synod on Sunday.

In his homily at the synod's opening Mass on Sunday, Francis called on bishops to shake up the status quo in improving ways to minister to the indigenous peoples of the Amazon — a region threatened, he said, by forest fires, greedy developers and what he called the "ashes of fear."

"May God preserve us from the greed of new forms of colonialism," the pope prayed before the bishops. "The fire set by interests that destroy, like the fire that recently devastated Amazonia, is not the fire of the Gospel. The fire of God is warmth that attracts and gathers into unity. It is fed by sharing, not by profits. The fire that destroys, on the other hand, blazes up when people want to promote only their own ideas, form their own group, wipe out differences in the attempt to make everyone and everything uniform."

Francis, the first pope from Latin America, has made the fate of the planet one of his signature issues. His landmark 2015 Encyclical "Laudato si" (Praise Be) is a passionate defense of the environment.

In 2017, he announced the Amazon synod to address the ecological, social and spiritual needs of the region's indigenous peoples and to protect their rain forests, ravaged by fires and deforestation caused by agribusiness, miners and loggers. Last year, when Francis traveled to the Peruvian Amazon, he called on corporations to end indiscriminate logging and extraction of gas and gold.

The Rev. Peter Hughes, an Irish missionary who has spent five decades in Latin America, stresses the link between Francis' encyclical and Amazon peoples' spiritual link with nature.

"The people of the Amazon, as we all know, have their own vision, their own cosmic vision of reality, where all of life is interconnected," he said. "This mantra of interconnectedness that the pope underlines is the bedrock of his spirituality and of Christian spirituality." 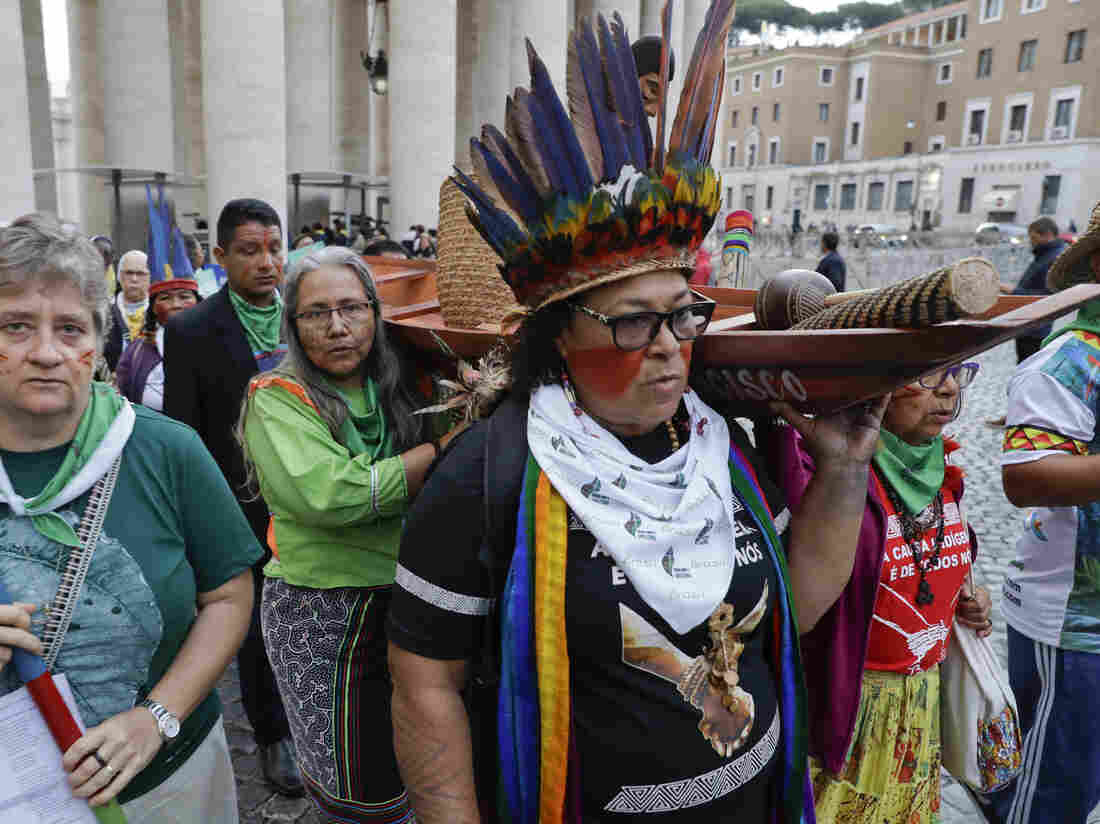 Participants in the Amazon synod arrive in St. Peter's Square, at the Vatican, on Monday. Andrew Medichini/AP hide caption 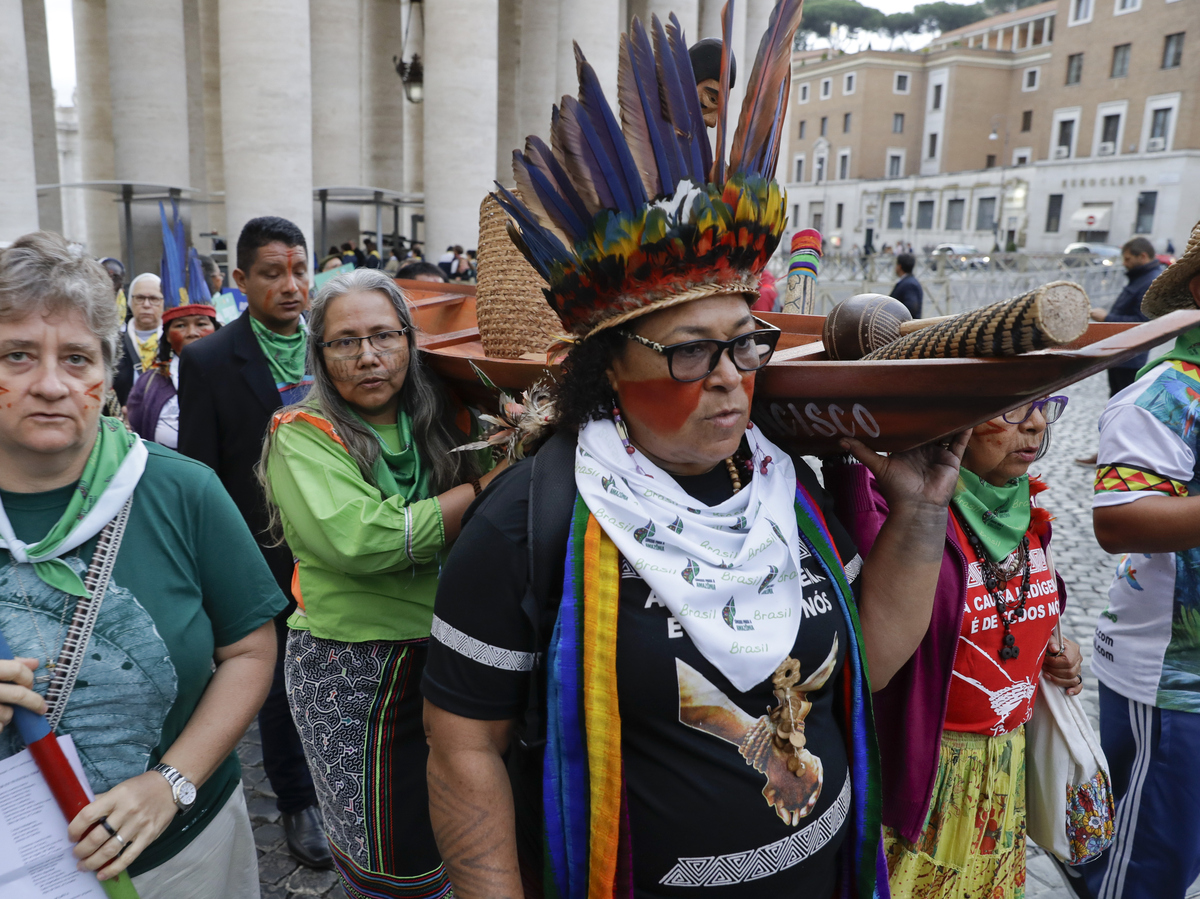 Participants in the Amazon synod arrive in St. Peter's Square, at the Vatican, on Monday.

Carlo Petrini, founder of the Slow Food movement, tells NPR the great novelty of this synod is that indigenous peoples will be the teachers; Catholic priests the students.

"This is revolutionary," he says. "For centuries in that region, the cross went hand-in-hand with the sword, destroying local cultures and spirituality. Now, it's the priests who must go through a process of inculturation, not the Amazon peoples. And Catholic conservatives are screaming, 'Heresy!' "

Some of the pope's opponents charge that the synod's working document was inspired by pagan, anti-Christian ideas. Conservative bloggers and websites also lashed out at a tree-planting ceremony on Saturday in the Vatican gardens, marking the feast day of St. Francis of Assisi.

Their anger was directed at the presentation of an indigenous wooden sculpture of a pregnant woman, which they interpreted as a pagan fertility idol rather than an image of the Virgin Mary. Some commentators, though, pointed out that the canon of Western art is filled with bare-breasted representations of the Virgin Mary.

On Monday, at the synod's first formal discussion session, Francis expressed indignation over a reaction he'd overheard to indigenous dress. "Yesterday I was very saddened to hear a sarcastic comment here about that pious man who brought the offerings with feathers on his head," he said in his speech. "Tell me, what difference is there between having feathers on your head and the three-cornered hat worn by some officials in our dicasteries?"

The synod's most controversial proposal concerns a shortage of priests in parts of the Amazon that prevents the faithful from attending Mass for many months. The synod's working document suggests the possibility of ordaining older, married men, highly respected in their communities.

One of the synod's main organizers, Brazilian Cardinal Cláudio Hummes, stresses that the proposal, for now, remains just that — a proposal. It stems from an unprecedented two-year listening exercise by local church leaders with 87,000 people across the nine countries of the Amazon basin. "It's the voice of the local church of the Amazon, of its people, its history and also the voice of its land," says Hummes.

In remote Amazonian communities that are only accessible by boat, villagers can go months without sacraments that only priests can celebrate, including Holy Communion and confessions.

Eastern Rite Catholic churches already allow married priests, but if approved, this reform would be an exception to the rule — not doctrine — of priestly celibacy in the far bigger Latin Rite Catholic Church. And that is a change that conservatives liken to apostasy — rejection of the Catholic religion. The pope's critics are already up in arms about his welcoming stance for homosexuals and his advocacy of economic justice, which they see as an attack on capitalism. 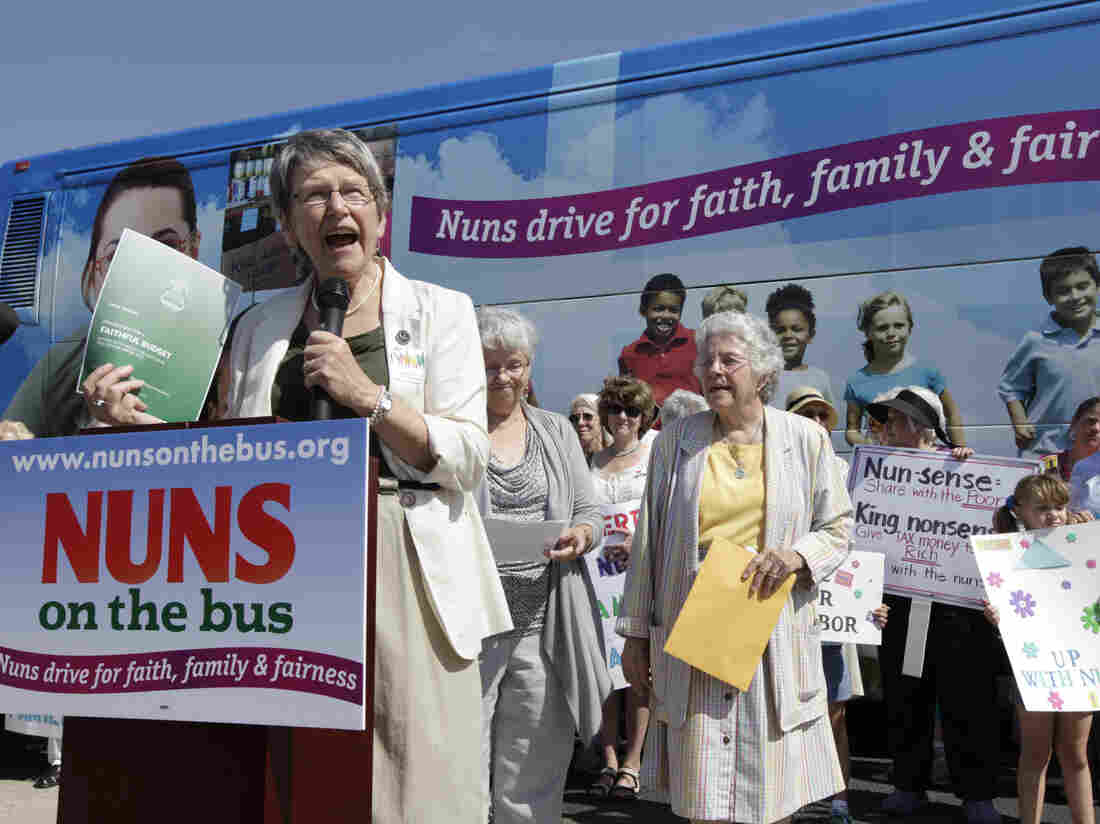 Sister Simone Campbell speaks during a stop on a Nuns on the Bus tour in 2012 in Ames, Iowa. Charlie Neibergall/AP hide caption 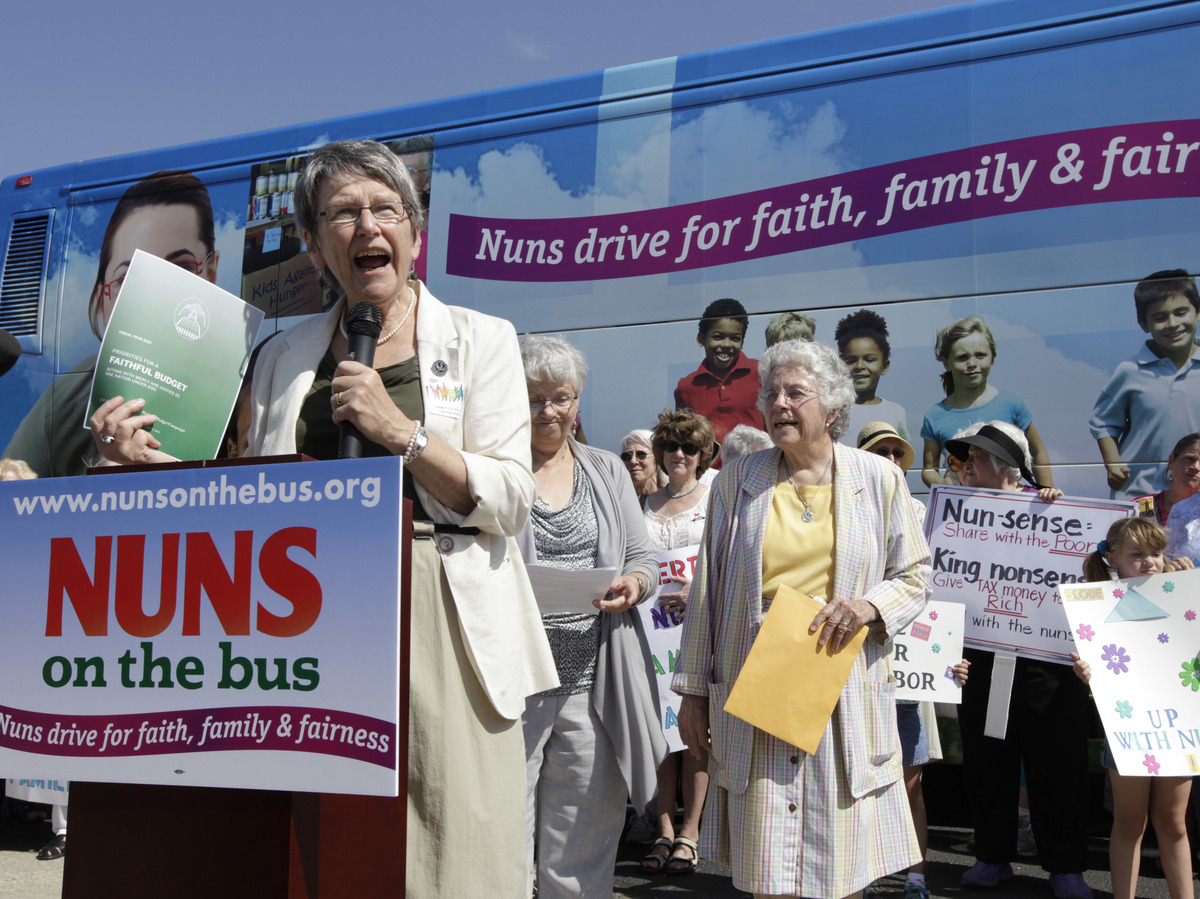 Sister Simone Campbell speaks during a stop on a Nuns on the Bus tour in 2012 in Ames, Iowa.

For these critics, the Amazon synod is the latest example of the pope's attempt to impose his progressive reforms on the Catholic Church.

But criticism of the synod is coming also from another side. "It seems to me that the purpose of the synod will be missed," says Sister Simone Campbell, the leader of the Nuns on the Bus campaign advocating social justice.

Speaking to reporters in Rome last week, the American nun said she had always thought the goal of synods was to improve the quality of the church in a region. "And what I discovered [was] yet again, the voices of the women who are the principal ministers in the Amazon region were going to be small in representation, but absolutely nothing in a vote."

The Vatican points out that more women are participating — 35 female experts and nuns — than in any previous synod. Campbell still hopes that synod rules can be adjusted to treat women as full participants, like men, with the right to vote.