Accessibility links
A Park In Kabul Gives Afghans Respite From The City, If Not From Worries Over Taliban The Babur Garden is a place of respite in an often chaotic city. "Do you think the Taliban will ever accept this?" asks one man, pointing to himself and his fiancée, strolling among blooming roses. 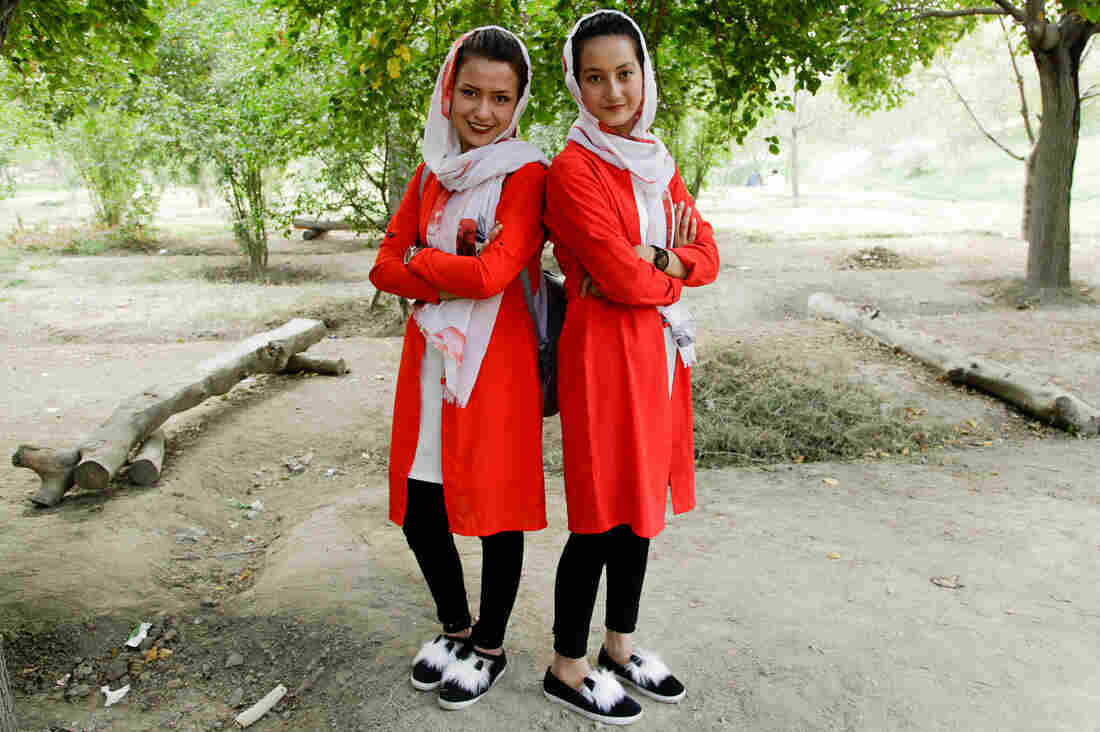 Farahnaz Mohammadi (left) and her cousin Fatima Almi both worry that the gains made by Afghan women since 2001 will be in jeopardy after a U.S.-Taliban deal is signed. Diaa Hadid/NPR hide caption 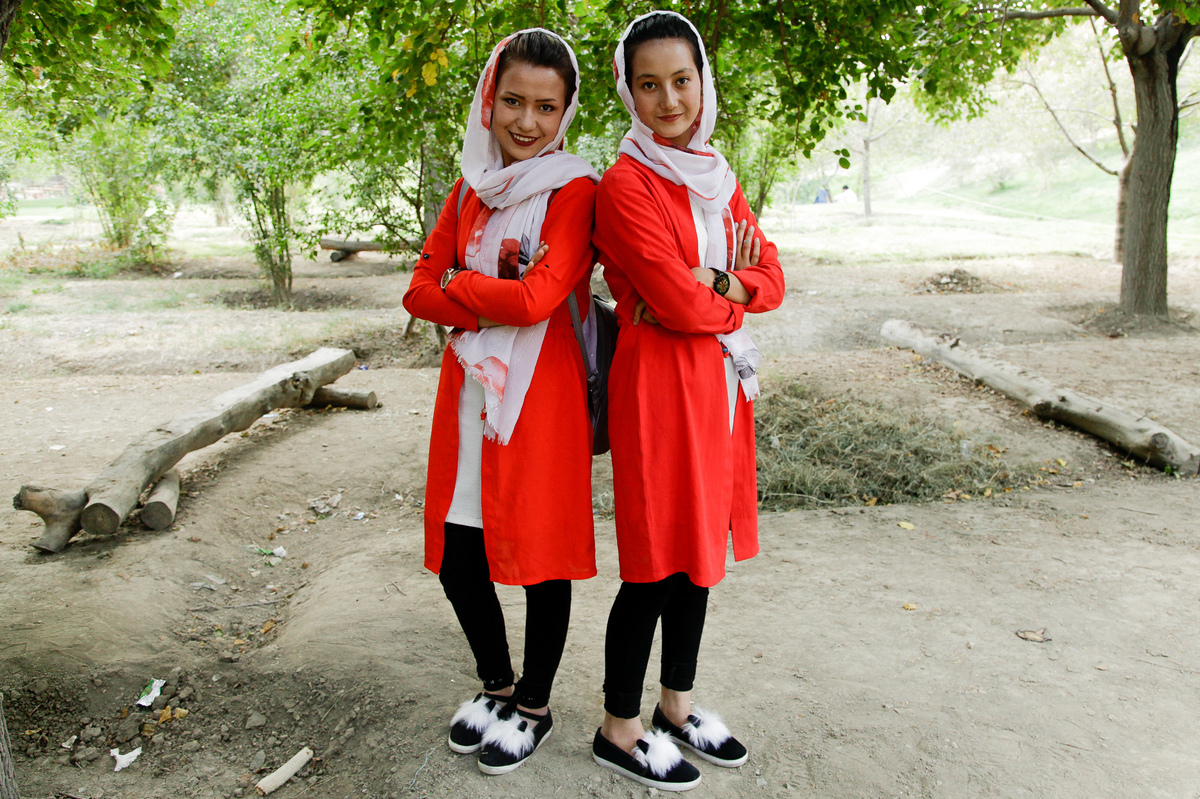 Farahnaz Mohammadi (left) and her cousin Fatima Almi both worry that the gains made by Afghan women since 2001 will be in jeopardy after a U.S.-Taliban deal is signed.

Farahnaz Mohammadi, 17, and her cousin Fatima Almi, 19, dress identically, from their patterned headscarves to their shoes with matching bunny ears. They also share the same opinions on Afghanistan's future, which may be nearing a critical phase as a deal between the U.S. and Taliban insurgents appears to be reviving.

That deal would likely see most American forces withdraw from Afghanistan, where they have been at war for 18 years. In exchange, the Taliban would not host global militant groups like al-Qaida and may adhere to some sort of ceasefire. It would also likely to allow the Taliban to reenter political life.

The two young women don't like it at all.

"We will go back to what we were," says Mohammadi, referring to a time before she was born, when the Taliban ruled much of Afghanistan and imposed harsh rules against women. "Girls will not be able to go to school. No lady would be able to work or go out and do anything."

Her cousin nods in agreement. Mohammadi's view was echoed by other women interviewed by NPR in Kabul. The capital is more liberal than other quarters of Afghanistan, yet the uniformity of the opinions suggests a broadly held concern.

The deal was abruptly called off by President Trump on Twitter in early September, after nearly a year's worth of negotiations. But the U.S. envoy leading the talks, Zalmay Khalilzad, met again with a Taliban delegation led by Mullah Baradar in Islamabad on Oct. 4, suggesting the two sides were exploring ways to restart negotiations.

The fears of ordinary Afghans are unlikely to be considered in a deal between the Taliban and the United States. But their opinions spotlight the concerns of those who ultimately will have to shoulder the consequences. 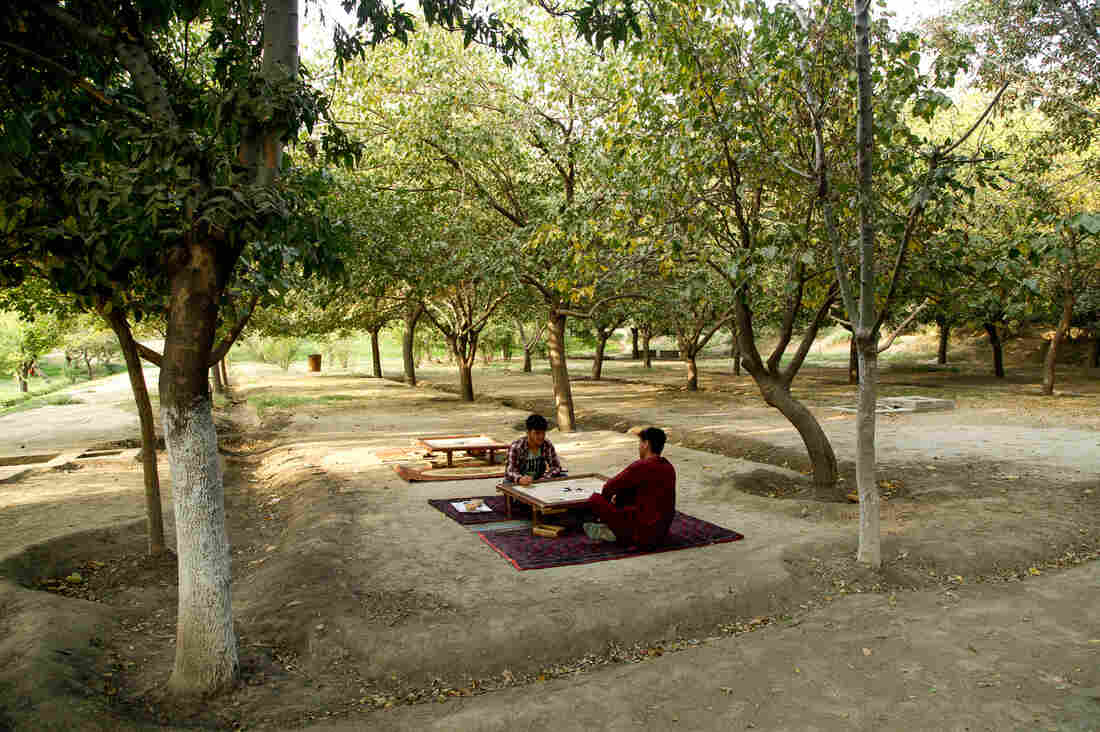 The Taliban have refused to allow the Afghan government to have any role in the talks, seeing it as a "stooge" of foreign forces. And a new Afghan government may be barely representative. Presidential elections were held on Sept. 28 but fewer than a quarter of 9.6 million registered voters cast ballots. Results are still being tabulated.

Mohammadi says she craves safety and security. But she has also benefited from the advances women have made with American forces helping to secure Afghan cities. Describing it as a "half-peace," she says even in those conditions, "girls can go out." She gestures around where she stands in Kabul's Babur Garden, a centuries-old park where orchards and grassy lawns provide a shelter of sorts from the city's dusty chaos, violence and politics.

They also form a counterpoint.

"Do you think the Taliban will ever accept this?" asks one young man, pointing to himself and his fiancée, strolling among blooming roses. 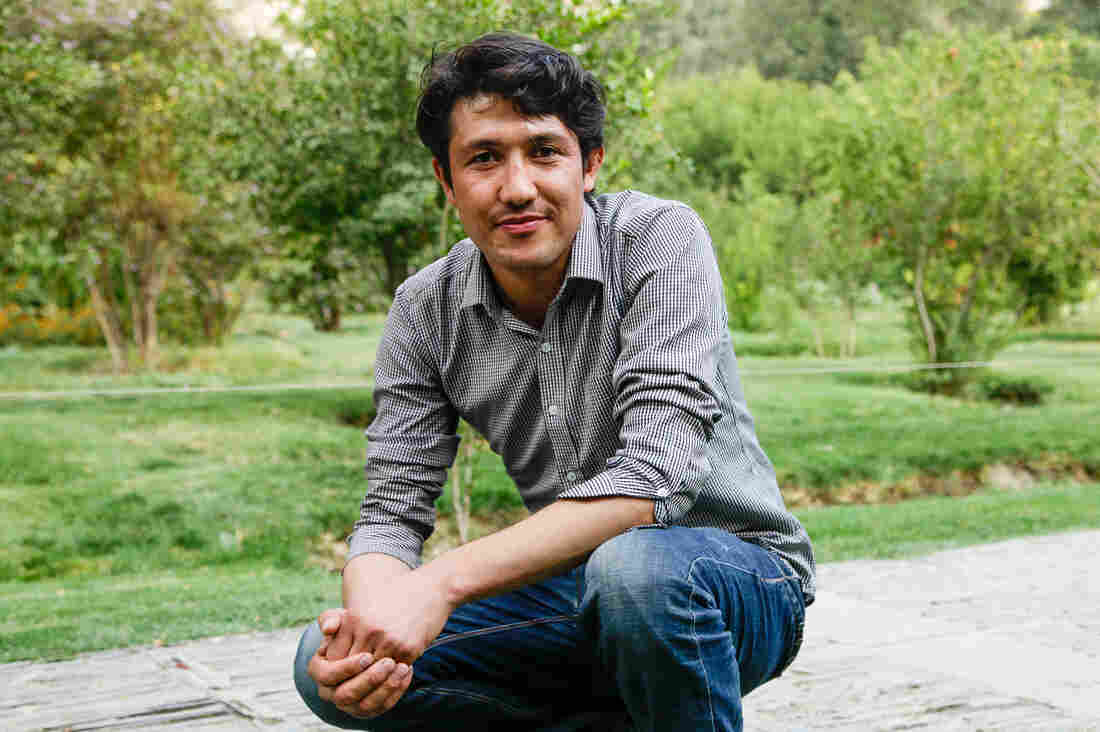 "We have to make sacrifices for peace and for freedom," says Faramarz Mahdavi, 23. Diaa Hadid/NPR hide caption

But Faramarz Mahdavi, 23, worries that war-weary Afghans will support a deal between the U.S. and Taliban, when instead "We have to make sacrifices for peace and for freedom," Mahdavi says.

Other Afghans have already sacrificed and can do no more, says Abdul Hanan, 24. "I am one of the people who supports this peace deal," says Hanan, whose brother, a traffic policeman, was killed in a bombing claimed by the Islamic State in Kabul last year.

"We don't need the Americans to be here. We know how to talk to each other. We are Afghan, they are Afghan," he says, referring to the Taliban, "we can solve this between us."

A U.S. withdrawal is likely to weaken Afghan national forces, who rely on American air cover in particular. That could tempt Taliban insurgents to push harder against their government foes and tip the country deeper into war. 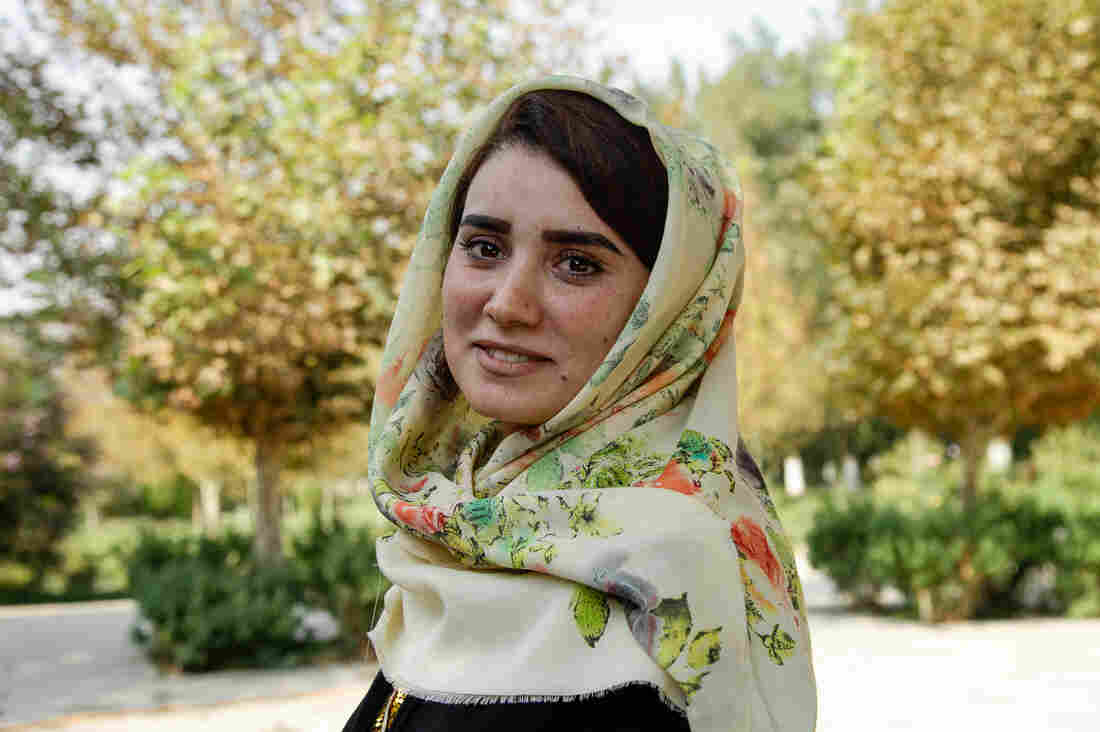 Sosan Popalzai's husband, an army dentist, was killed with four of his colleagues after their military vehicle struck a roadside bomb over a year ago. Diaa Hadid/NPR hide caption

Some Afghans say they have to try to make peace with the Taliban, despite the risks. Sosan Popalzai walks in the park, flanked by her female relatives like protective hens. The 24-year-old has come to the park with her cousins to rest. Her husband, an army dentist, was killed with four of his colleagues after their military vehicle struck a roadside bomb outside Herat over a year ago. Their son was barely a month old.

Since then, she says she couldn't sleep, couldn't eat. "I would get so angry at my son when he'd cry that sometimes I wanted to hit him — sometimes I did hit him," she says quietly.

Popalzai says she worries about the fate of her son, considered an orphan in Afghanistan because he does not have a father. She says the war has degraded Afghan values and children like her son are treated harshly.

"They end up on the streets. They polish boots. They beg. They sell shopping bags," she says. "Every stranger kicks them."

"I want this peace to be signed," she says of a potential deal between the U.S. and the Taliban. "We are so tired of women being widowed, children losing their parents. This peace would have brought everything to our children."