Accessibility links
Wisconsin Woman And Her Sons Charged With Running Illegal Vaping Operation Police say the trio ran one of the country's largest illegal manufacturing vaping businesses. Officials continue to investigate what's behind the deaths and illnesses linked to vaping. 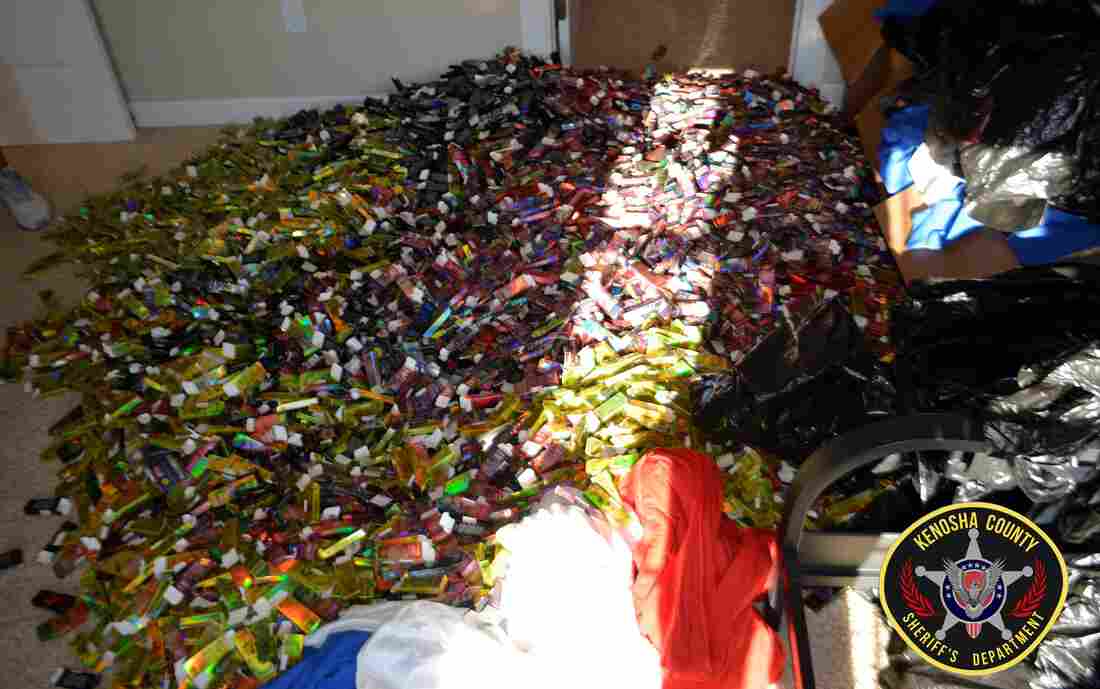 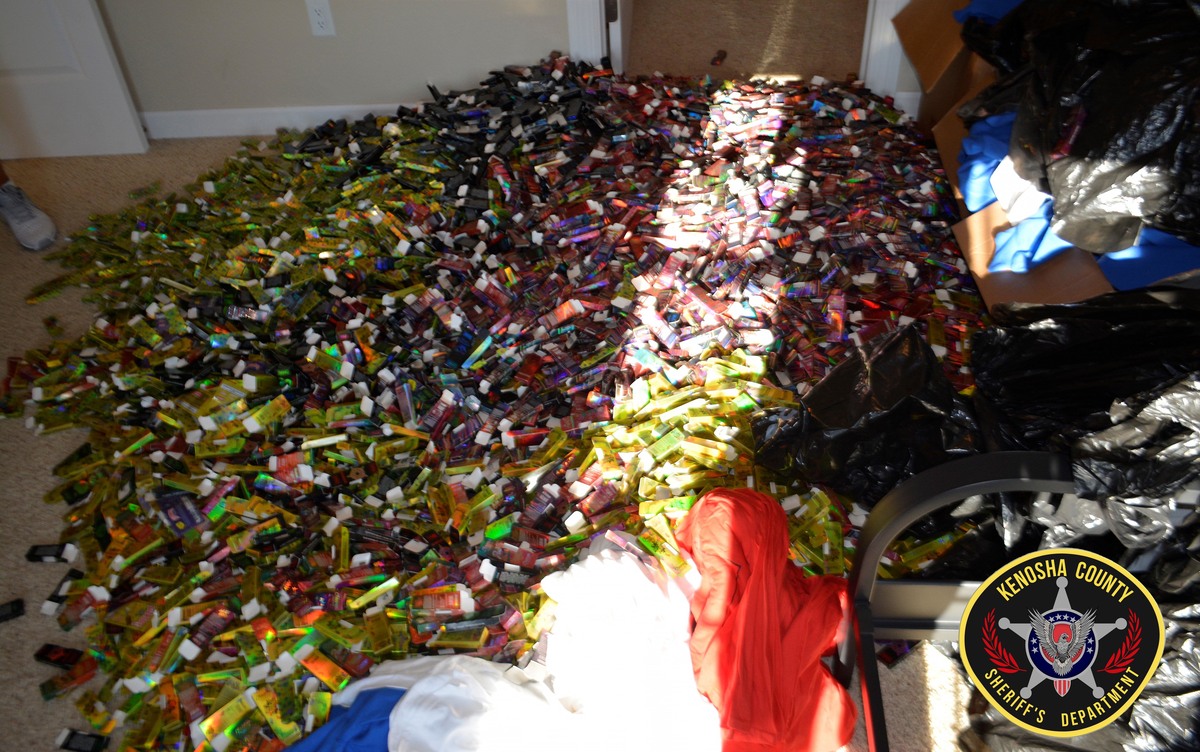 Public health officials say the number of people who have died or have gotten ill after using e-cigarettes or other vaping products is rising, and they're still trying to figure out why. It's led to plenty of warnings about e-cigarettes and put a spotlight on illegal vaping operations.

Bristol, Wis., is just north of the Wisconsin-Illinois state line. In early September, law enforcement officials conducted a raid at a condo unit located in a winding subdivision of new homes and houses still under construction.

"They were able to uncover 31,000 filled cartridges with THC oil," says Kenosha County Sheriff David Beth, who lined up some of the items from the drug bust on a table.

In a state where marijuana is still illegal, Beth says they found Mason jars full of THC oil plus thousands of empty cartridges and small colorful boxes that look like they were made for candy with names such as Linwood Lemonade Clear and Razzle Dazzle Clear.

Police arrested 20-year-old Tyler Huffhines and his 23-year-old brother Jacob Huffhines last month. They charged them with running what police say is one of the country's largest illegal manufacturing vaping businesses. Their mother, 43-year-old Courtney Huffhines, also was arrested and charged with six felony counts including maintaining a drug trafficking place. She is scheduled to appear in court for a preliminary hearing on Friday. 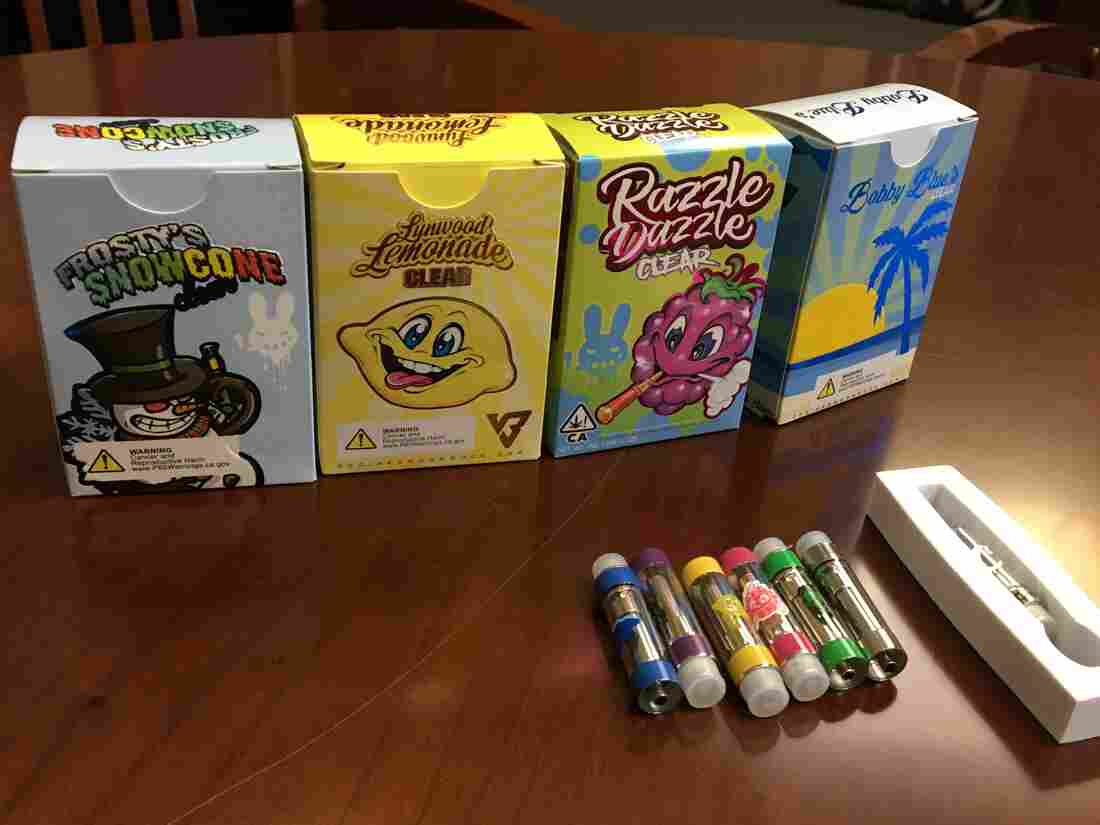 Some of the items confiscated in the drug bust. Cheryl Corley/NPR hide caption 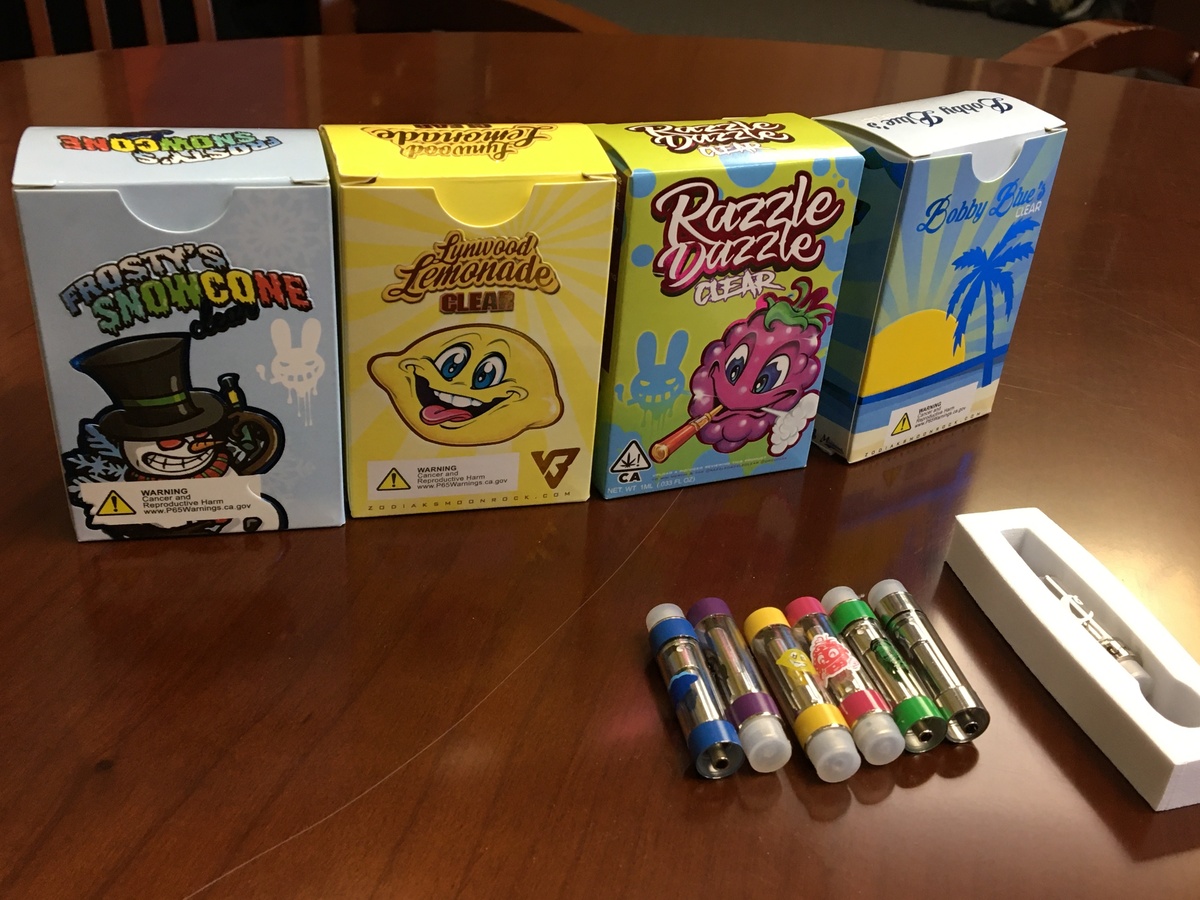 Some of the items confiscated in the drug bust.

That's the illegal end of it, but legal e-cigarette use has been on the rise all around the country. People inhale the aerosol created when the e-cigarette devices heat up liquid infused with nicotine or other substances. In some states, it's also legal to vape using cartridges filled with THC — the "get high" ingredient of marijuana. Authorities suspect the culprit behind the rash of illnesses could be caused by illegal street-level THC vaping products, such as contaminated cannabis oil.

Dr. Anne Schuchat, with the Centers for Disease Control and Prevention, says there are now more than 1,000 vaping-related lung injury cases.

"This condition is serious and we continue to learn of additional deaths," Schuchat says. "There have been 18 deaths confirmed and reported to CDC from 15 states, and we know that additional deaths are under investigation." 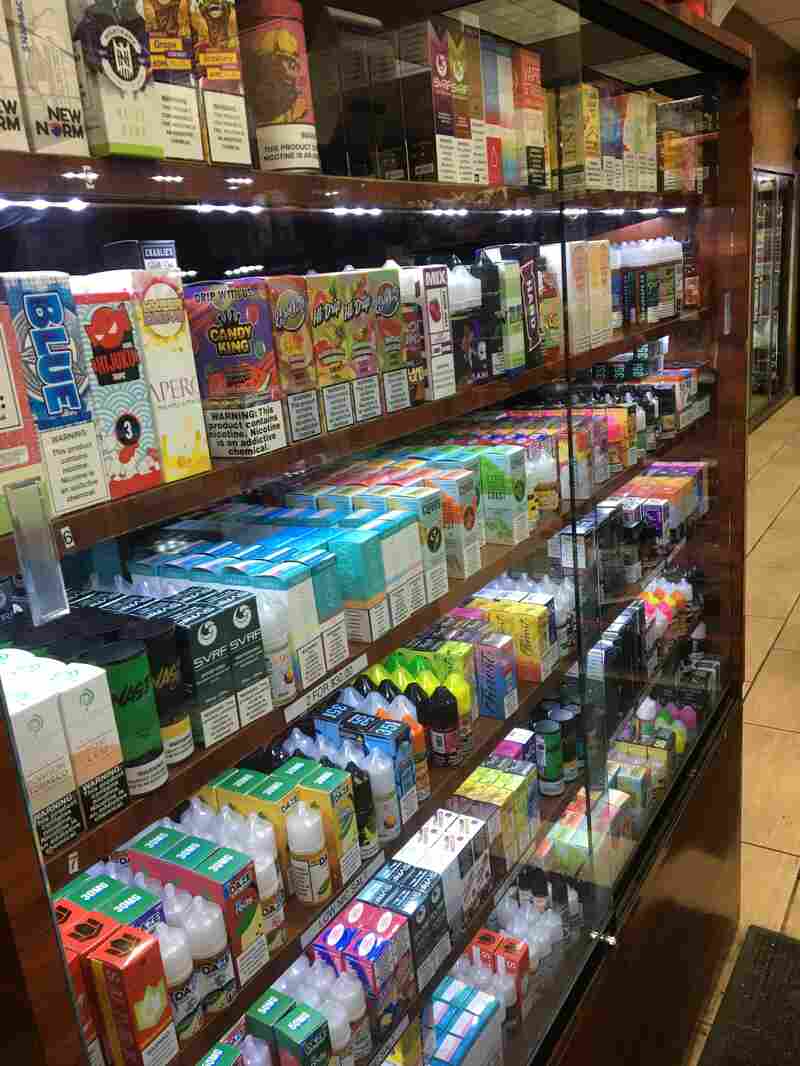 The manager at Bono Gas and Vape Shop in Kenosha, Wis., has been closely following the news about people getting sick from vaping. Cheryl Corley/NPR hide caption 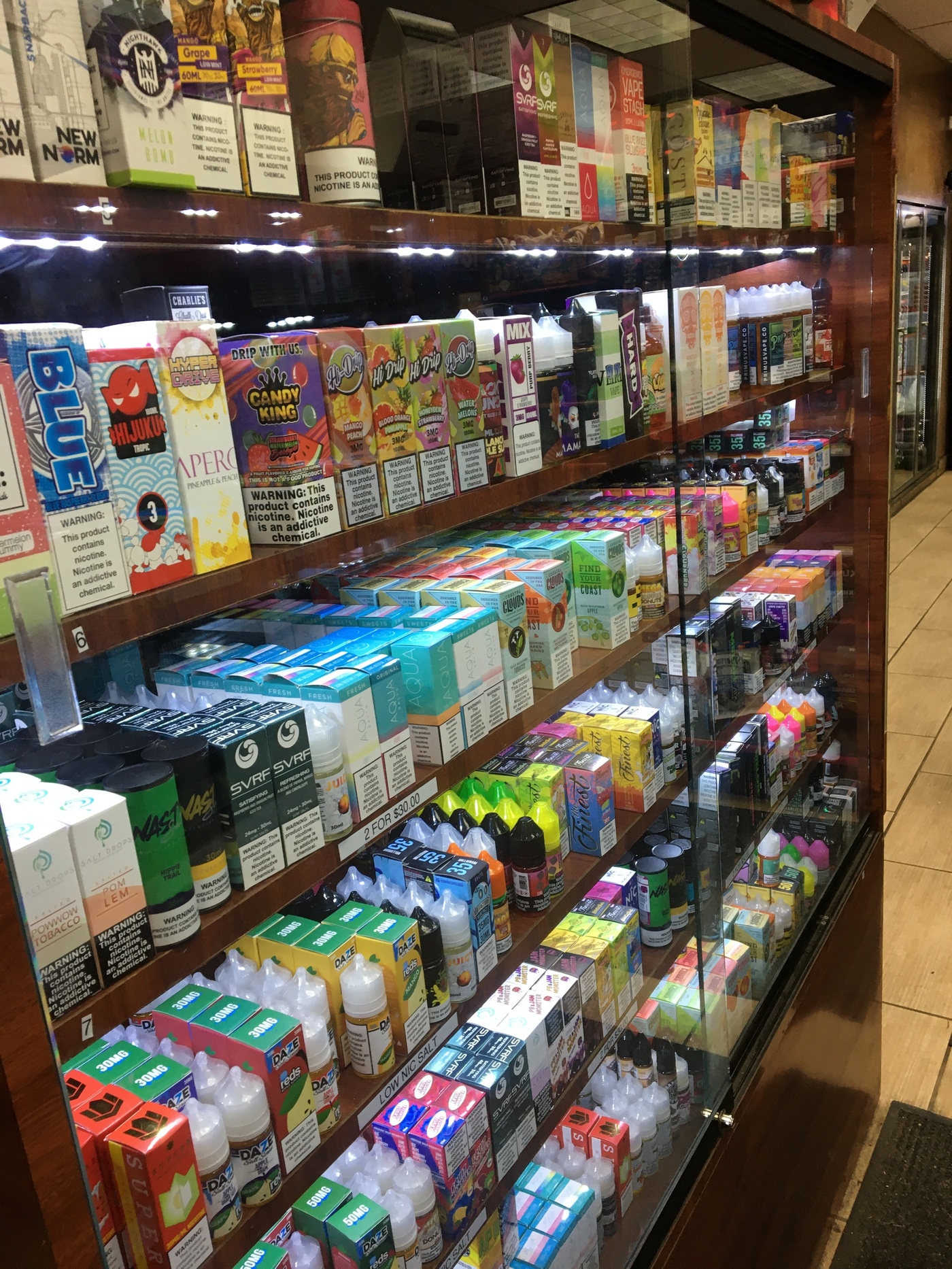 The manager at Bono Gas and Vape Shop in Kenosha, Wis., has been closely following the news about people getting sick from vaping.

There haven't been any deaths in Wisconsin, but there have been 69 cases of vaping-related lung conditions. John Meiman, the chief medical officer at the Wisconsin Health Department, says young adults and teenagers make up most of the state's cases. "The main takeaway is a large number of patients in Wisconsin report using THC vaping products, particularly pre-filled cartridges," Meiman says.

Now the CDC and the Food and Drug Administration are doubling down on warnings on even using legal e-cigarette products. That frustrates advocates of nicotine-based vaping, who argue the products are safer than regular cigarettes for smokers. However, the CDC suggests smokers use other methods to try to curb their habit. The FDA also says people affected with lung illnesses have reported using products with both THC and nicotine.

At the Bono Gas and Vape Shop in Kenosha, display cases in the front of the store are packed full of vaping supplies. The manager, 25-year-old Hamza Abujad, says he's been keeping an eye on all the news because it could affect his bottom line.

"And I own a distribution business, too, for vaping," he says. "You have to keep up with it because anything could happen. They could ban it, you know."

Abujad says, so far, neither the controversy over vaping nor the news about the Wisconsin arrests has affected business.

"Not really," he says. "People that don't vape just hate it more, but people that are actually vaping, they research it even more, they go deeper into it."

Federal and state health agencies are continuing the effort to solve the mystery behind the vaping-related illnesses. The CDC says so far there's no sign the outbreak has reached its peak.