Accessibility links
Granddaughter Of Westboro Baptist Church Founder Chronicles Leaving In 'Unfollow' Megan Phelps-Roper, who first picketed against homosexuality with her family at age 5, writes of facing feelings of guilt. In her memoir she says of her family, "losing them was the price of honesty." 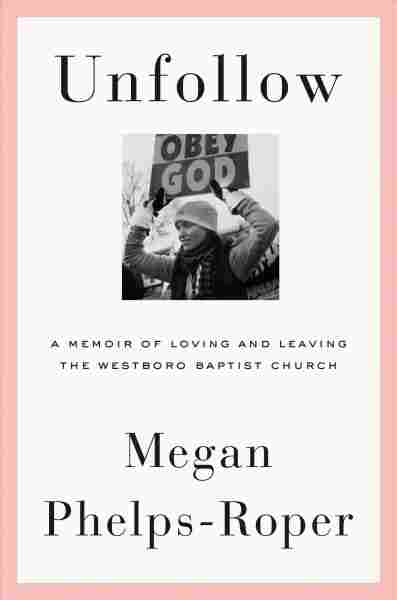 A Memoir of Loving and Leaving the Westboro Baptist Church

Many people in Topeka, Kan., first became aware of the Westboro Baptist Church in the early 1990s, when members began what would become their trademark public action: picketing to protest what they saw as the ills of an ungodly world.

Megan Phelps-Roper was 5 years old when it began; as a little girl, she stood with her parents and other family members — for that's what the church was at the time, one extended family — holding picket signs warning of gay people in the city's Gage Park.

The early signs were relatively benign in their wording. "I was surprised by how small and restrained some were compared to what came later," Phelps-Roper writes in her new memoir, Unfollow. Later, of course, Westboro made itself known far beyond one small Midwestern city, with members — including tiny children — brandishing signs saying things like "Thank God for Dead Soldiers" at the funerals of service members, "God Sent the Shooter" at Sandy Hook Elementary School, and the infamous "God Hates Fags," a message so central to its mission that it became the address of the church's website.

In Unfollow: A Memoir of Loving and Leaving the Westboro Baptist Church, Phelps-Roper tells her story of growing up in Westboro a beloved and valued granddaughter of the church's founder, and the torturous choice she made in her late 20s to leave it behind. A devoted follower turned apostate, Phelps-Roper remains estranged from most of her family, though several of her siblings and a few cousins have also left the church. Her grief is palpable: "Losing them was the price of honesty," she writes. "A shredded heart for a quiet conscience."

Indeed, Phelps-Roper describes a childhood that while steeped in religious extremism was also warm and loving. The grandchildren of Fred Phelps grew up together in a family compound of houses arranged around a backyard swimming pool. They attended public schools and were allowed to check out the books they wanted at the public library. There were "pool parties and trampoline jumping and tennis playing in the summer," she writes, and "football and snowball fights and sledding down the little hill behind our garage in the winter."

The eldest daughter in a family of 11 siblings, Phelps-Roper became her mother's "right hand," helping with the legal and logistical work required to carry off the picketing missions. Immersed in her grandfather's preaching, she believed that "Westboro was the only safe haven from the wrath of God, both in this life and in the world to come." But slowly, as she matured, graduating from college and law school, she began to wonder whether her family was right in its theology, its worldview of enemies and sin, obedience and hatred. After a series of internal church squabbles, she writes, "I was beginning to see that our first loyalty was not to the truth but to the church. That for us, the church was the truth, and disloyalty was the only sin, unforgivable."

I wish Phelps-Roper were able to tell us more about how her grandfather came to his bizarre theology, especially given that his early career as a lawyer was that of a white man from the South who represented primarily African American clients in Topeka. Somehow, his fervor for civil rights morphed into a warped ideology of hatred, one in which every disaster was evidence that God hates a morally bankrupt society. She quotes Scripture consistently throughout the book, especially the verses that illuminate why Westboro members felt empowered by the animus they inspired (a BBC documentary called them "The Most Hated Family in America"). But what will be difficult for most readers, I suspect, is understanding, as Phelps-Roper writes, how "people who were otherwise bright and well-intentioned could believe and behave as we did as members of Westboro."

The story of how Phelps-Roper extricated herself (and one of her sisters) from Westboro unfolds like a suspense novel, so I won't spoil it here. Suffice to say, leaving was wrenching, despite its clear necessity. And life after Westboro was disorienting — liberated but also adrift, Phelps-Roper had to face the guilt over "years I had wasted hurting people in a misguided effort to serve an image of a God that seemed less real all the time." Still, past the pain is healing. Meeting and talking with some of her former antagonists (most of whom she had met on the picket line, or in her role running the church's Twitter presence) helped Phelps-Roper confront the contradictions in what she had been taught. She writes:

"We could cease presuming most people were evil and ill-intentioned. The hope that sprang from this realization would become the new foundation of my life, but along with that hope came still more confusion: If there was more than one possible answer, how did anyone manage to decide between them?"

Another realization: "Westboro is not unique." Other groups, religious and otherwise, convince their members that they alone hold purchase on the true way. One thing all those groups have in common is a fear of the other, Phelps-Roper notes. It's for them, including perhaps her own parents, that she writes, at the book's end, "I want to tell them that the world isn't evil. That it's full and complicated and beautiful and good, filled with unknown truths and unbroken hopes, and that it's waiting just for them."

Kate Tuttle is a writer and critic based in New Jersey.