Accessibility links
Nobel Prizes In Literature Go To Olga Tokarczuk And Peter Handke The Swedish Academy made the unusual move Thursday of recognizing both Handke, an Austrian writer, and Tokarczuk, who is Polish, after scandal prevented the committee from awarding a prize last year. 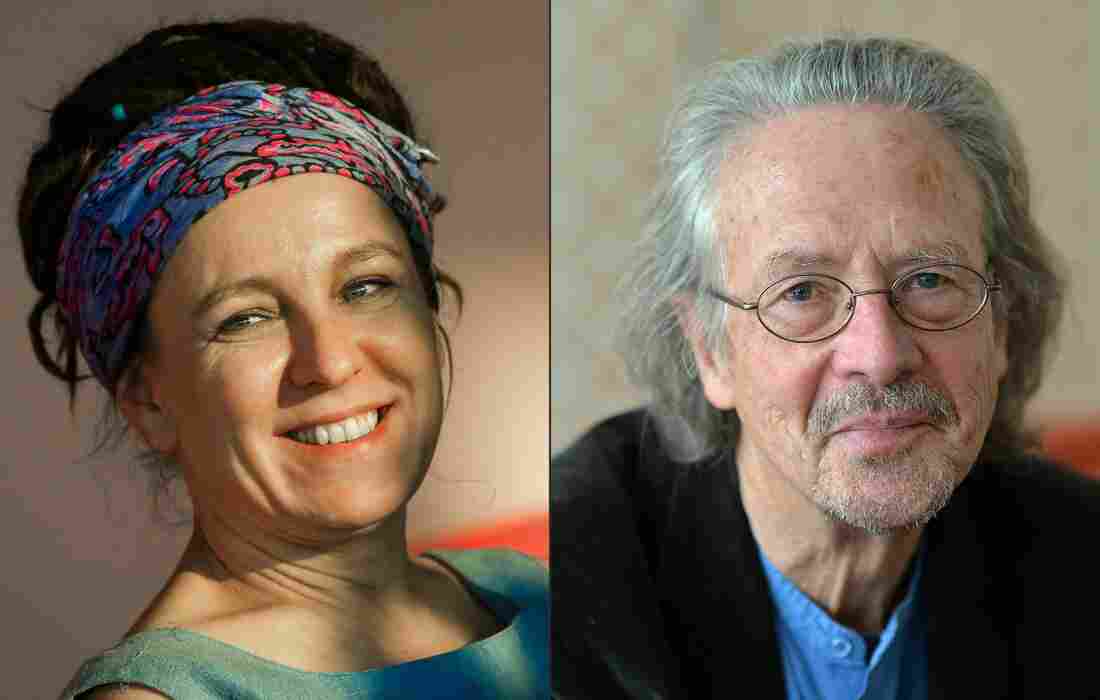 Polish author Olga Tokarczuk (left) won the postponed 2018 Nobel Prize for literature and Austrian novelist and playwright Peter Handke won the 2019 award. The Swedish Academy did not hand out a prize last year due to scandal. Beata Zawrel and Barbara Gindl/APA/AFP via Getty Images hide caption 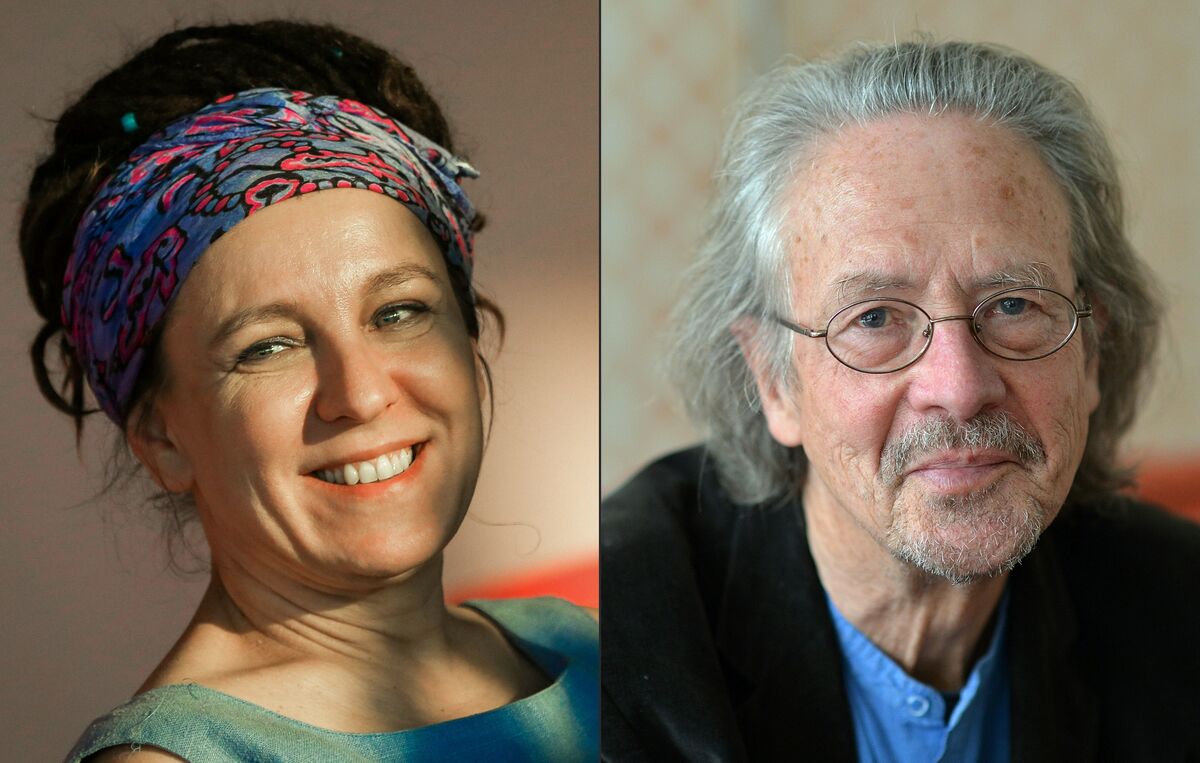 Polish author Olga Tokarczuk (left) won the postponed 2018 Nobel Prize for literature and Austrian novelist and playwright Peter Handke won the 2019 award. The Swedish Academy did not hand out a prize last year due to scandal.

In an unusual move, the Swedish Academy doled out Nobel Prizes in literature to two authors on Thursday: Polish writer Olga Tokarczuk, who won the postponed 2018 award, and Austrian author Peter Handke, who won the prize for this year. The academy's permanent secretary, Mats Malm, announced the winners at a press briefing in Stockholm.

Tokarczuk, 57, was recognized "for a narrative imagination that with encyclopedic passion represents the crossing of boundaries as a form of life," according to the judges' citation, released Thursday.

And judges said Handke, 76, won "for an influential work that with linguistic ingenuity has explored the periphery and the specificity of human experience."

(More on why this year had two prizes in a second.)

For Tokarczuk, who has published more than a dozen works since her debut in 1993, the prize marks the latest — and greatest — in a string of recent honors.

Last year the Polish novelist became the first writer from her country to win the International Booker Prize, for her book Flights; and the novel Drive Your Plow Over the Bones of the Dead, recently published in an English translation, made the list of finalists for this year's International Booker, as well.

"She's a writer preoccupied with local life, but at the same time inspired by maps and speculative thought, looking at life on Earth from above. Her work centers on migration and cultural transitions," Swedish Academy member Anders Olsson explained Thursday, adding also that it is "full of wit and cunning."

Or, as Kamil Ahsan put it in a review of Drive Your Plow earlier this year: "Tokarczuk is fundamentally a portraitist, a writer with a keen sense for sniffing out the incongruities that make a person."

The #NobelPrize in Literature for 2019 is awarded to the Austrian author Peter Handke “for an influential work that with linguistic ingenuity has explored the periphery and the specificity of human experience.” pic.twitter.com/rZa1NEFMuO

Meanwhile, Handke, an Austrian-born writer who now lives in France, is best known for his radical experiments with form — experiments like the 1960s drama Offending the Audience, in which the actors onstage spend an hour critiquing the "performance" of the spectators. He also wrote short stories, radio dramas and fiction works, perhaps the most notable of which is The Goalie's Anxiety at the Penalty Kick.

More recently, Handke aroused controversy for his opinions in support of the late Yugoslav president and strongman Slobodan Milosevic, who had been charged with crimes against humanity before his death in jail awaiting trial. Handke also took part in his funeral in 2006, later calling Milosevic "a rather tragic man. Not a hero, but a tragic human being."

In the uproar that followed his attendance at the funeral, German politicians sought to revoke his prestigious Heinrich Heine Prize, won that year, but Handke ended up turning it down anyway — "to spare my work, which I do not want to become an endless target for the vulgar insults of party politicians."

"He has for some decades been one of the most influential writers of contemporary fiction, part of the literary debate already in 1966," Olsson noted at the news conference in Stockholm, adding: "With great artistry he explores the periphery and unseen places."

Now, casual followers may be wondering why this year — for the first time in nearly half a century — two writers were honored as Nobel laureates, rather than just one. The reason has little to do with the writers themselves and everything to do with the organization awarding them their prizes.

The Swedish Academy, the 18-seat committee that selects the Nobel laureates in literature, decided not to hand out a prize last year after a widely publicized sexual assault scandal led to mass resignations and doubts about the academy's legitimacy.

After more than a dozen misconduct allegations surfaced against Jean-Claude Arnault, a Stockholm impresario who was closely linked with the committee and who was eventually convicted of rape, several prominent members sought to resign in protest last year.

Arnault — the husband of then-member Katarina Frostenson — was also found to have leaked the names of winners in advance, leading to big wagers in the robust betting markets that surround the notoriously tight-lipped literary prize.

Those resignations caused significant institutional issues, given that memberships in the body are for life. The 233-year-old institution, which had no ready regulations to replace members who step down, found itself diminished in number and incapable of naming a 2018 laureate with the authority it wished.

"The Academy needs time to regain its full complement, engage a larger number of active members and regain confidence in its work, before the next Literature Prize winner is declared," the group announced in spring of last year.

It was the first year since World War II that the literary prize was not awarded.

Only in March, after amending regulations to allow its members' resignation and replacement, did the Swedish Academy announce that the prize was back on this year — and that it would be anointing two writers with the honor for the first time since Eyvind Johnson and Harry Martinson split the award in 1974. This time though, unlike 1974, the committee is actually awarding two separate prizes — for 2018 as well as 2019 — rather than dividing one equally between the writers.

This year's winners join Kazuo Ishiguro (2017), Bob Dylan (2016), Svetlana Alexievich (2015) and Patrick Modiano (2014) as the most recent laureates to win the prize. Altogether, 114 individuals have won the Nobel in literature since its institution in 1901.

Along with their medal, the winners will each receive 9 million kronor (about $918,000) at a ceremony expected to be held on Dec. 10 in Stockholm.