Accessibility links
Recovery Is Slow In The Florida Panhandle A Year After Hurricane Michael A year later, the populations of Panama City and Mexico Beach are lower, property tax rates are higher and many of the buildings that remain are just shells, lacking roofs, windows and walls. 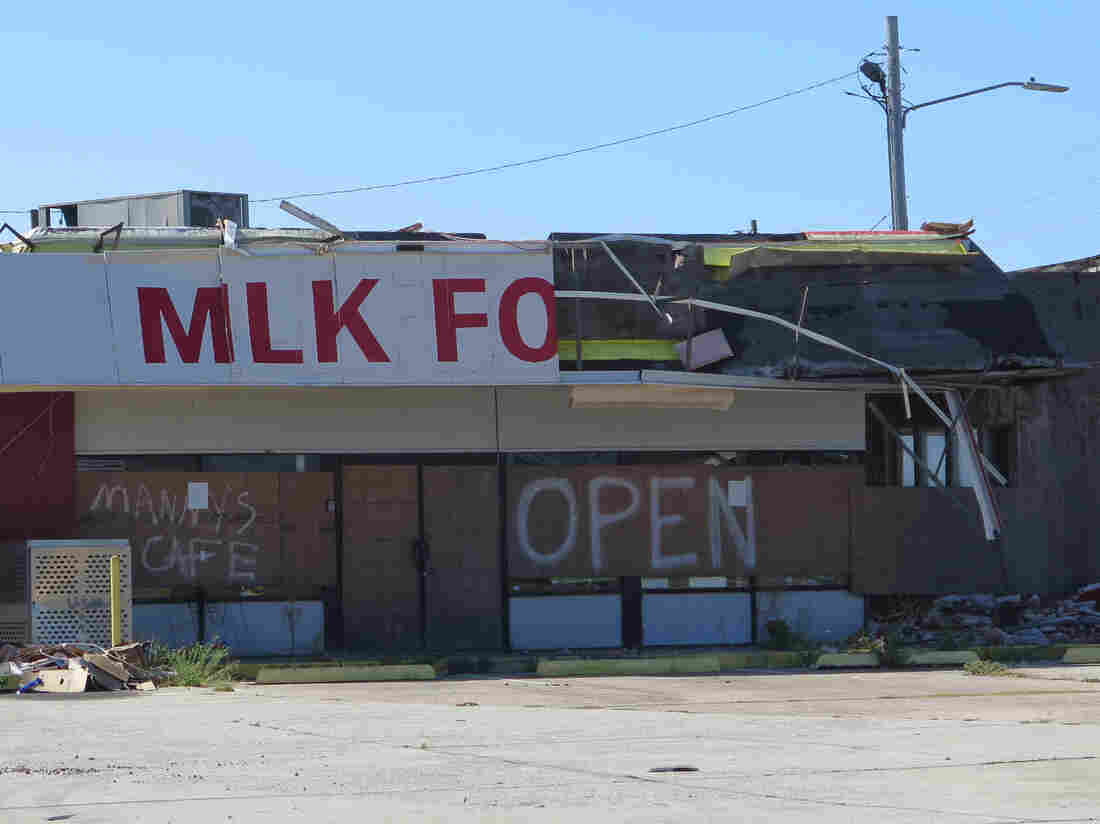 Businesses have been slow to reopen since Hurricane Michael, in part because there aren't enough workers. Greg Allen/NPR hide caption 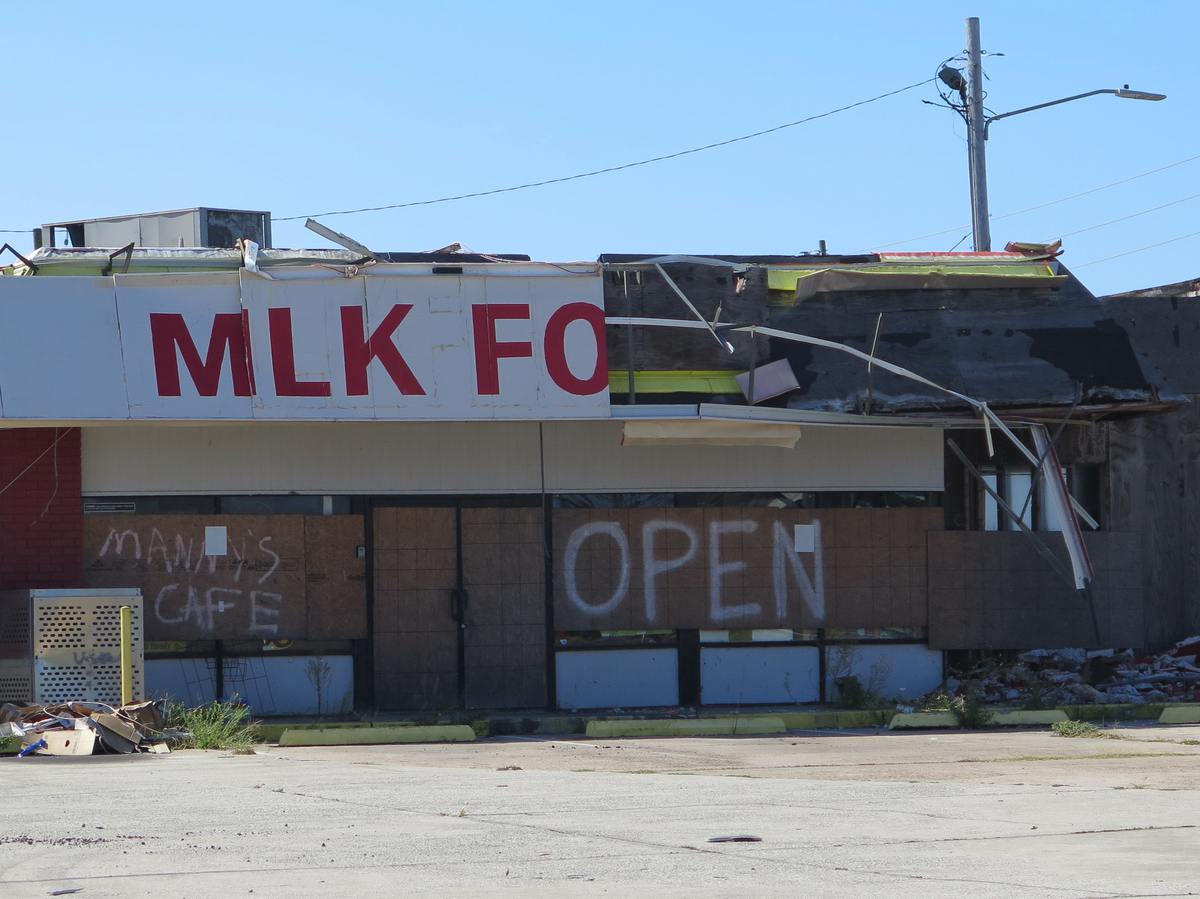 Businesses have been slow to reopen since Hurricane Michael, in part because there aren't enough workers.

A year after Hurricane Michael slammed Florida's panhandle, communities there are struggling, and rebuilding is slow. With housing devastated, local governments are being forced to raise property tax rates to pay for high recovery costs, and a severe housing shortage has caused many, to temporarily leave the area.

A high school marching band greeted shoppers and paraded through the store when a Winn-Dixie supermarket reopened recently. Businesses have been slow to reopen since Hurricane Michael, in part because there aren't enough workers.

Philip Griffitts, chairman of the Bay County Commission, says it all stems from a shortage of affordable housing.

"Rents that are available are very high," he says. He cites a newspaper article he saw about a Dairy Queen planning its reopening. "They're having to push it back," he says, "simply because they can't find the help to open a new Dairy Queen."

In Panama City and surrounding communities, crews are busy replacing roofs and working on new construction. But the demand for contractors plus the electricians, plumbers and other building trades far outstrips what's available. Griffitts says friends who are contractors have more work than they can handle. One friend he says is a small time custom builder who might do five to seven projects a year.

'Everyone Would Have Left': Putting Lessons From Hurricane Michael To Work

When Michael roared through Panama City with winds over 150 miles per hour last October, it ravaged public housing and aging apartment complexes that made up much of the area's affordable housing stock. Thousands were left homeless. Many left the area. Some moved into trailers and manufactured homes provided by FEMA. On the Bay County fairgrounds, Tasha Crawford is pregnant and has been living in a FEMA mobile home since March with her boyfriend and five children.

"We have the three bedroom, two baths, but it's really little, because it's just a single wide," Crawford says. "I'm very thankful for it though."

Crawford says they can stay here until April, and maybe longer if FEMA allows it. She and her boyfriend have been looking at rental properties, but they're expensive: a three bedroom would cost them nearly $2,000 a month.

"Plus you're going to have your water and your lights that you got to pay on top of it," she says. "It's stressful right now."

Mark McQueen, the city manager in Panama City, agrees that affordable housing is the area's most acute need, but says there are signs of progress. Work is underway on several privately owned apartment complexes that were damaged and shut down after the storm.

"In fact, between now and February of ... 2020, we're going to see about 85% of that housing stock back in inventory again," McQueen says.

Rebuilding is also slow in the community closest to where Hurricane Michael made landfall, Mexico Beach. The storm killed three people there and left more than three-quarters of the homes destroyed or severely damaged.

A year later, many of the buildings that remain are just shells, lacking roofs, windows and walls. The rubble is mostly gone leaving empty lots behind. In some cases, entire blocks are empty. But here and there, homes are being rebuilt.

"We've got over 30 new building permits that have been issued," says Al Cathey, the mayor of Mexico Beach and owner of the local hardware stores. "Things starting to come out of the ground. New homes, new roofs."

At Cathey's hardware store, which is still operating temporarily out of a lumber warehouse, one customer is having new keys made. Others are picking up lumber, drywall and nails.

Cathey grew up in Mexico Beach. It's always been small, with just 1,200 residents before the storm. Homes were passed down from one generation to the next he says. But since Michael, he sees signs that's changing.

"Some of the younger generation may not have the attachment to Mexico Beach that their parents and or grandparents had," Cathey says. "We've had about 160 property sales since Michael."

Many of sales are of empty lots, some of them beachfront. But Cathey says land prices are back where they were before the storm and for every property on the market, there are typically two or three buyers.

"We're very pleased," he says. "For myself, I'm going to lose some good customers, some old-time friends. But we'll make new ones." 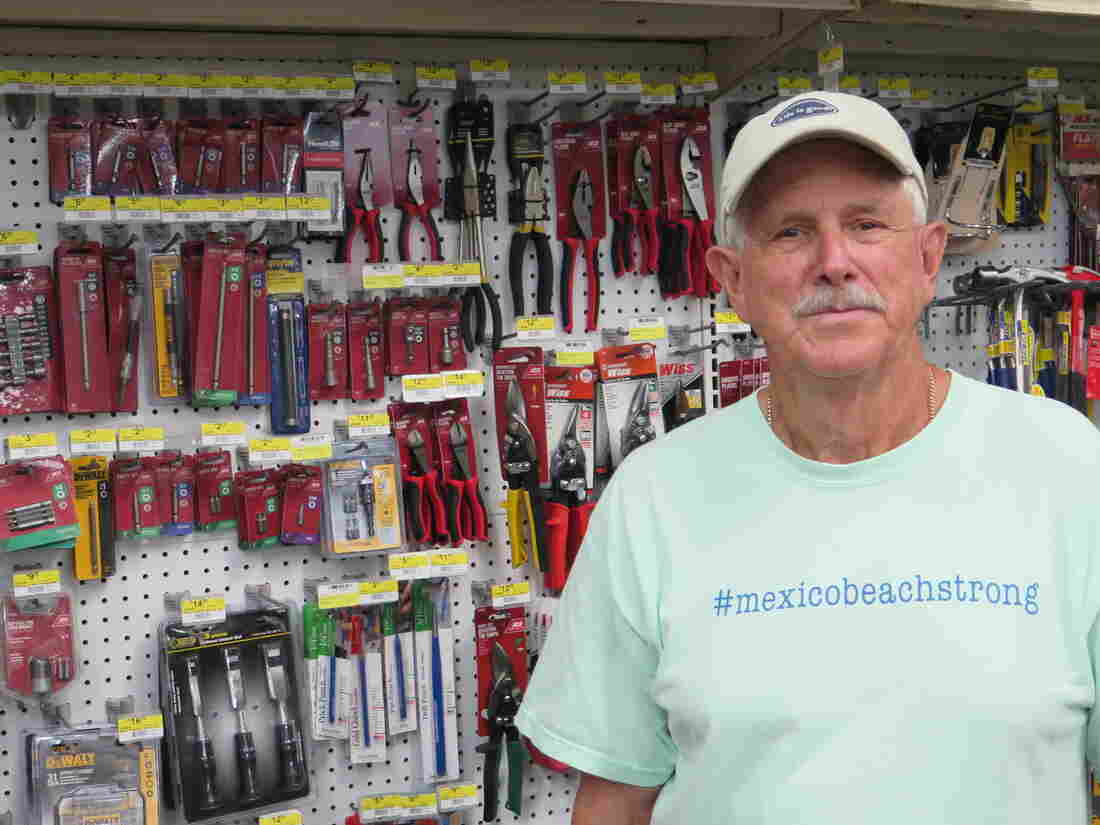 Al Cathey is mayor of Mexico Beach and the owner of the hardware store, one of the few businesses open in town. Greg Allen/NPR hide caption 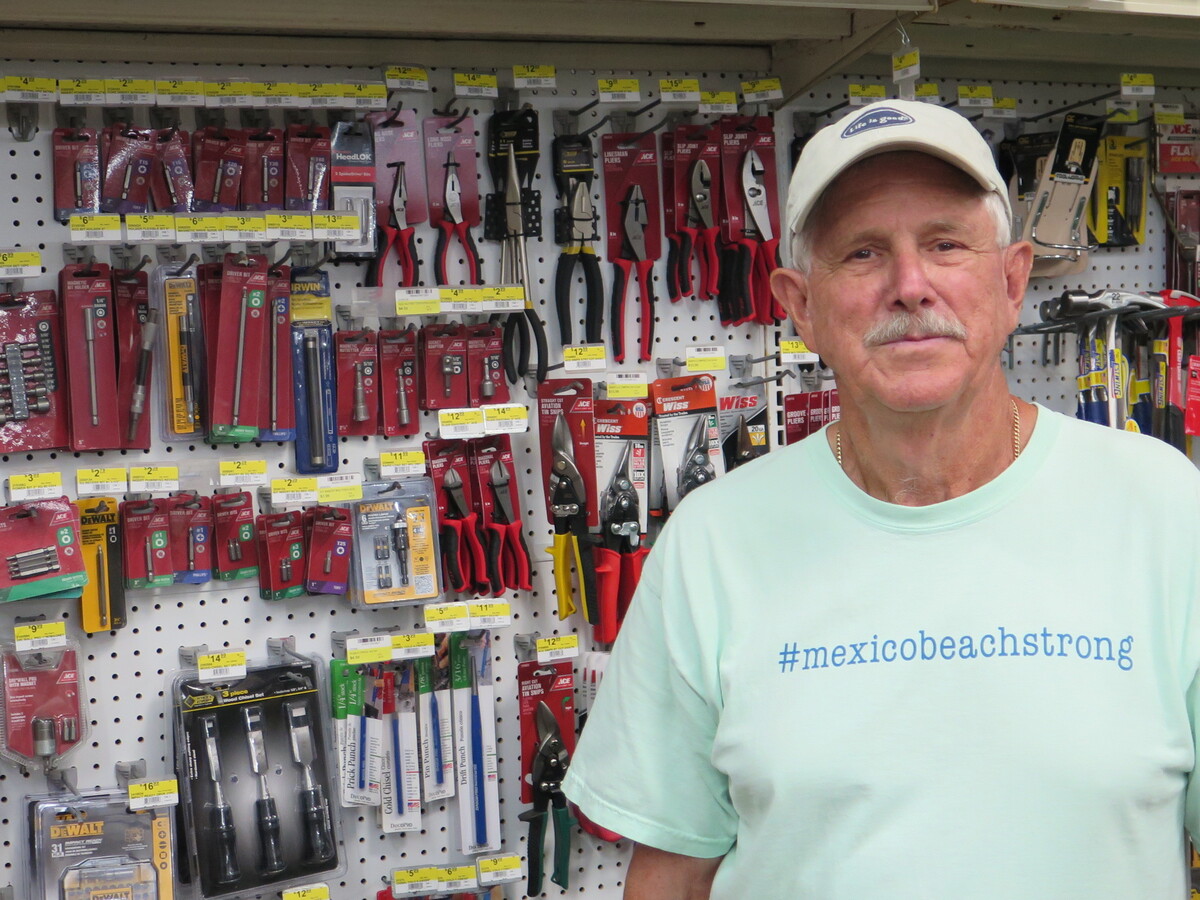 Al Cathey is mayor of Mexico Beach and the owner of the hardware store, one of the few businesses open in town.

One concern is maintaining the small-town character as Mexico Beach rebuilds. Cathey says the town has rejected proposals from developers who want to rezone properties for multi-story condos and apartments.

Across this part of Florida's panhandle, housing remains the major challenge. But in Panama City, Hurricane Michael exposed another problem that needs attention: its aging infrastructure. Since August, a series of breaks and pump failures have dumped more than 65,000 gallons of sewage into the city's waterways. Trees uprooted in the storm and convoys of heavy, debris-filled trucks have cracked decades-old sewer pipes. Officials say replacing the system will take ten years and cost at least $200 million.

And at this point, officials in Panama City and other communities hit by the storm are struggling just to balance their budgets. In Panama City, Hurricane Michael destroyed or damaged 85% of the structures, substantially reducing their value on the tax rolls.

To compensate for the decline in values, Panama City raised the property tax rate. It was an unpopular move, but it was one of several local communities to do so. McQueen says the tax rate should come down over the next few years as homes are rebuilt and property values rebound.

He's more concerned about another consequence of the storm, the area's population loss. Officials estimate that 8,000 or 9,000 people — more than 25% of the city's residents — left the area. McQueen says that will hurt in April when the once-in-a-decade census is conducted.

"The four-hour ... storm called Hurricane Michael could have a 10-year punitive effect to the recovery of the city of Panama City," the city manager says.

That's because the census is used to determine levels of state and federal grants, funding that will be vital as Panama City and other panhandle communities rebuild.