Accessibility links
Civilians Flee As Turkish Forces Strike Kurds In Northern Syria The attack that began Wednesday has uprooted civilians in the area. Meanwhile, Secretary of State Mike Pompeo insists that the Trump administration did not "greenlight" the incursion. 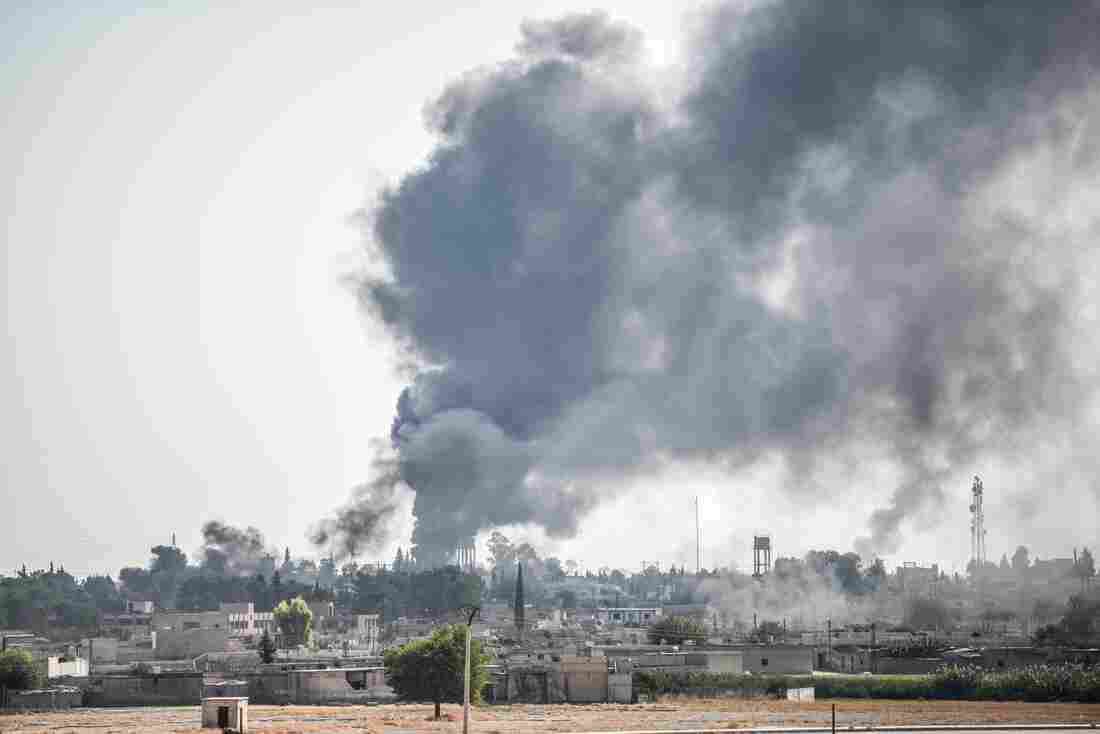 In this photo taken from the Turkish side of the border between Turkey and Syria, smoke billows from a fire inside Syria during bombardment by Turkish forces on Wednesday. Bulent Kilic/AFP via Getty Images hide caption In this photo taken from the Turkish side of the border between Turkey and Syria, smoke billows from a fire inside Syria during bombardment by Turkish forces on Wednesday.

As Turkish soldiers launched an assault on U.S.-backed Kurdish fighters in northern Syria and panicked civilians fled the battle zone, the White House sought to tamp down intense criticism over what many view as Washington's acquiescence in the incursion.

Turkey's forces crossed the border on Wednesday, carrying out airstrikes and artillery barrages against the Syrian Democratic Forces, a Kurdish-led militia that has fought alongside the U.S. in efforts to dismantle the Islamic State in Syria. 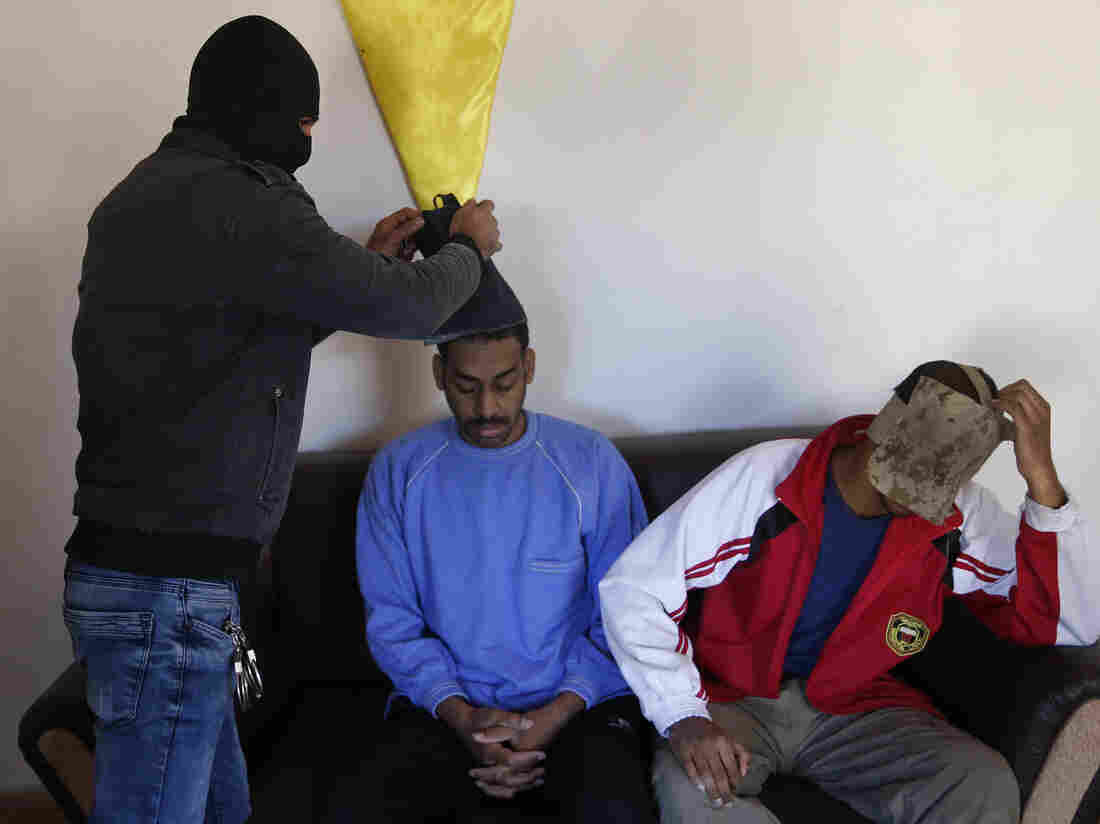 A Kurdish security officer takes face masks off Alexanda Amon Kotey (left) and El Shafee Elsheikh, who were allegedly among four British jihadis who made up a brutal Islamic State cell dubbed "The Beatles," for an interview at a security center in Kobani, Syria, last year. Hussein Malla/AP hide caption 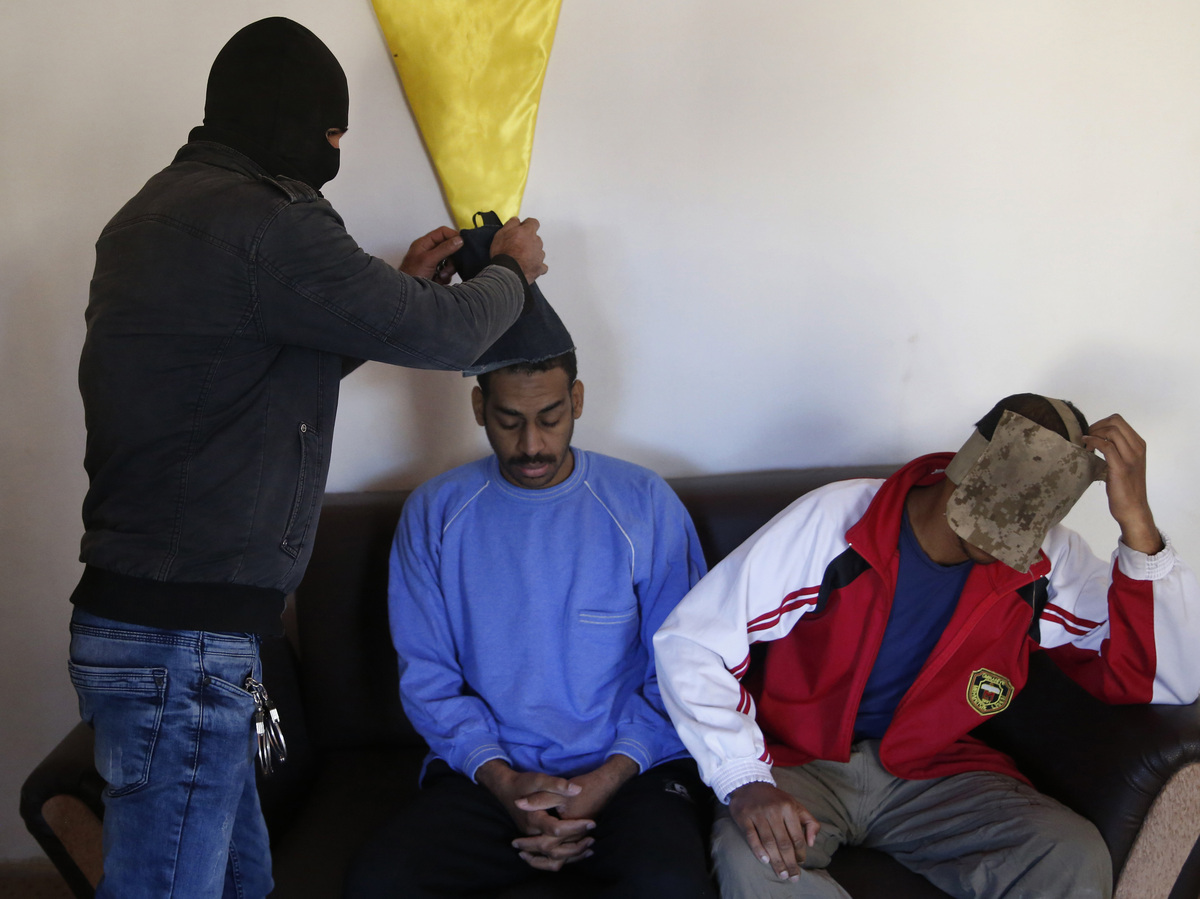 A Kurdish security officer takes face masks off Alexanda Amon Kotey (left) and El Shafee Elsheikh, who were allegedly among four British jihadis who made up a brutal Islamic State cell dubbed "The Beatles," for an interview at a security center in Kobani, Syria, last year.

Turkey accuses the SDF of having links to the Kurdistan Workers' Party, or PKK, a Kurdish separatist group based in Turkey and Iraq responsible for years of violent attacks within Turkey.

Turkish Foreign Minister Mevlut Cavusoglu told CNN Turk on Thursday that his country's forces will penetrate northeastern Syria no farther than 30 kilometers (18.6 miles) beyond the border with Turkey. "When we go 30 kilometers deep in the safe zone, terror there will be removed," Cavusoglu said, according to Reuters.

Turkey's top diplomat also asserted his country's right to use the airspace above the area under attack. "That airspace does not belong to the United States," he said. "It has no right to control that airspace."

Cavusoglu's assertion of Turkey's right to that airspace follows calls by Syrian Kurds to bar flights near Syria's border with Turkey. "We ask for a no-fly zone over our area," said Sinam Mohamed, co-chair of the Syrian Democratic Forces' political arm, the Syrian Democratic Council. Speaking to reporters in Washington Thursday, Mohamed added that "at least we will not have civilian casualties then."

Turkey has been planning to attack the Kurds for a long time. They have been fighting forever. We have no soldiers or Military anywhere near the attack area. I am trying to end the ENDLESS WARS. Talking to both sides. Some want us to send tens of thousands of soldiers to....

Also on Thursday, President Trump tweeted that Turkey had been "planning to attack the Kurds for a long time. They have been fighting forever."

Trump cast himself in the tweet as trying to "end the ENDLESS WARS. Talking to both sides."

He also made clear he has no intention of confronting Turkey militarily over its campaign targeting Syrian Kurds. "I say hit Turkey very hard financially & with sanctions if they don't play by the rules! I am watching closely."

In case the Kurds or Turkey lose control, the United States has already taken the 2 ISIS militants tied to beheadings in Syria, known as the Beetles, out of that country and into a secure location controlled by the U.S. They are the worst of the worst!

U.S. officials said on Wednesday that two British nationals believed to be part of an ISIS group that released gruesome execution videos of themselves beheading hostages — and were known as "The Beatles" because of their British accents — were moved out of a detention center in Syria into U.S. custody at an undisclosed location.

El Shafee Elsheikh and Alexanda Amon Kotey, held by Kurdish fighters, were part of the group believed to have beheaded American journalist James Foley in August 2014.

The news came amid concern that Kurdish fighters who had been carrying out the fight against ISIS would be diverted to defending themselves against Turkish forces, providing an opening for a resurgence of the terrorist group.

Along the Turkey-Syria border, residents reportedly piled their belongings into vehicles or escaped on foot as Turkish forces struck several towns in the region. Plumes of smoke were seen rising near the town of Qamishli, which lies just over the border, late Wednesday, according to The Associated Press.

The Syrian Observatory for Human Rights also reported fighting farther south between Turkish troops and Kurdish militiamen in the northern countryside of Aleppo.

The observatory reported artillery attacks on the key cities of Raqqa and Hasakah.

Sevinaz Evdike, 27, a Syrian Kurd, fled her home in the town of Ras Al Ein along the Turkey-Syria border, escaping to a Syrian village further away from the Turkish border. She spoke to NPR through the messaging service WhatsApp.

"They bombed the school which is just one street away from my house," she told NPR. "This is the moment that people started to freak out and everyone started to go."

Meanwhile, in Washington, Trump condemned the Turkish incursion, calling it a "bad idea" and appeared to downplay the importance of the U.S. alliance with the Kurdish-led SDF.

"The Kurds are fighting for their land," the president said, speaking to reporters in the Roosevelt Room.

Trump appears to have gotten his "Kurds didn't help us at Normandy" line from a Kurt Schlichter column. https://t.co/jAbsP9VCQt pic.twitter.com/6HknvoZ0gl

It wasn't clear what article Trump was referring to, but some suggested it was an opinion piece published Tuesday in the conservative Townhall.

In a major policy shift announced after a Sunday telephone call between Trump and Turkish President Recep Tayyip Erdogan, the White House said U.S. forces in the area of Turkey's planned operation would stand aside.

That decision has drawn concern and criticism at home and abroad, from U.S. allies and from within the ranks of the president's own party.

In a statement, British Foreign Secretary Dominic Raab expressed concern about Turkey's invasion "destabilizing the region, exacerbating humanitarian suffering, and undermining the progress made against" the Islamic State.

Speaking Monday on Fox News' Fox and Friends, South Carolina Republican Sen. Lindsey Graham called it an "impulsive decision" to remove U.S. troops from the area and allow Turkey a free hand against the Kurds, saying it was "shortsighted and irresponsible." In another appearance on Fox on Wednesday, Graham warned that abandoning the Kurds would be the biggest mistake of the Trump presidency.

Secretary of State Mike Pompeo has insisted that the U.S. did not give a green light to Turkey to launch its northern Syria offensive.

Speaking with PBS NewsHour, Pompeo said he is "confident that President Trump understands the threat" and touted the record of the White House on defeating ISIS in Syria.

"Remember where we were when this administration came into office and just judge us by our results," he said. "We have achieved a good outcome there."

Evdike, the Kurdish woman fleeing the fighting, told NPR she doesn't "feel betrayed by Trump." But that does not mean she is happy with the situation, either.

"I don't want to say bad words, but a person who is tweeting thousands of kilometers away from me deciding about my people — for me, is unacceptable," she said.