Accessibility links
After Trump Call, Ukraine's Zelenskiy Gambles On Russia Peace Push Without U.S. Help Ukrainian President Volodymyr Zelenskiy is trying to fulfill a campaign pledge to end a five-year conflict in eastern Ukraine. A Russian-backed insurgency has cost more than 13,000 lives since 2014. 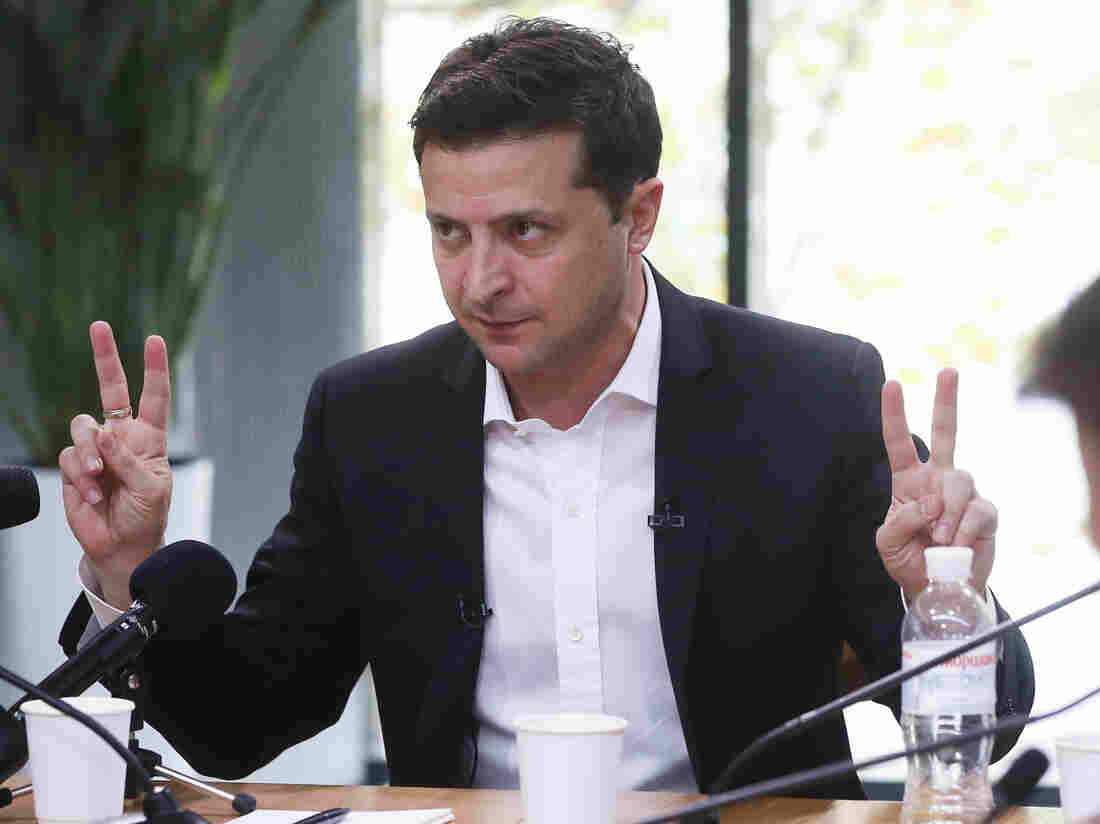 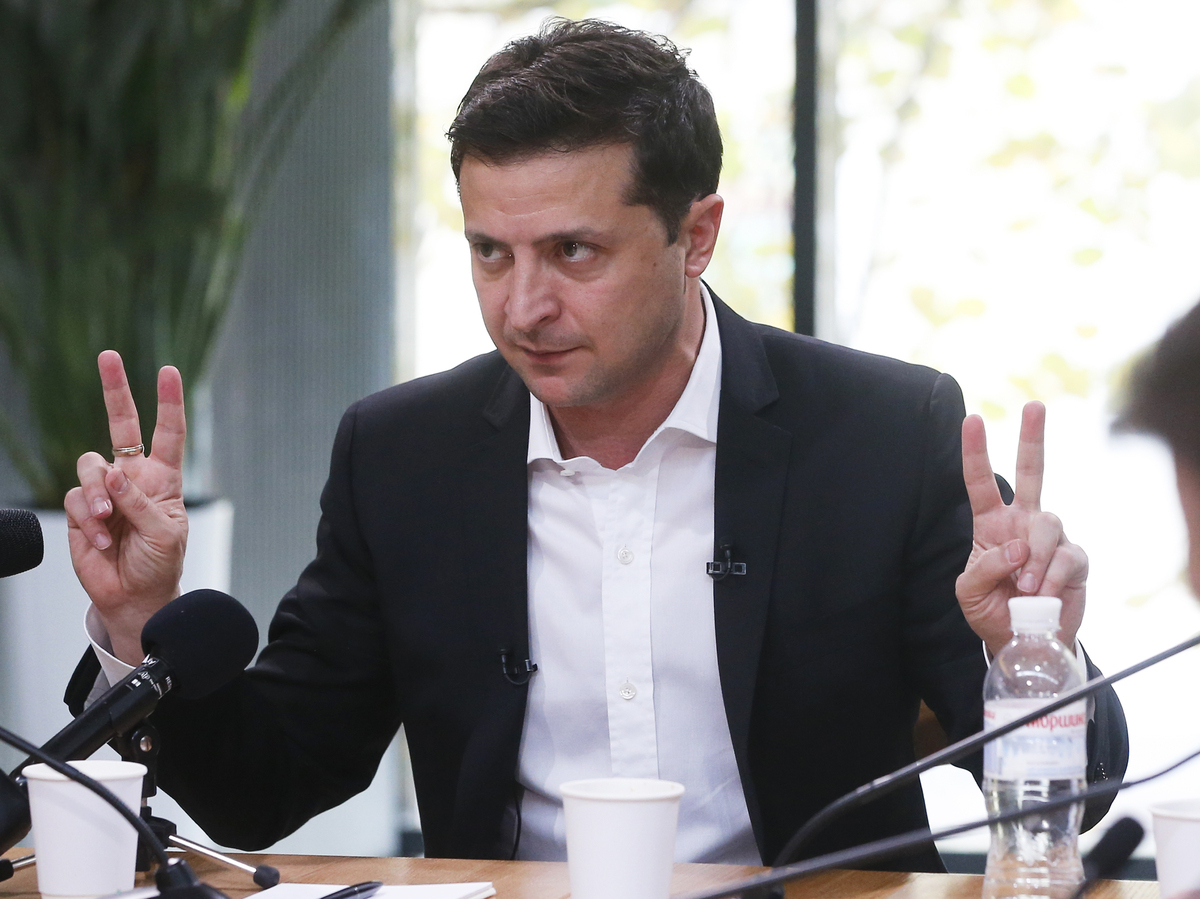 When President Trump held his first meeting with Ukrainian President Volodymyr Zelenskiy at the United Nations last month, one offhand remark by the U.S. president stood out to many Ukrainians.

"I really hope that you and President Putin get together and can solve your problem," Trump said, referring to Russian leader Vladimir Putin. "That would be a tremendous achievement. And I know you're trying to do that."

Zelenskiy's "problem," of course, is a Russian-backed insurgency that has cost the lives of more than 13,000 people since 2014. In just a couple of sentences, Trump dashed Ukrainian hopes of more active U.S. support in securing a durable peace with Moscow. 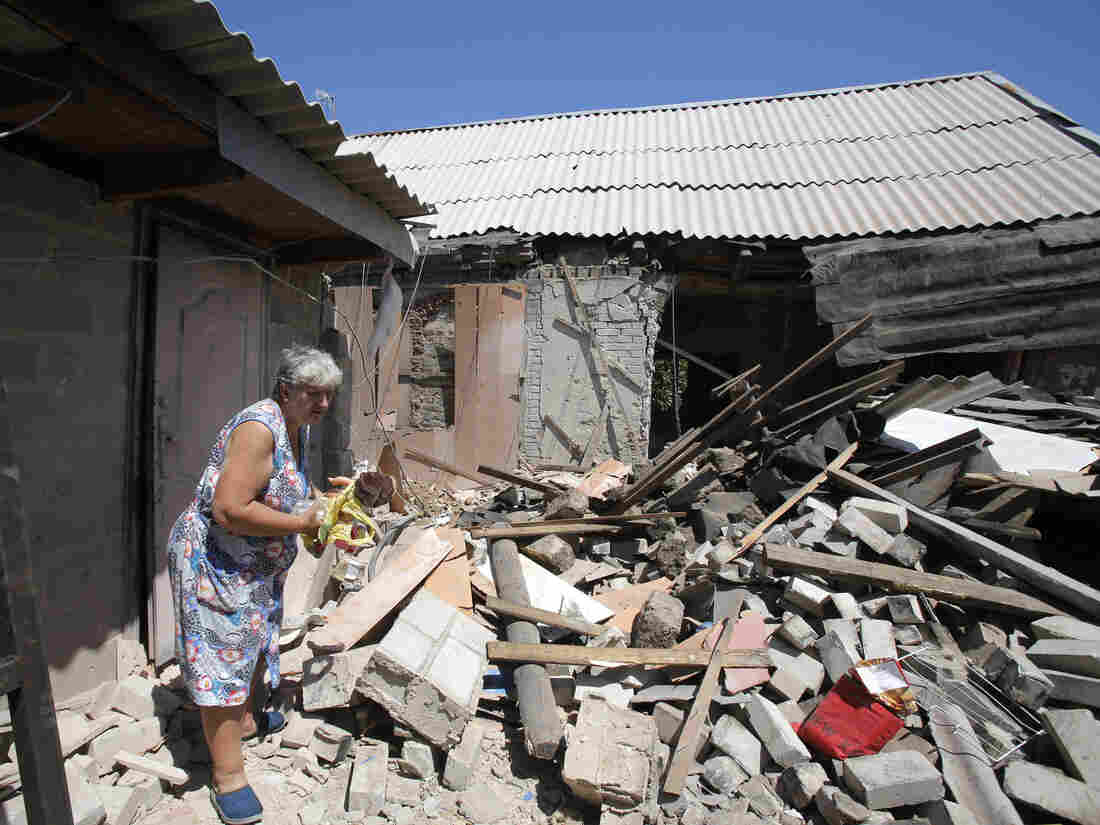 A woman walks in the ruins of a house after an artillery attack in the Ukrainian village of Mariinka on June 14. A conflict with Russian-backed separatists has killed 13,000 people since 2014. Anatolii Stepanov/AFP/Getty Images hide caption 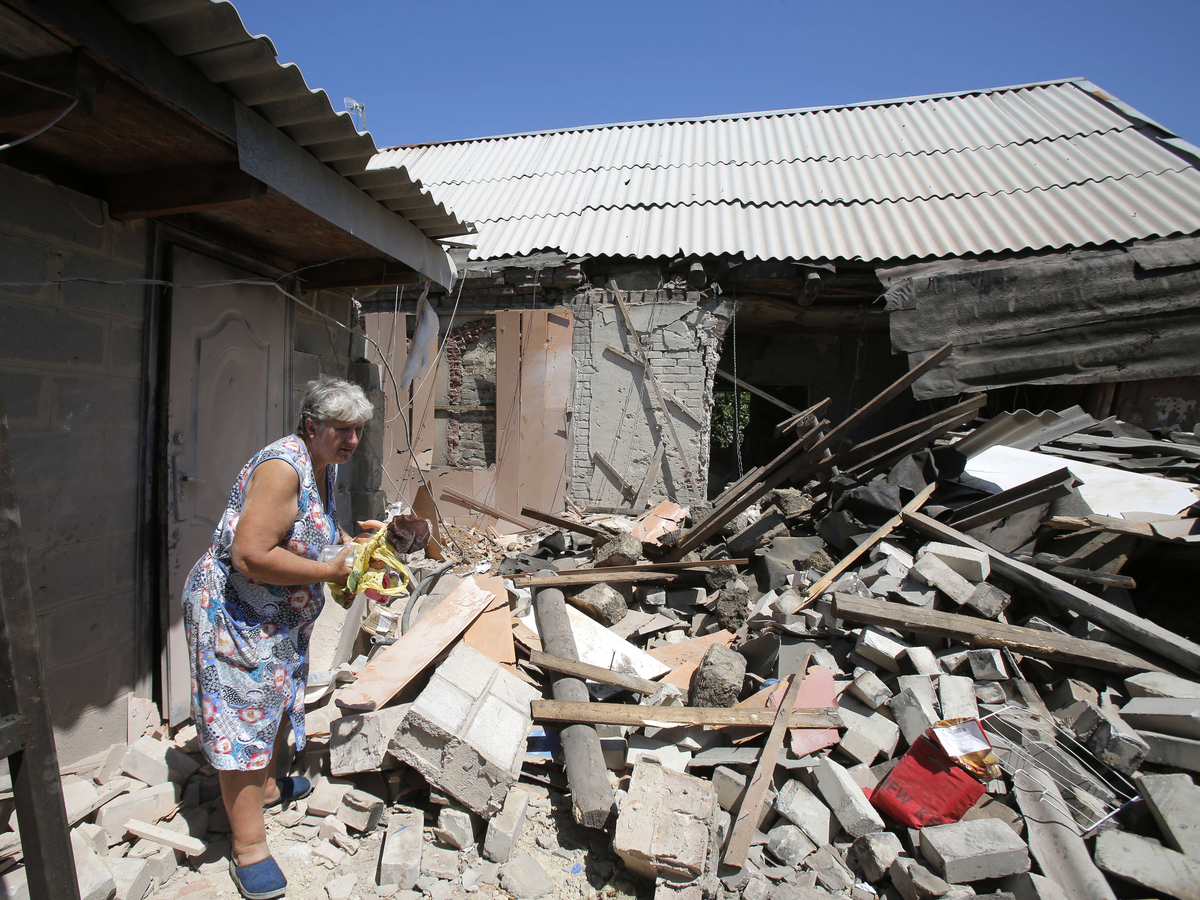 A woman walks in the ruins of a house after an artillery attack in the Ukrainian village of Mariinka on June 14. A conflict with Russian-backed separatists has killed 13,000 people since 2014.

With Washington distracted by the impeachment inquiry that grew out of a July phone call between Trump and Zelenskiy, the recently elected Ukrainian leader is being left largely to his own devices in the first big test of his presidency: fulfilling a campaign promise to end the grinding, low-level war in eastern Ukraine.

"Ukraine is becoming more and more isolated after Zelenskiy's visit to New York," said Alyona Getmanchuk, director of the New Europe Center in the Ukrainian capital Kyiv. "We cannot count on the U.S. anymore in our peace negotiations with Russia."

The first casualty in Trump's effort to spur a Ukrainian investigation into former Vice President Joe Biden was the U.S. ambassador to Kyiv, Marie Yovanovitch, whom Trump called "bad news" in his July 25 conversation with Zelenskiy. She was recalled to Washington in May and her post has remained vacant ever since.

Then, after the whistleblower complaint about that phone call was publicized last month, the Trump administration's special envoy for Ukraine, Kurt Volker, resigned. Text messages later released in the impeachment inquiry showed Volker trying to mediate between Ukrainian officials and Rudy Giuliani, Trump's personal lawyer who had inserted himself into talks with the incoming Zelenskiy administration.

Now Ukrainian officials can no longer be certain that their American interlocutors, such as high-ranking State Department officials, are expressing the views of Trump, says Kostyantyn Gryshchenko, a former Ukrainian foreign minister. 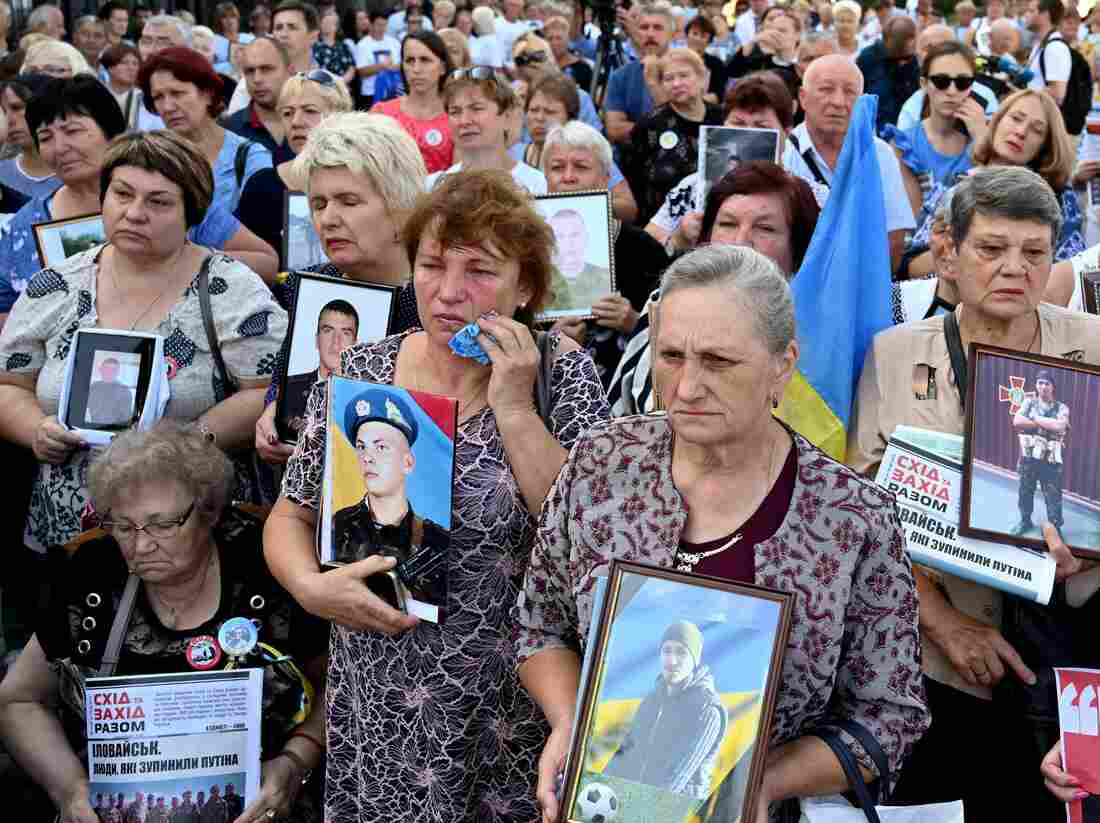 Mothers and widows of Ukrainian servicemen hold pictures of their relatives during a memorial rally in front of the Russian embassy in Kyiv, Ukraine's capital, in August. Sergei Supinsky/AFP/Getty Images hide caption 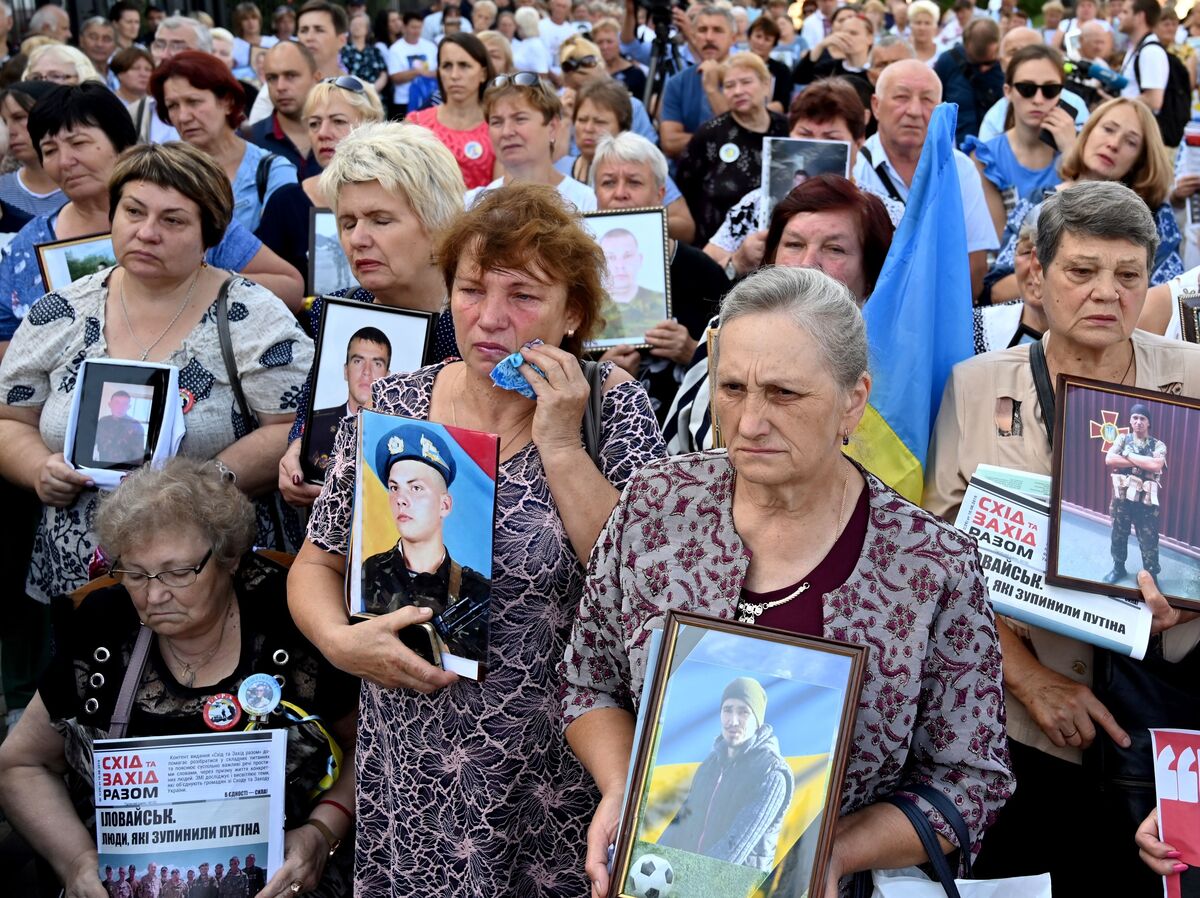 Mothers and widows of Ukrainian servicemen hold pictures of their relatives during a memorial rally in front of the Russian embassy in Kyiv, Ukraine's capital, in August.

"The current situation is extremely unfavorable for Ukraine. But the danger lies in the Zelenskiy team's single-minded pursuit of settling the conflict ASAP, whatever the cost," Gryshchenko said. "They have no stamina and no experience needed to face the overwhelming challenge of dealing with the Kremlin, which is in no hurry to meet Ukraine's demands halfway. Kyiv has to be ready to stand its ground as long as it takes."

Ukraine's main strategic goal is to regain full control over its border with Russia, which has provided separatists in the Donetsk and Luhansk regions with a constant stream of supplies.

Zelenskiy has already come under fire domestically for his willingness to meet the Kremlin's preconditions for holding a summit with Putin and the leaders of France and Germany, guarantors of a stalled peace process known as the Minsk agreement.

In an Oct. 3 address to the nation, Zelenskiy said he was ready to hold elections in regions controlled by Russian proxies and grant the territories a "special status" as foreseen in the Minsk deal. He pledged the vote would be free and fair, and that Ukraine would eventually take control over its eastern border. He was less clear on the steps to getting there.

Critics say the vagueness of Zelenskiy's plan plays to Russia's strengths — and Ukraine's weaknesses. Chanting "no capitulation," thousands of protesters on Sunday demonstrated on Kyiv's Independence Square, the gathering point for two popular revolutions over the past 20 years.

Zelenskiy, a professional comedian before he entered politics, was elected in a landslide last spring, catapulted to power by popular anger over poverty, corruption and the absence of peace. Although his approval ratings top 70%, Ukrainians' attitudes toward Zelenskiy's peace initiative are ill-defined. According to one recent survey, more than 60% have no clear-cut opinion on his plan, while 23% are opposed and 18% support it.

The Minsk deal, finalized in 2015, is the basis for Zelenskiy's effort to end the fighting. His predecessor, Petro Poroshenko, agreed to it to stop an escalating conflict he could not win.

Poroshenko signed the Minsk agreement as a tactical move, but didn't plan to implement it, says Oleksiy Melnyk, a foreign policy expert at the Razumkov Center, a think tank in Kyiv. He calls the document a "Russian plan" that gives the Kremlin a veto over internal political processes within Ukraine.

Melnyk's recommendation to Zelenskiy would be to spell out exactly what his government would consider a victory in eastern Ukraine, as well as the steps to achieving it.

"In the worst-case scenario, we would probably be pushed into the corner by our European partners and Russia to implement the Russian plan," Melnyk said.

Support from Germany and France, which also signed the Minsk agreement, is no longer as strong as it was. In the White House's partial transcript of the July phone call, Zelenskiy is cited as agreeing with Trump "not only 100%, but actually 1,000%" that German Chancellor Angela Merkel and French President Emmanuel Macron are not doing enough to help Ukraine.

Merkel is looking toward the end of her fourth and final term in two years, while Macron is pushing to mend ties with Putin. The European Union imposed sanctions on Russia in 2014 to punish the Kremlin for its military intervention in Ukraine. Macron now sees movement on the Minsk agreement as the key to normalizing relations with Russia.

"Macron is interested in a quick result, not a sustainable resolution of the conflict. That's why people in Ukraine are quite skeptical," said Getmanchuk of the New Europe Center.

The Zelenskiy administration initially saw Trump as a possible ally in revived negotiations. One idea was to try to convince Trump to invite Putin and Zelenskiy to next year's Group of Seven summit in the U.S., according to Getmanchuk.

"The Ukrainian logic was that Trump would position himself as the No. 1 peacemaker where Merkel and Macron failed," she says. But after the scandal surrounding Zelenskiy's trip to the New York, that idea became moot.

"We don't think of Trump as an ally," she says. "At best, he could be a referee; at worst, he could create more and more obstacles."

But even as the Trump administration's interest in Ukraine shrinks, some Ukrainians think it's time they do more to take destiny into their own hands.

Even though U.S. and European support may be waning, Zelenskiy is not facing Putin all on his own, says Nataliya Gumenyuk, the head of Kyiv's independent Hromadske broadcaster.

"He's not alone because he represents Ukrainian society," she said. "He has leverage and credibility because he was elected with such huge support. Even in the eyes of Putin, who is not very democratic, this popularity matters a lot."

Zelenskiy, she says, still has a chance to succeed.