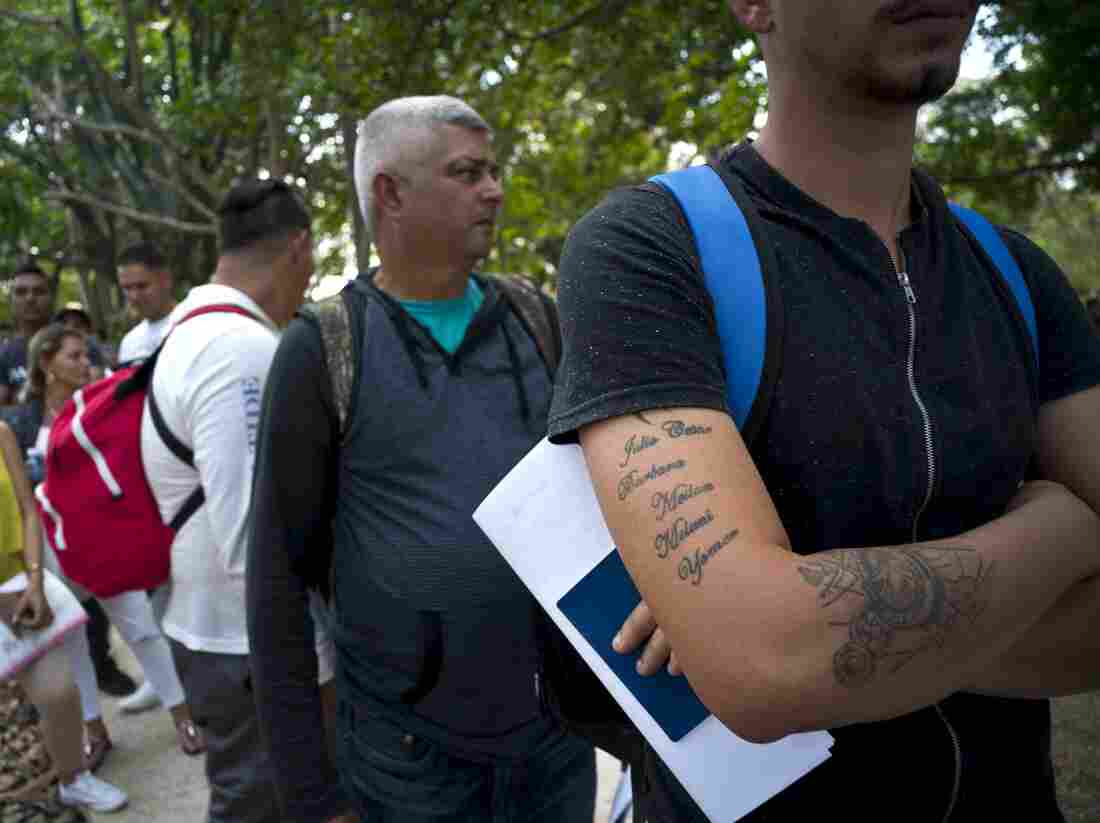 Cubans wait their turn to enter Panama's embassy in Havana to apply for travel visas to Panama last March. The U.S. State Department eliminated a coveted five-year tourist visa for Cubans, dealing a heavy blow to entrepreneurs and Cuban members of divided families who used the visas to see relatives in the U.S. and buy precious supplies for their businesses on the island. Ramon Espinosa/AP hide caption 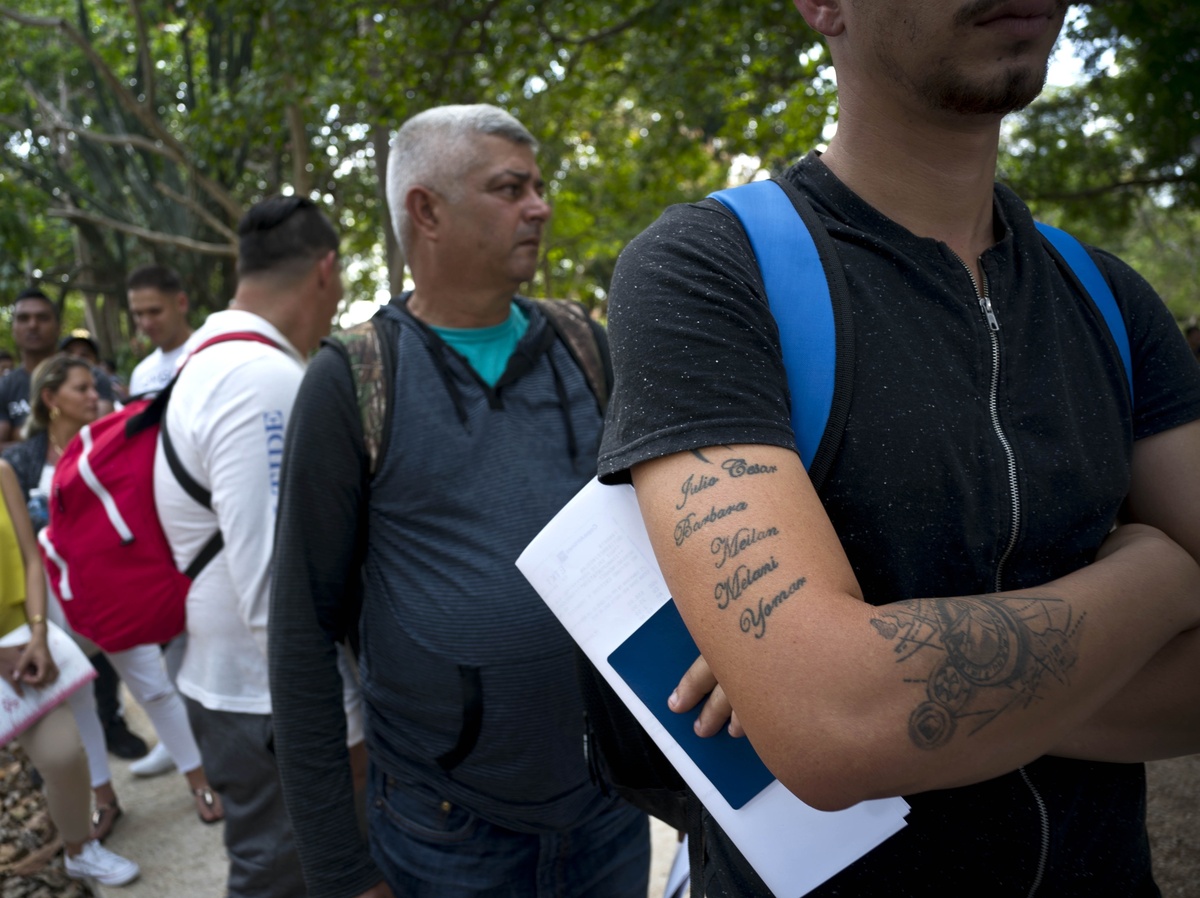 Cubans wait their turn to enter Panama's embassy in Havana to apply for travel visas to Panama last March. The U.S. State Department eliminated a coveted five-year tourist visa for Cubans, dealing a heavy blow to entrepreneurs and Cuban members of divided families who used the visas to see relatives in the U.S. and buy precious supplies for their businesses on the island.

Earlier this year, the State Department quietly rolled out new limits on one of President Trump's favorite targets: the diversity visa lottery.

The White House made ending the program one of the "pillars" of its immigration policy proposal last year. But those proposals went nowhere on Capitol Hill.

So the administration tried something different: It is restricting who can apply for the diversity visa, in a way that advocates say will make it much harder for low-income immigrants to apply.

Why U.S. Visa Numbers Are Down

Why U.S. Visa Numbers Are Down

"This particular backdoor approach to getting rid of the program — rather than going through Congress, just making it very difficult for people to apply — that was something we didn't see coming," said Amaha Kassa, the executive director of African Communities Together, a nonprofit that helps African immigrants and their families.

To immigrant advocates, the diversity visa is a small example of a larger pattern. They say the Trump administration is trying to use rules, regulations, executive orders and proclamations — what one administration official calls "workarounds" — to make sweeping changes to the legal immigration system without approval or input from Congress. And they warn that these backdoor changes will make it harder for immigrants who are poor and from developing countries to resettle in the U.S.

The diversity visa has long been a favorite target at the president's campaign rallies.

"The country puts the name in the basket, and you pick people out of the lottery. Well let's see this one's a murderer. This one robbed four banks," Trump said at an event in Cincinnati earlier this year.

Several things about the president's descriptions are misleading or simply wrong. It's the U.S. State Department that conducts this lottery, not foreign governments. Applicants themselves decide whether to enter, not the governments of their native countries. And applicants are carefully vetted and screened before they're allowed into the U.S.

But the program's track record isn't perfect. Two years years ago, an immigrant from Uzbekistan who had come to the U.S. years earlier on a diversity visa was accused of driving a truck down a crowded bike path in Manhattan, killing eight people.

Despite pressure from the White House, Congress has not moved to end the program, which admits about 55,000 immigrants a year, largely from Africa and Europe, and gives them a path to a green card. Advocates say those immigrants tend to have higher levels of education and speak better English than other immigrants, and they come from countries that haven't historically had high levels of immigration to the U.S.

But the Trump administration didn't back down. In June of this year, the State Department announced a new rule: To be eligible for the diversity visa lottery, people must have a passport at the time they apply. The rule is designed to prevent fraud, officials said.

That may not sound like a big deal. But in many countries, obtaining a passport is difficult and time-consuming, says Kassa, whose organization is suing to block the new rule.

"One of the plaintiffs on this lawsuit, he is a mechanic in a small town in Ethiopia. And in order to go to the place where he can apply for a passport he has to take three different buses. It's going to take him a full day to travel there. And the fees for acquiring a passport might be as much as a week's wages for him," Kassa said. "So what we're saying is, that is a huge burden."

It wasn't long ago that Republicans accused the Obama administration of making immigration policy without input or approval from Congress. Now it's the Trump administration that has gotten tired of waiting for Congress.

"Time is our opponent," said Ken Cuccinelli, the acting director of U.S. Citizenship and Immigration Services, which handles legal immigration. Cuccinelli was interviewed last month at the Center for Immigration Studies, a think tank in Washington that advocates for lower levels of immigration. He was asked about efforts to tighten up the rules governing high-tech visas, among other things.

"We start all these discussions with the assumption of the law not changing, which is a sad place to start a discussion. I mean, the right way to decide policy is for Congress and the president to decide policy. That's the way the government was set up," Cuccinelli said. "In the alternative, we talk about what amount to workarounds to that. Of course, they have to be within the boundaries of the law."

The Trump administration has turned to workarounds for many of its top immigration priorities — including the "four pillar" framework the White House laid out at the beginning of 2018.

The first pillar was border security. The White House wanted $25 billion for a wall on the southern border and other security enhancements. But Congress appropriated only $1.4 billion. So the Trump administration is seeking to use an additional $8 billion in military funding.

The second and third pillars were the cancellation of the diversity visa lottery and the end of "chain migration" — the phrase critics use to describe the current immigration system, which gives priority to family members of immigrants already in the U.S. The White House wants to move toward a "merit based" system, one that favors immigrants with more skills and more education.

Critics say the administration is still trying to achieve those goals — but in ways that don't require approval from Congress.

They point to the "public charge" rule, set to take effect next week, which would make it harder for immigrants to get green cards if they use a wide range of public benefits, such as food stamps. The rule also adds new income requirements for immigrants, favoring those who make more than 250% of the poverty line.

Advocates are also concerned about the impact of an executive proclamation on health care issued last Friday night. It requires immigrants coming from abroad to prove that they will have health insurance within 30 days or that they can afford to pay for their own medical care. That could potentially bar as many as 375,000 immigrants annually, according to an analysis by the nonpartisan Migration Policy Institute.

Trump administration officials say the idea that immigrants should be self-sufficient has been part of U.S. law for a long time. In an interview with NPR's Morning Edition in August, Cuccinelli defended the public charge rule by revising the poem engraved at the base of the Statue of Liberty: "Give me your tired and your poor who can stand on their own two feet and who will not become a public charge," Cuccinelli said.

But to critics, it appears that the Trump administration is doing more than just revising that poem — it's trying to reshape how the country defines itself as a nation of immigrants.

Immigrant advocates remember Trump's reported rant about "s***hole" countries. And Kassa says the administration is trying to keep out immigrants from the Caribbean and African countries.

"They're trying to keep out anyone who doesn't fit with their particular vision of who's American. And they're doing it by selling, you know, a myth, a lie that people are criminals or that they're dependent. When the reality is these are exactly the types of immigrants and their families who've helped build America," he said.