Accessibility links
The Key To Raising Brilliant Kids? Play A Game : Life Kit We all want our kids to succeed, but that doesn't mean running math drills. Author Kathy Hirsh-Pasek explains the "six C's" that kids need to thrive and why raising brilliant kids starts with redefining brilliant. 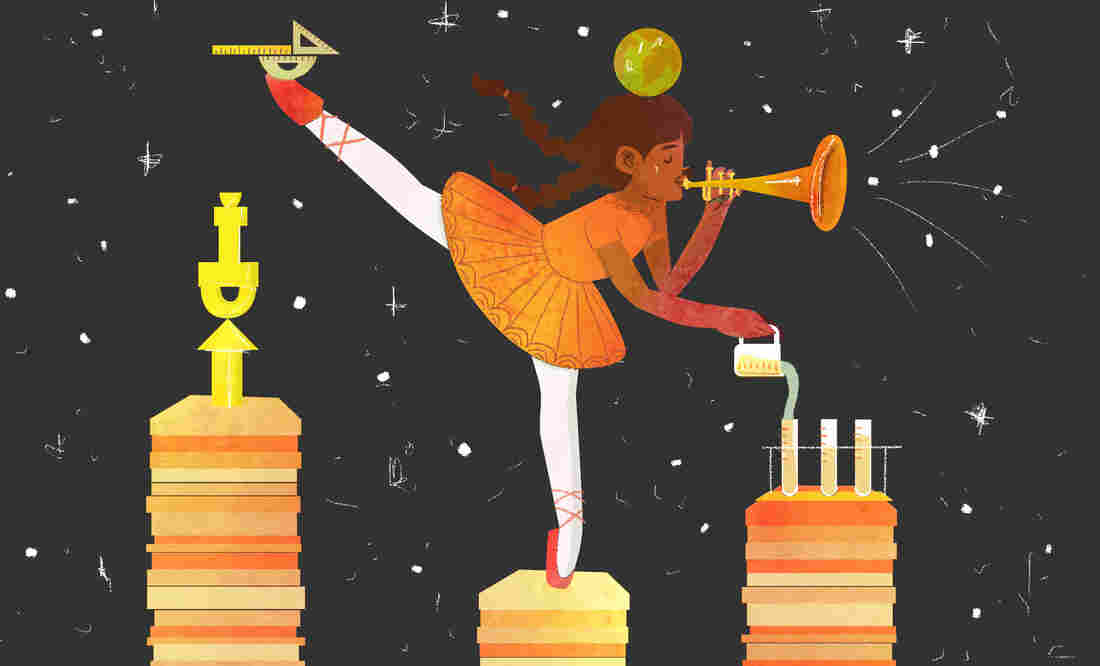 We all want our kids to reach their full potential, but that doesn't mean running math drills. Author Kathy Hirsh-Pasek explains the "six C's" that kids need to succeed and why raising brilliant kids starts with redefining brilliant. LA Johnson /NPR hide caption 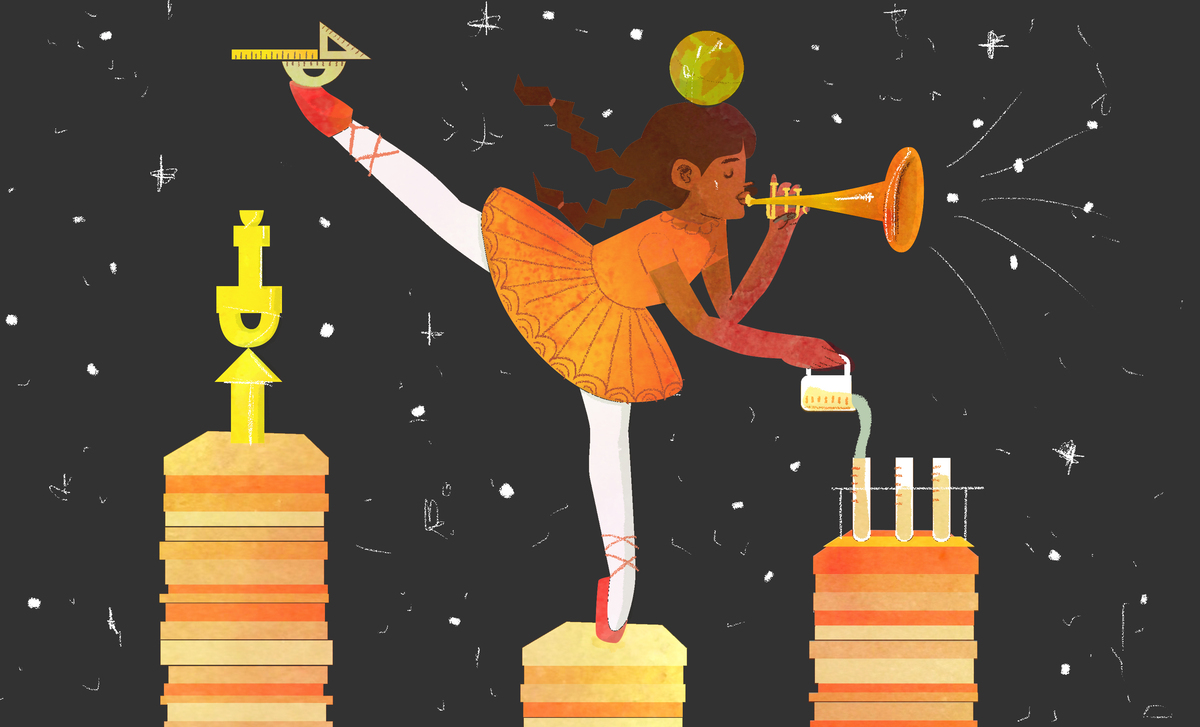 We all want our kids to reach their full potential, but that doesn't mean running math drills. Author Kathy Hirsh-Pasek explains the "six C's" that kids need to succeed and why raising brilliant kids starts with redefining brilliant.

We all want to raise smart, successful kids, so it's tempting to play Mozart for our babies and run math drills for kindergartners. After all, we need to give them a head start while they're still little sponges, right?

"It doesn't quite work that way," says Kathy Hirsh-Pasek, a professor of psychology at Temple University and co-author of Becoming Brilliant: What Science Tells Us About Raising Successful Children with Roberta Golinkoff. She's been studying childhood development for almost 40 years.

So how does it work? NPR Education reporters and Life Kit hosts Anya Kamenetz and Cory Turner talk with Hirsh-Pasek about the "six C's" that kids need to succeed — collaboration, communication, content, critical thinking, creative innovation and confidence — and why raising brilliant kids starts with redefining brilliant.

Cory Turner: This is your golden opportunity to speak directly to all of these overzealous, anxious parents. And full disclosure, I have been one of them at times. Every parent is. So explain to us why we need to cool our jets.

Kathy Hirsh-Pasek: Cool your jets because it's healthier for your child. Let's look at what counts as success. Give me your take on these two definitions:

One is your child's success is to be a good reader, a good writer and really good at math. We'll call that the traditional view.

Two is what I call the 21st century view of success: a happy, healthy, caring, child who grows up to be a collaborative person, a creative innovator, a thinking person and a social person, while also being a good citizen.

Hirsh-Pasek: OK, the question then becomes how do you get there?

Pushing down the kind of math, reading and writing skills to younger and younger ages ain't gonna give you No. 2 because you're not building a full, whole child human being.

The science says that the human brain was actually built to endure wonderful, long-term relationships. One of my friends says it's a "socially gated brain."

Anya Kamenetz: Socially gated, what does that mean?

Hirsh-Pasek: Everything goes through the social. Everything we learn starts with collaboration and relationships. When you think of it, we aren't born ready to hop out of the womb and into the world. We have a lot of learning to do, and the learning is social.

Raising Brilliant Kids — With Research To Back You Up

Turner: You talk a lot about your six C's. The fundamentals [of] what every kid needs to thrive. The first of the six, the most fundamental, is collaboration.

The next part that's built on collaboration is communication — that's grunts, first words, hand gestures and it's language. "How do I learn the contents of your mind? If I can tap into your mind, Mom I'm going to know so much more than I can do having to learn it all on my own."

Kamenetz: Does that mean we should monologue at our children constantly and never stop talking? [Laughter.]

Hirsh-Pasek: Monologue is not quite the way to do it. It has to be dialogue, that back and forth conversation. As parents, we sometimes jump in because the baby didn't say something fast enough, and we don't want any lull in that conversation. But if we let it lull for just a moment even 10-week-olds can start to have a conversation with us.

Now, once you have a good communication base built on a strong collaboration base, then you can have strong content skills. And that can be reading content, writing content. There's also learning-to-learn skills under content, and that's things like learning how to focus your attention.

The fourth C, critical thinking, has to happen on top of content.

The fifth C, creative innovation, also depends on having strong content and strong critical thinking. Because you have to hit the right buttons to know how to make something that's truly novel. It doesn't just come from monkeys and a jar of paint. It comes from actually being thoughtful.

And our last C is confidence. This is a very hard one for me as a parent, and I suspect for everyone as a parent, which is our children learn the most through failure. If we never let them fail, then they never know what it feels like to thrive and succeed. So it's a growth mindset. It's grit. The perseverance to keep at it even though the tower fell down when you tried to make it high.

So there are our six C's, each one built upon the other and they cycle and cycle like a spiral staircase.

Hirsh-Pasek: When we're at the grocery store or the corner shop, we're often pretty rushed. We just want to get what's on the list and get out. As part of what we call our Playful Learning Landscapes experiments, we tried to change that dynamic just a little bit. So we put up these crazy signs that say "I'm a cow. Milk comes from a cow. What else comes from a cow?" We were curious, would having these silly signs make any difference to the way parents engaged in the grocery store? What were we looking for? Collaboration and communication. By gosh if we didn't get a 33% increase in the conversations when you put the signs up. It's interesting that you can change behavior by changing the environment around us.

Turner: I want to go back to the intersection of collaboration, communication and content. It seems to me in a classroom context that [kids] are more likely to learn to pick up the content and become better critical thinkers if they're doing that in a really collaborative context. How important is it to smush the desks together and get kids working together?

Kamenetz: And is that really the answer?

Hirsh-Pasek: I don't know that just smushing will work. It's a little more like creating a common goal and then trying to solve that goal together. And when you do that it's just so much richer.

It is amazing what our kids can do. I was taking my granddaughter Ellie — who was 3 at the time — we were just marching over to the playground and there happened to be a little forest area along the way. So I pointed out that this really cool thing happened whenever there was a break in the trees, but I didn't tell her that part. I said "Oh my gosh, what is that?" She goes, "I don't know." I said, "I think it's your shadow. That's so cool." And she tried to chase her shadow for a little bit. Then we went under a tree again, and of course the shadow disappeared. And then we came out from under the tree, and there it was again. So together we were doing a science experiment. And I said, "I wonder if I could predict when you're going to see your shadow." So we did. We tried to get to a hypothesis of when we might see that shadow, and by gosh if she didn't derive it.

Kamenetz: I want to know if you could illustrate for us a little bit about how the six C's work around things like getting our kids to help out around the house or motivation in school.

Hirsh-Pasek: There are fun games you can play that build on the six C's and get the motivation up.

It turns out that you learn better when things are joyful than when they're not joyful. So I bet your kids would help you a whole lot more if you made a game from the darks and the whites in that laundry room. Maybe you just have to throw it from different lines: a three-point line, two-point line, maybe even have the three-quarter-point line and the one-quarter-point line, and then they do fractions, right?

It should be meaningful as opposed to meaningless, so when we're memorizing flashcards stuff, that's not play.

Generally, play is socially interactive as opposed to solo.

And it's iterative. That means each time you revisit it, there's something new to discover about it. I think you can have true play where the kid is the director, not the adult. And adults out there, don't interfere by jumping in and deciding what's going on with your child's play. Help by setting the environment and going with their story and supporting it.

Raising Kids Who Love Math — Even If You Don't