Accessibility links
Book Review: In 'Catch And Kill,' Ronan Farrow Offers A Damning Portrait Of A Conflicted NBC The book ties the killing of his story on Harvey Weinstein's alleged sexual misconduct to a pattern of harassment and abuse within NBC — including payouts and rape allegations against Matt Lauer. 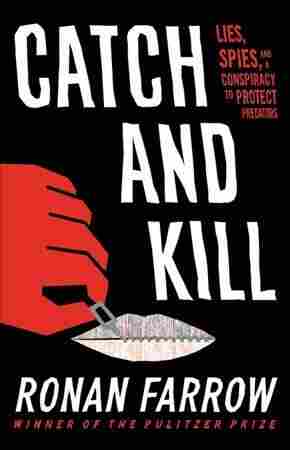 Lies, Spies, and A Conspiracy To Protect Predators

Editor's note: This review contains explicit accusations from Catch and Kill that some readers may find upsetting.

"If NBC, which has the evidence, doesn't go forward with this story, it's a scandal."

That was what Ken Auletta, a writer for The New Yorker who had tried and failed to break the story of Harvey Weinstein's alleged serial sexual abuse of women, said when he found out that Ronan Farrow had obtained tape of Weinstein admitting to groping the model Ambra Gutierrez.

NBC did not go forward with the story. Ronan Farrow's new book, Catch and Kill, is a measured but damning portrait of that failure at NBC, which he ties to a pattern of harassment and abuse within the network.

In 2016, Farrow, then an investigative journalist at NBC, began work on a series about "undercovered stories" in Hollywood. "Pedophilia, racism, harassment..." as he explained to NBC host Matt Lauer, who would soon be fired for his own serial sexual misconduct. "Sounds terrific," Lauer said.

As Farrow started making calls, the same name kept coming up: the producer Harvey Weinstein. But over the coming months, as Farrow and his producer Rich McHugh amassed more and more stories of women saying they were bullied, harassed and assaulted, their bosses at NBC began hedging — particularly Noah Oppenheim, the head of NBC News:

" 'People say a lot of things when they're trying to get rid of a girl like that.'

" 'For the Today show, a movie producer grabbing a lady is not news.' "

And finally, after Farrow wouldn't drop the investigation: "' There's just no room for you in the budget anymore.' "

Eventually, Farrow took the story to The New Yorker, where it, alongside reporting from The New York Times' Jodi Kantor and Megan Twohey, helped launch the #MeToo movement.

In memos and statements since, NBC has claimed that Farrow just didn't have enough evidence — despite multiple credible sources and the Gutierrez tape. But Farrow reports that many of the NBC executives who obstructed his investigation have been accused of sexual misconduct themselves, which fundamentally compromised their ability to support the story.

Among other instances, Farrow reports that NBC News Chairman Andrew Lack "pursued sexual relationships with underlings and talent" — one event ended with a nondisclosure agreement; the other, in professional retribution against the woman involved.

David Corvo, the senior executive producer for prime-time news, was assigned to shore up the story. The Daily Beast would later report that he too had been accused of sexual harassment. "I left the meeting with Corvo feeling reassured," Farrow writes at one point. "The next day, unbeknownst to me, NBC finalized a nearly $1,000,000 separation agreement with Corvo's accuser."

Tom Brokaw, whom Farrow leans on for support and advice during his fight with NBC executives, is also eventually accused of sexual harassment. NBC's Mark Halperin, Chris Matthews and Matt Zimmerman are all accused of harassment or worse.

In one of the book's most difficult chapters, Farrow describes the details of the complaint that led to host Matt Lauer's firing, which had largely been characterized by NBC and others as an inappropriate relationship. Instead, Farrow reports, it was rape.

"I've lost everything I cared about," Brooke Nevils, Lauer's accuser, told Farrow, going on the record for the first time. "My job. My goals."

Nevils went on to have other encounters with Lauer, which is apparently what allowed the company to describe the behavior as an affair, rather than an attack. During this time, Nevils said, she felt unable to say no because of his position of power.

"You need to know that I was raped," Farrow writes that Nevils told a friend. "And NBC lied about it."

Farrow also describes a culture of generalized sexism and bad journalism: MSNBC President Phil Griffin pressuring female producers into attending a peep show in Times Square and, later, pressuring Farrow to cut quotes in a different story to intentionally alter their meaning — what is, or should be, a firing offense at most news outlets.

On Wednesday, Lauer and Lack denied accusations in the book.

Catch and Kill creates a stark contrast with She Said, by Jodi Kantor and Megan Twohey. They should be read together in college journalism courses, not only as stunning accounts of what good investigative journalism does but also as how institutions can find strength in legacy, reputation and numbers or use their substantial power to diffuse guilt and protect the powerful. Farrow quotes a source who said Weinstein exulted when he found out NBC wouldn't run the piece: "He kept saying, 'If I can get a network to kill a story, how hard can a newspaper be?' " Significantly harder, it turns out.

Farrow is cutting about the avoidant and cryptic language NBC executives used to dodge responsibility. It was not a person who killed the story:

" 'Well if the press would stop covering it, it will go away,' " said one of the company's lawyers in a crisis meeting after the Lauer story broke. "There was a pause," Farrow writes, then a journalist said, " 'But we are the press.' "

After The New Yorker piece came out, executives at NBC, Farrow writes, were "reaching out, saying they knew I had a new book coming out — I'd managed to finish the foreign policy book I'd ignored for so long — and they'd be happy to consider having me back on air to promote it, if I'd come in and reach a formal agreement about not rehashing the past."

Outside NBC, other names pop up in the book as well: Hillary Clinton cancels an interview with Farrow after her press person tells him: "[W]e know about the big story you're on ... it's a concern for us." The man, Nick Merrill, later said the cancellation was unrelated. George Pataki, the former governor of New York, personally calls Weinstein to warn him of Farrow's reporting. The high-powered lawyer Lisa Bloom, one of the notable villains of She Said, courts Farrow, not disclosing that she is working for Weinstein.

While Weinstein was making threatening calls to NBC executives, his allies at the National Enquirer were digging into Lauer, apparently hoping to make it harder for NBC to publish allegations.

All the while, Weinstein was waging a desperate war to crush the story. Farrow is trailed throughout the book by private investigators working for the shady Israeli intelligence firm Black Cube. They follow him to work, watch his house and compile dossiers on his family members. American Media Inc., the parent company of the National Enquirer, was also having people in Farrow's orbit surveilled, according to employees who spoke to Farrow. That investigator briefly followed Farrow's partner before deciding his routine was too predictable. " 'I'm interesting!' Jonathan said, when I told him. 'I am a very interesting person! I went to an escape room!' " (For all its horrors, Catch and Kill is often sweetly funny.)

Ultimately, Weinstein believed that Farrow's weak point was his immediate family: His sister Dylan Farrow has maintained for years that their father, Woody Allen, molested her when she was a kid.

"You couldn't save someone you love, and now you think you can save everyone," spits Weinstein in one of many angry calls with Farrow. His bosses at NBC make the same point more gently: that he is too close, or too invested in the story because of his sister. But instead of a liability, Dylan Farrow appears throughout the book as a force of reason and compassion, urging her brother to do the right thing. "I know what it's like to have people stop fighting for you," she said.