Accessibility links
Marie Yovanovitch, Recalled U.S. Ambassador To Ukraine, Testifies Marie Yovanovitch was recalled from her post in May after criticism from some Republicans, including the president's eldest son, that she was not supportive of the administration's policies. 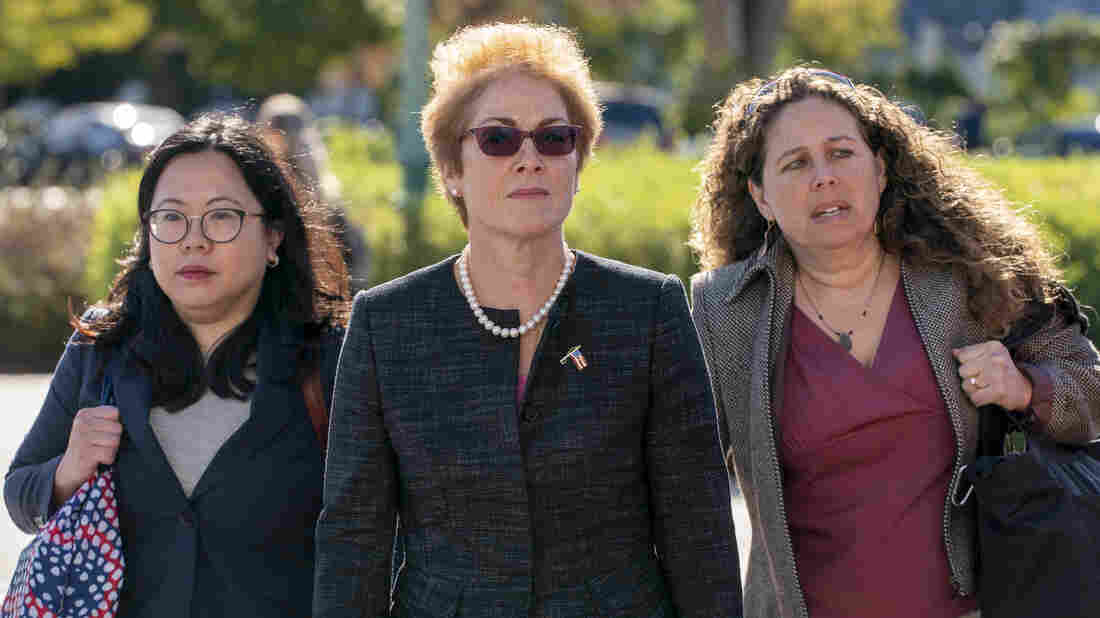 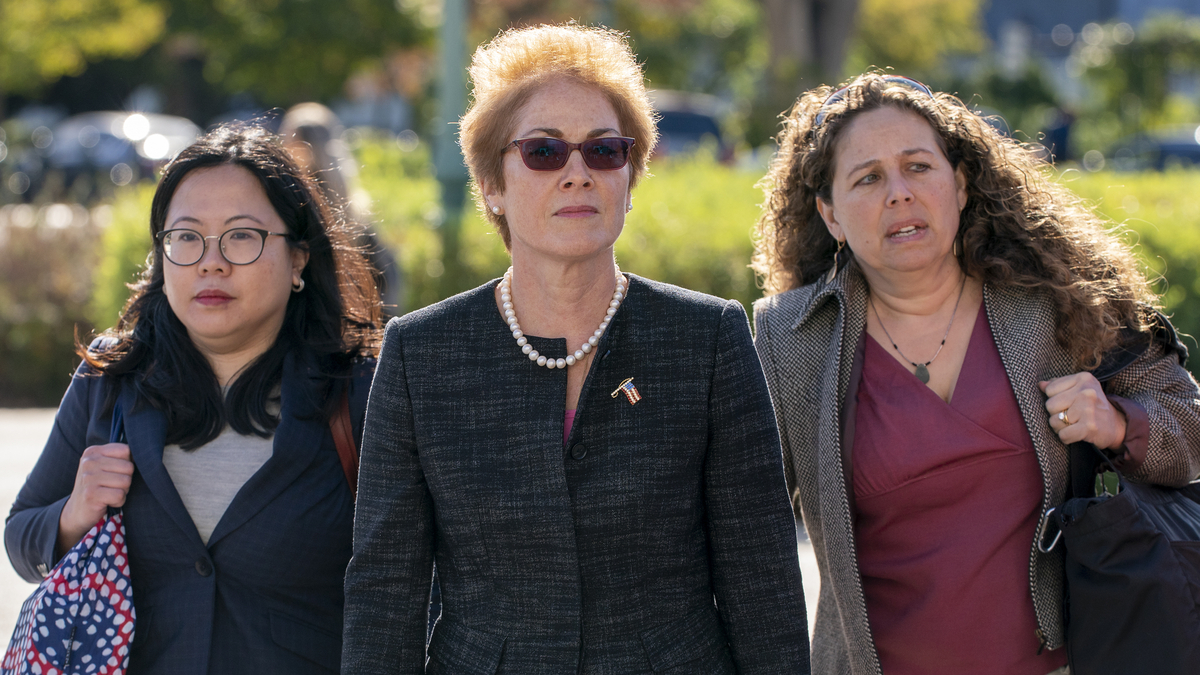 Marie Yovanovitch, the former U.S. ambassador to Ukraine, told three House committees in a closed deposition that President Trump pressured the State Department to remove her from her post, according to prepared remarks reported by multiple outlets.

Yovanovitch was recalled in May 2019. When she returned to Washington, she said, she pressed the deputy secretary of state about why she was told to leave.

The career diplomat was informed that "there had been a concerted campaign against me, and that the Department had been under pressure from the President to remove me since the Summer of 2018," according to the statement. NPR has not independently obtained the remarks to the Intelligence, Foreign Affairs and Oversight committees.

The deputy "also said that I had done nothing wrong and that this was not like other situations where he had recalled ambassadors for cause," Yovanovitch said.

The chairs of the three committees said they subpoenaed Yovanovitch to compel her to testify after they learned Thursday evening that the White House had directed her not to appear for a voluntary interview.

"This is the latest example of the Administration's efforts to conceal the facts from the American people and obstruct our lawful and constitutionally-authorized impeachment inquiry," Intelligence Chairman Adam Schiff, D-Calif.; Foreign Affairs Chairman Eliot Engel, D-N.Y.; and Oversight Chairman Elijah Cummings, D-Md., said in a written statement.

Yovanovitch was appointed by then-President Barack Obama in 2016 and confirmed without any controversy by the GOP-led Senate.

She has emerged as a key fact witness in the House Democrats' investigation following a whistleblower complaint about Trump's telephone call with Ukrainian President Volodymyr Zelenskiy on July 25 that triggered the inquiry.

Investigators are interested in learning details about Yovanovitch's interactions with the president's personal lawyer Rudy Giuliani and others seeking a Ukrainian investigation into former Vice President Joe Biden and his son Hunter's business interests in one of the country's largest gas companies.

In her prepared remarks, Yovanovitch said she had "only minimal contacts" with Giuliani and says none related to the events that are at the center of the inquiry. While she said she didn't know Giuliani's motives for attacking her, she said, "Individuals who have been named in the press contacts of Mr. Giuliani may well have believed that their personal financial ambitions were stymied by our anti-corruption policy in Ukraine."

Trump referred to Yovanovitch as "bad news" to Zelenskiy in the White House account of the conversation released last month.

Yovanovitch pushed back, in her prepared testimony, to the allegation she was "disloyal to Trump," saying those claims were false. She also said she was not asked by the Obama administration to weigh in during the 2016 campaign to harm Trump, "not would I have taken any such steps if they had."

She also told the committees she never met Hunter Biden, and while she had met Joe Biden, he never raised his son or his business interests with her.

An attorney for Sondland said in a statement that he has "at all times acted with integrity and in the interests of the United States. He has no agenda apart from answering the Committees' questions fully and truthfully."

The statement noted, however, that Sondland will not release documents that Congress is requesting, and that it's up to the State Department to do so.

"By federal law and regulation, the State Department has sole authority to produce such documents," per the statement, "and Ambassador Sondland hopes the materials will be shared with the Committees in advance of his Thursday testimony."

Sondland flew from Brussels to Washington to voluntarily answer questions about text messages between him and the senior diplomat at the U.S. Embassy in Ukraine, Bill Taylor, about whether military assistance was being conditioned on investigations related to political campaigns.

Earlier this week, White House counsel Pat Cipollone sent a letter to House Speaker Nancy Pelosi, D-Calif., and the chairs of the three committees saying the administration would not cooperate with document or testimony requests, arguing that the inquiry "lacks any legitimate constitutional foundation" and is simply an effort to "nullify the outcome of the democratic process" by reversing the results of the 2016 election and influence the upcoming 2020 election.

The whistleblower complaint released Sept. 26 says that Yovanovitch had criticized a former Ukrainian prosecutor's "poor record on fighting corruption." The same prosecutor, Yuriy Lutsenko, spread rumors about the Biden family and about Ukraine's "purported involvement in the 2016 U.S. election," as the whistleblower notes.

Lutsenko accused Yovanovitch of obstructing Ukrainian investigations and providing the U.S. with "evidence" of wrongdoing.

The whistleblower added that Lutsenko "later walked back" many of his allegations.

Despite that, the whistleblower cites reports that Giuliani met with Lutsenko twice, once in New York and once in Warsaw, Poland, earlier this year. Trump himself, as the whistleblower also notes, called Lutsenko's allegations "big" and "incredible" on Fox News and said "that the attorney general 'would want to see this.' "

Yovanovitch noted in her testimony on Friday that these claims were "completely false — a story that Mr. Lutsenko, himself, has since retracted."