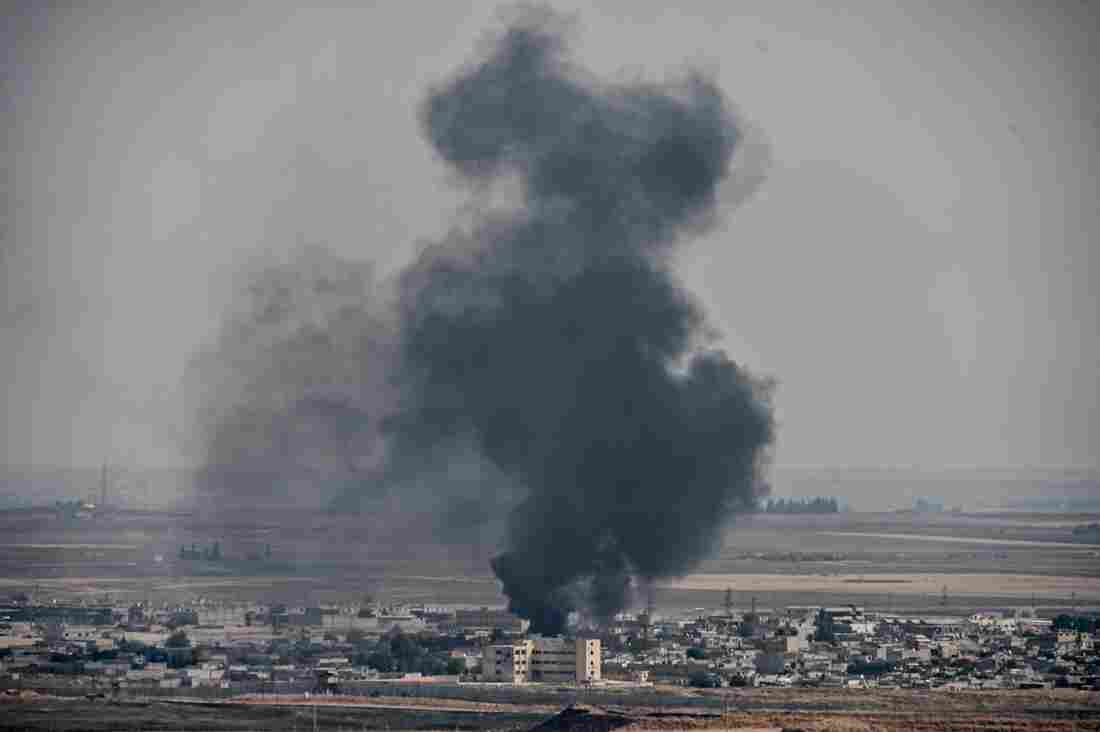 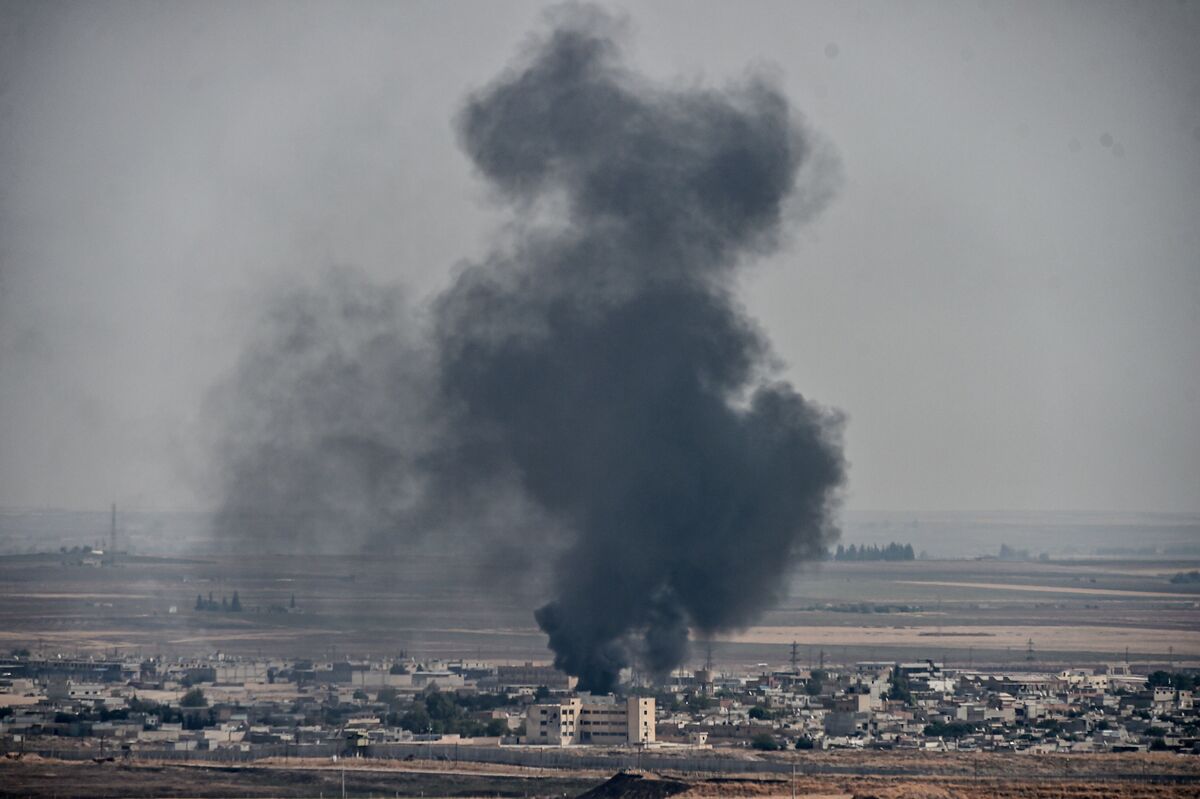 Smoke rises from the Syrian town of Ras al-Ain on Friday amid Turkey's military operation against Kurdish forces.

U.S. troops in the vicinity of Kobani, Syria, came under artillery fire from Turkish positions Friday, according to a Pentagon spokesman.

"The explosion occurred within a few hundred meters of a location outside the Security Mechanism zone and in an area known by the Turks to have U.S. forces present," Navy Capt. Brook DeWalt said in a statement. "All U.S. troops are accounted for with no injuries. U.S. Forces have not withdrawn from Kobani."

Earlier a U.S. official had told NPR's Tom Bowman that American forces had "departed that outpost" because the Turkish strikes were "too close for comfort," and the troops "may go back tomorrow."

U.S. defense officials have decried Turkey's incursion into Kurdish-dominated northern Syria, several days after President Trump cleared the way for the attack by withdrawing U.S. forces from the border.

DeWalt's statement said, "The U.S. demands that Turkey avoid actions [in areas where U.S. forces are present] that could result in immediate defensive action."

Kobani is located very close to the Turkish border, about 40 miles east of where Turkish attacks had been focused. One U.S. official tells NPR it is "the heart of the Kurds."

Esper said he has spoken to Turkey's defense minister "and reiterated the damage this is doing to our bilateral relationship."

The U.N. warns that at least 100,000 people have been displaced since the incursion began two days ago. Christian Cardon de Lichtbuer from the International Committee of the Red Cross says, "We have there all the ingredients for unfortunately yet another humanitarian crisis in Syria."

The U.N. says that at least seven civilians have been killed in the first two days of the Turkish operation.

The Turkish offensive is targeting Kurdish-led forces who have fought alongside the U.S. in its offensive against ISIS. These forces are at odds with Turkey, which says they are linked to militant organizations that stage attacks against the Turkish government.

Late Sunday, following a call between Trump and Turkish President Recep Tayyip Erdogan, the White House said that "Turkey will soon be moving forward with its long-planned operation in northern Syria." Turkey began its operation on Wednesday, aiming to clear a buffer zone of Kurdish forces.

The operation has garnered widespread criticism, even from a confidant of Trump's. Jack Keane, a retired four-star general and informal adviser to the president, told NPR that it "is a strategic blunder of significant consequence to permit Erdogan to use military force to establish a buffer zone."

Keane says that he believes most of Trump's national security advisers "were surprised by this decision and clearly believe that we still should be supporting the Syrian Kurds and getting back to the negotiating table with Turkey on what size the buffer zone should be."

He added that "Erdogan told [Trump] that he fully intended to conduct operations to clear that buffer zone to the depth that he wanted to have it." The Kurdish fighters impacted, Keane said, are "as much of an ally [as] we have had in any war that we've ever fought."

A U.S. official told NPR that he considers this the U.S. military's "moral and ethical dilemma of the current generation."

"Standing by while a faithful partner is hunted down by a NATO country after the partner stood by us against ISIS. Completely absurd & avoidable," he said in a text. "Responsibility lays not just with those who act, but also with failure to act - to prevent. Our leaders know this and remain silent."

Esper denied that the U.S. had greenlighted the Turkish operation. "We pushed back very hard at all levels for Turkey not to commence the operation," he said, and had relocated fewer than 50 U.S. special operations soldiers out of the immediate area.

These troops, and Kurdish-allied forces, had been holding ISIS militants. The U.S. has said that these detainees are now Turkey's responsibility, though Esper said that two high-profile militants who were involved in the kidnapping and murder of U.S. and U.K. citizens in Syria have been transferred to U.S. custody.

On Friday, the Treasury announced that it was prepared to impose sanctions on Turkish government agencies and officials "to dissuade Turkey from any further offensive military action in northeast Syria."

"We are putting financial institutions on notice that they should be careful and that there could be sanctions," U.S. Treasury Secretary Steven Mnuchin said, according to Reuters.