Accessibility links
As An Election Nears In Poland, Church And State Are A Popular Combination Poland's ruling Law and Justice Party leads its opposition in opinion polls ahead of Sunday's election. "Christianity is part of our national identity," party leader Jaroslaw Kaczynski said recently.

As An Election Nears In Poland, Church And State Are A Popular Combination

As An Election Nears In Poland, Church And State Are A Popular Combination 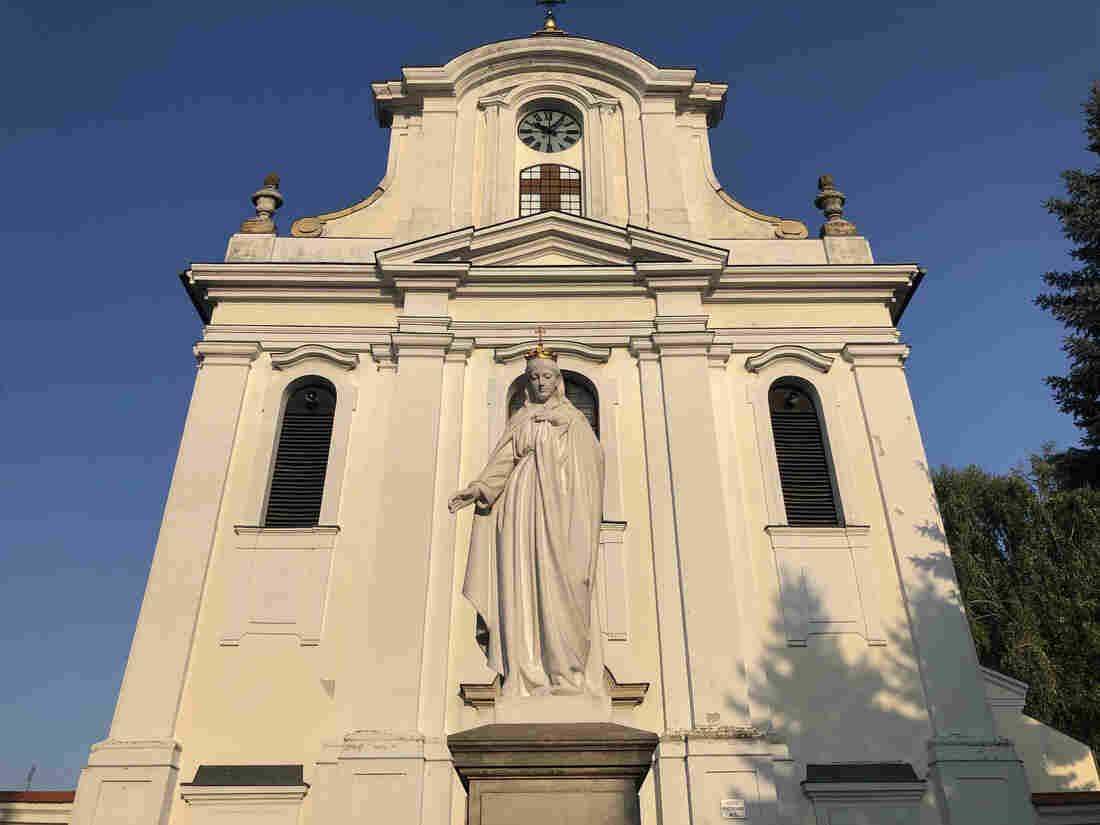 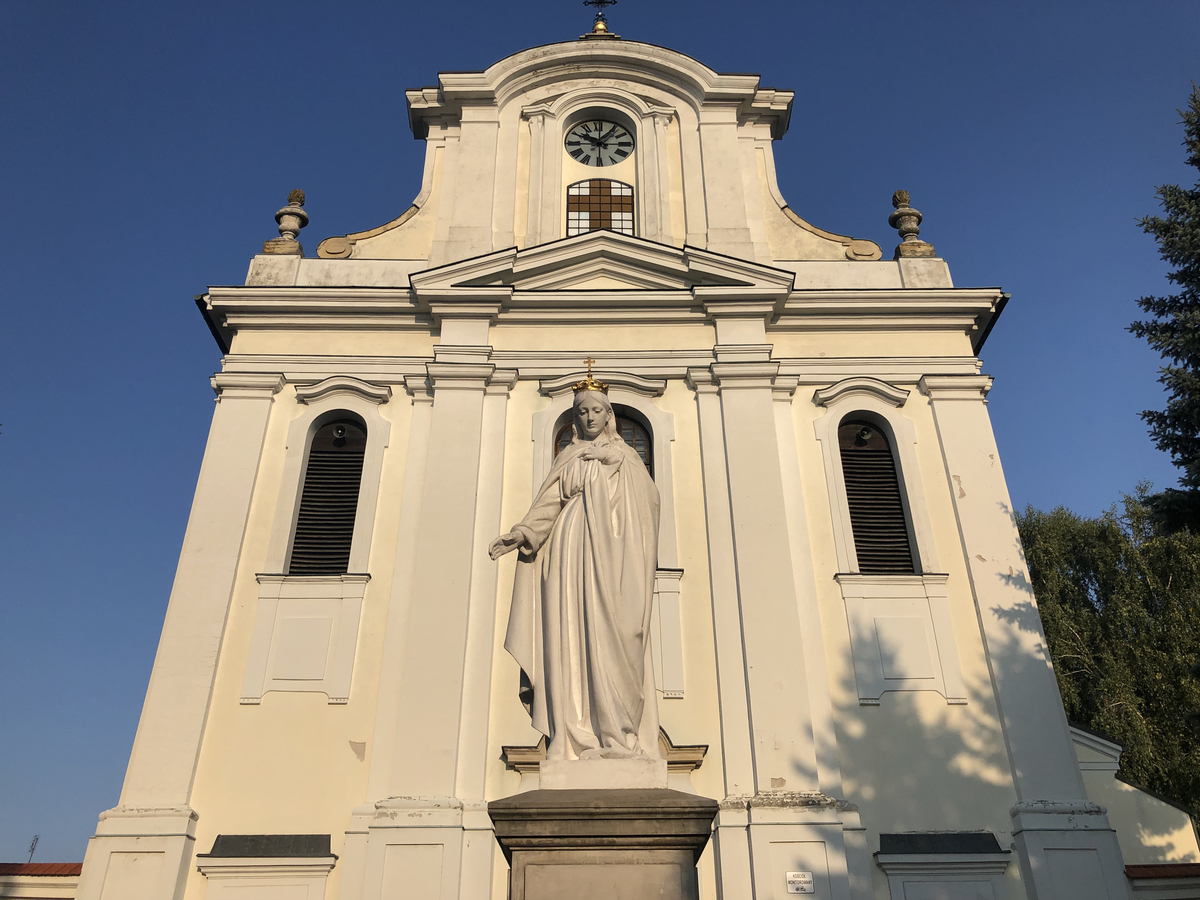 Gora Kalwaria's Immaculate Conception Church stands in the center of the small town outside Warsaw.

As the bells of evening Mass begin to ring, Kazimiera Sokolowska carefully makes her way up the steps to the Immaculate Conception Church in her hometown of Gora Kalwaria, Poland, in the heart of a bucolic river valley an hour outside of the capital of Warsaw. She attends Mass at least three times a week because, she says, that's what Poles do.

"Being Polish means religion, God, children and family," she says with a warm smile.

The 80-year-old accountant has lived through war, Soviet ruler Josef Stalin — "we praised him endlessly when we were young," she says — and the end of Communism. Through it all, Poland's Roman Catholic Church has stood by the people, Sokolowska says. Now, she says the nation's government is standing by the people and the church.

"I normally don't talk about politics, but I think it's good we have a government that represents our religious convictions and that's also concerned for the common man," she says.

Poland's ruling Law and Justice Party leads its opposition by almost 20 points in opinion polls ahead of the country's Oct. 13 election. At a time when neighboring economies are slowing, Law and Justice has overseen one of the fastest-growing economies in Europe, making Poland a role model of a successful conservative and nationalist state for other small Eastern European nations.

It's also one of the continent's most traditional political parties: in a country where 9 in 10 citizens are Catholic — one-third of them who regularly attend church — what the party calls its "pro-family" social agenda is popular. 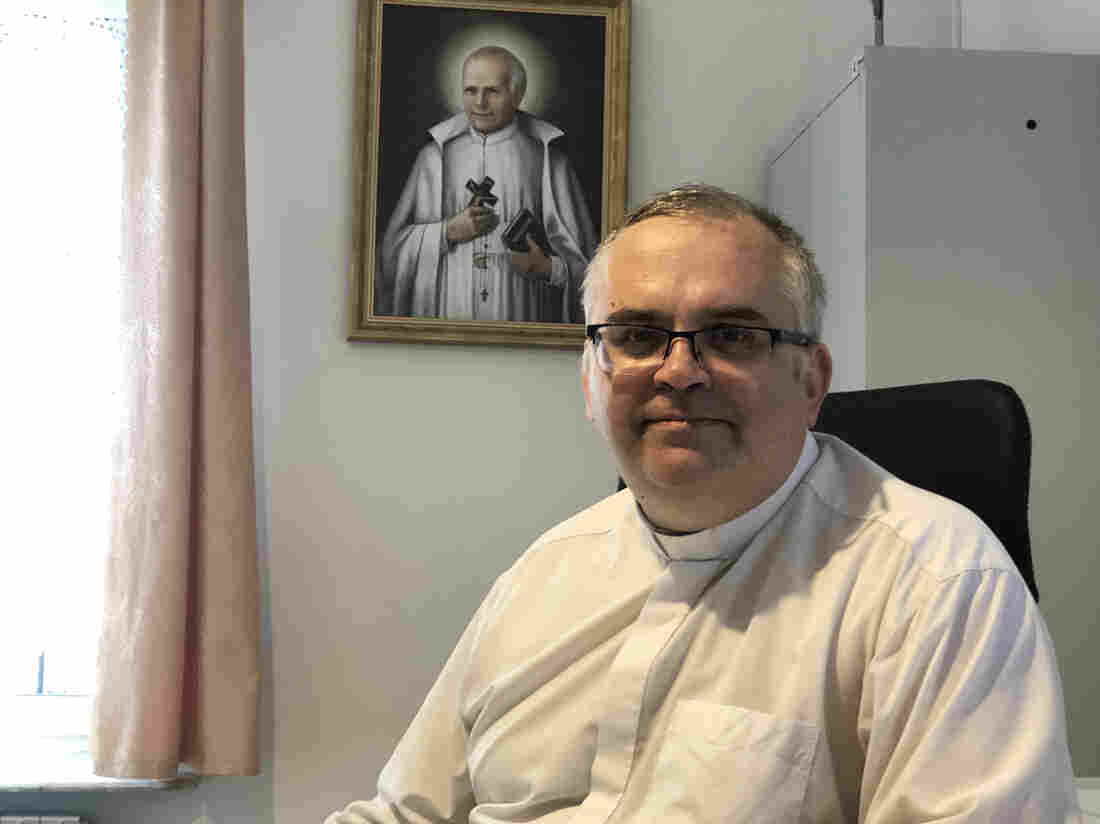 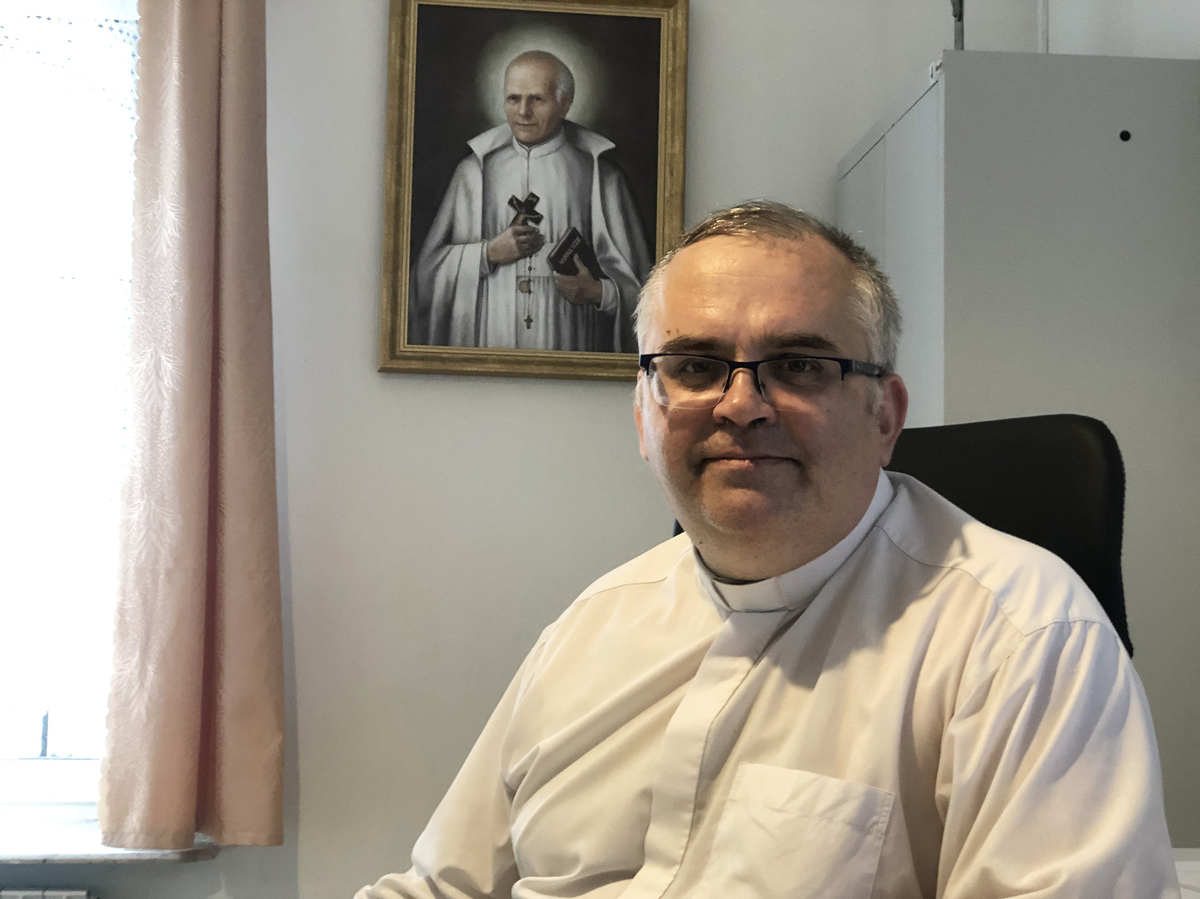 "Those are the values tested over many centuries, and those are values that not only lead to God but also integrate families," says Gora Kalwaria parish priest Andrzej Jerominek.

The bespectacled cleric sits at a desk in a rectory office beside the Immaculate Conception Church. Anti-abortion posters depicting the various stages of a human fetus adorn the walls. To one side hangs a picture of Pope John Paul II, a national hero.

Jerominek says the Catholic Church played a leading role in enabling Poland to regain independence a century ago, fend off near-annihilation during World War II and withstand decades of Communist rule.

"For several decades that atrocious ideology was baneful to us all," he says of Communism, "because it was an atheistic ideology that took people away from God. Nowadays, we don't want new ideologies because we experienced in our own skin what they truly are: dressed in the feathers of humanistic values, but behind them, there exists great harm for each human." 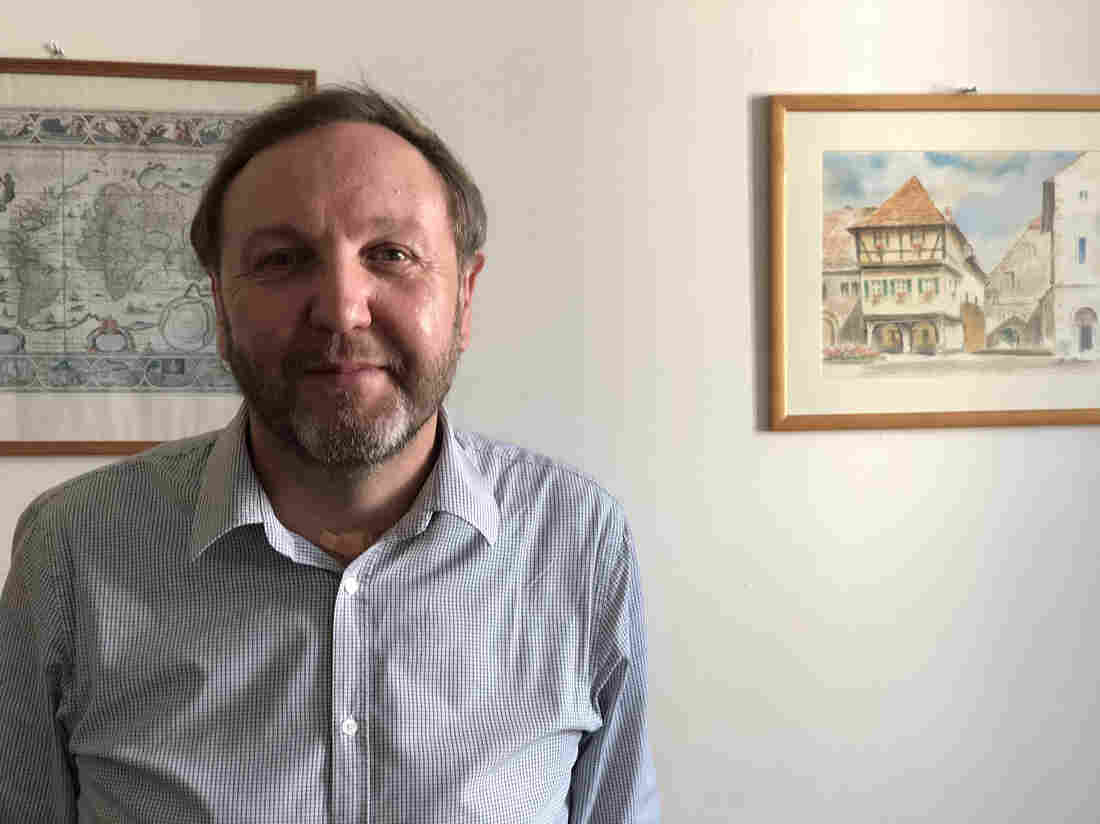 Jacek Kucharczyk, president of the Institute of Public Affairs, one of Poland's largest think tanks, says priests throughout rural Poland encourage parishioners to vote for the Law and Justice Party. In return, Kucharczyk says, the party protects the church. Rob Schmitz/NPR hide caption 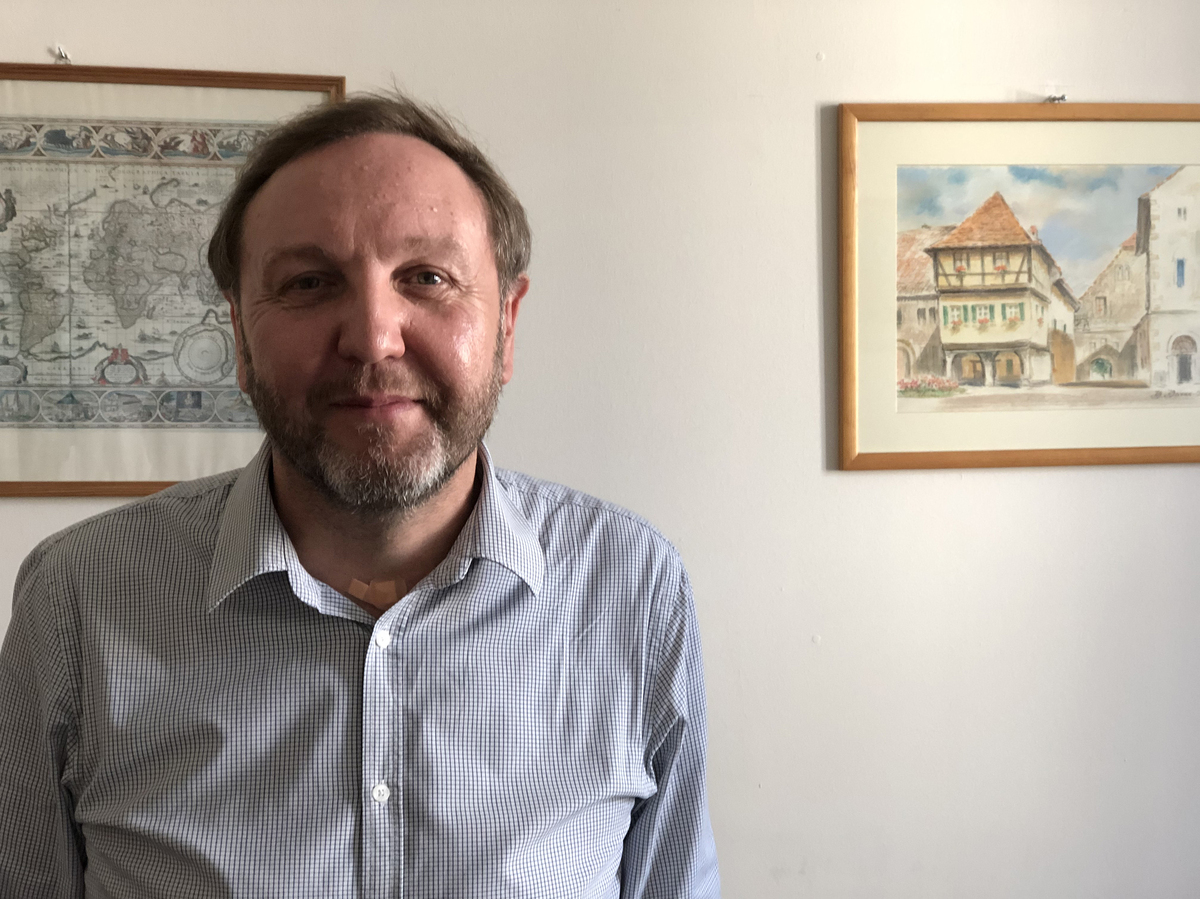 Jacek Kucharczyk, president of the Institute of Public Affairs, one of Poland's largest think tanks, says priests throughout rural Poland encourage parishioners to vote for the Law and Justice Party. In return, Kucharczyk says, the party protects the church.

Jerominek says "novelties" like LGBT rights and what he calls "gender ideology" remind him of Communism, too. "The ruling party is protecting us from all of that," he says. "It's a very good government."

The Law and Justice Party was founded in 2001 by former Prime Minister Jaroslaw Kaczynski and his identical twin brother, Lech Kaczynski, who died in a plane crash in 2010 while serving as Poland's president.

Both were pro-democracy leaders decades ago under Communist rule. The party won Poland's last parliamentary elections in 2015 with an outright majority, a feat no party has done since the fall of Communism in 1989. The party's message — that people haven't benefited enough from the country's post-Communist economic liberalization and integration into the European Union — has appealed to a working class that feels economically left behind from the rest of the EU and whose guidance typically comes from their local priest.

"Christianity is part of our national identity, the [Catholic] Church was and is the preacher and holder of the only commonly held system of values in Poland," said Kaczynski, the former prime minister, at a recent political convention. "Outside of it... we have only nihilism."

But Poland is in the midst of a social change as educated urbanites break away from their Catholic upbringing. "The political impact of the church is rather limited in big cities. In small areas, they are all-powerful. They shape politics as they like," says Jacek Kucharczyk, president of the Institute of Public Affairs, one of Poland's largest think tanks.

Kucharczyk says priests throughout Poland's countryside encourage parishioners to vote for the Law and Justice Party; in return, he says, the party protects the church. "As long as we are in power, you have nothing to be afraid of," he says of the nature of the relationship between the party and the church. "There won't be investigations into pedophilia, there won't be any change in your privileged position in public institutions such as public schools and so on and so forth."

On the streets of Warsaw, many people are frustrated with other aspects of the party's rule, especially its move to grant lawmakers more power over appointing judges, threatening the courts' independence. "I don't approve of what's been done to the judiciary," says retiree Blanka Radomska. "I don't approve of the gall, the arrogance in every area. I'm afraid that if it continues this way, they'll get their hands on the media, too."

On Thursday, the European Commission referred Poland to the top European court over concerns that new laws strip judges of their independence. Investigations and even sanctions are expected to follow.

Adding to international concern, in a 232-page party manifesto published in preparation for this month's election, the Law and Justice Party outlined new rules for Polish journalists that would create a "self-government" body to ensure "ethical and professional standards among journalists." Human rights advocates have called the new rules "an assault on democracy."

The Institute of Public Affairs' Kucharczyk says a strong economy has helped Law and Justice stay in power for four years. The party's nationalist, populist message has appealed to other Eastern European countries where a resurgence of nationalism has catapulted other nationalist parties into power. But he says for Law and Justice, the upcoming election poses an existential threat.

"These people have done so many things in the four years in power that they will likely face legal actions if they lose power, so it's make or break for them, they have everything to lose," he says. Law and Justice politicians have been caught in corruption scandals in the past year. Poland's Parliament speaker resigned for using government aircraft for private trips.

But these scandals haven't dented party popularity and losing seems unlikely. As Kucharczyk says, as long as the economy steadily grows under its rule, many of the country's voters will likely continue to throw their support behind Law and Justice.

Grzegorz Sokol contributed to this story in Gora Kalwaria and Warsaw, Poland.