Accessibility links
Democratic Primary Debate: Will Democrats Go After Joe And Hunter Biden? The last couple of weeks have been dominated by the congressional impeachment inquiry into President Trump. But Democratic presidential candidates will take center stage again this week.

7 Questions Ahead Of The Next Democratic Primary Debate

7 Questions Ahead Of The Next Democratic Primary Debate 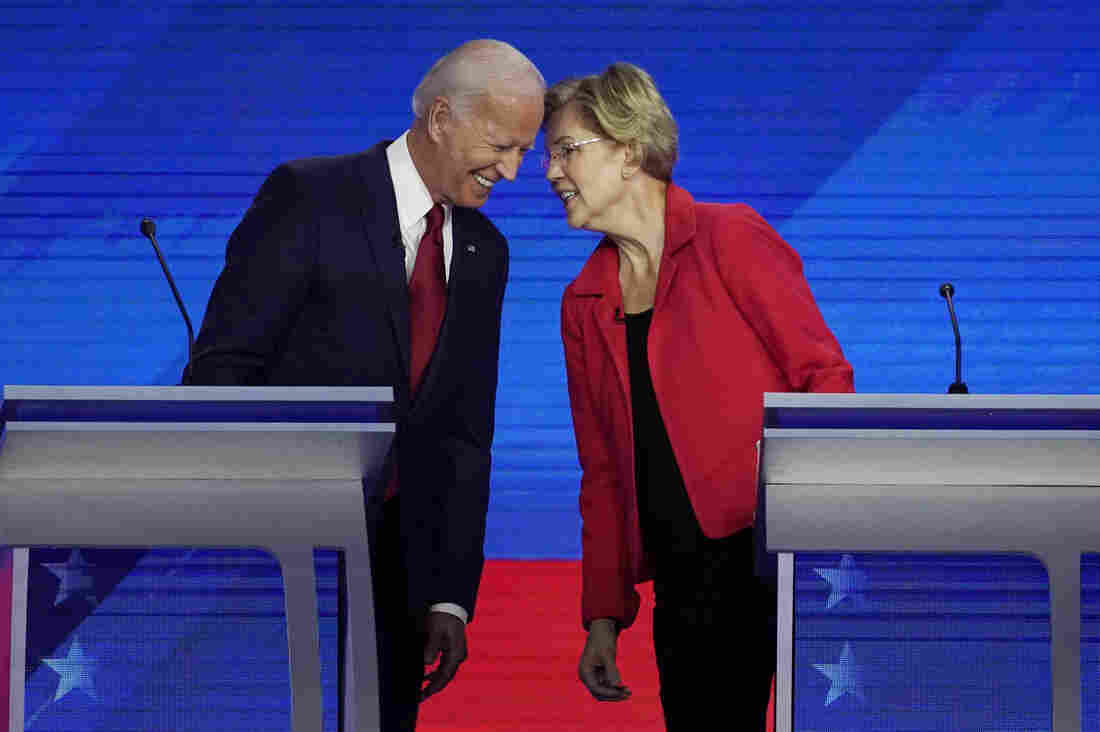 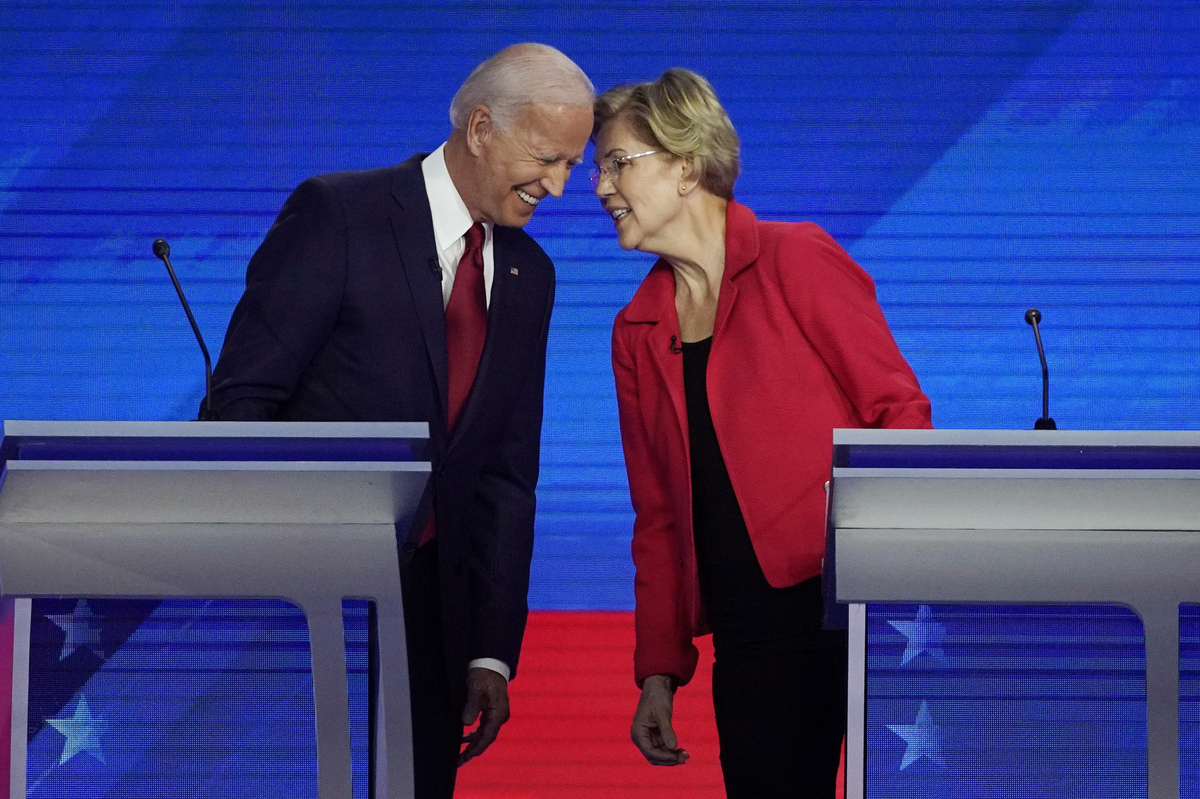 The focus of the last two weeks has been President Trump and the congressional impeachment inquiry. But next week, Democrats running for president will take center stage again.

A dozen candidates, the most so far on one stage, will gather Tuesday for the fourth primary debate in Westerville, Ohio, at Otterbein University. The debate, which is sponsored by CNN and The New York Times, will air on CNN at 8 p.m. ET and will also be simulcast on local NPR stations.

With less than four months until the first votes are cast, the scrutiny is going to become sharper and there are lots of questions facing the candidates as they head into primary crunch time.

1. Do any of the candidates go after Joe and Hunter Biden?

There is no evidence to the conspiracies (that we won't repeat in this space) President Trump is promulgating about Joe Biden and his son Hunter.

But there is a legitimate question as to whether it was appropriate for Hunter Biden to seemingly cash in on his father's name and serve on the board of a Ukrainian gas company when his vice president father was the point man for the country in the Obama administration.

Most of the candidates will probably say that even dignifying that with an answer is playing into Trump's hands. But Elizabeth Warren struggled when she was asked about it, at first saying, no, she wouldn't let her vice president's child do that, before quickly backtracking and saying she didn't know. It's not outside the realm of possibility that she will be asked to clarify. And will every single of the dozen candidates on the stage not answer the question, especially when they are looking to take Biden down a couple notches — or get him out altogether?

Biden apparently sees the need to respond more forcefully to the ethical questions. On Sunday, Hunter Biden announced he was stepping down from a board position with a Chinese-backed equity firm and pledged not to work for any foreign-owned companies if his father is elected. Moreover, the Biden campaign released a broad government ethics plan on Monday, trying to turn the argument back on President Trump for taxpayer money spent at his properties and other allegations of impropriety.

The NPR/PBS NewsHour/Marist poll has shown Biden vulnerable to the attack. By a 50%-28% margin, Americans said they think his being brought into the Ukraine controversy will hurt him, and his favorability rating ticked down slightly in the past two weeks since the controversy began bubbling. Still, more than 70% of Democrats have a favorable view of Biden, meaning any attack on him could be political murder-suicide in a primary.

2. Does Elizabeth Warren face new scrutiny and how does she handle it?

Just like that, Biden is no longer the front-runner in the polls. Biden and Warren are now co-front-runners. This past week, Warren caught Biden in an average of the polls after her steady rise through the summer. Given that status, do moderators pose more pointed questions to Warren around things like the cost of her sweeping — and liberal — plans?

Warren has shown tremendous facility as a candidate, and, so far, other vulnerabilities haven't hurt her in the primary, including Trump's "Pocahontas" attack and her botched DNA test rollout.

Perhaps as evidence of her rise, she has faced new scrutiny for her story of losing a teaching job because she was pregnant.

This was 1971, years before Congress outlawed pregnancy discrimination—but we know it still happens in subtle and not-so-subtle ways. We can fight back by telling our stories. I tell mine on the campaign trail, and I hope to hear yours.

If her rise continues, expect there to be more turning over of stones of her record and biography.

Does that begin at this debate?

3. How does Sanders do, given that this is his first debate since having a heart attack? 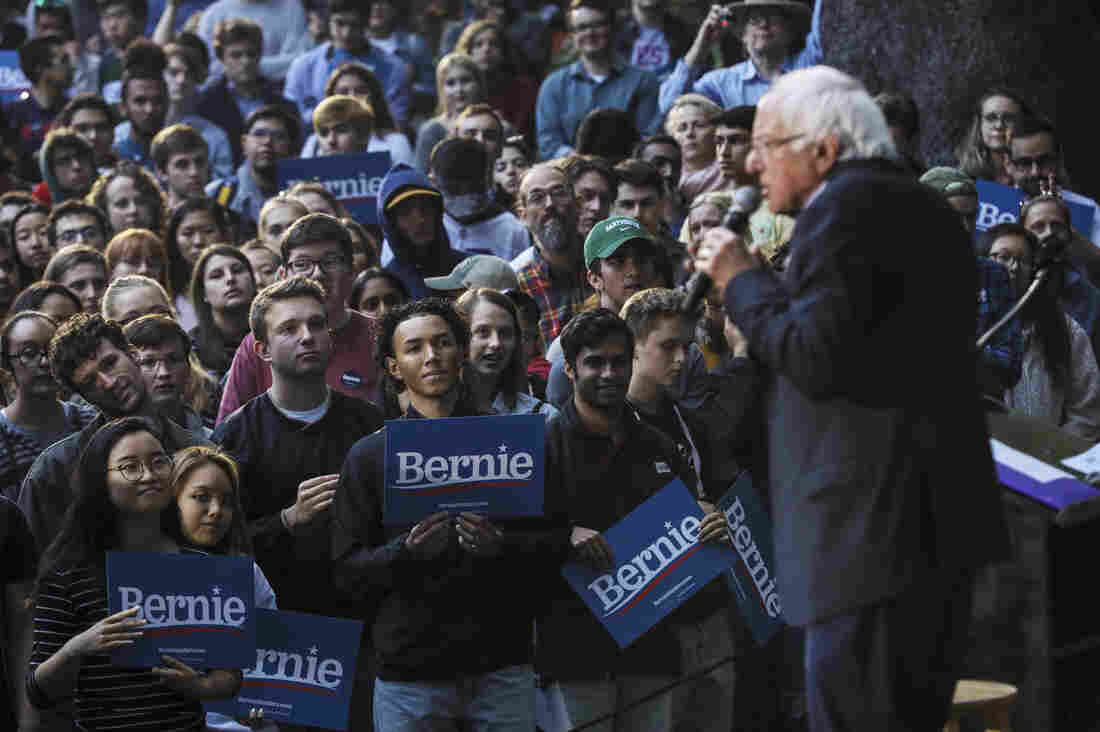 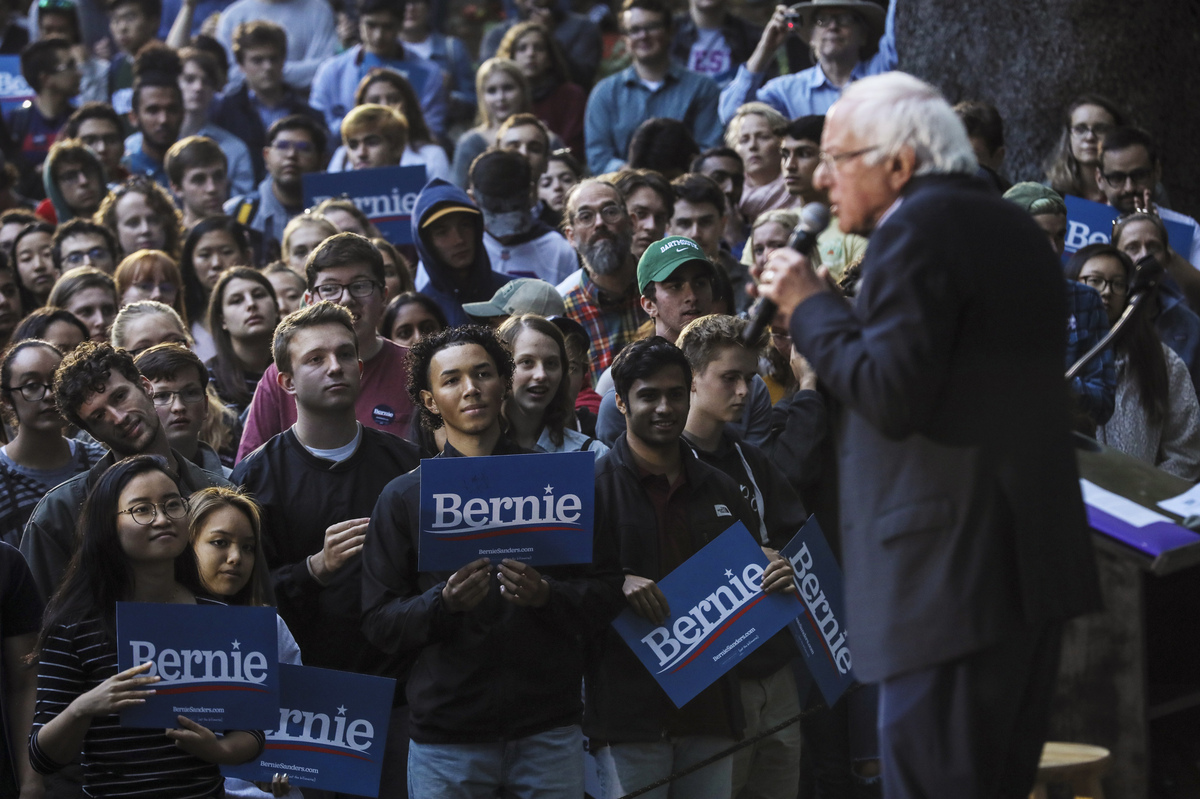 It's not every day that a candidate has a heart attack and continues to campaign. But that's what happened to Bernie Sanders, the Vermont independent, since the last Democratic debate. It brings to the fore one of the latent issues of the campaign — age.

Sanders has had no record of heart attack before this episode, but he is 78. He's the oldest candidate in the race, followed by Biden who is 76; Warren is also a septuagenarian at 70. It's somewhat taboo to talk about, but it's real — and some of the candidates have tried to, subtly, make an issue of it. Rep. Eric Swalwell, before dropping out, told Biden he needed to "pass the torch," and Julián Castro, the former Obama housing secretary, accused Biden of "forgetting" something he said earlier in the debate.

Sanders is someone who has campaigned vigorously and enthusiastically, and he's going to have to show he can return to the form voters have come to expect. 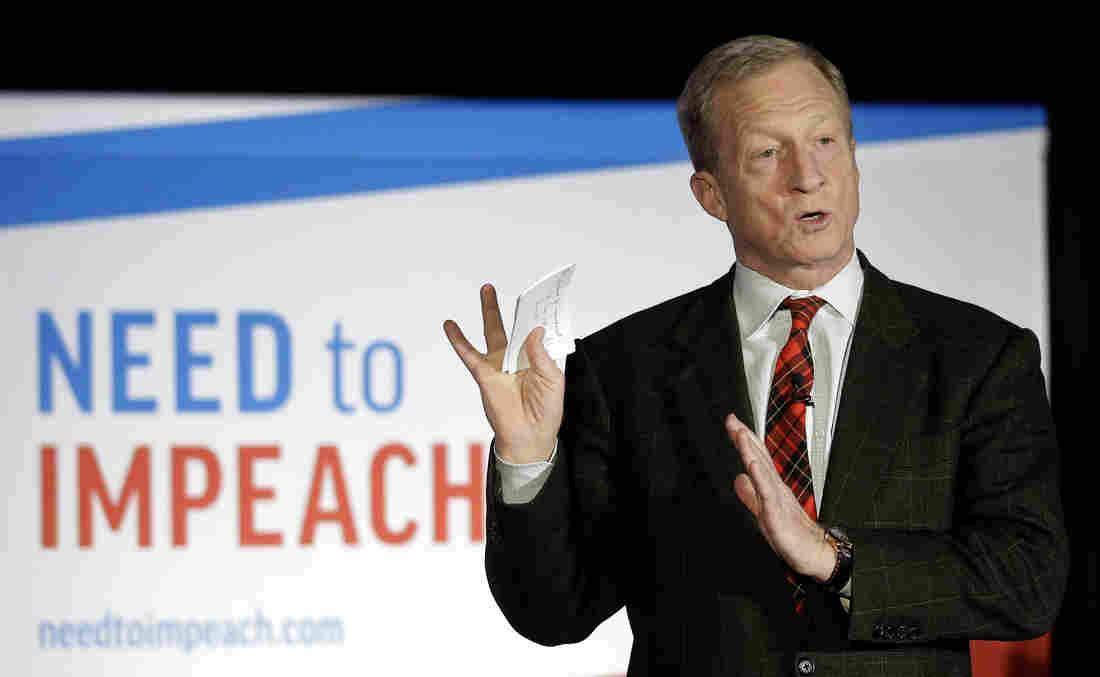 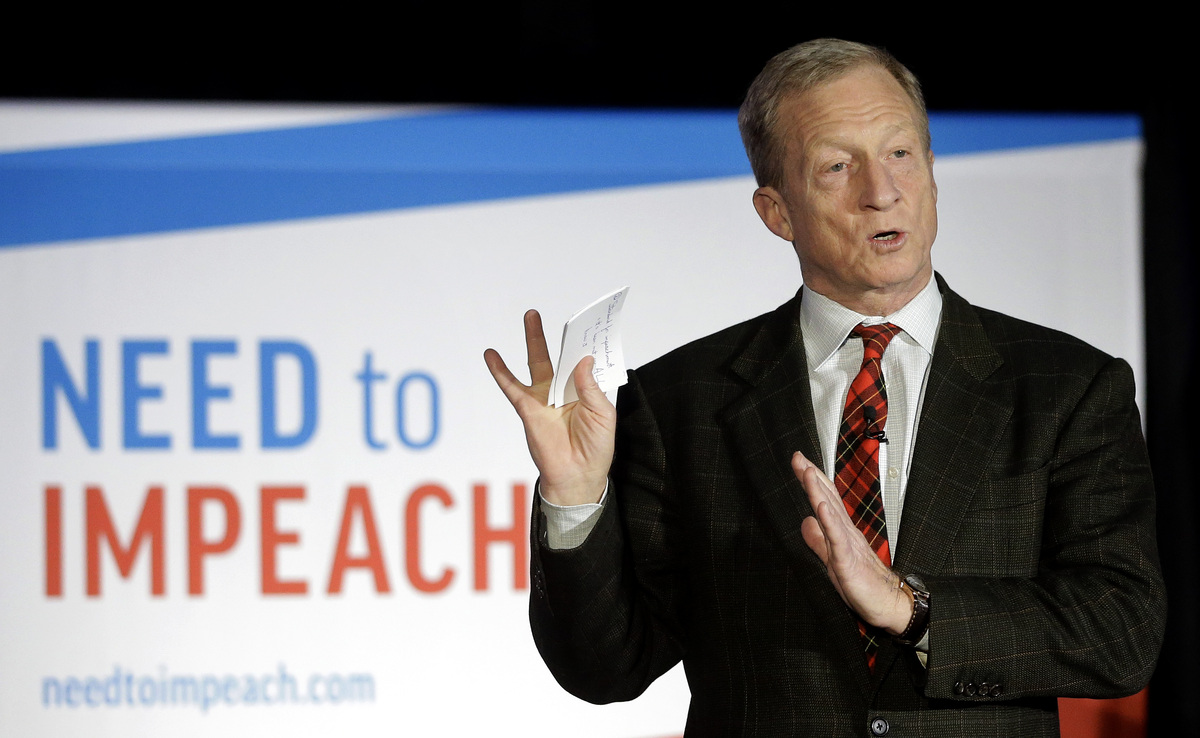 The newest face to the debate stage is Tom Steyer. The California billionaire investor — and political novice — made a name for himself with his climate activism and his multi-million-dollar campaign supporting President Trump's impeachment. So how does he do, especially now that impeachment is all the rage in the Democratic Party?

One thing to watch for: Does he become a target, a useful foil for the populists onstage. After all, he is a billionaire, and some in the race have accused him of buying his way onto the debate stage. By the way, Steyer has already qualified for the November debate, so you will see him again.

5. How do the candidates handle impeachment?

The NPR/PBS NewsHour/Marist poll out this week showed that while a slim majority are now in favor of the impeachment inquiry, 58% would prefer to see Trump's fate decided at the ballot box rather than through the impeachment process (37%).

That presents a challenge for the Democrats onstage. Democratic voters are hungry to impeach Trump, but the general public is a more reticent.

So will the candidates carefully walk the line to keep the majority who now say they favor the impeachment inquiry — or not?

6. Do the candidates play to the middle at all?

One worry from veteran Democratic strategists about this field is just how liberal the candidates are. Forget Bill Clinton's party, this isn't even Barack Obama's party. Sure, Democrats have a deep well of fondness for Obama, but many in the base feel, in the age of Trump, Obama's caution and aspirations of unity are naïve.

They want a fighter — and someone who will be able to deliver a vision of what they see as justice, not incremental progress. That's all well and good, but strategists are biting their nails over what they see as a potential blown opportunity in 2020. Trump is playing to the base, they say, leaving the persuadable voters he won in 2016 up for grabs.

After all, it has been that — albeit increasingly narrow — slice of persuadable voters who tend to decide presidential elections. The other theory of the case is: Because of that narrowing middle, it's most important to energize the base.

It is the fall, and more people are likely going to start tuning in to see what Democrats are offering. So what on their menu will dominate the narrative?

7. Is this really just a three-person race — or can someone else show they belong?

It's hard to deny the trend line. Biden, Warren and Sanders have consistently been the top three candidates for a very long time in this race.

Aside from a period in the spring and after the first debate in July when Kamala Harris got a bounce, no one — no one — has broken 10% in the polling average.

Even in the early states of Iowa, New Hampshire, South Carolina and Nevada, it's Biden, Warren, Sanders in varying order — with South Bend, Ind., Mayor Pete Buttigieg at 10% in New Hampshire. But that's it.

Of course, that could change, but that likely depends on whether the top three falter or how the candidates fare in these debates.

The last debate saw some candidates taking more risks in their lines of attack. Will that play out again this time, and what will they do exactly to get attention?