Accessibility links
Border Wall Rising In Arizona, Raises Concerns Among Conservationists, Native Tribes The Customs and Border Protection agency says it is doing its best to reduce impact to the environment and tribal citizens. Conservationists and Native Tribes in the area are not appeased. 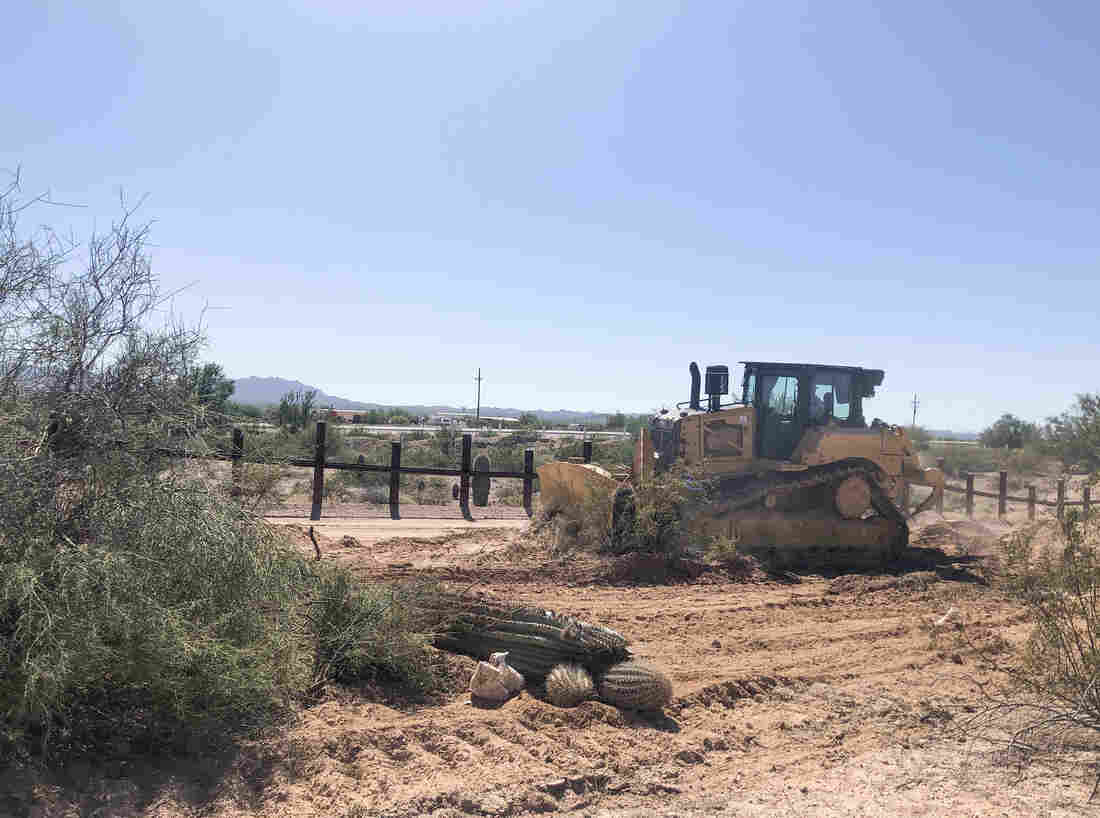 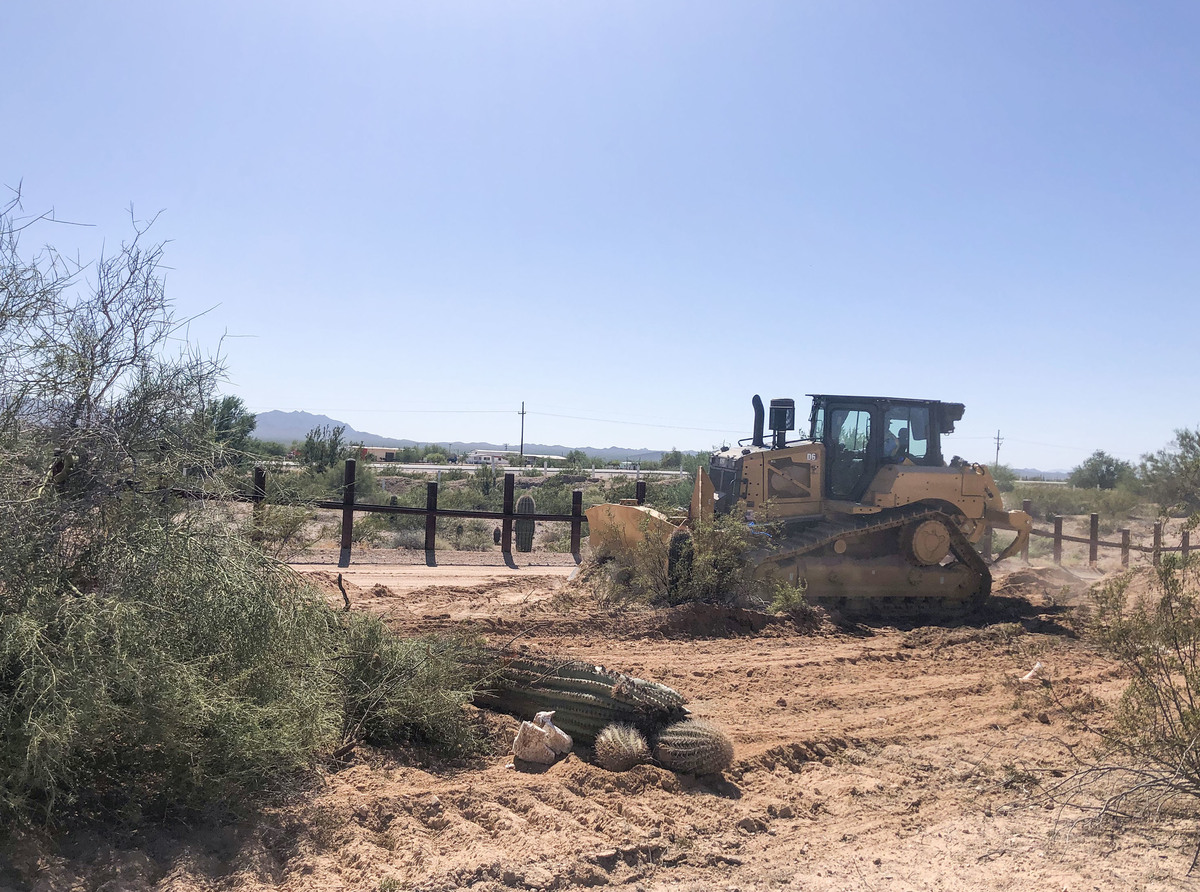 A contractor bulldozes a 60-foot-wide construction zone along the border, toppling saguaro cacti.

Construction has begun on President Trump's border wall between Arizona and Mexico, and conservationists are furious. The massive barrier will skirt one of the most beloved protected areas in the Southwest — Organ Pipe Cactus National Monument, recognized by the United Nations as an international biosphere reserve.

On a recent drive along the borderline, a crew was transplanting tall saguaro cactus out of the construction zone.

"There may be misconceptions that we are on a construction site and just not caring for the environment," intones a voice on a video released by the U.S. Army Corps of Engineers, which is overseeing the project. "We are relocating saguaro, organ pipe, ocotillo..."

But a half-mile away, a big yellow bulldozer was scraping the desert clean and mowing down cactus columns that were likely older than the young man operating the dozer.

Customs and Border Protection later said 110 desert plants have been relocated, and unhealthy ones get bulldozed.

This scene illustrates why environmentalists are deeply skeptical of the government's plans. They fear that as CBP and the Defense Department race to meet the president's deadline of 450 miles of wall by Election Day 2020, they will plow through one of the most biologically and culturally rich regions of the continental United States.

The U.S. Fish & Wildlife Service has warned that the wall, with its bright lights, human activity and impermeable barrier, could negatively impact 23 endangered and at-risk species, including the Sonoran pronghorn antelope. And the National Park Service says construction could destroy 22 archaeological sites. Yet, for this stretch of western desert, the government has waived 41 federal environmental laws to expedite construction.

"This is a wall to fulfill a campaign promise. It's really clear. And that's what makes so many of us so angry. It's being done so fast outside the rule of law and we know it'll have an incredible impact," says Kevin Dahl, Arizona representative for the National Parks Conservation Association. He sits beside a serene, spring-fed pond fringed by cattails, and dive-bombed by dragonflies. It is called Quitobaquito Springs, and it's located on the southern edge of the Organ Pipe Cactus National Monument. 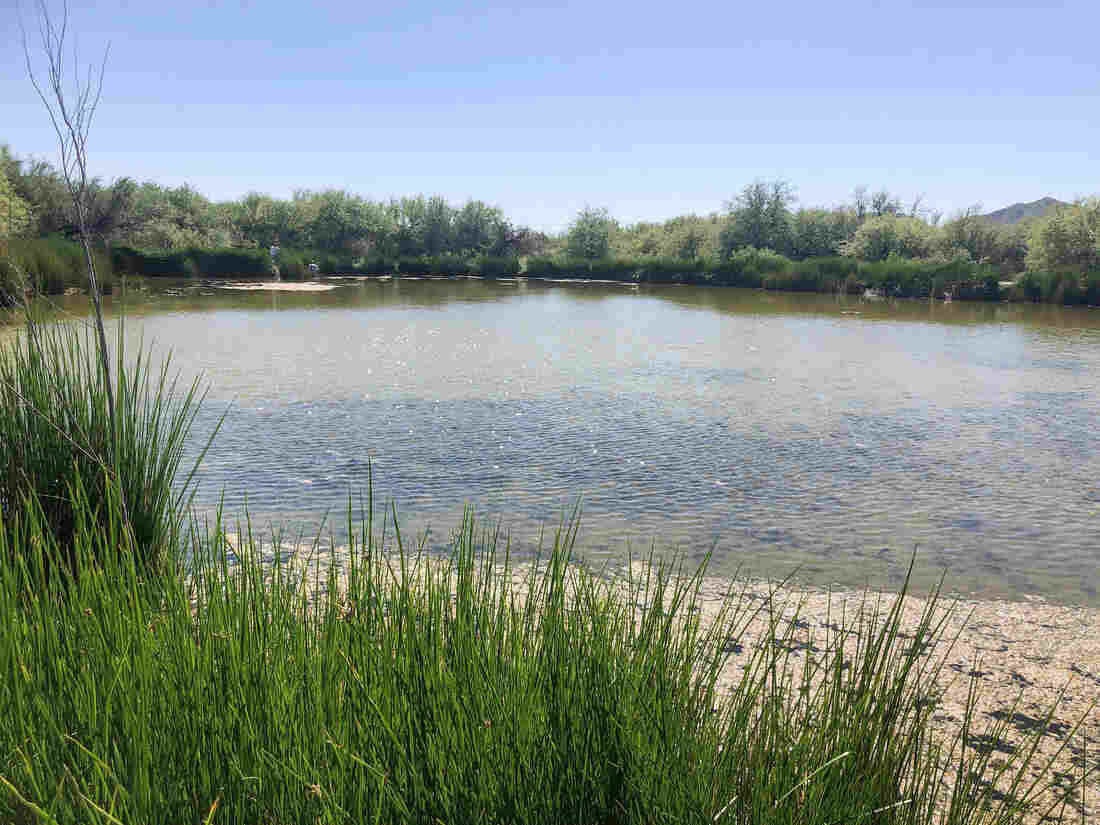 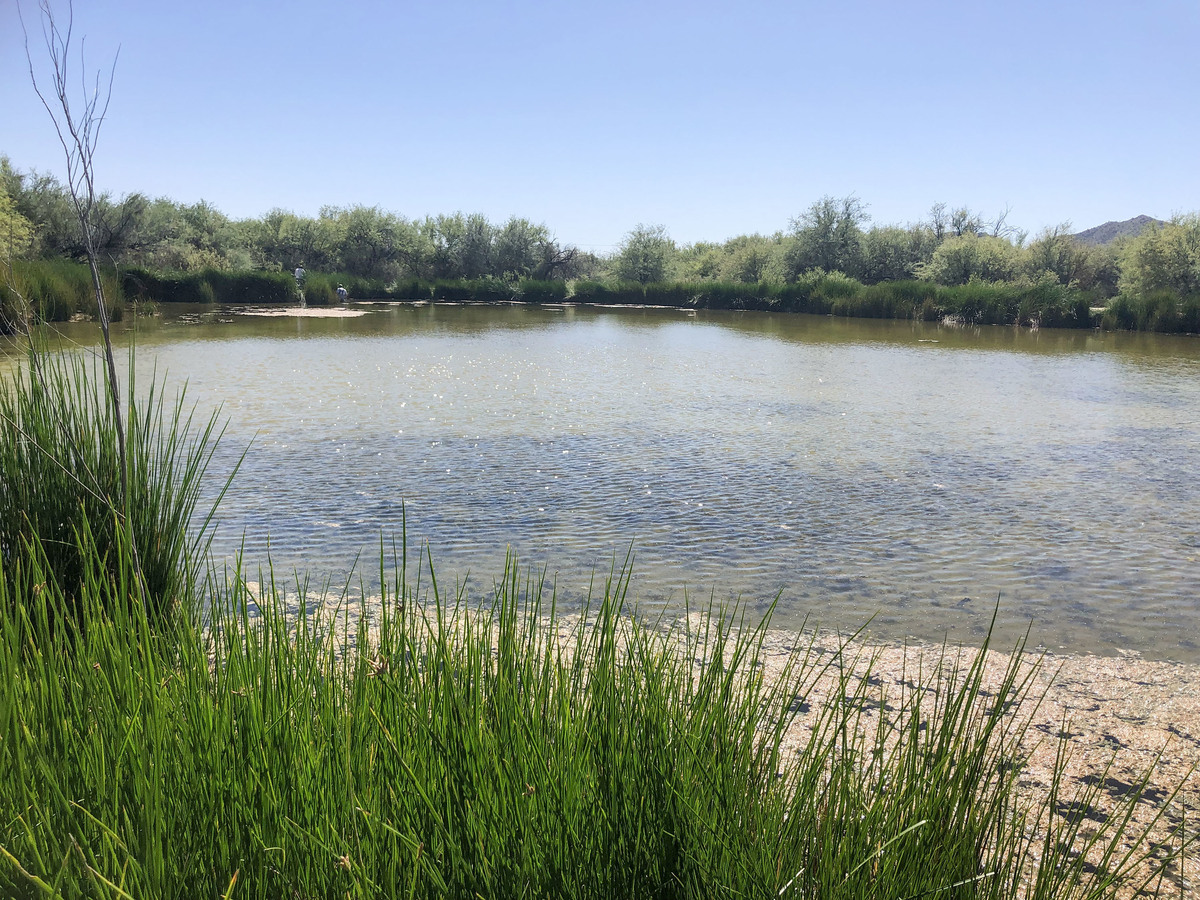 Quitobaquito Springs, inside the Organ Pipe Cactus National Monument, is listed by the United Nations as an international biosphere reserve.

A biologist peers into a rivulet that feeds this oasis in the middle of the Sonoran desert.

"These guys are very tiny, maybe half the size of a sesame seed. Those are the Quitobaquito tryonia. And there are literally thousands in here," says Jeff Sorensen, wildlife specialist supervisor with Arizona Game and Fish Department. He's an expert on this tiny snail, which is one of three species — along with a mud turtle and a pupfish — whose entire universe is this wetland.

The springs have been used for 16,000 years by Native Americans, followed by Spanish explorers, traders and farmers.

But the pond is a stone's throw from the international border, and the path of the wall. Conservationists fear workers will drill water wells to make concrete, and lower the water table which has been dropping for years.

"We do have concerns," Sorensen continues. "Our species that are at this site rely on water just like everything else here in the desert southwest. And to take that water away from them means less of a home."

The Trump administration is building 63 miles of wall in the Tucson Sector, to replace outdated pedestrian fences and vehicle barriers. CBP says this stretch of desert is a busy drug- and human-trafficking corridor. In 2019, the Tucson sector had 63,490 apprehensions and seized more than 61,900 pounds of illegal narcotics. The Defense Department is paying Southwest Valley Constructors, of Albuquerque, N.M., to erect 18- to 30-foot-tall, concrete-filled steel bollards, along with security lights and an all-weather patrol road. It will cost $10.3 million a mile.

The rampart is going up in the Roosevelt Reservation, a 60-foot-wide strip of federal land that runs along the U.S. side of the border in New Mexico, Arizona and California. It was established in 1907 by President Theodore Roosevelt.

Congress refused to authorize money for construction of the wall in Arizona. Under Trump's national emergency declaration, the Defense Department has reprogrammed counterdrug funding to build the border wall.

In responses to questions from NPR, CBP says contractors will not drill for water within five miles of Quitobaquito Springs. The agency says it is coordinating with the National Park Service, Fish & Wildlife and other stakeholders to identify sensitive areas "to develop avoidance or mitigation measures to eliminate or reduce impacts to the environment." Additionally, CBP is preparing an Environmental Stewardship Plan for the construction project.

Critics are not appeased.

"There is a whole new level of recklessness we're seeing under Trump. We thought Bush was bad, but this is a whole other order of magnitude," says Laiken Jordahl, a former national park ranger and now borderlands campaigner with the Center for Biological Diversity.

There was an outcry, too, back in the late 2000s when President George W. Bush built the first generation of bollard wall. Those barriers topped out at 18 feet. The structures rising southwest of Tucson are as tall as a two-story building. They look like they could hold back a herd of T-rexes. 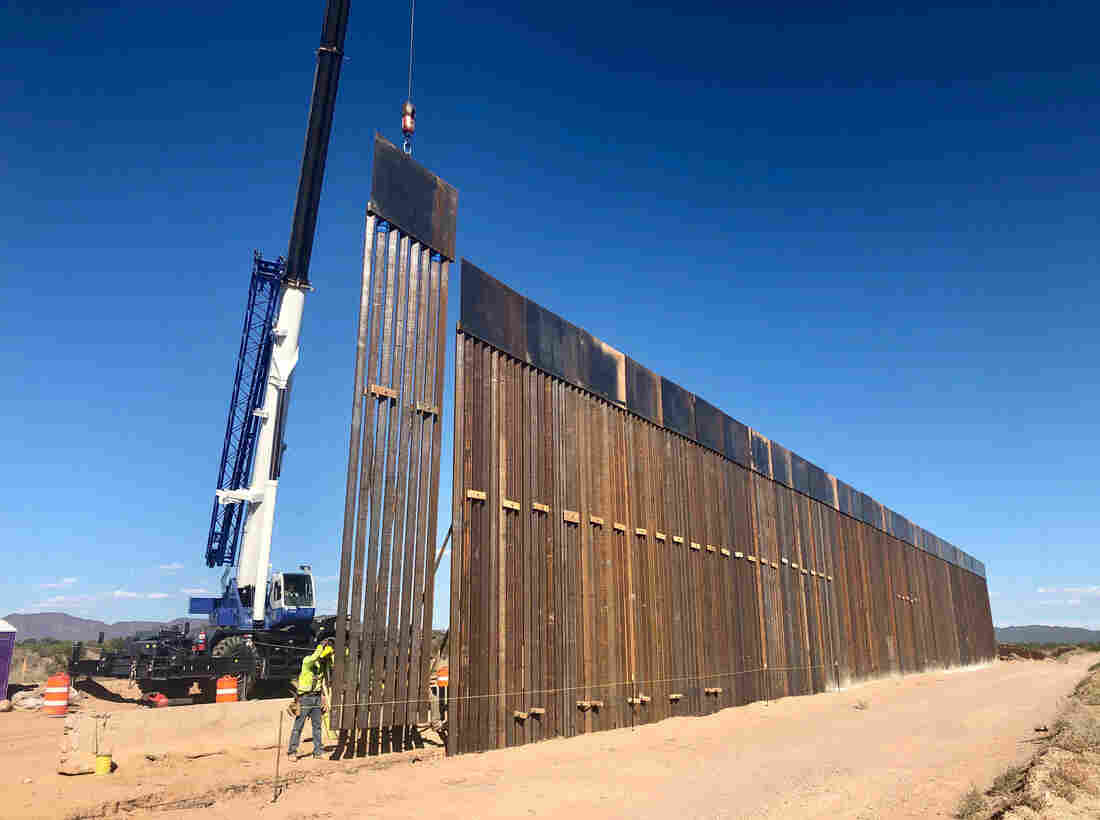 A 30-foot border barrier — as tall as a two-story building — rises from the desert near Lukeville, Ariz. Laiken Jordahl /Center for Biological Diversity hide caption 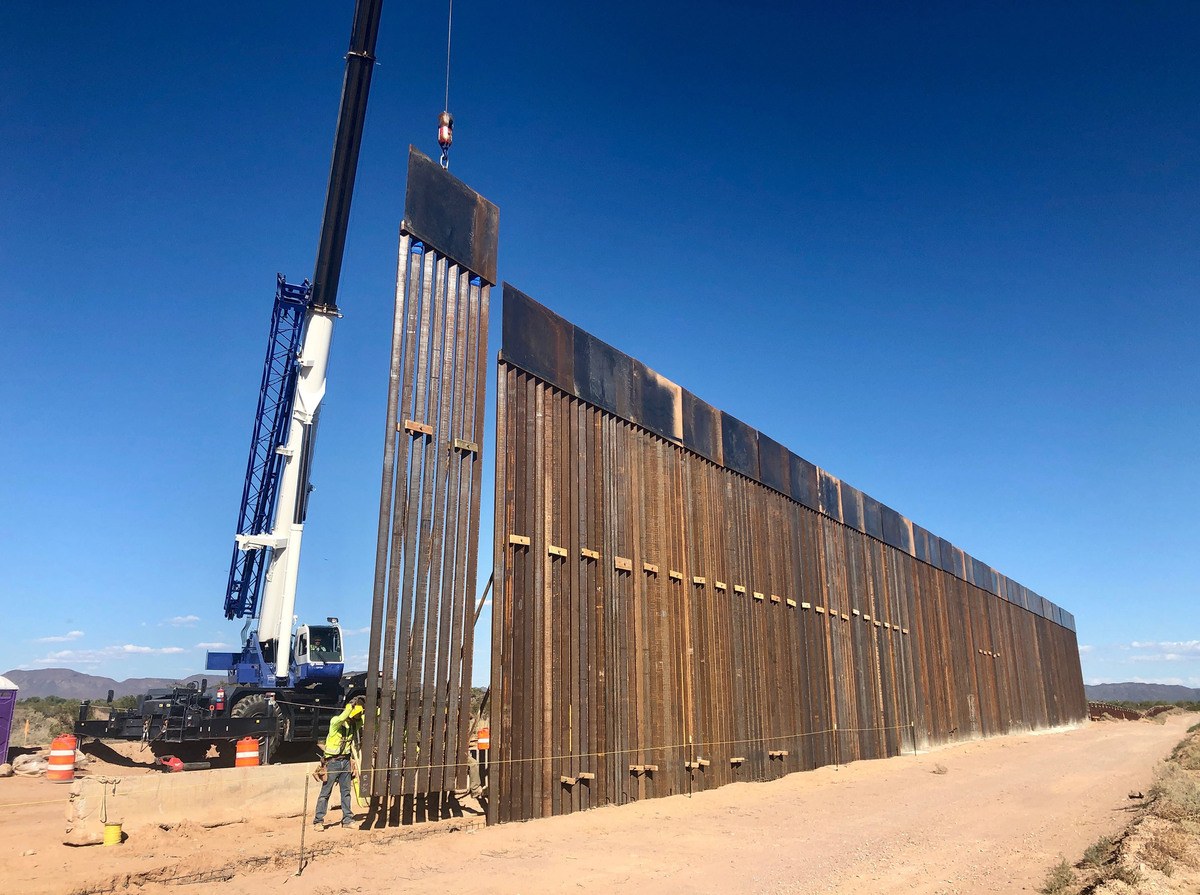 A 30-foot border barrier — as tall as a two-story building — rises from the desert near Lukeville, Ariz.

The Trump administration is using the same Real ID Act of 2005 that empowered President George W. Bush to build his border wall without heeding environmental protections. But the pace of waivers is quickening under Trump's aggressive construction timeline. Under Bush, the Department of Homeland Security issued five waiver proclamations. Under Trump, DHS has issued 15 waivers that exempt the contractors from a total of 51 different laws, ranging from the Clean Water Act to the Archeological Resources Protection Act to the Wild Horse and Burro Act.

"The waivers allow them to bypass a lot of red tape and waive the public input process," says Kenneth Madsen, a geography professor at Ohio State University at Newark who monitors border wall waivers. "It allows them to avoid getting bogged down in court cases that might slow down their ability to construct border barriers along the nation's edges."

The most important law that CBP is able to sidestep is the National Environmental Policy Act, NEPA—known as the Magna Carta of federal environmental laws. It requires a detailed environmental assessment of any "federal actions significantly affecting the quality of the human environment." NEPA covers most large federal construction projects, such as dams, bridges, highways, and waterway projects.

Considering the construction of 450 miles of steel barriers on the nation's southern boundary, "There is no question that NEPA would require preparation of an environmental impact statement, with significant input from the public, from affected communities, tribal governments, land owners, and land managers throughout the process. And it is outrageous that a project of this magnitude is getting a complete exemption from NEPA and all the other laws," says Dinah Bear. She served as general counsel for the White House's Council on Environmental Quality for 24 years under four presidents. 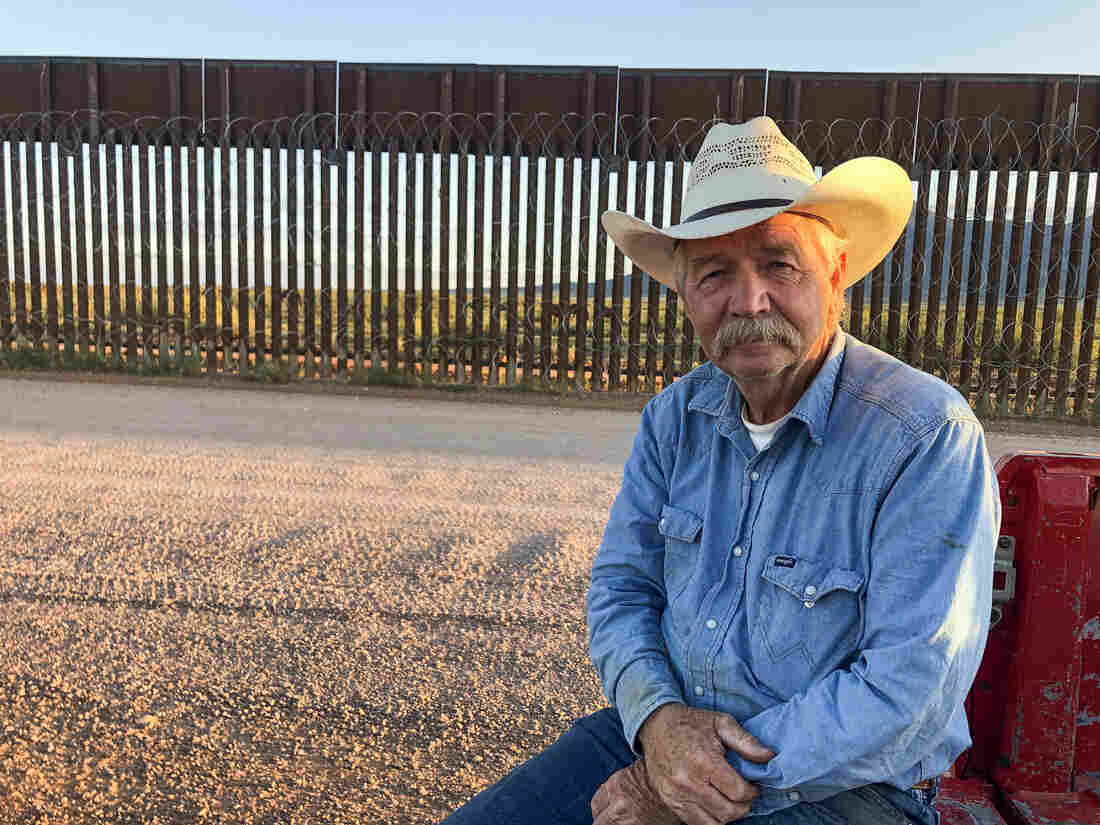 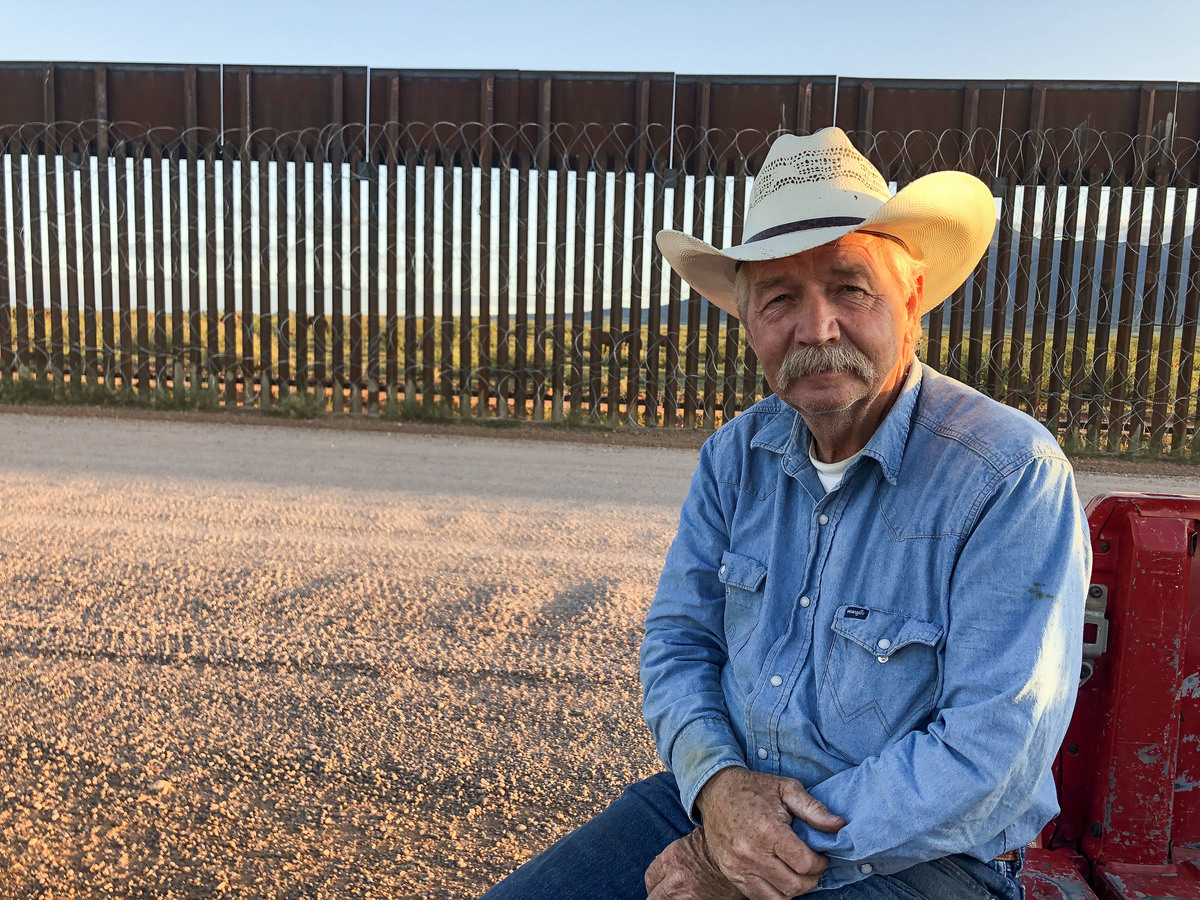 To some border residents, barriers — regardless how controversial — are the best way to stop illegal activity.

"I support Donald Trump 100%. If you're going to build a wall, build it!" declares rancher John Ladd.

His family has bred cattle in Arizona since it was a territory. Their ranch backs up to the Mexican border near the town of Naco. The surrounding mountains purple at dusk, as a bull and his harem of cows munch gramma grass.

Time was when the Ladd ranch was overrun by people crossing the border illegally. They stole things and cut fences and left trash in the pastures. Then in 2016, at the end of the Obama years, CBP built a fence, continuing what Bush started.

Ladd reserves judgment on the propriety of a wall through a federally protected wilderness. But for his ranch, walls worked.

"When this 18-foot wall went in, it was obvious that immigrants quit coming through here," he says. "It was an immediate improvement with the security of our border as well as our houses."

The vast Tohono O'odham Nation — nearly as big as Connecticut — shares 62 miles with Mexico. The tribe vehemently opposes the border wall. Several thousand tribal members live south of the border, and are permitted to pass back and forth using tribal IDs.

Already, border barriers are encroaching on the reservation from the east and west. While there is currently no funding to wall off the Arizona Tohono O'odham lands from Mexico, tribal members fear CBP could change its mind at any time.

"We have lived in this area forever," says Tribal Chairman Ned Norris, Jr. "And so a full-blown 30-foot wall would make it that much difficult for our tribal citizens in Mexico and in the U.S. to be able to actively participate with family gatherings, with ceremonial gatherings." 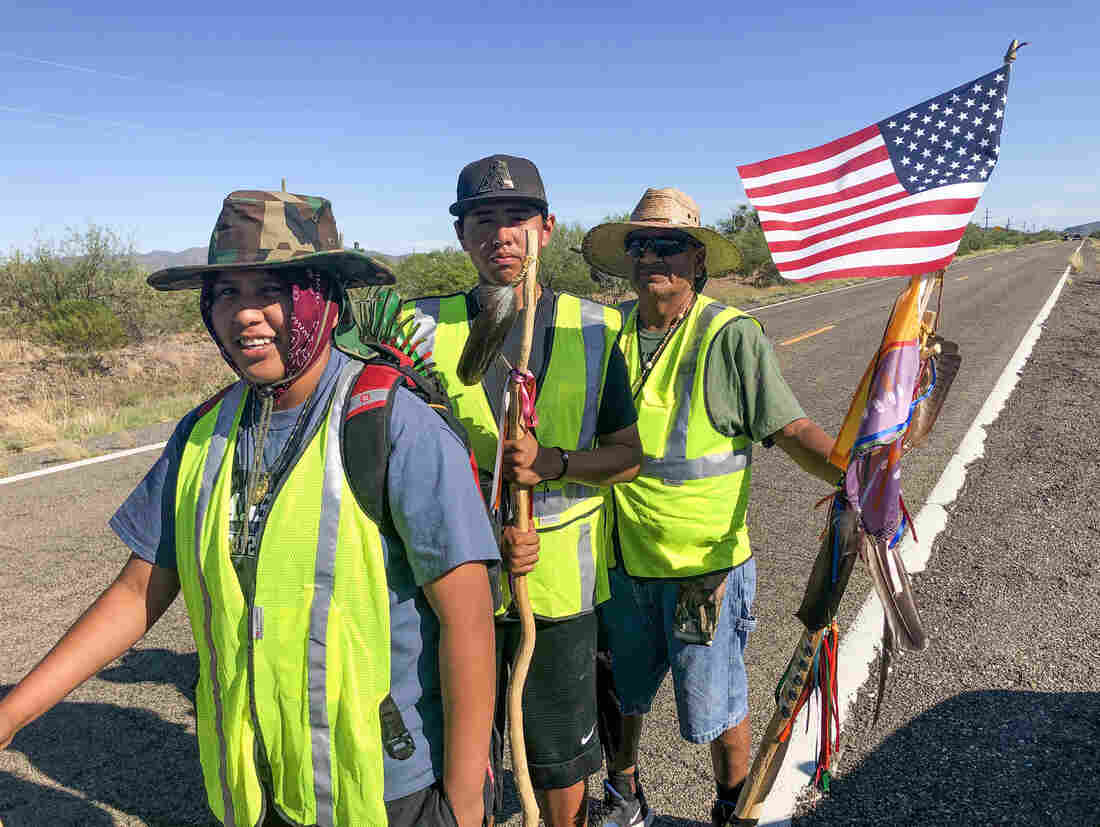 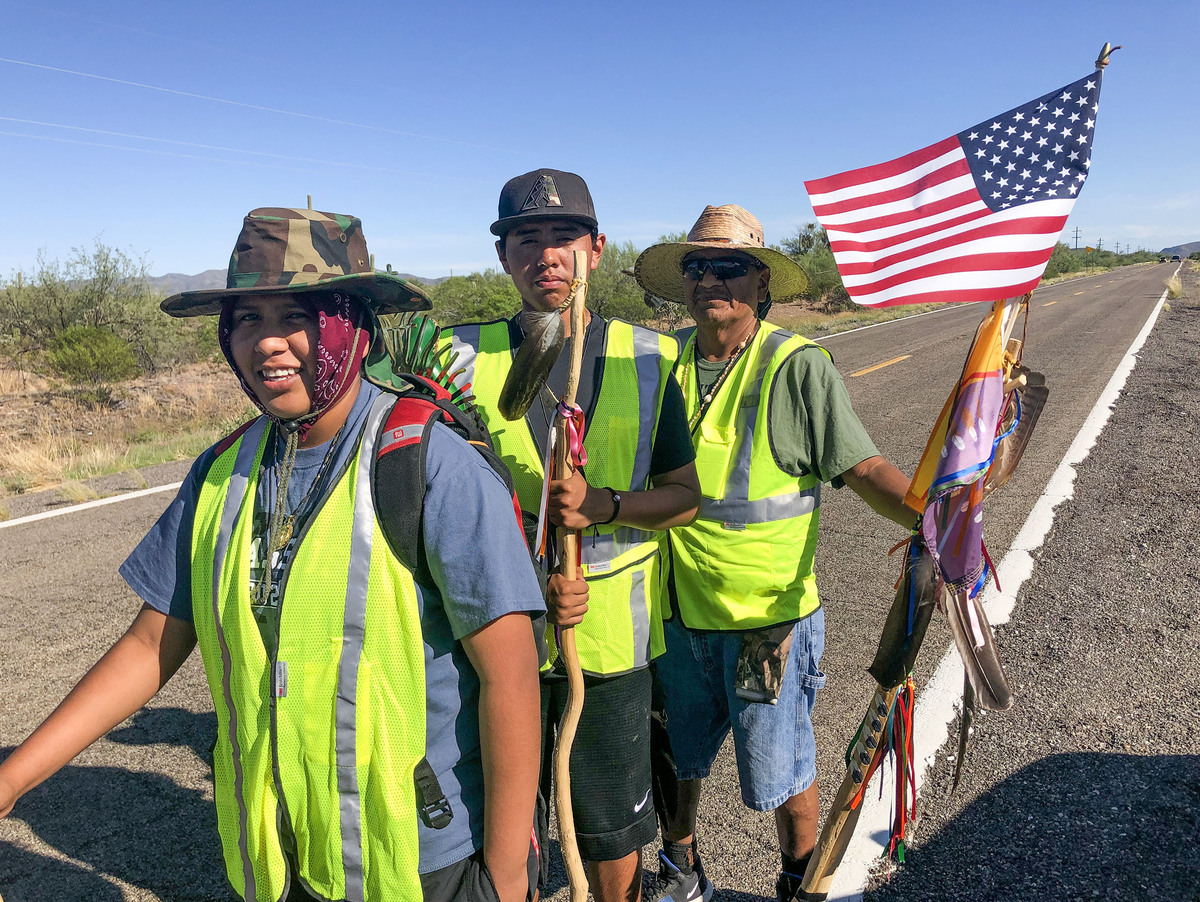 The Antone family, (left to right) Genae, Brice and Tim, tribal members of the Tohono O'odham Nation, on a pilgrimage for St. Francis.

Traditions are important to the Antone family. The father, son and daughter recently joined other tribal members walking westward along State Highway 86, which runs through the reservation. They were on a pilgrimage for St. Francis.

Genae Antone, 18, stopped to talk about another rite of passage. Young Tohono O'odham men run a roundtrip of 300 miles from the reservation, across the border, to the salt flats at Mexico's Sea of Cortez.

"The salt run, for the men, that's really important for us as Tohono O'odham. For the men to run all the way to the water to get salt," she said. "Some people go and get seashells. So I don't really necessarily think it (the border wall) is a good idea."

The Antone family — carrying a feathered walking stick, a statue of the virgin, and an American flag — then continued on its pilgrimage.