Accessibility links
How Bolivia's Evo Morales Could Win A 4th Term As President He's already the country's longest-serving leader — almost 14 years in office. His party controls all government branches and much of the national media. Now he's poised to win a new term on Oct. 20. 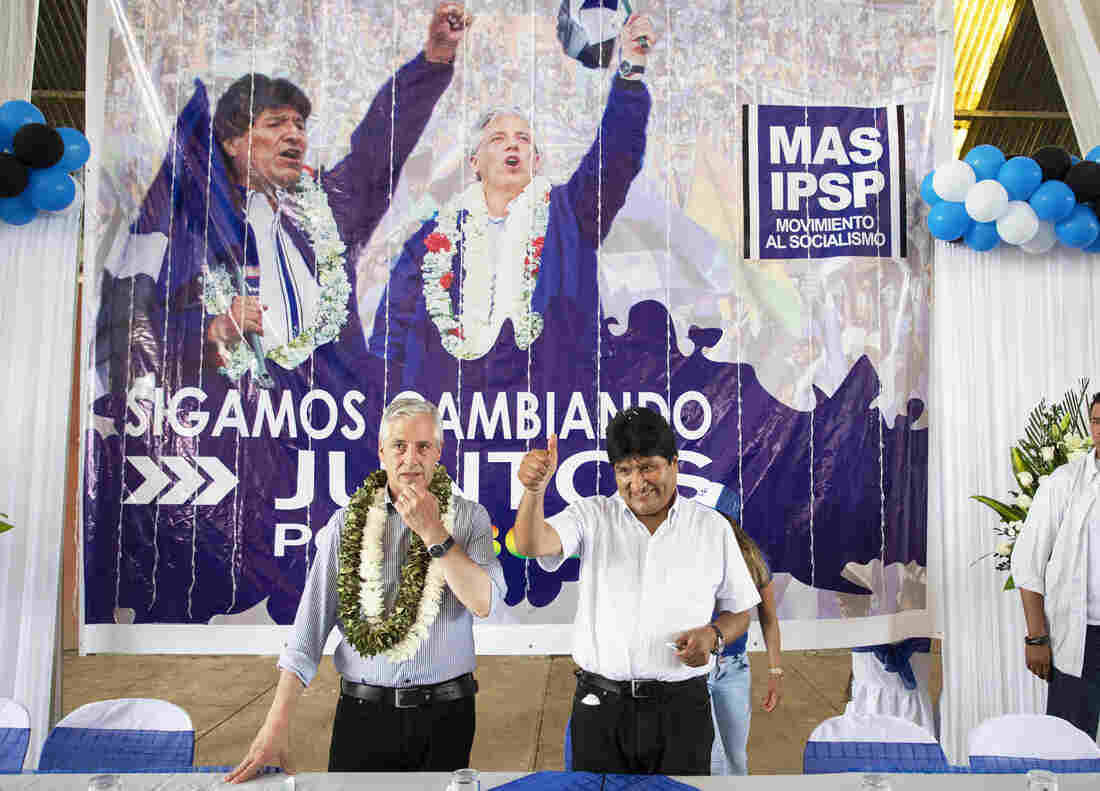 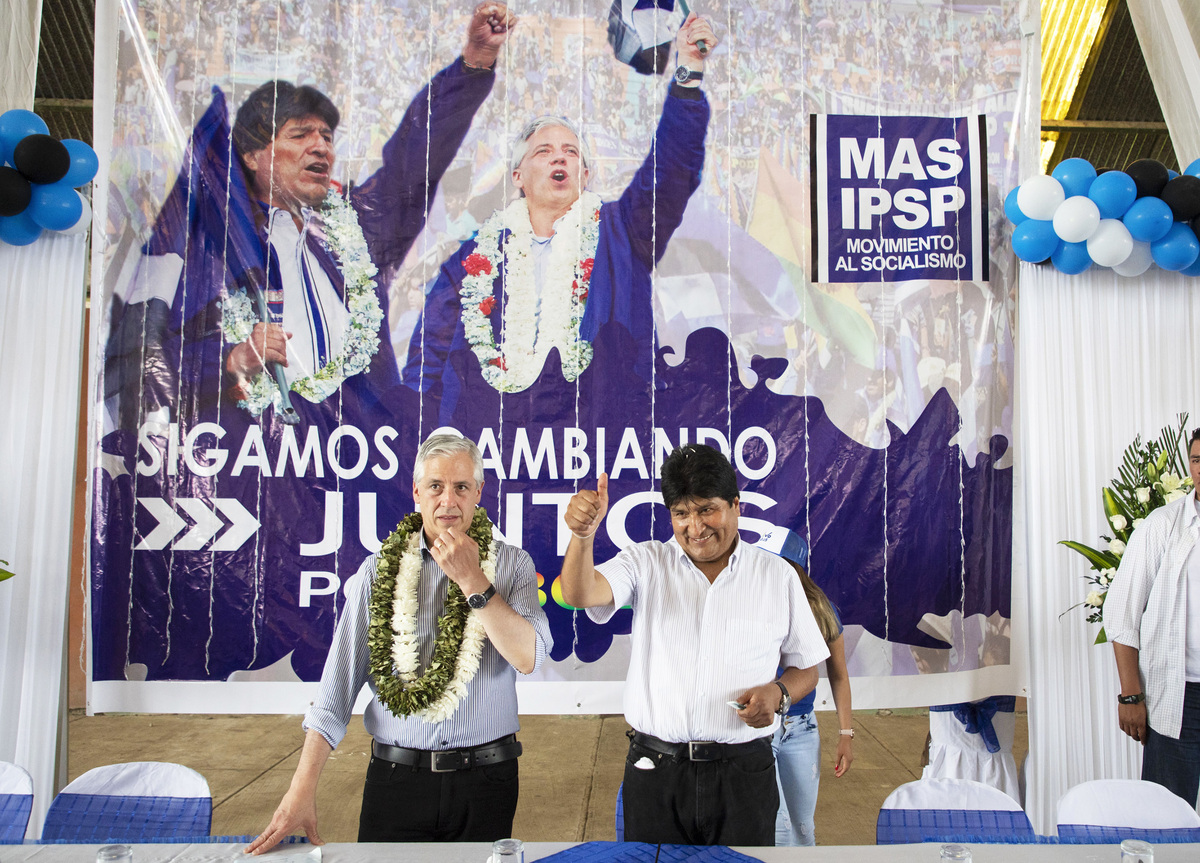 Bolivian President Evo Morales (right) with Vice President Álvaro García Linera launch their campaign for reelection in Chimore, Cochabamba department, Bolivia on May 18. The election is set for Oct. 20.

After he was reelected to a third term in 2014, President Evo Morales attended a symbolic swearing-in ceremony at the ancient ruins of Tiwanaku in western Bolivia, wearing an embroidered gown and headdress of an Incan emperor.

Now, as Bolivia's first president of Indigenous descent attempts to win a fourth consecutive term in the Oct. 20 election, critics contend that Morales is acting more like an emperor than a president.

They point to his decision last year to move his office and government ministries into a luxurious new skyscraper in La Paz. The 29-story building, which features a jacuzzi, a sauna and a heliport on the roof, towers over the colonial-style buildings in the capital's historical district.

Approaching 14 years in office, Morales is already the longest-serving president in Bolivian history, while his Movement Toward Socialism party controls all branches of government as well as much of the Bolivian media. And now he is pushing the legal envelope to remain in power.

In 2016, Morales tried to amend Bolivia's constitution so he could run for a fourth term but voters narrowly rejected the proposal in a referendum. Rather than accept the result, Morales appealed to the nation's highest court which, according to analysts, is packed with the president's allies. The judges ruled that Morales' reelection bid could proceed on the grounds that the president's human rights would have been violated were he not allowed on the ballot.

"Of course Morales should not be a candidate, but that's the way dictators operate," says María Ángela Alvizuri, 38, a La Paz homemaker, as she stared at the presidential skyscraper.

Diego Ayo, a newspaper columnist and opposition activist, says Morales is starting to resemble other elected presidents in Latin America who are turning increasingly authoritarian — like Daniel Ortega in Nicaragua and Nicolás Maduro in Venezuela.

Under Morales "we have had a gradual deterioration of democracy," he says. "It would be really naive to say that we are in a democracy just because we hold elections."

But to supporters, Morales has ushered in a Bolivian renaissance after years of violent street protests, political turmoil and economic depressions in South America's poorest country. Between 2003 and 2005 — the year Morales was first elected — Bolivia cycled through three presidents.

A former union organizer and a member of the Aymara Indigenous group, Morales, 59, has ushered in a rare period of political stability while his decision to partially nationalize the country's vital natural gas industry helped make its economy one of the fastest growing in Latin America. Morales was twice reelected by landslides in a country where more than 40% of the population is Indigenous.

"Many people see themselves in Morales and see that their children may be able to be president," says Gonzalo Mendieta, a political analyst in La Paz. "That still has a lot of power in Bolivia."

His appeal is apparent in the town of Tiwanaku, which sits about two hours from La Paz next to the ruins where Morales was sworn in. Like the president, most of the 800 or so residents here are Aymara Indians.

One of them, Juan Condori, owns a small plot of land on the outskirts of the village where he grows lettuce and celery. A government program helped him and dozens of neighboring farmers build greenhouses, which have helped them harvest more vegetables that they sell in La Paz.

"I like this government and want it to continue," Condori says. "I don't know where all this talk about Morales being a dictator comes from. If he were a dictator, bullets would be flying. There would be political prisoners and a state of siege. But this government doesn't do that."

Tiwanaku is also home to a new soccer stadium, a high school and a remodeled health clinic, projects that were funded by the Morales government. As she walks through the village, Justina Loza, a local artist, says that previous presidents ignored Bolivia's Indigenous people. But as an Aymara Indian, she says, Morales "is always going to help us."

Still, after years of economic expansion driven largely by the region's demand for its natural gas and China's hunger for its minerals, Bolivia's economy is slowing. Government corruption scandals as well as the president's decision to ignore the results of the referendum, have tarnished his image, according to analysts. In addition, his government was perceived as slow to respond to massive fires that have burned more than 6 million acres of forest and savanna in eastern Bolivia.

Morales remains the front-runner, however, several polls show Carlos Mesa, a centrist former president and the main opposition candidate, gaining ground. The most recent survey by La Paz daily Página Siete showed Morales with 33%, Mesa with 26% and Óscar Ortiz, a senator from eastern Santa Cruz state, in third place with 9%.

"I recognize the positive things" that Morales has brought to Bolivia, Mesa tells NPR. But he says a fourth term would be illegal and turn Morales into "an authoritarian strongman."

To avoid a December runoff, Morales must garner at least 40% of the vote and top his closest rival by at least 10 points. Morales argues that voters should give him that margin and let him finish a job he started when he took office in 2006.

In one TV campaign spot, he looks directly into the camera and declares: "The country is doing well. But we need five more years."