Accessibility links
Elton John On Music, Addiction And Family: 'I'm Proud Of Who I Am Now' The artist says his father's early misgivings about his chosen career became a source of motivation: "He gave me the determination to make something of myself." John's new memoir is called Me. 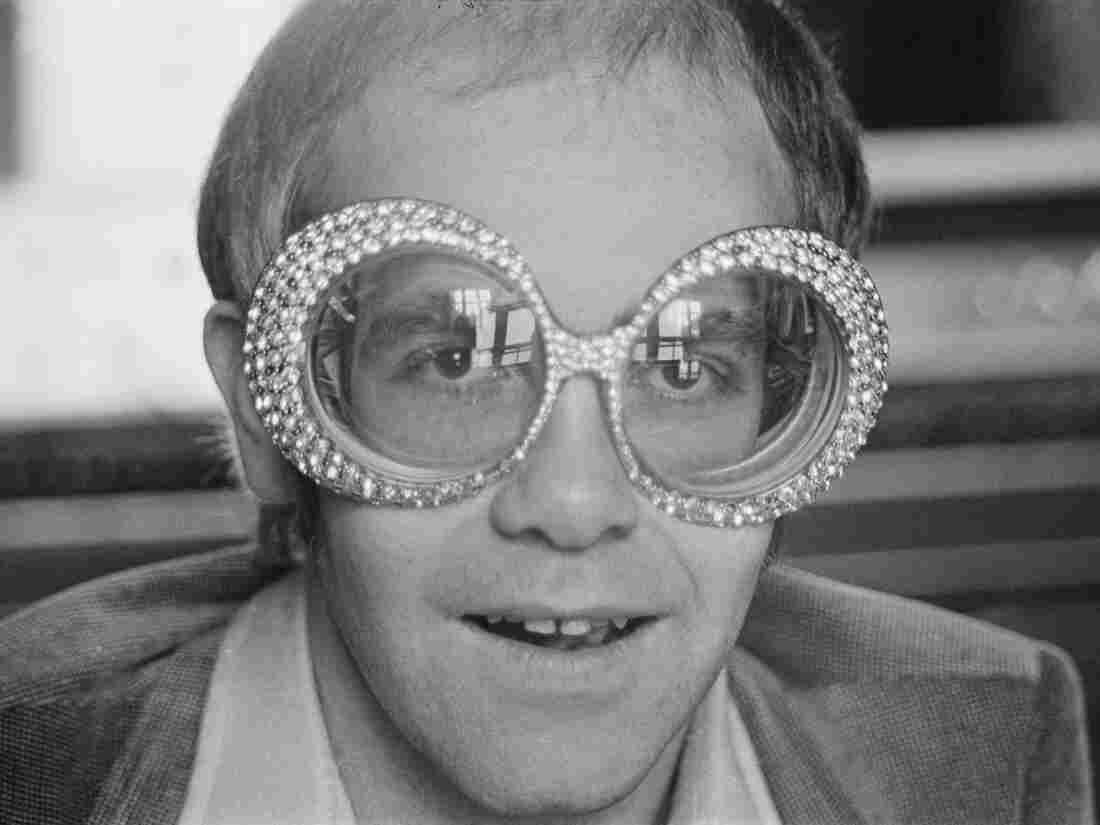 In his memoir, Me, British singer-songwriter Elton John, shown in 1974, shares revelations about his sexual orientation and his struggle with cocaine. D. Morrison/Daily Express/Hulton Archive/Getty Images hide caption 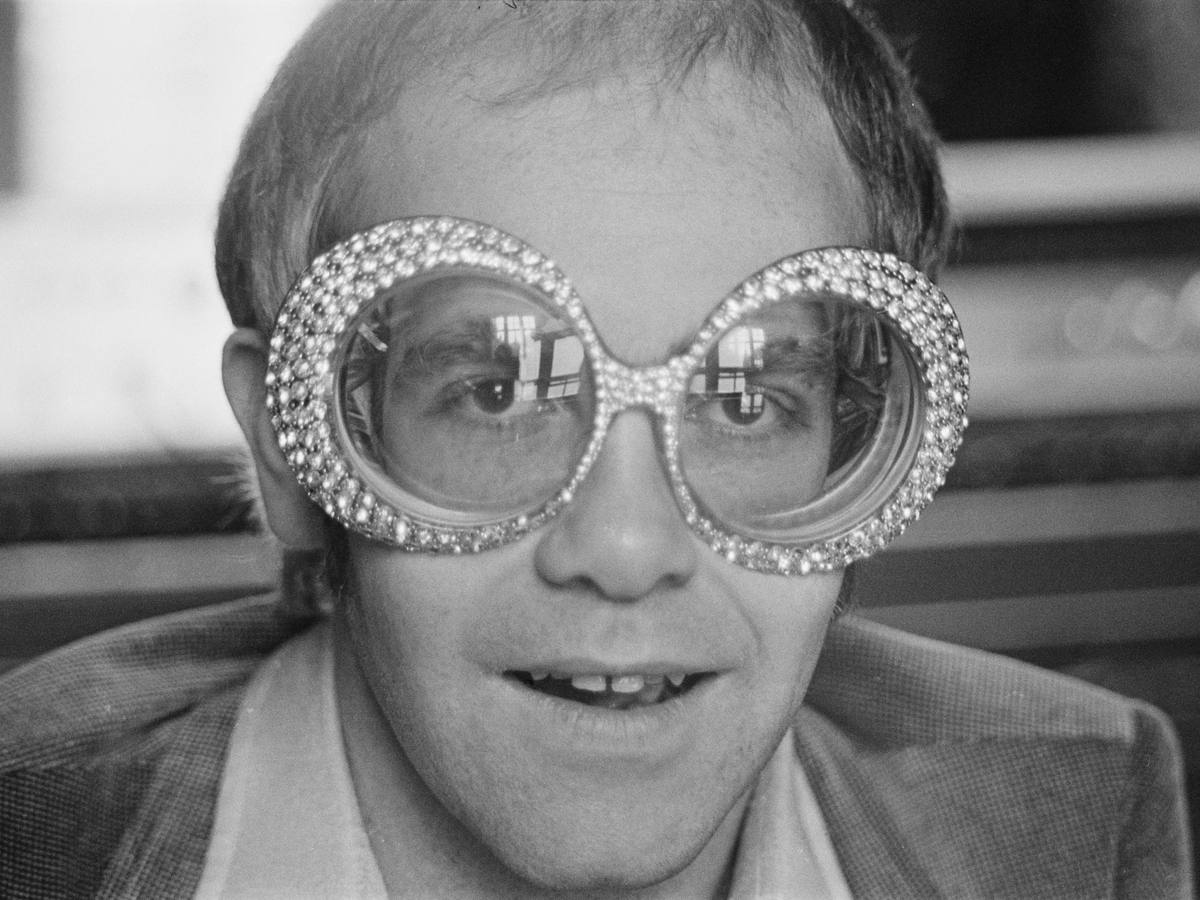 In his memoir, Me, British singer-songwriter Elton John, shown in 1974, shares revelations about his sexual orientation and his struggle with cocaine.

The recent biopic Rocketman painted a Hollywood version of Elton John's life, but a new memoir, Me, comes straight from the artist himself. In it, he describes how, as a young man, he was determined to enter the music business, in spite of some misgivings about rock 'n' roll in his household. As he tells Fresh Air, "My dad, of course, hated it."

And yet, that disapproval only fueled his will to succeed. Me recounts many more stories from the pop superstar's personal life, including how proposing to a woman helped him realize he was gay and how saying yes to a line of cocaine at a ranch in Colorado led to a long battle with addiction: "Of course, it was fool's gold. That was the start of a love-hate relationship with it for 16 years, basically." In conversation with Terry Gross, John explains how that habit and others eventually landed him in rehab, where he got the chance to start over.

"I hated the way I behaved. I hated how I treated people. I hated what I'd become. But I'm grateful that I had it, because then I learned how to become who I am now," John says. "I'm proud of who I am now. I like who I am."

On his parents' fraught marriage 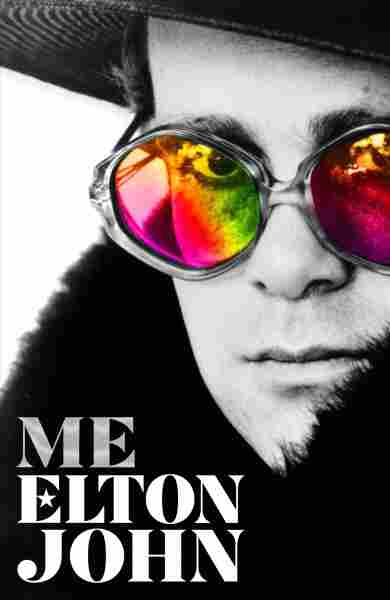 My father and my mother should never have gotten married. They got married very quickly after the war, which a lot of people did, [and] they were totally unsuited to each other. The '50s was an incredibly tough time to grow up in: It was after the war, it was very conservative — so if you were in a marriage and you wanted to get out of it, it was very tough, because divorce was frowned on socially. I can remember my uncle, when my parents were thinking of getting divorced, saying, "You can't get a divorce. What will the next-door neighbors say?" That was what it was like.

The nice thing about it is that when they did get divorced, and my mother found Fred and my dad found Edna, they found the love of their lives. That, I'm very happy about. But the bit in between it was hard to take. I dreaded my dad coming home, because it would be a row immediately. And then I would retreat to my room, look at my books, look at my records, look at my toys. I found [a] love of inanimate objects, because inanimate objects, which I kept in pristine condition, couldn't harm me or talk back to me.

On the music of his youth

I grew up with Nat King Cole, Frank Sinatra. I loved George Shearing. He was a jazz player, a pianist who was blind, and when I first became successful in the early '70s, I went to New York and I found him. I said, "Thank you. I grew up with your music and it was fantastic. I was only 6 or 7 years old when heard your music, but I loved it and it made me want to play the piano like you." I was very grateful to the music I had. But when Elvis Presley came knocking on the door, and Little Richard and Jerry Lee Lewis, who started jumping on the piano, then that was what I wanted to do.

Elton John Takes A Reflective Leap On 'Diving Board'

On discovering sex and how it compared with music

I didn't have sex until I was 23 — that was the first time. I didn't know anything about it. ... I thought the thing you had to do was take a girl out to the cinema, and maybe try and get your hand into her brassiere. I tried that a couple of times, and I got rebuffed quite quickly, and it didn't turn me on. So you know, it was all about music. Music was sex for me.

A lot of rock musicians go into rock music to pull girls; that's one of the big attractions. "We can play onstage, and we can flirt with the girls, then we can go backstage, and then we can take them home, and we can have sex with them." That was never my motive. I was just wanted to play music. I was so obsessed with music, nothing entered my head apart from that.

On the effects of cocaine

It was all about music. Music was sex for me.

On the darkest moments of his addiction

I didn't take drugs constantly, all the time. I would stop for nine months. But whenever you go back to something you love like cocaine, it gets worse every time you relapse, and you take more. I'd think, "I will get well, I will get well," and then the madness of it all is, while I was thinking that, I'd be taking yet another line of cocaine.

I would have seizures in the middle of the night, and people would find me on the floor and put me to bed. Twenty minutes later, I'd be up doing cocaine again. They would put me into bed and say, "We've got to call the doctor," and I said, "No, no, I'll be fine." The seizures were horrible. They were really distressing. And that's how mad and how dangerous my addiction was. I look back at it with sheer horror.

There were no celebrity rehabs then; I was at boot camp. I got up at six o'clock in the morning. I shared a room. I had to make my bed. I had to work a washing machine, which I didn't know how to do. And I worked really, really hard. I went in kicking and screaming, ready to get well. But also I had a problem with authoritarianism. I, at one point, left and sat on the steps outside the hospital with my suitcase crying, thinking, "What are you doing? Where are you going to run to now and behave like this yet again?" So I went back and I ate humble pie.

Sam Briger and Mooj Zadie produced and edited the audio of this interview. Bridget Bentz, Molly Seavy-Nesper and Daoud Tyler-Ameen adapted it for the Web.