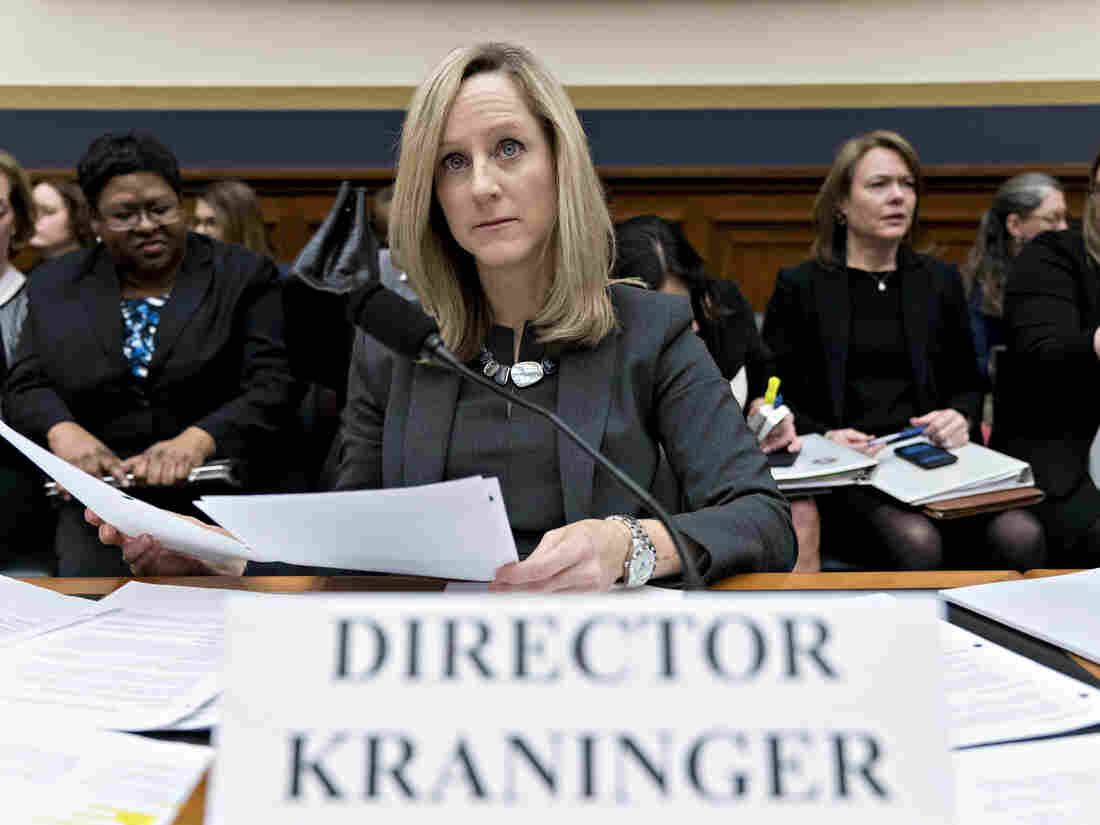 Kathleen Kraninger is director of the Consumer Financial Protection Bureau, an agency that was thwarted by the U.S. Department of Education from examining problems with a troubled student loan forgiveness program. Andrew Harrer/Bloomberg via Getty Images hide caption 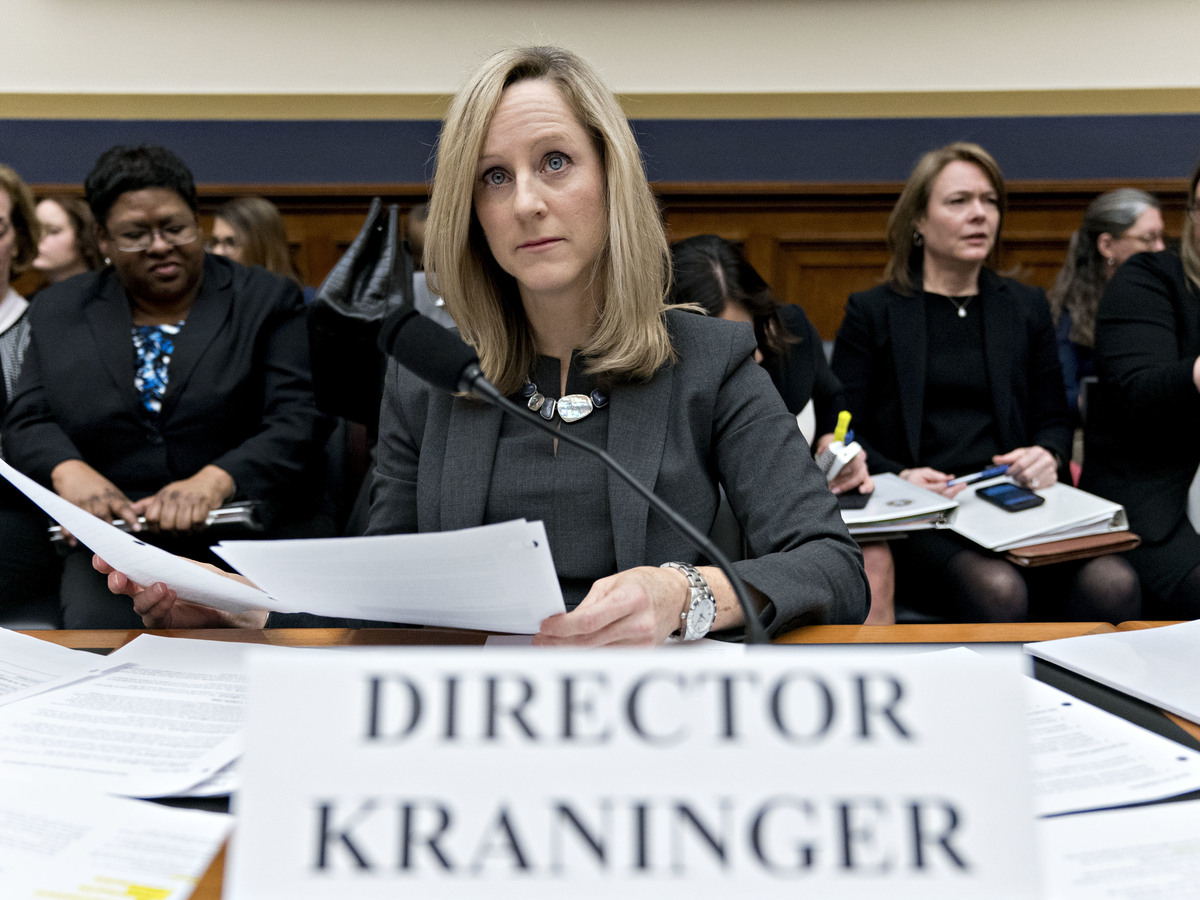 Kathleen Kraninger is director of the Consumer Financial Protection Bureau, an agency that was thwarted by the U.S. Department of Education from examining problems with a troubled student loan forgiveness program.

Starting early last year, the nation's most powerful consumer protection agency sent examiners into companies that run student loan call centers to try to fix a troubled loan forgiveness program. But the Department of Education blocked the bureau from getting the information it needed, NPR has learned.

The Public Service Loan Forgiveness Program is designed to help firefighters, military service members, nonprofit workers and others. But thousands of people say they were treated unfairly and rejected.

One of them was Wendy Feliciano, a police sergeant in the Bronx borough of New York City. In 2007, she heard about the program, which promises public service workers that if they make qualifying student loan payments for 10 years, their remaining student loan debt will be forgiven. 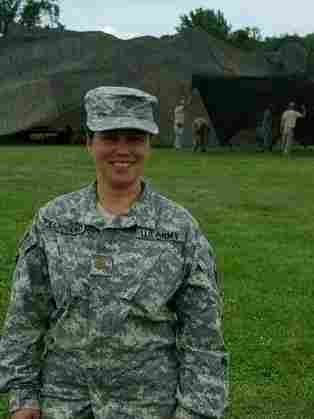 Wendy Feliciano is in the Army Reserve and is a sergeant in the New York Police Department. After 10 years of loan payments, she was told she was in the wrong repayment plan to qualify for the Public Service Loan Forgiveness program. "This is a complete scam," she says. Courtesy of Wendy Feliciano hide caption 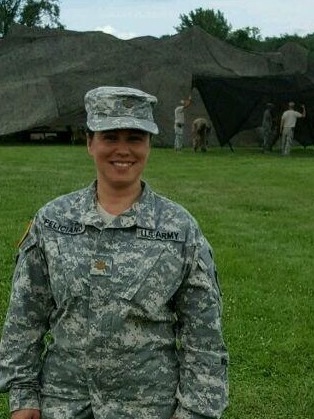 Wendy Feliciano is in the Army Reserve and is a sergeant in the New York Police Department. After 10 years of loan payments, she was told she was in the wrong repayment plan to qualify for the Public Service Loan Forgiveness program. "This is a complete scam," she says.

That sounded great to Feliciano. She owed about $40,000. So she called the number on her loan statement and says she was told "you qualify for the program."

"I was really angry and really frustrated," Feliciano says. "I told everybody this is a complete scam."

A lot of people feel that way. By the Education Department's own numbers, only 1% of people applying for loan forgiveness are being approved. The other 99% — many thousands of people like Feliciano — are getting rejected.

Multiple lawsuits have been filed. A government watchdog office has issued scathing reports.

Now NPR has learned that the nation's most powerful consumer watchdog, the Consumer Financial Protection Bureau, launched an effort to fix problems but the Trump administration blocked it from trying to help.

"That's terrible," says Christopher Peterson, a former top CFPB attorney. "There are hundreds of thousands of people who are counting on the government to get this right for their livelihood and their well-being for their families."

In early 2018, with complaints rising, the bureau geared up to help those people.

Several sources familiar with the matter tell NPR that the bureau sent teams of examiners into servicing companies that run student loan call centers. Such examinations typically go on for two months, with the team embedded at the company. There are months of follow-up after that.

But the Trump administration's Education Department told loan servicing companies not to share information with the bureau about the vast majority of student loan borrowers, citing privacy concerns.

That's even though the companies are allowed to turn over private financial information to credit reporting companies. But the Education Department told the companies it was not OK to share information with a law enforcement agency. The CFPB is charged with enforcing consumer protection laws.

"That seems like nonsense to me," Peterson says, referring to the privacy issue. "It's the United States government."

Sources tell NPR that the move scuttled the CFPB's efforts to help. The examiners couldn't get most of the information the bureau wanted, so it couldn't identify problems and help fix them.

"It's 100% clear that the public service Student Loan Forgiveness Program is badly broken; it needs to be fixed," Peterson says. "And we have teams of seasoned, trained accountants and lawyers whose job and expertise is fixing exactly that type of thing. But instead of sending them in, we're just leaving them on the sidelines and the problem's not getting solved."

Peterson says the bureau could go to court to force the issue and get the information it needs. But with a new director appointed by the Trump administration, he says, "the leadership of the CFPB has chosen not to pick that fight."

The vast majority of student loans — nearly $1.5 trillion worth — are federal loans. But the Education Department tells NPR it's not the CFPB's job to police them. The department says the CFPB should stick to the much smaller world of private student loans.

"The Department of Education is charged with overseeing the Federal Student Aid portfolio, the CFPB is charged with oversight of the private student loan industry. The Department takes its responsibility to provide high-quality service to federal student loan borrowers very seriously. FSA devotes significant resources to vendor oversight and monitoring efforts and has established performance-based contracts focused on driving improvements in customer satisfaction and outcomes related to reduced borrower delinquency and default. In order to protect student privacy, we ask that any requests for information from servicers be sent directly to the Department. We are currently working closely with the CFPB on protecting student borrowers from third-party debt relief fraud."

State prosecutors and outside experts like Peterson say the department is failing to properly oversee all those federal loans by itself.

Peterson, who was a legal adviser to the former director at the CFPB, says the Department of Education is wrong and the bureau has authority to oversee how loan servicing companies are treating people with those nearly $1.5 trillion worth of federal student loans.

"Congress provided the CFPB with crystal clear authority to engage in law enforcement investigations and supervisory audits of companies that collect educational debt," Peterson says. "The Trump administration's position to the contrary is utterly wrong on the law and a ridiculous betrayal of the 44 million student loan borrowers counting on the government to protect their rights."

As far as student loan servicing companies themselves, "the challenge for a servicer is that we're stuck in the middle," says Scott Buchanan, the executive director of the Student Loan Servicing Alliance.

He says the loan servicing companies he represents have a tough job working with millions of borrowers and myriad complex loan programs. "It's really complicated," he says. "And so I have no doubt that servicers from time to time do make some mistakes, and when those get identified that we work to fix them."

Buchanan says Congress could help by passing legislation to simplify the various student loan programs. Congress did pass a provision to help borrowers like Wendy Feliciano who were in the wrong repayment plan for public service loan forgiveness.

This fix from Congress is called Temporary Expanded Public Service Loan Forgiveness and it has run into serious problems, too. In Feliciano's case, she's not currently eligible because she was also in the wrong type of loan to qualify for several years. She got that sorted out with her loan servicer in 2011, but she says she still was not put into the right repayment plan even then.

As far as what happens next, Buchanan says it would be best for everybody if the CFPB and the Department of Education could work together so servicing companies weren't getting conflicting messages.

The CFPB declined an interview but said in a statement that it will continue to "take action against those who fail to comply with the law." The Education Department tells NPR it is negotiating an information-sharing agreement with the CFPB. That would replace a previous agreement that the department terminated.

Peterson says so far it's unclear whether that will do much to help the situation. CFPB Director Kathleen Kraninger is scheduled to make her semiannual report to Congress this week.