Accessibility links
U.S. 'Show Of Force' After Turkish-Backed Fighters Get Too Close To Base In Syria The potential risk to U.S. personnel came on the same day Russia said its military is now acting as a buffer between Turkish and Syrian troops along the border. 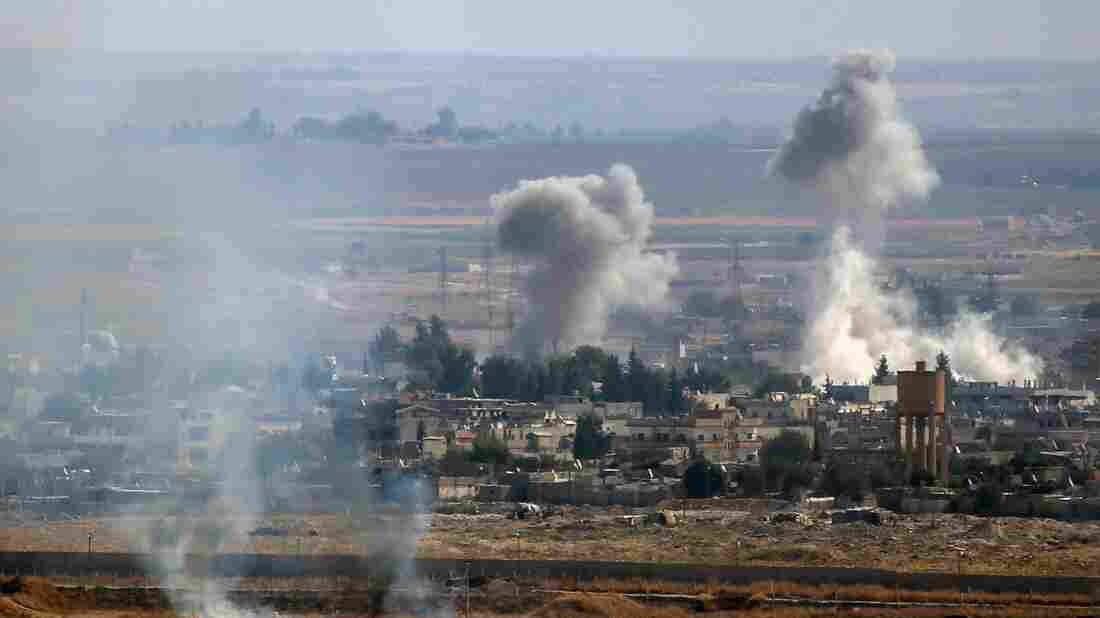 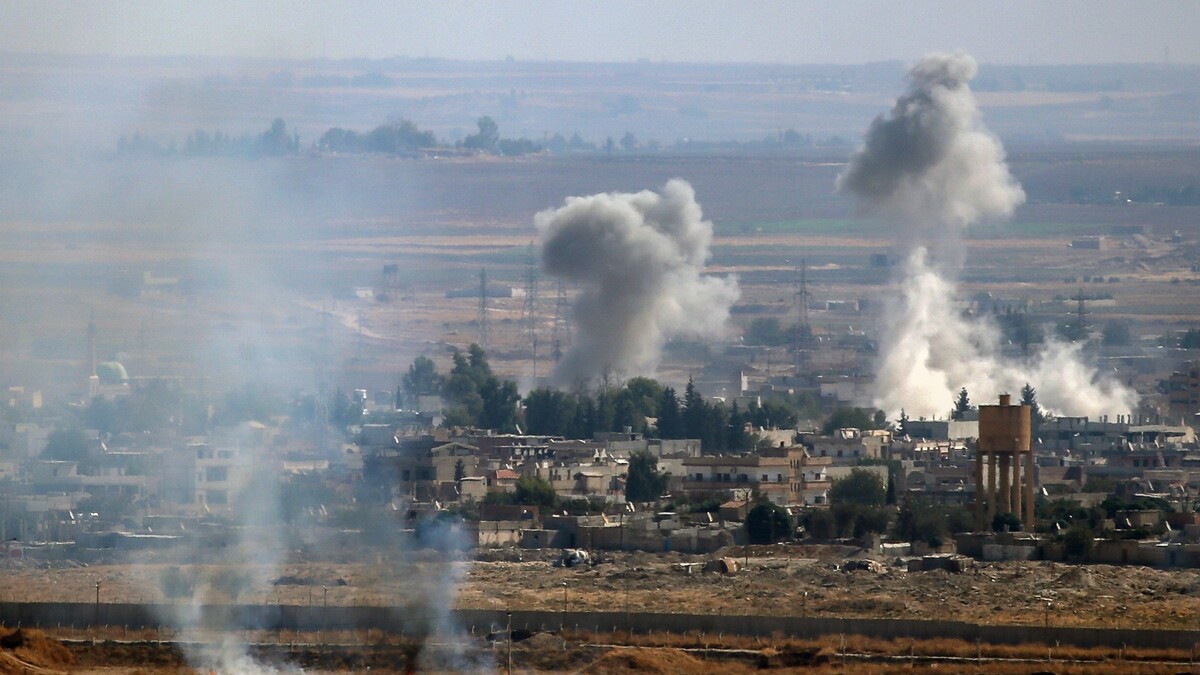 Turkish-backed militias carrying out attacks in northern Syria came very close to American forces on the ground on Tuesday, putting them and their base "directly at risk," a U.S. official in Syria tells NPR.

"The Turkish forces violated a standing agreement with the U.S. to not get close enough to threaten U.S. troops on the ground," the official says. "U.S. forces responded with a show of force using aircraft to demonstrate the forces were prepared to defend themselves, as well as communication with the Turkish military through formal channels to protest the risk to U.S. forces."

The U.S. show of force included Apache attack helicopters and F-15 warplanes. No shots were fired, the official says.

The potential risk to U.S. personnel came on the same day Russia said its military is now acting as a buffer between Turkish and Syrian troops along the border. And on Monday, U.S. NATO allies decided to halt weapons exports to Turkey over the incursion.

Days after seemingly acquiescing to a Turkish invasion of northern Syria aimed at routing the U.S.'s Kurdish allies, the White House has officially reversed course, calling for a cease-fire, imposing economic sanctions and dispatching Vice President Pence to Ankara.

In an executive order issued Monday, President Trump declared that Turkey's offensive "undermines the campaign to defeat the Islamic State of Iraq and Syria, or ISIS, endangers civilians, and further threatens to undermine the peace, security, and stability in the region. ..." 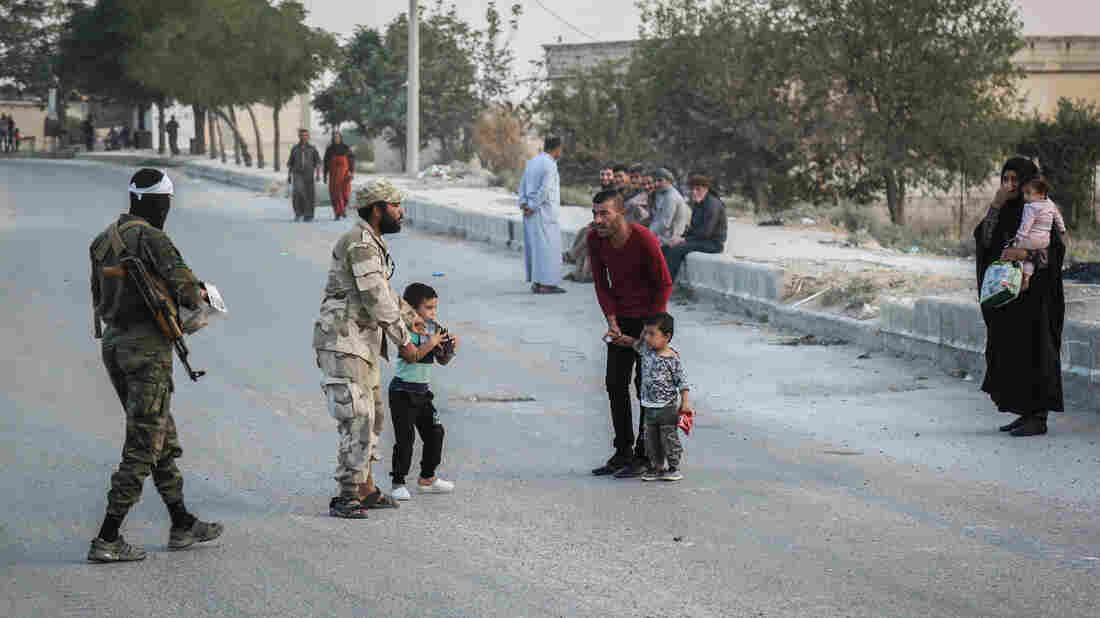 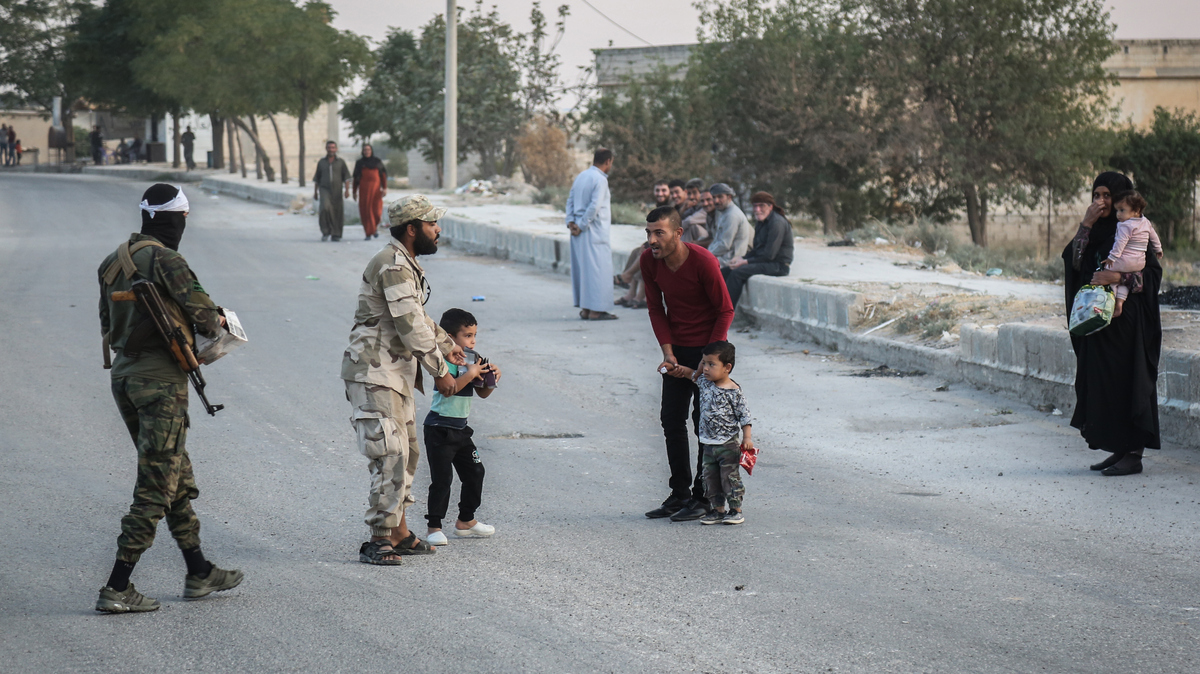 The order halts a $100 billion trade deal being hammered out between Ankara and Washington, raises tariffs on Turkish steel to 50% and imposes sanctions on senior Turkish officials and the country's Defense and Energy ministries.

"I am fully prepared to swiftly destroy Turkey's economy if Turkish leaders continue down this dangerous and destructive path," the president said in a statement.

The U.S. would consider ramping up the sanctions unless Turkey "is willing to embrace a cease-fire, come to the negotiating table and end the violence," said Treasury Secretary Steven Mnuchin.

Trump's order follows strong criticism from within the president's own party over Washington's perceived abandonment of its Kurdish allies in northern Syria and reports of executions of Kurdish militia captured by Turkish forces on the battlefield.

It also occurs as lawmakers express concern over reports of civilians killed and displaced in the fighting and that Islamic State fighters captured in the years-long battle against the extremist group have managed to escape from detention amid the chaos.

"The reality is that what the president has done so far is first, green-light the Turkish operation to begin with, and now the sanctions he announced yesterday are really pathetic," Van Hollen told NPR's Morning Edition on Tuesday.

"Steel represents about four-tenths of 1% of all of Turkey's exports," Van Hollen said. "The president still has a standing invitation to [President Recep Tayyip] Erdogan to visit the United States. A lot more is necessary to get the Turks to stop and to protect ourselves from the resurgence of ISIS — which is what's going to happen. [Former Defense Secretary Jim] Mattis and others have predicted that."

Hundreds of U.S. troops are preparing for a full withdrawal from northern Syria, a U.S. defense official told NPR. The hasty exit was ordered by Trump over the weekend after it became clear that U.S. forces were in danger of being caught in a crossfire between Turkey and the Kurds. Some U.S. troops were expected to stay behind at al-Tanf, near the Jordanian border.

Defense Secretary Mark Esper has declined to say how long the withdrawal would take, but he said it would be done carefully so as not to leave any U.S. equipment behind. Esper said he would travel next week to Brussels to urge NATO to impose "diplomatic and economic measures" against fellow member Turkey for its "egregious" actions.

Médecins Sans Frontières said that it would be evacuating its international staff from northeast Syria, explaining that the "highly unpredictable and fast-changing situation has made it impossible for us to negotiate safe access to deliver healthcare and provide humanitarian assistance to people in distress."

The European Union on Monday joined France and Germany in agreeing to halt weapons exports to Turkey. The EU condemned the military action in Syria, saying it "seriously undermines the stability and the security of the whole region."

In another sign of fallout, auto giant Volkswagen said on Tuesday that it was postponing a decision on building a new factory in Turkey.

Meanwhile, Pence, speaking to reporters outside the White House on Monday, said he had been asked by the president to lead a delegation to Turkey "as quickly as possible." He is expected to be accompanied by national security adviser Robert O'Brien.

Despite a phone call last week between Trump and Erdogan in which the White House acknowledged that Turkey would begin the offensive in northern Syria and that U.S. forces "will no longer be in the area," the vice president reiterated the administration's insistence that it did not approve the invasion.

"The United States of America did not give a green light to Turkey to invade Syria," Pence said. "The president has been very clear on that point, and reiterated that to President Erdogan today. ... President Trump pressed him very strongly in the telephone call today to immediately embrace a cease-fire."

Turkey launched its attack in Syria last week to target members of the Syrian Democratic Forces, which it views as terrorists. The SDF have received weapons and training from the U.S. in their fight against ISIS and the Syrian government.

Even so, the Kurds on Sunday announced a deal with the Russian- and Iranian-backed government of Syrian President Bashar Assad to back them against the Turkish onslaught.

Since then, Syrian regime troops have reportedly moved to the border region to meet Turkish forces, sparking fears of a wider regional conflict and stoking criticism of the White House's approach.

"Russian President Vladimir Putin has barely commented on the Turkish operation; his military supports the Syrian government but also is selling advanced weaponry to Turkey.

After defeating 100% of the ISIS Caliphate, I largely moved our troops out of Syria. Let Syria and Assad protect the Kurds and fight Turkey for their own land. I said to my Generals, why should we be fighting for Syria....

Trump on Monday took to Twitter to respond to critics of his recent decisions.

"Let Syria and Assad protect the Kurds and fight Turkey for their own land," he wrote in one of a series of tweets on the subject.

"Anyone who wants to assist Syria in protecting the Kurds is good with me, whether it is Russia, China, or Napoleon Bonaparte. I hope they all do great, we are 7,000 miles away!" he wrote.

"I would much rather focus on our Southern Border which abuts and is part of the United States of America. And by the way, numbers are way down and the WALL is being built!" the president tweeted.