Accessibility links
Japan's Prime Minister Warns Of 'Prolonged' Effects Of Typhoon Hagibis' Destruction The government says the death toll from Typhoon Hagibis, which struck over the weekend, is at least 74. It brought record rainfall to parts of the country and forced tens of thousands into shelters. 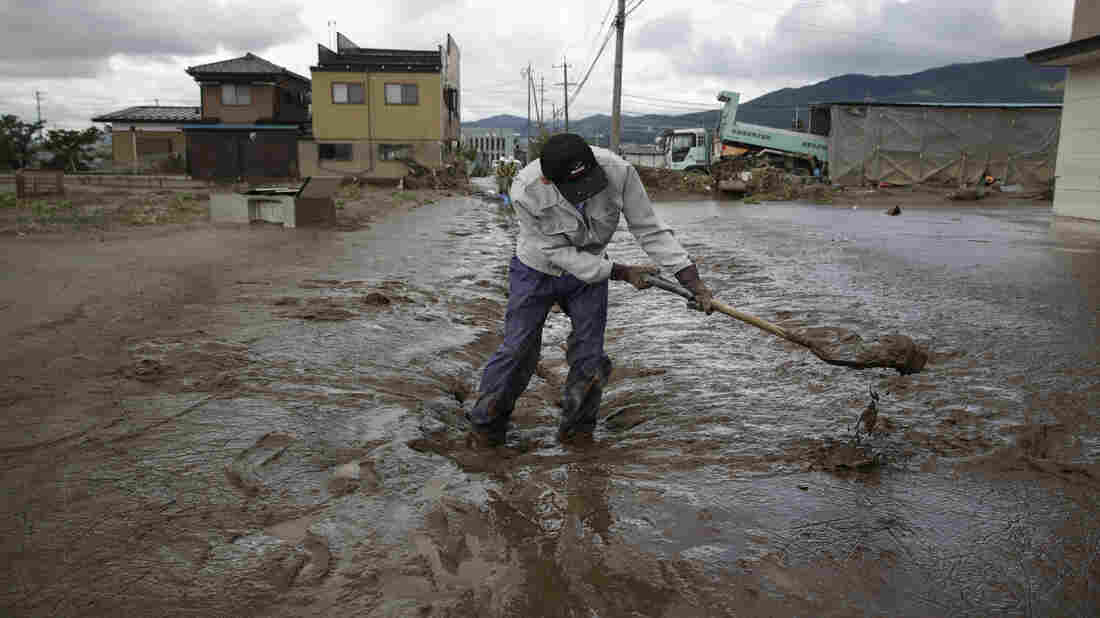 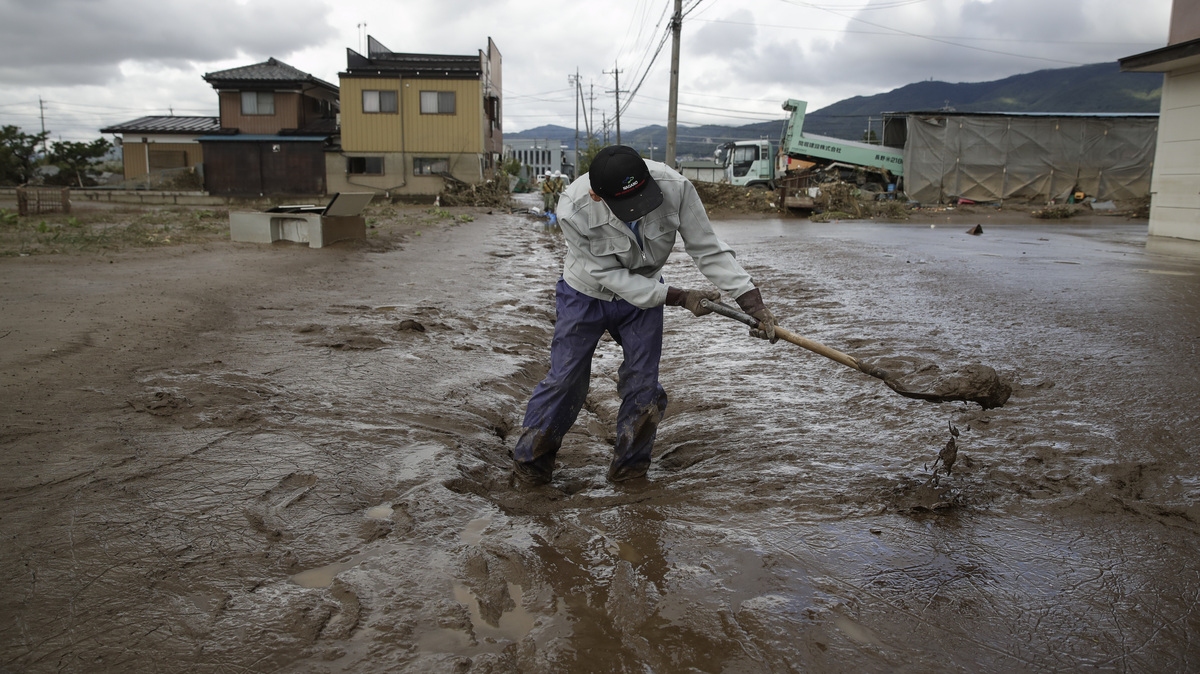 A man uses a shovel to scoop mud Tuesday in a neighborhood devastated by Typhoon Hagibis in Nagano, Japan.

Japan's Prime Minister Shinzo Abe warned on Tuesday of a "prolonged" impact from one of the most destructive typhoons in decades to hit the country. The death toll has now risen to at least 74, according to public broadcaster NHK.

In a parliamentary session, Abe said the rescue effort from the storm that hit central Japan over the weekend was "continuing around the clock."

The video shows a residential area and train marshaling yard near the Chikuma River in the city of Nagano, before and after Typhoon Hagibis struck. Read the article: https://t.co/AnduBz3E97 #typhoon #hagibis #japan #naturaldisaster #Nagano pic.twitter.com/ugFklCgH4C

"It is urgent to provide adequate support for the victims," Abe said, according to a translation from Japanese published in Japan Times.

"There are concerns that the impact on life and economic activities will be prolonged," he said.

Abe said the government would draw on a 500 billion yen ($4.6 billion) special reserve to pay for costs incurred because of the storm.

The country's infrastructure ministry said embankment collapses affecting 47 rivers in 66 locations had been confirmed as of Tuesday, but officials said they still don't have a complete picture of the damage.

About 34,000 homes were without electricity and 110,000 were without running water, the government said. More than 30,000 people were still in shelters as of late Monday.

As NHK reported, "many places received up to 40 percent of their annual rainfall in just two days." In hard-hit Nagano, on the main island of Honshu, rainfall hit a record of 134.5 millimeters (5.3 inches) in a 24-hour period.

At least 27 people died in the Fukushima area alone, according to NHK. The broadcaster reported that the victims include a mother and son who were thought to have been in a vehicle when the storm started. They were found nearly 2 1/2 miles apart.

The storm also caused major travel disruptions. Japanese media report that at least 120 train cars sustained damage from flooding in a depot for a bullet train line, the Hokuriku Shinkansen.

"I can't believe that something like this actually happened," she told Mainichi Shimbun.

Early Sunday morning, Shibata's husband took his 97-year-old mother to a local evacuation shelter in Nagano, but she chose to stay behind thinking that the flooding wouldn't be too serious.

"I have a cat, so I thought if I took it to the evacuation shelter, it would cause trouble to other evacuees," she told Mainichi.

She sent her husband worried messages by phone as the water kept rising through the night. She was eventually rescued from an upper floor.

When Toshitaka Yoshimura, a retired carpenter in Nagano, returned to his home after staying at an evacuation center during the storm, he was stunned by what he saw, according to The Associated Press.

His house was a muddy mess, with doors knocked out and furniture tossed about and covered in dirt.

"I put a lot of effort in this house," Yoshimura said. "I made all the furniture with my wife. Now look what happened in one day. Now this makes me want to cry."