Accessibility links
LeBron James Speaks Out On NBA Controversy After Returning From China James said he believed Houston Rockets General Manager Daryl Morey "wasn't educated on the situation at hand" when he expressed support for pro-democracy protesters in Hong Kong.

Back From China, LeBron James Speaks Out On NBA Controversy

Back From China, LeBron James Speaks Out On NBA Controversy 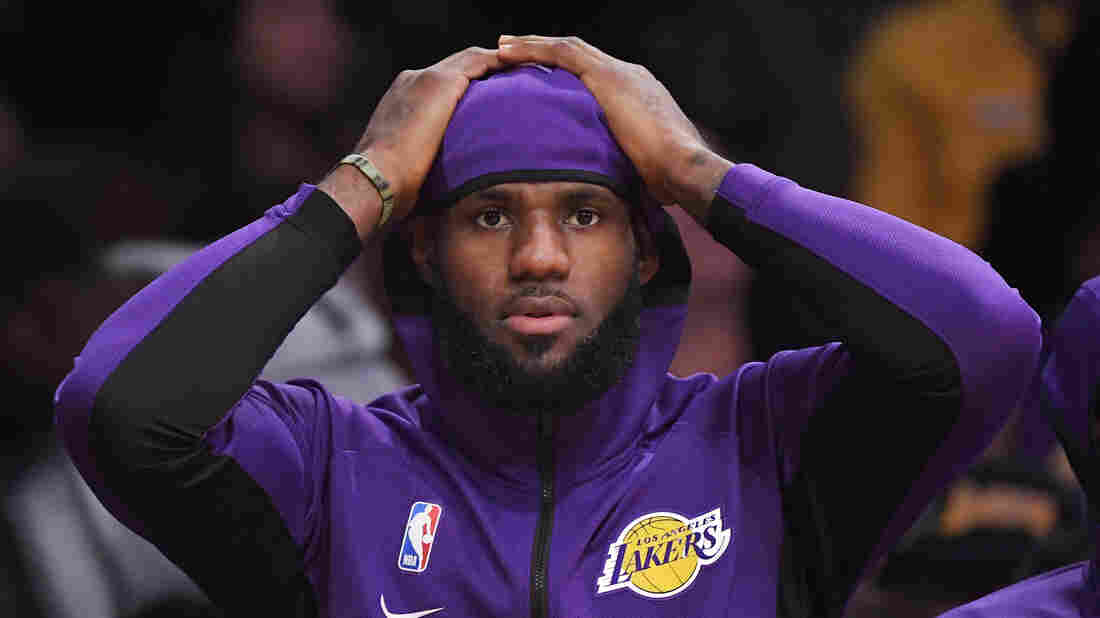 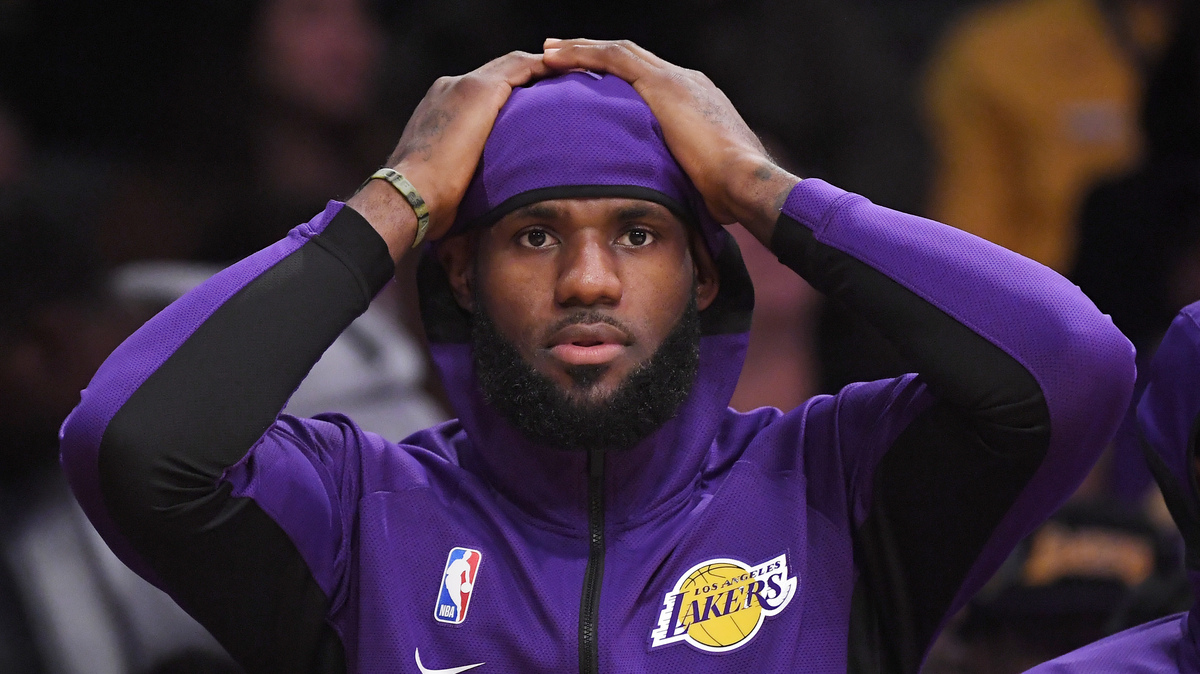 Los Angeles Lakers forward LeBron James, shown here during a game on Monday, has weighed in on comments made by Houston Rockets General Manager Daryl Morey.

James has just returned from the NBA's tense trip to China, where teams played exhibition games but many player appearances were canceled owing to the controversy over Morey's statement, which was deleted shortly after it was posted.

"Yes, we all do have freedom of speech, but at times there are ramifications for the negative that can happen when you're not thinking about others and you're only thinking about yourself," James told reporters in Los Angeles.

"I don't want to get into a word or sentence feud with Daryl, with Daryl Morey, but I believe he wasn't educated on the situation at hand and he spoke," James said. He added, "And so many people could have been harmed, not only financially but physically, emotionally, spiritually."

James' comments quickly met with criticism in the U.S. and beyond. For example, Michael David Smith from Pro Football Talk tweeted, "Morey literally was thinking about others. He was thinking about the people of Hong Kong, who want the same freedoms Americans take for granted."

James has previously spoken out about social issues in the U.S., including police shootings of black men and the far-right rally in Charlottesville, Va. But his latest comments have drawn criticism in the U.S. and outrage from protesters in Hong Kong. On Tuesday, a protester brandished a sign at a demonstration that showed James embracing a Chinese banknote. 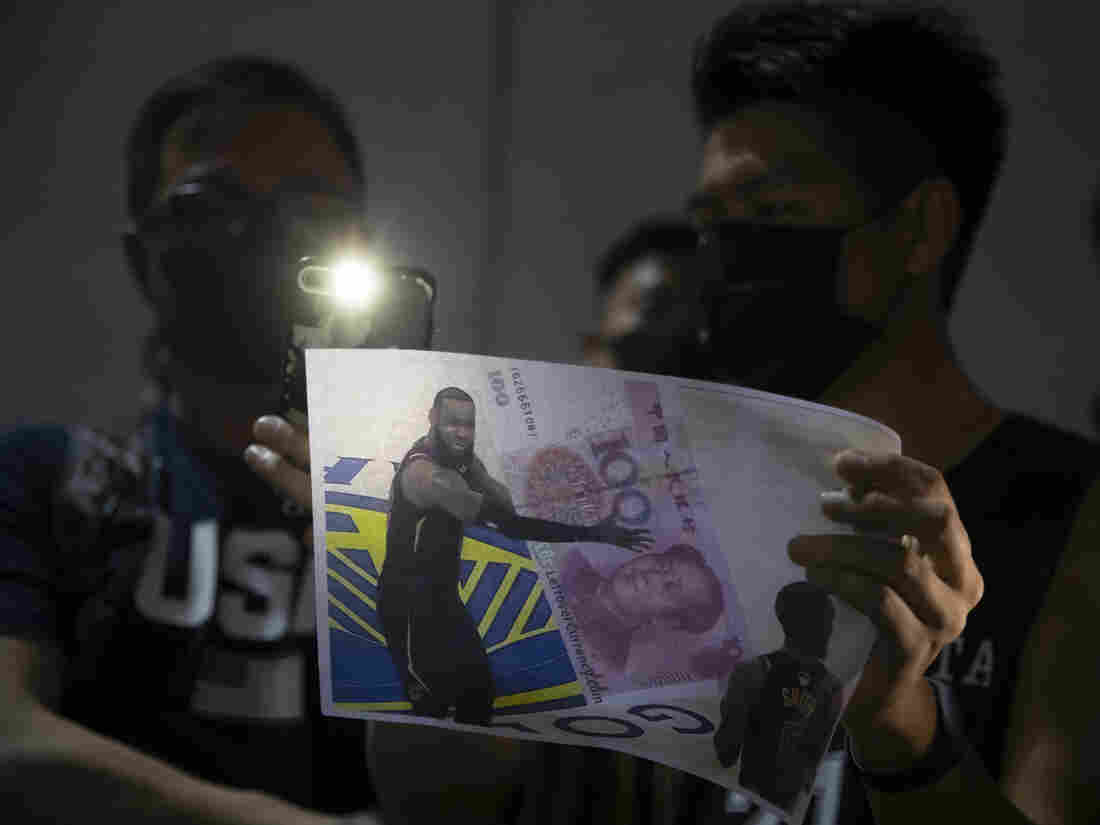 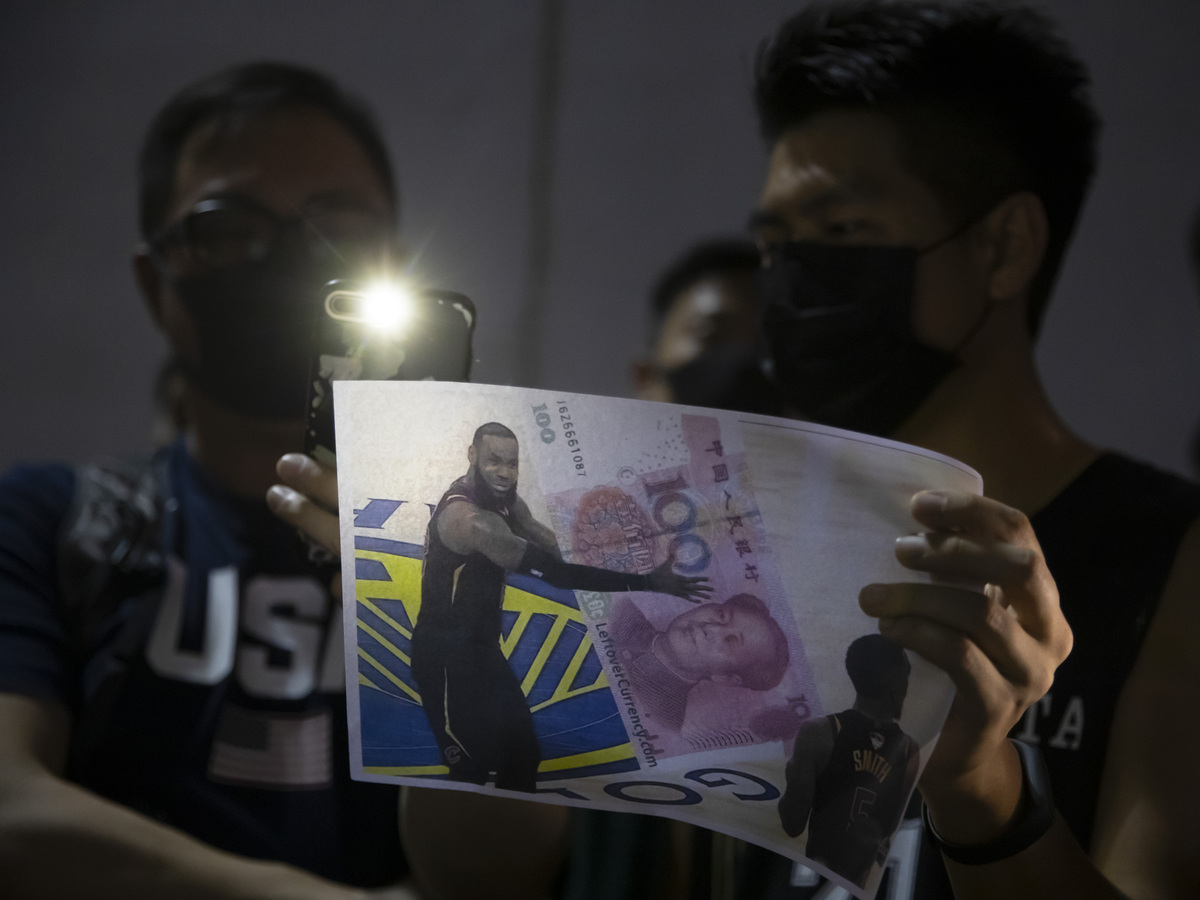 A demonstrator holds a sign showing Lebron James embracing a Chinese 100-yuan banknote during a rally in Hong Kong on Tuesday.

In his remarks, James did not engage with the specific message of Morey's tweet, which said, "Fight for Freedom. Stand with Hong Kong." He appeared to be speaking primarily about the Chinese backlash that targeted the broader NBA — including James' team. The Lakers played a preseason game in Shenzhen on Saturday, but Chinese networks refused to broadcast it, and the NBA canceled news conferences related to the game.

Morey's remarks supporting pro-democracy protesters in Hong Kong caused major backlash from China ahead of an exhibition series there between the Lakers and the Brooklyn Nets. The NBA has been seeking to expand its fan base in the country. But as NPR reported, the NBA's media partner in China, Tencent, said it wouldn't air any Rockets games, in addition to dropping the two preseason games played in China.

My team and this league just went through a difficult week. I think people need to understand what a tweet or statement can do to others. And I believe nobody stopped and considered what would happen. Could have waited a week to send it.

James said players on the overseas trip had feared games would be canceled.

"You know, so many different events have been canceled throughout our time there, and all we kept saying is ... we flew all these miles to come over to China — we would love to play the game of basketball in front of the fans," James said.

When the NBA canceled news conferences for the teams last week, the league said the players "have been placed into a complicated and unprecedented situation while abroad and we believe it would be unfair to ask them to address these matters in real time."

After Morey's initial comments caused a stir in China, Morey tweeted that he "did not intend my tweet to cause any offense to Rockets fans and friends of mine in China. I was merely voicing one thought, based on one interpretation, of one complicated event."

The NBA has been hit with a backlash of its own, particularly after it released different statements about Morey's remarks in English and Mandarin. As NPR's Brakkton Booker reported, the mixed messages "exposed the NBA to criticism that it was attempting to appease China at the cost of traditional U.S. values — such as free speech." The league later clarified in a news conference that it supports freedom of expression from the NBA's community members.

The protests in Hong Kong, which have continued for months now, are calling for greater freedoms in the territory. In recent weeks, they have grown more violent, with clashes between demonstrators and police. Earlier this month, a protester was shot by police.