Accessibility links
British Family Detained By ICE After Unlawfully Entering U.S. From Canada Eileen and David Connors say they accidentally crossed the U.S.-Canada border while vacationing. The couple and their 3-month-old son have been in a federal immigration facility since Oct. 3. 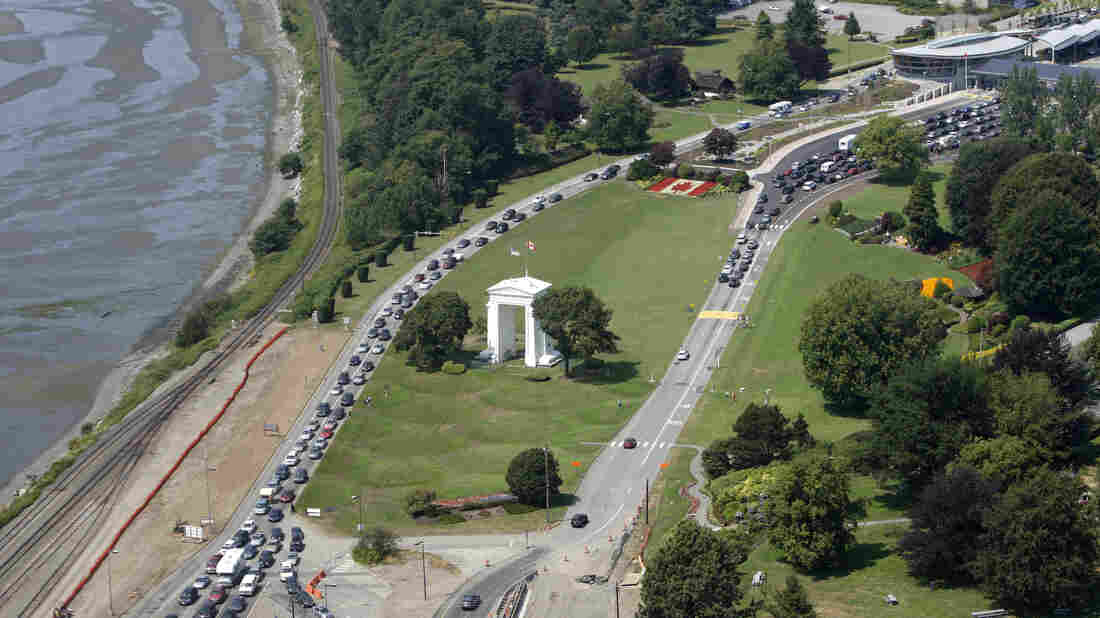 Cars line up to head into the United States (left) and into Canada (right) adjacent to Boundary Bay at a border crossing at Blaine, Wash., in 2009. A British couple who say they accidentally crossed the U.S.-Canada border were arrested by U.S. Customs and Border Protection agents on Oct. 3. Elaine Thompson/AP hide caption 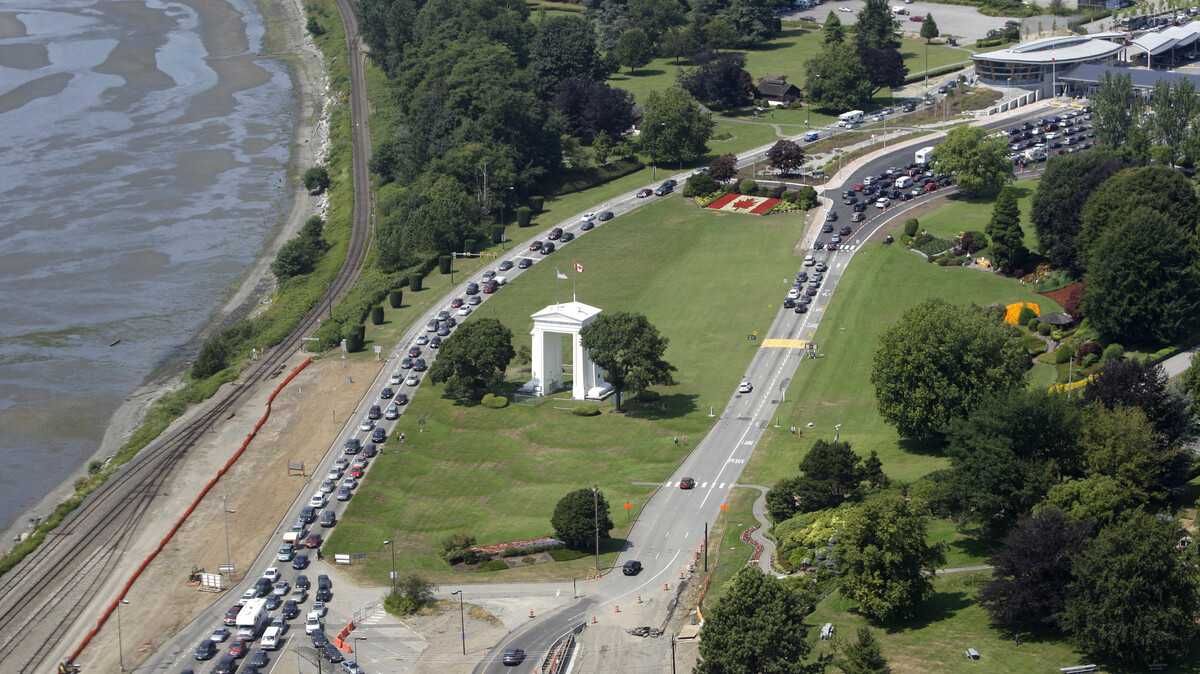 Cars line up to head into the United States (left) and into Canada (right) adjacent to Boundary Bay at a border crossing at Blaine, Wash., in 2009. A British couple who say they accidentally crossed the U.S.-Canada border were arrested by U.S. Customs and Border Protection agents on Oct. 3.

A British couple and their 3-month-old son are being detained in a federal immigration facility in Pennsylvania after they say they accidentally strayed across the U.S.-Canada border.

U.S. Customs and Border Protection agents arrested the family for unlawfully entering the country while on vacation in British Columbia. The family said that while driving, they swerved down an unmarked road to avoid an animal.

"This is how the scariest experience of our entire lives started," wrote Eileen Connors, 24, in a sworn statement shared by immigration attorneys with Aldea — The People's Justice Center, a pro bono legal clinic in Reading, Pa.

The Connors family was taken into federal immigration custody in Washington state on Oct. 3 and slept on what they describe as "a dirty floor" in a border patrol station. Connors said the family was asked about family members in the United States they could be released to, but instead of being freed they were transferred to the Berks Family Residential Center, outside Reading, on Oct. 5.

There, they say treatment worsened. Connors said that the Berks County-run facility was not equipped to care for such a young child and that normal caretaking items — such as a container of formula and teething powder — have been confiscated. At one point, her baby had no clothes while staff washed the clothes he arrived with.

"This facility is frigid," said Connors. "The staff here first told us they cannot turn on the heat in the building until the end of next month," even though temperatures are in the 50s at night.

As a result, her son's health is suffering, she says.

A few days ago, "[he] woke up with his left eye swollen and teary ... also his skin is rough and blotchy," Connor wrote.

In an echo of events at the U.S. southern border, where parents were separated from their children through a "zero tolerance" policy, the family wrote that in response to complaints about conditions, an ICE employee offered to remove their baby.

"If we wanted, we could sign papers to allow him to be separated from us and taken to some other facility," Connors said. "We were shocked and disgusted."

An ICE spokesman confirmed that the family is in custody at the Berks Family Residential Center but denied any mistreatment.

"BFRC provides a safe and humane environment for families as they go through the immigration process. BFRC supports all sanctioned local, state, and federal investigations into the safety and welfare of our residents," he said in a statement, adding that reports of abuse or inhumane conditions "are unequivocally false."

In addition to the couple and their son, the Connorses' extended family, which includes two other young children, was also taken into custody.

As British citizens, the family was entitled to visit the U.S. without a visa.

"They could just come to the United States with a passport," said attorney Bridget Cambria, who worked on the civil rights complaint that has been filed on behalf of the family with the Department of Homeland Security. "The reason it sounds silly is because it is silly."

Instead, Eileen and her husband, David, 30, are locked into an immigration process with few safeguards. People in federal immigration custody are not entitled to legal counsel and even the wrongful arrest of U.S. citizens can take weeks to sort out, as they struggle to prove their identities while in detention.

'Northland' Explores Life Along That 'Other' U.S. Border

'Northland' Explores Life Along That 'Other' U.S. Border

Other foreign tourists have also found themselves in dire straights. Last June, a French citizen visiting her mother in British Columbia was arrested by U.S. Customs and Border Patrol after jogging on the beach near the border of Vancouver and Blaine, Wash. She was held in federal immigration detention for two weeks.

Unlawful border crossings in the north are also on the rise, with 4,316 people apprehended at the Canadian border in 2018, up from 3,027 the previous year.

CBP has not yet responded to questions about why the Connors family was taken into custody.

Attorneys familiar with the case say they hope the family will be released later in the week, based on communication with the British Embassy.

In her statement, Connors said conditions at the facility slowly improved after she was able to speak to someone from the British Embassy on Oct. 8. Still, she wrote that the experience will haunt them.

"We have been treated like criminals here, stripped of our rights, and lied to," she said. "We will be traumatized for the rest of our lives."