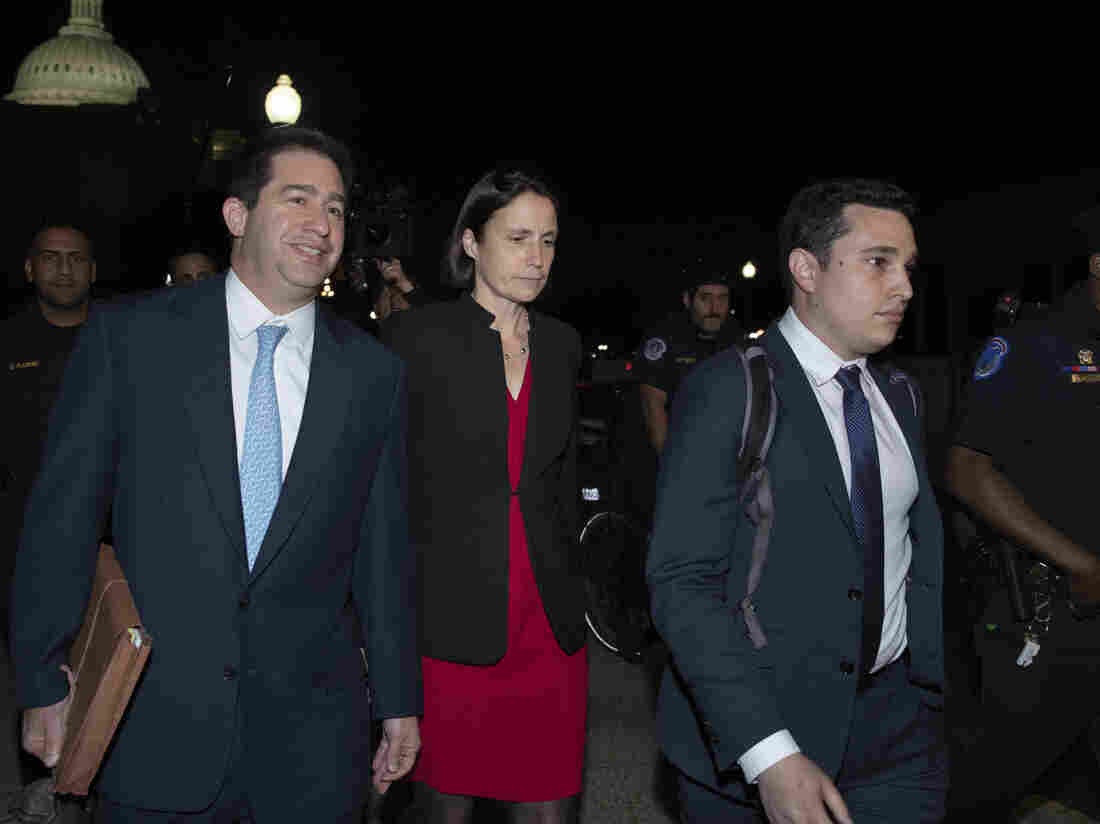 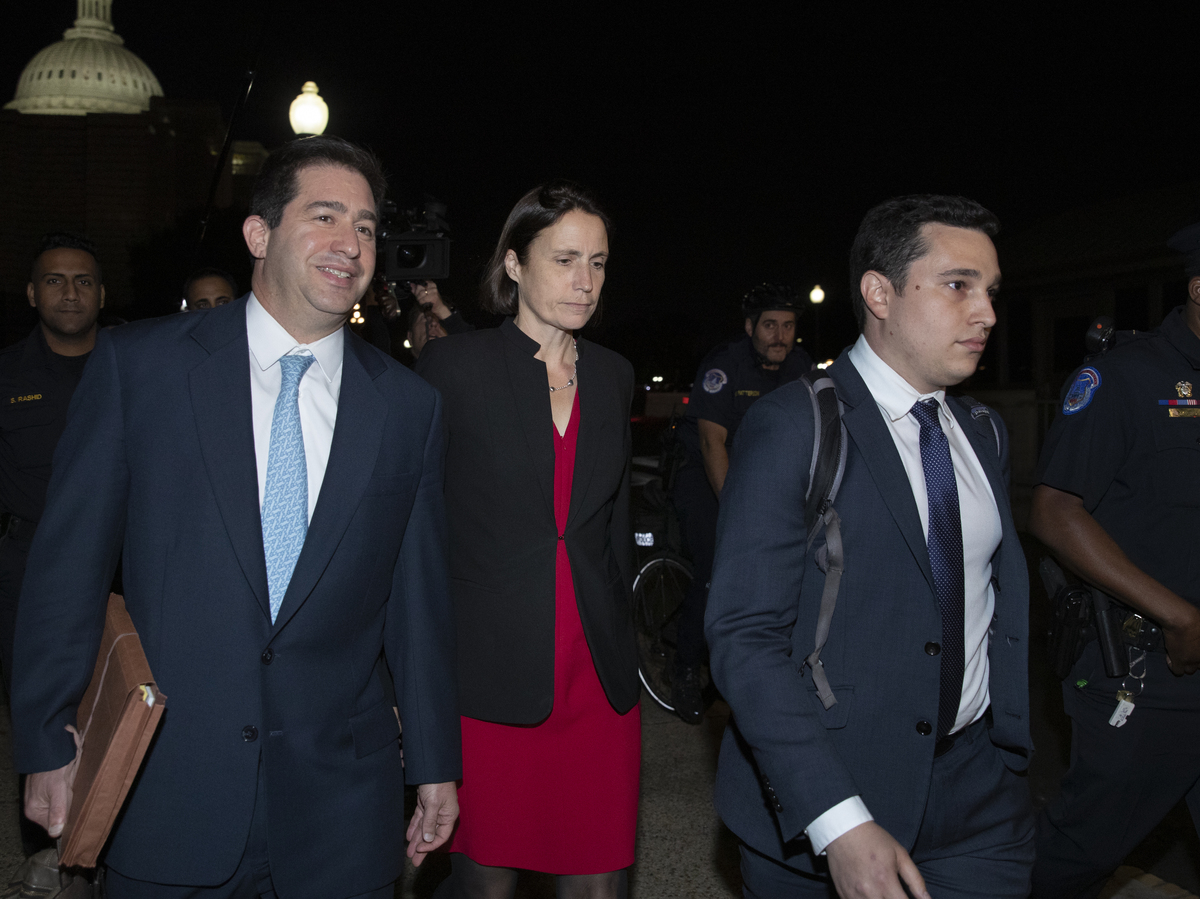 Former White House adviser on Russia Fiona Hill leaves the Capitol on Monday after testifying before lawmakers as part of the House impeachment inquiry into President Trump.

Then-national security adviser John Bolton was distressed about Rudy Giuliani. Trump's personal lawyer had bypassed established procedure for representing the White House with a foreign leader and had launched a secret back channel of communication with Ukraine. The shadowy moves were so potentially combustible that Bolton in private meetings earlier this year called Giuliani "a hand grenade who is going to blow everybody up."

That's according to people familiar with the closed-door testimony delivered on Monday to House members by Fiona Hill, a former White House adviser who was subpoenaed for questioning as part of the unfolding impeachment inquiry into Trump's dealings with Ukraine.

Over more than 10 hours of questioning, Hill, a former White House aide on Russia and Europe, described at length another "tense exchange," on July 10 between Bolton and U.S. Ambassador Gordon Sondland, who was allegedly working with Giuliani to help pressure Ukraine into opening an investigation into Joe and Hunter Biden to help Trump's political prospects in 2020.

At the urging of Bolton, Hill raised concerns up the National Security Council's chain of command, flagging the communications with Ukraine as an alarming departure from long-standing policies and procedures.

According to a source close to Hill, she also described to the three committees leading the investigation how troubled she was over the ouster of former ambassador to Ukraine Marie Yovanovitch after she came under attack by Giuliani and conservative media.

Yovanovitch, a career foreign service officer, testified Friday that Trump pushed the State Department to remove her from the post.

Hill resigned from the National Security Council just days before Trump's July 25 call with Volodymyr Zelenskiy, the president of Ukraine, which touched off the Democrats' impeachment inquiry.

According to a whistleblower complaint about the call, Trump pressured Zelenskiy to open a probe into the Bidens. While Trump has denied any wrongdoing, Trump's critics say the exchange with Zelenskiy, represented in a White House memo, shows that Trump was attempting to enlist a foreign country to damage a political rival and help his own reelection bid.

Discussions have gone quiet about whether Congress will hear from the individual behind the whistleblower complaint, according to a person close to the whistleblower, whose identity is not publicly known.

Rep. Adam Schiff, the chairman of the House Intelligence Committee, has indicated that testimony from the whistleblower who initiated the impeachment inquiry may not be necessary to the investigation. Schiff and other House Democrats are acutely focused on shielding the whistleblower from having his or her identity revealed.

But a slate of other witnesses connected to the impeachment inquiry are filling up the schedules of House investigators. On Tuesday, George Kent, the No. 2 official in the U.S. Embassy in Ukraine, arrived to answer questions from lawmakers in a closed session. Kent's appearance, like Yovanovitch's, came over objections from the White House. 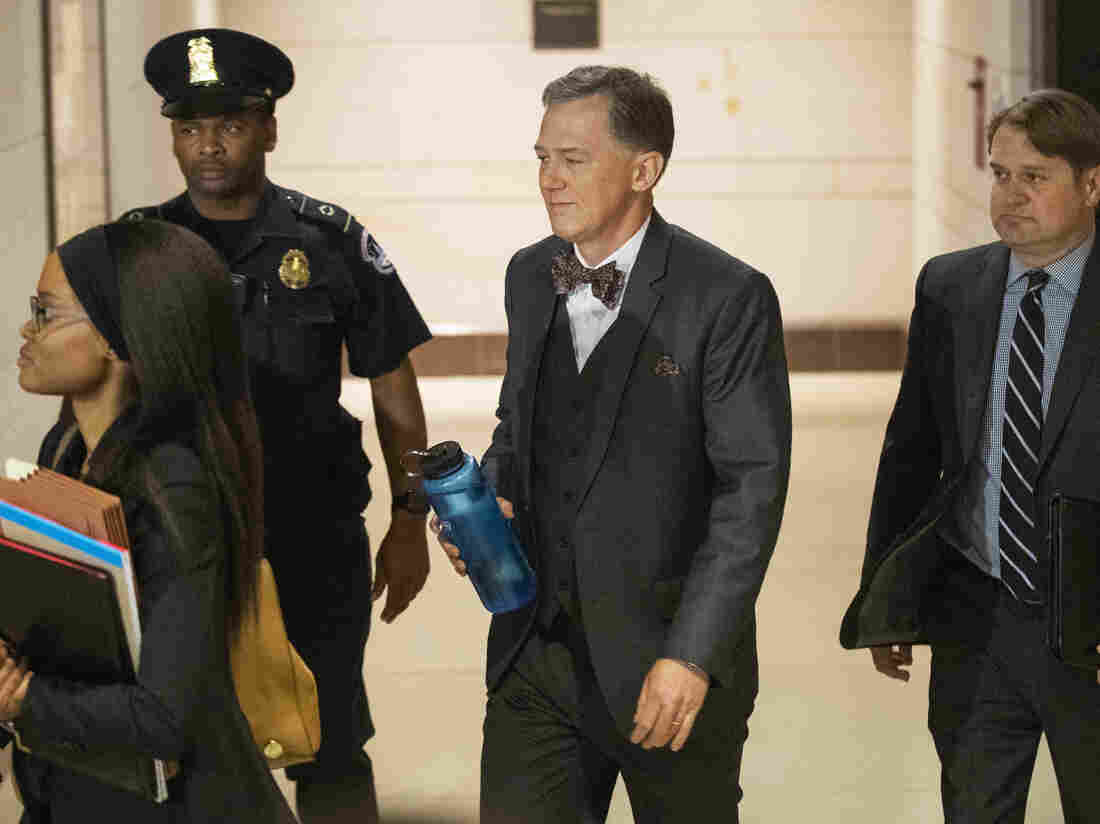 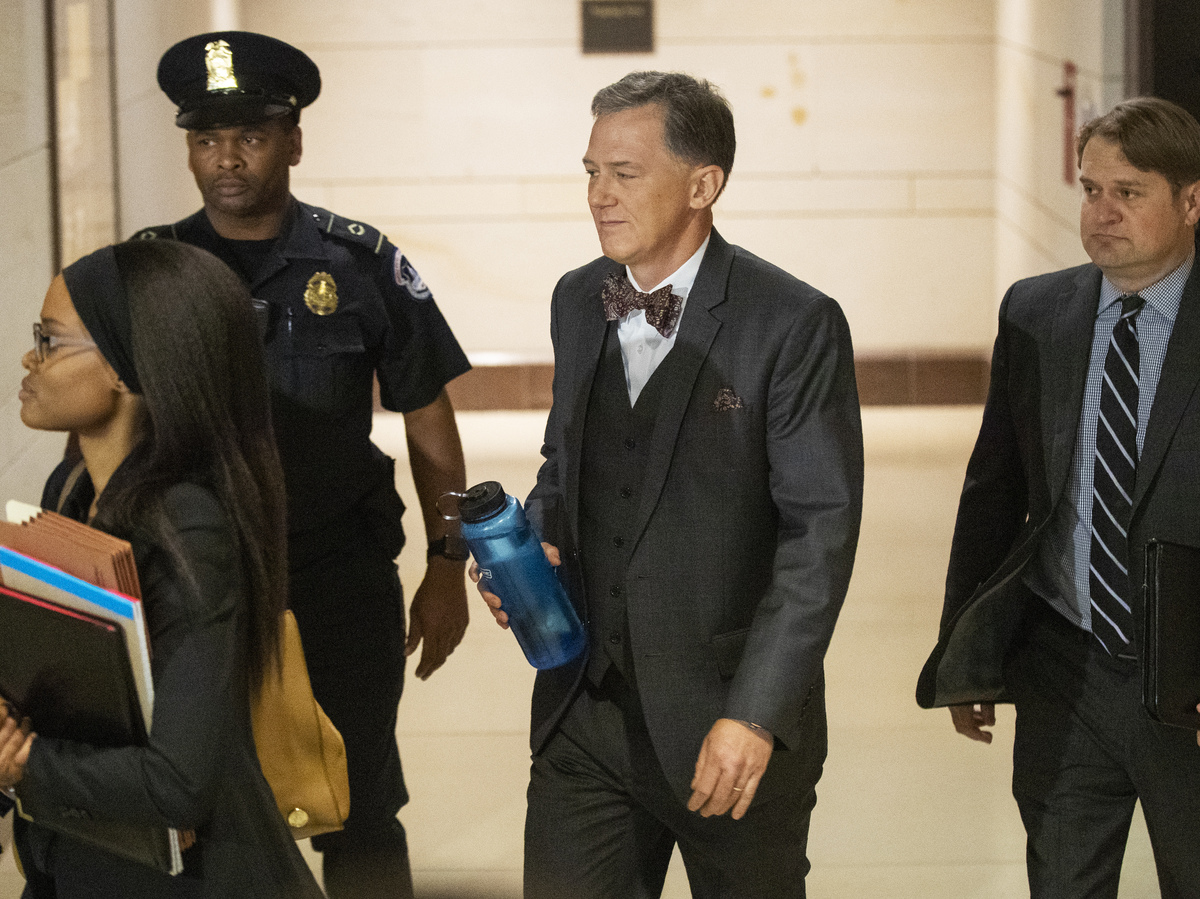 Deputy Assistant Secretary of State George Kent (center) arrives to appear for a deposition before a joint House Committee on Foreign Affairs, Permanent Select Committee on Intelligence, and Committee on Oversight and Reform.

In emails sent in March and later leaked, Kent is shown defending Yovanovitch in the face of what he called a smear campaign being used to discredit her in conservative media. In another message, Kent slams the Ukrainian prosecutor who left office in a corruption scandal and who pushed damaging allegations against Yovanovitch.

Kent was expected to be questioned over whether Giuliani had a role in removing Yovanovitch and about the alleged pressure campaign mounted by Giuliani and other Trump associates to urge Ukraine to open an investigation into the Bidens.

On Wednesday, another career diplomat, Michael McKinley, is scheduled to appear. Then on Thursday, House investigators are set to hear from Sondland, the U.S. ambassador to the European Union.

Text messages between Sondland and other top State Department officials released earlier this month by House Democrats showed a plan to tie military aid to Ukraine with benefits to to that country, including a visit to the White House by Zelenskiy. In one of the exchanges, Sondland tries to assure another envoy that Trump has been "crystal clear" that the dealings with Ukraine show "no quid pro quo of any kind."

The White House, meanwhile, is strenuously refusing to cooperate with the impeachment inquiry, making the House committees compel witnesses to appear by issuing subpoenas.

Giuliani also says he will not comply with the investigation. On Tuesday, a lawyer for Giuliani called the impeachment inquiry "unconstitutional and baseless."

Other Republicans have denounced House Speaker Nancy Pelosi, asking the whole House to vote on whether to hold an impeachment inquiry, but Pelosi has said that a floor vote is not required. Once the witness interviews and other evidence-gathering is complete, House leaders will decide whether to vote on articles of impeachment against Trump.

Rep. Jim Jordan, R-Ohio, who has been one of the most vocal critics of the impeachment inquiry, says the witness depositions are being "hidden from the American people."

"This testimony should be available to every member of Congress and every single American," Jordan tweeted on Monday. "What is Schiff hiding?"