Accessibility links
Warren Defends Support For 'Medicare For All,' Wealth Tax During Debate Facing scrutiny from other candidates for the first time, Sen. Elizabeth Warren's policy positions were described as unrealistic and expensive by her rivals in the Democratic debate. 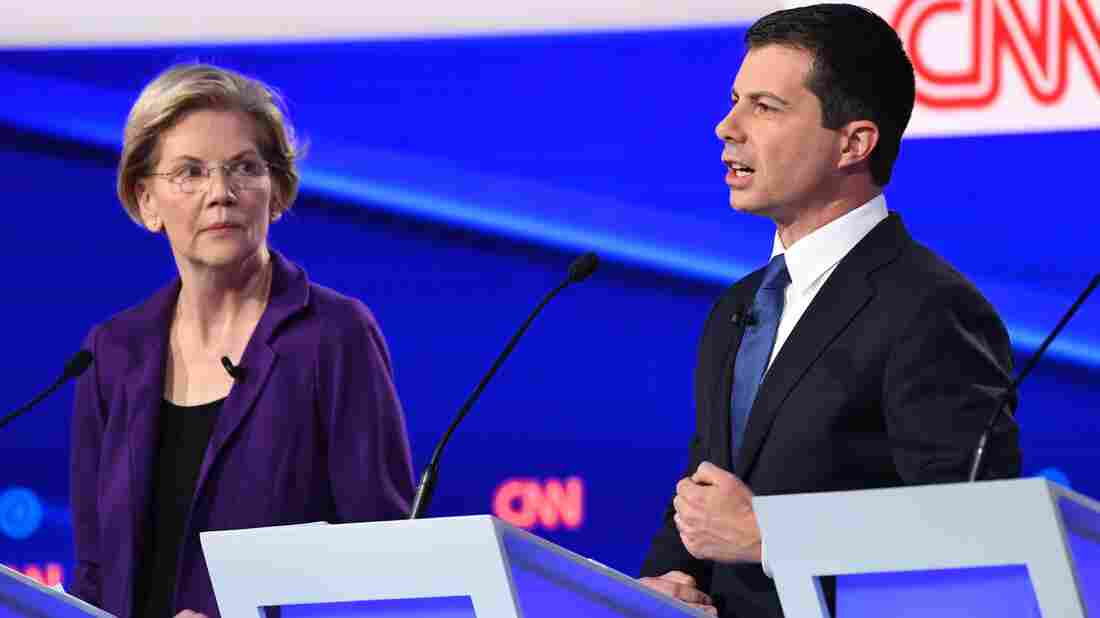 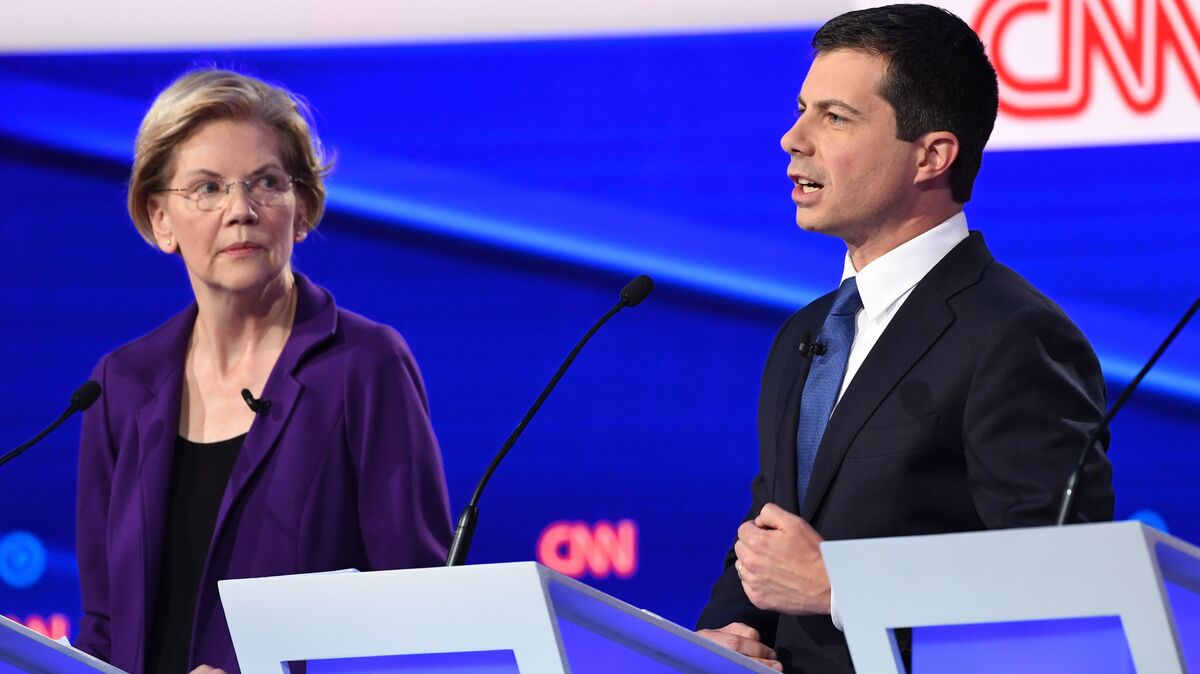 "Medicare for All" — the single-payer health care plan supported by both Warren and Vermont Sen. Bernie Sanders — was the main topic in this moderate-progressive fight.

Warren has been asked repeatedly about raising taxes on middle-class Americans to pay for that plan. She and Sanders were the two candidates onstage who full-throatedly support Sanders' version of Medicare for All. (Cory Booker and Kamala Harris were co-sponsors, but Harris has now come out with her own plan and Booker has backed off his support.)

Moderators asked Warren, "yes or no," whether she would raise taxes to pay for Medicare for All and her other plans. Warren instead made points that she regularly makes on this question: her contention that total costs under the plan will go down for middle-class Americans, while the wealthy will foot a large portion of the bill.

The underlying argument that Warren is making is that while voters might pay higher taxes under Medicare for All, that would be more than outweighed by the elimination of health care costs like premiums or copays. She very pointedly did not say that taxes would go up — something that could be easily weaponized.

"Well, we heard it tonight — a yes-or-no question that didn't get a yes-or-no answer," he said.

He later added that the Sanders version of Medicare for All that Warren has endorsed would almost entirely eliminate private insurance, which stands in opposition to what many Americans want from their health care: "I don't think the American people are wrong when they say that what they want is a choice."

While Sanders' Medicare for All bill does not lay out the taxes it would impose, he has floated the idea of a 4% tax on all Americans making over $29,000 per year as one way to pay for it, along with taxes on the rich.

It is possible that many middle-class families will pay less under Warren's plan. But without knowing exactly which taxes would be raised and by how much, however, it is impossible to know exactly what the effects would be, as the Washington Post reported recently.

While Warren did not say it, Sanders himself did say that taxes would go up for many Americans.

"I do think it is appropriate to acknowledge that taxes will go up," Sanders said. "They're going to go up significantly for the wealthy. And for virtually everybody, the tax increase they pay will be substantially less, substantially less than what they were paying for premiums and out-of-pocket expenses."

Minnesota Sen. Amy Klobuchar used this as an opening to also attack Warren for not directly making that point herself.

"At least Bernie is being honest here and saying how he's going to pay for this and the taxes are going up," she said. "And I'm sorry, Elizabeth, but you have not said that, and I think we owe it to the American people to tell them where we're going to send the invoice."

Warren, for her part, stuck to her main line of argument, on highlighting total costs: "The problem we got right now is the overall cost of health care," she said in responding to Klobuchar.

Biden later added his own input, saying that Warren was being "vague" in her answers.

The idea of a wealth tax — an idea pitched by both Sanders and Warren — was also the locus of more moderates-versus-Warren arguments. Warren has made her wealth tax one of her cornerstone issues, saying that it would pay for several of her more sweeping plans, like tuition-free public college.

Episode 929: Could A Wealth Tax Work?

Episode 929: Could A Wealth Tax Work?

The tenor of this debate was different, however, with the attackers saying they are open to the idea.

"I'm all for a wealth tax. I'm all for just about everything that was just mentioned in these answers," Buttigieg said. "Let me tell you, though, how this looks from the industrial Midwest where I live: Washington politicians, congressmen and senators saying all the right things, offering the most elegant policy prescriptions, and nothing changes."

Polling shows that a wealth tax is more popular than Medicare for All and in some polls even gets more support than opposition from Republicans.

Similar to Buttigieg, Klobuchar said she could support a wealth tax but added that she would rather repeal tax cuts for higher-income Americans passed under Trump.

"It could work. I am open to it. But I want to give a reality check here to Elizabeth, because no one on this stage wants to protect billionaires," she said. "We just have different approaches. Your idea is not the only idea."