Accessibility links
Fancy Goldfish Affected By Tariffs In The Trade War With China China is considered the motherland of aquarium goldfish, bred over centuries into rare forms. Now tariffs have some U.S. sellers of these goldfish in a tailspin. 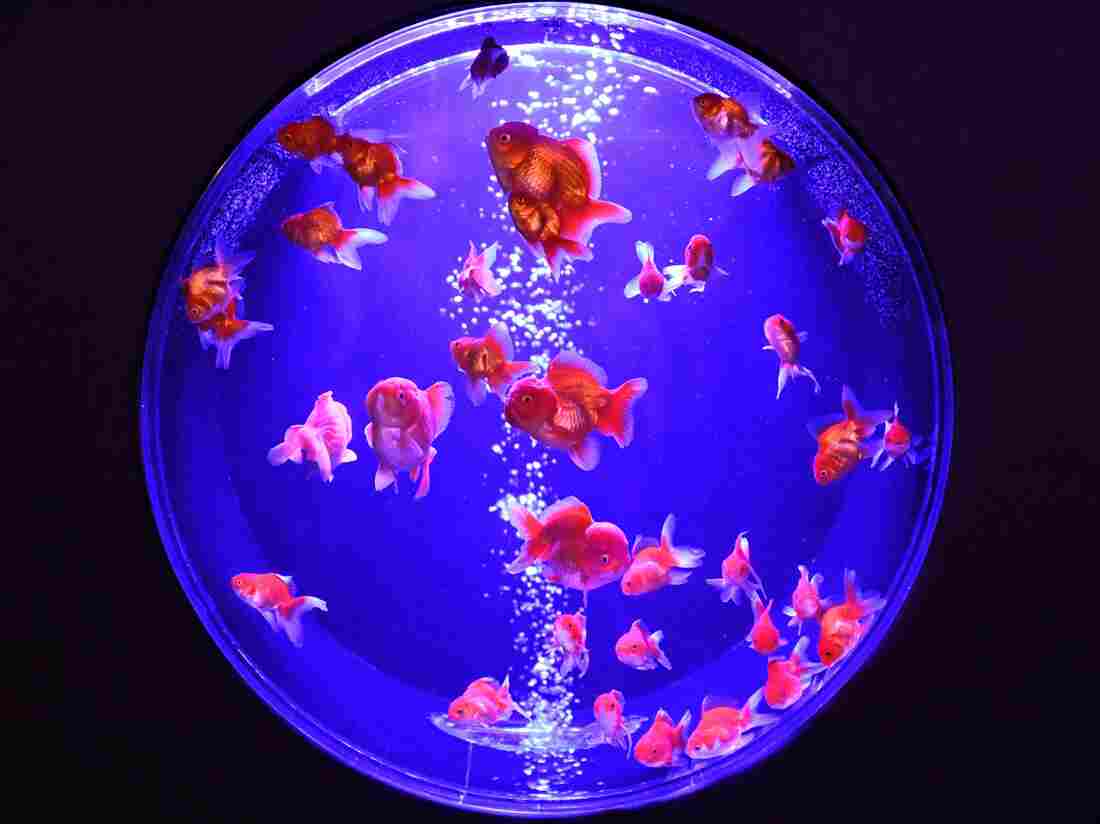 Goldfish, like these showcased at Tokyo's Nihonbashi Art Aquarium, have been bred in China over centuries, into forms so varied and rare that one can be worth hundreds of dollars. Toshifumi Kitamura/AFP/Getty Images hide caption 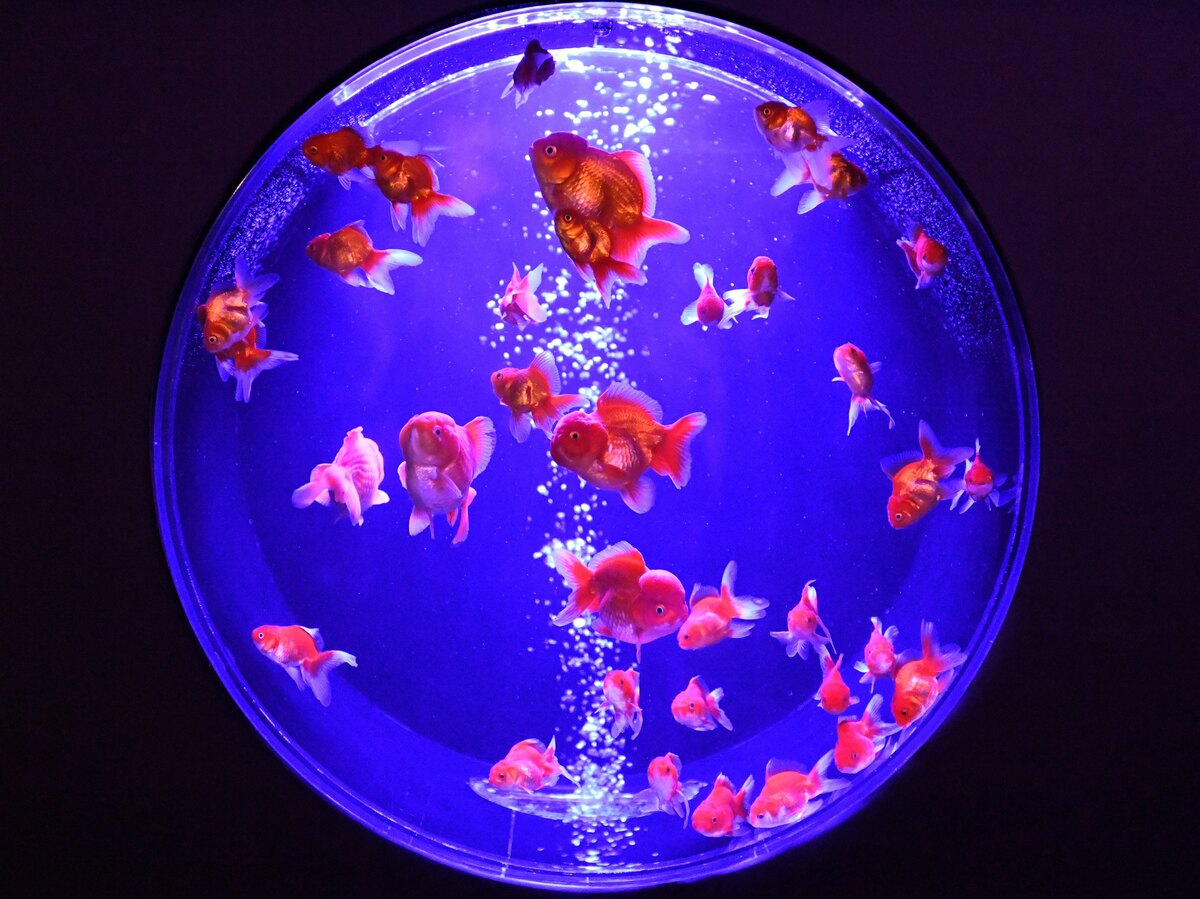 Goldfish, like these showcased at Tokyo's Nihonbashi Art Aquarium, have been bred in China over centuries, into forms so varied and rare that one can be worth hundreds of dollars.

What do goldfish have to do with the global trade balance?

That's a question that has Ken Fischer reeling. He sells rare goldfish. And goldfish — the live pet, not the snack food — are tucked in on page 31 of list three of Chinese imports that face tariffs of 25%.

The math is very different for sellers like Fischer. His Michigan company is Dandy Orandas, named for a type of fancy goldfish. It deals in top-shelf fish — telescoping eyes, calico colors, feather-like fins — that can go for well over $100 apiece.

"My income is literally cut in half by tariffs," Fischer says. As a U.S. importer of a Chinese good, he is the one on the hook to pay the tariff.

NPR Shopping Cart Economics: How Prices Changed At A Walmart In 1 Year

Goldfish are among hundreds of products caught in the wide net cast by the Trump administration's trade war with China. The countries reached "phase one" of a trade deal on Friday, averting a new tariff increase that had been slated to kick in this week. Yet, the tentative truce doesn't undo existing tariffs. The White House has argued that reeling in Chinese imports would, among other things, also lure back jobs and factories to America.

For aquarium goldfish, China is not simply a source, but a motherland. There, goldfish have been bred over centuries into forms so varied and unusual that some enthusiasts and aquarists consider them a living art form. 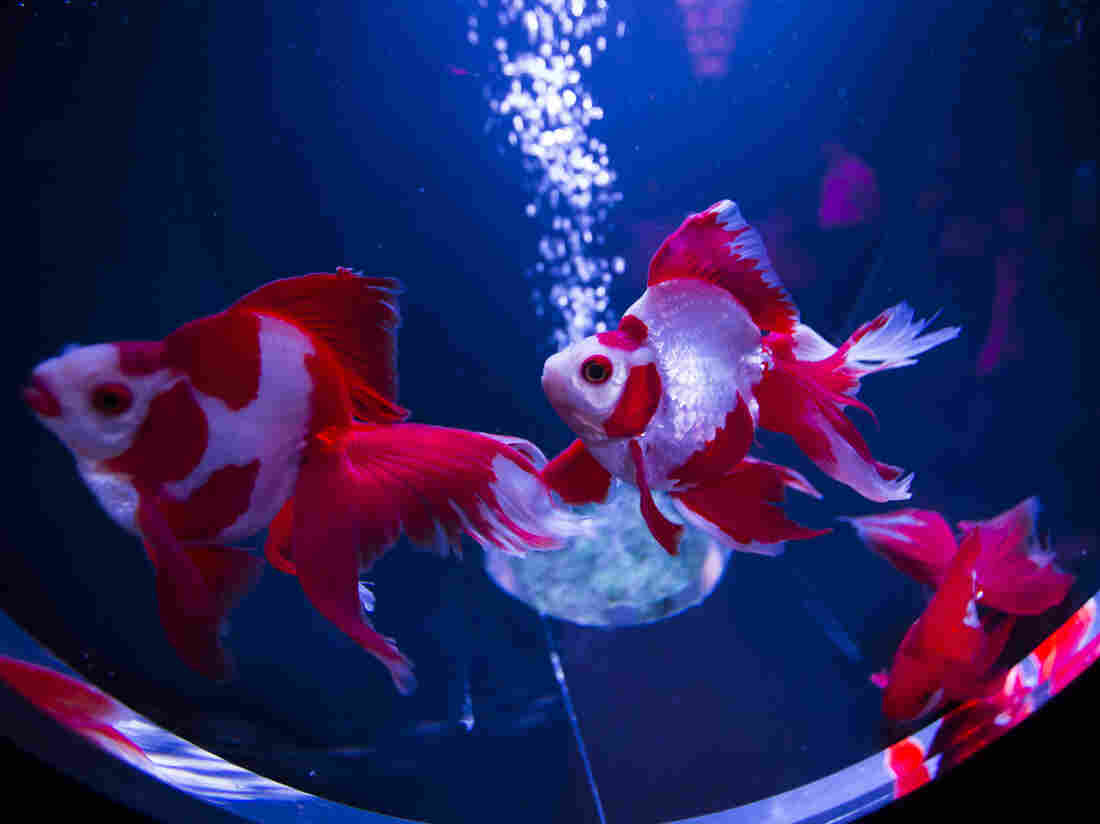 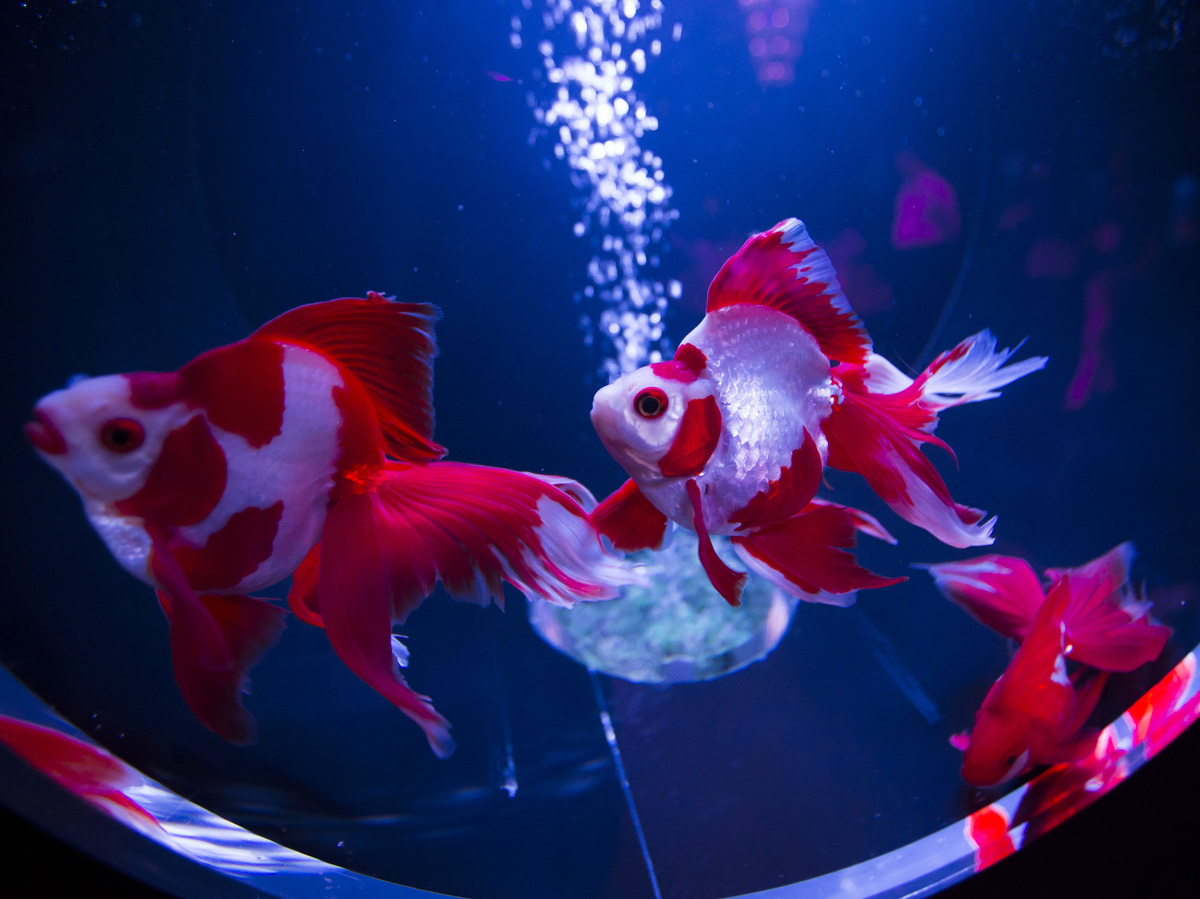 Ryukin goldfish swim at the "Art Aquarium 2016" exhibition in Tokyo.

A scroll through Fischer's website is a parade of gauzy fins and luminescent scales. There's the butterfly telescope with exaggerated protruding eyes and two tails that fan out horizontally like wings. The delicate veiltail with a sail-like dorsal fin. The pearlscale goldfish that looks studded with beads. One fan favorite is the ranchu, which loosely resembles a plump potato with a cheeky pug-like face.

Prices for high-quality grown fish can run $125 to $300 on average. Fischer says he has sold higher-end specimen for over $1,000. Most pet stores will carry some cheaper but still fancy types like orandas with raspberry-like growths atop their heads.

As tariffs escalated earlier this year, Fischer took stock of his online business. It's a one-man operation, importing about 6,000 goldfish a year. Fischer's home is their care center and habitat with dozens of tanks and tubs plus an indoor pool.

In 2018, the U.S. bought more than $1.2 million worth of live ornamental freshwater fish from China, according to trade data from the U.S. Census Bureau. This covers goldfish and related crucian carp.

But Fischer gets frustrated by a comparison to another number: The U.S. trade deficit last year soared to a 10-year high of $621 billion.

"A small niche business like mine shouldn't be part of the equation," he says. The U.S. Trade Representative's office did not comment on why the government decided otherwise. 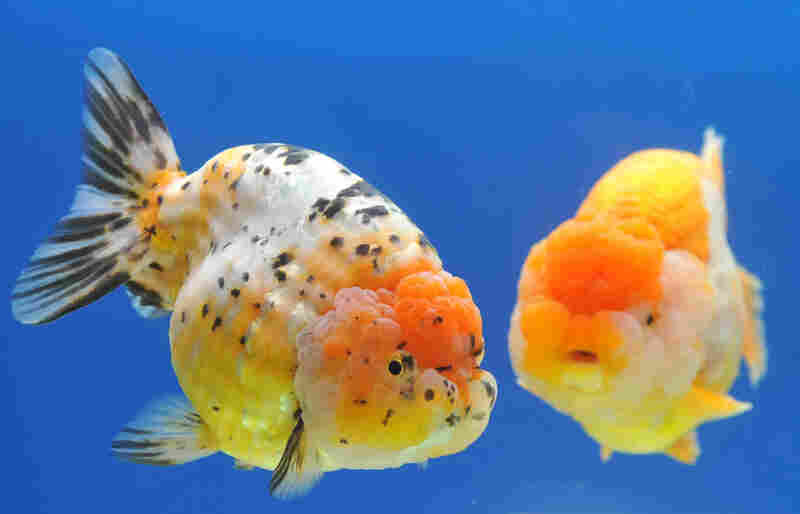 There are goldfish breeders in other countries, including the U.S., but "the selection is still pretty limited because here in the U.S. we just don't have nearly the availability of the exotic breed," says Meredith Clawson, long-time goldfish keeper and author on the hobby.

"For fancy goldfish enthusiasts like me, the rare ones can only be gotten in places like China," Clawson says.

Breeding high-quality goldfish can be a labor-intensive affair, which contributes to the high price tag. And it can take years for a fancy goldfish to grow to a good size.

At Chinese farms, Fischer says, workers cull through millions of fry, or baby fish, with tablespoon-sized nets, spotting deformed or otherwise undesirable fish. They repeat the procedure as fry grow, sifting through acres and acres of ponds.

"It's not something that comes off an assembly line," says Joe Hiduke, sales manager at Florida-based wholesaler 5D Tropical. "So it's not like all of a sudden, we can be buying goldfish from a different goldfish factory."

Hiduke's company sells fish to stores that include large U.S. pet chains. Hiduke says he can pass on some costs to distributors and retailers, but 5D Tropical has contract obligations with larger chains that reassess what fish to stock and how much to charge only about once a year.

"Our options are either to sell these fish at a loss or not fill the product for the stores," Hiduke says, "in which case — we are evaluated very regularly on our fill rate, and if the fill rate suffers, then we potentially are losing more business than just those goldfish."

In a statement, PetSmart said the company was evaluating the tariffs and strategies to deal with them, working with partners to "manage the potential impact." A spokeswoman for rival Petco told NPR that the company was "not aware of any impact on the price or availability of goldfish at Petco related to tariffs."

For Fischer, the uncertainty of the trade war — so often decried by corporate CEOs and trade groups — has become a matter of livelihood.

When he stopped importing goldfish to avoid tariffs, Fischer shut down his business for a few months. He hadn't had a break in a while, and he hoped that the tariffs would go away. They didn't. And he couldn't afford to stay closed.

He says he can't easily raise prices — there's a lot of competition, and ultimately, fancy goldfish are a luxury. So he's spinning his wheels, as he puts it, trying to decide when to cut bait.