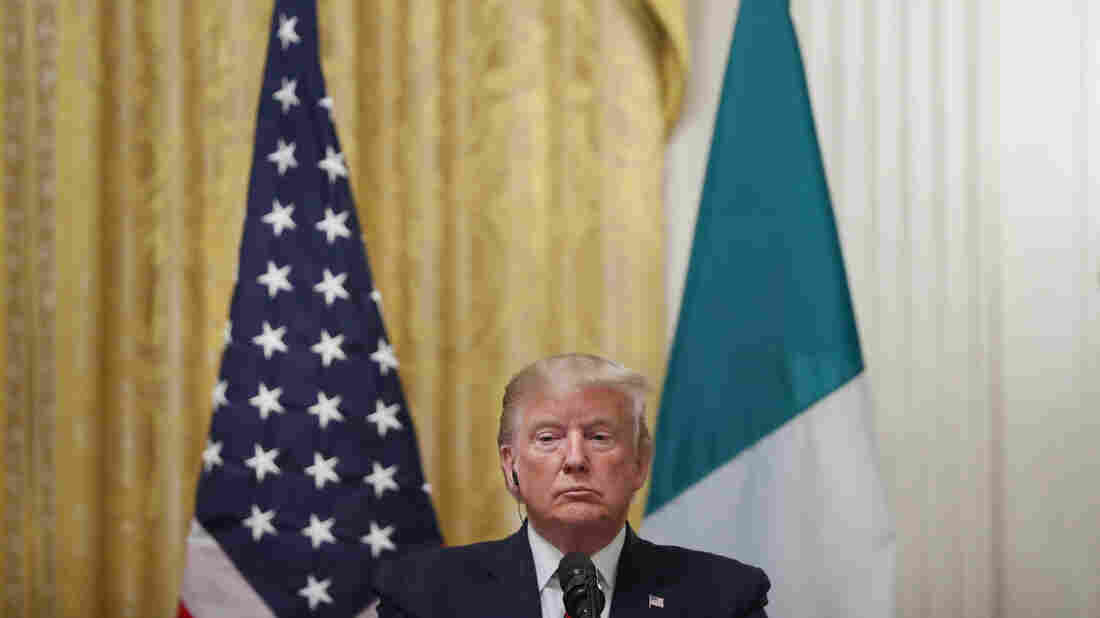 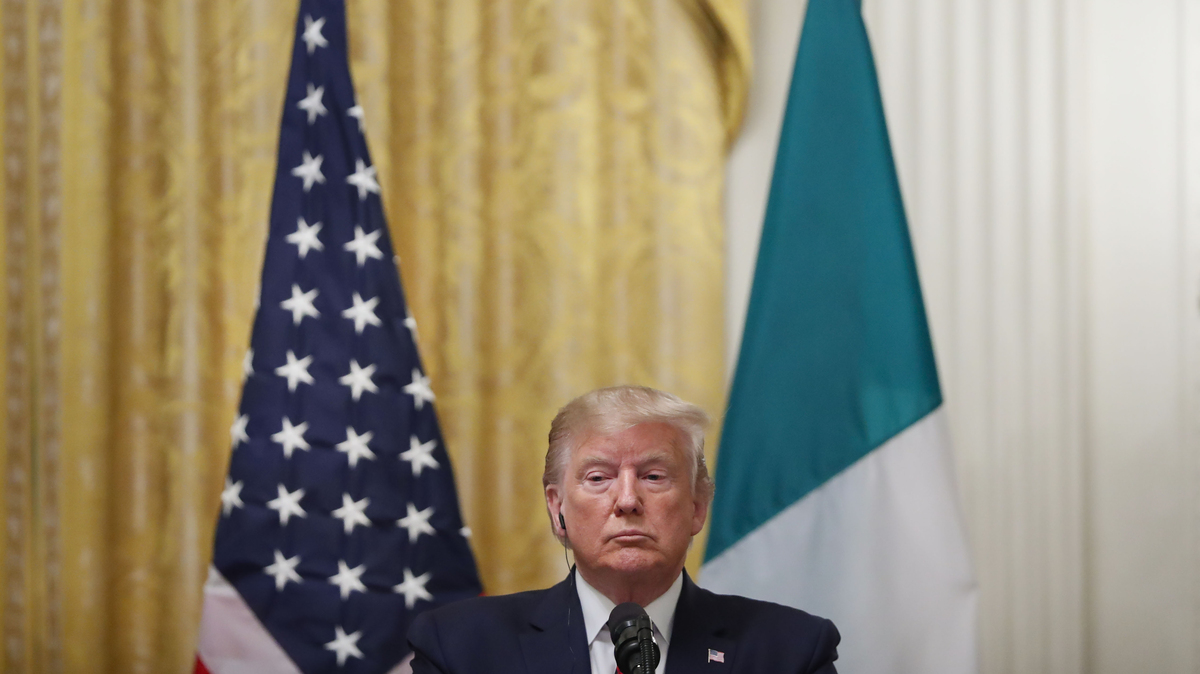 President Trump listens during a news conference with Italian President Sergio Mattarella at the White House on Wednesday.

Congressional Democrats walked out of a bipartisan White House meeting with President Trump about his decision to pull U.S. troops out of Syria, a meeting in which Trump called House Speaker Nancy Pelosi "a third-rate politician" according to Senate Minority Leader Chuck Schumer.

Speaking to reporters on the White House driveway Wednesday after the meeting, Pelosi said the president had a "meltdown" inside, looked shaken, "and was not relating to reality."

Trump lobbed the same insult back Wednesday night, tweeting that it was Pelosi who had the "meltdown":

Nancy Pelosi needs help fast! There is either something wrong with her “upstairs,” or she just plain doesn’t like our great Country. She had a total meltdown in the White House today. It was very sad to watch. Pray for her, she is a very sick person!

Trump also tweeted a photo of Pelosi pointing a finger at him during the meeting, captioned "Nervous Nancy's unhinged meltdown."

Pelosi has announced an impeachment inquiry is underway over Trump's efforts to get Ukraine to look into former Vice President Joe Biden and his son's dealings in that country.

Pelosi said the subject of impeachment did not come up Wednesday.

Schumer said Trump was not engaged in a dialogue, but "a nasty diatribe, not focused on the facts, particularly the fact of how to curtail ISIS that aims to hurt the United States in our homeland."

Two Democratic sources tell NPR that the president started the meeting with a lengthy monologue bragging about his letter to Erdogan.

According to two Democratic sources, Schumer read Trump a quote from former Defense Secretary James Mattis — who resigned last December after Trump first threatened to pull out of Syria — from the weekend predicting that "ISIS will resurge" and "come back" if Trump continues with his current military strategy.

Trump then cut Schumer off and called Mattis "the world's most overrated general," the sources say.

"You know why? He wasn't tough enough. I captured ISIS. Mattis said it would take two years. I captured them in one month," the president continued in berating his former defense secretary.

Sources also say Trump told lawmakers that "fewer than 100" ISIS prisoners have escaped and that they were the "least dangerous ones," but Defense Secretary Mark Esper told Schumer that he didn't know if they were, in fact, the least dangerous.

The sources say that when Pelosi and Hoyer were getting ready to walk out of the meeting, the president said to them: "I'll see you at the polls."

White House Press Secretary Stephanie Grisham disputed Democrats' characterization of events, saying that Trump "was measured, factual and decisive, while Speaker Pelosi's decision to walk out was baffling, but not surprising" and that Pelosi "had no intention of listening or contributing to an important meeting on national security issues."

The meeting followed a vote by the House on Wednesday afternoon, in which lawmakers overwhelmingly approved a bipartisan resolution opposing the Trump administration's shift in policy. The vote on the nonbinding resolution was 354-60, with four members voting "present."

Trump defended his decision to pull U.S. forces from Syria earlier in the day, telling reporters at a photo op that Syria and Turkey "have a problem at the border; it's not our border" and that "they've got a lot of sand over there. There's a lot of sand they can play with."

He said the Kurds, who fought alongside U.S. forces against ISIS, are "much safer right now" and added, "They're not angels."

Trump's sudden pullback of U.S. forces from northern Syria, which has led to an incursion into the region by Turkey aimed at the Kurds, has been criticized by lawmakers from both parties.

The resolution states that Congress "opposes the decision to end certain United States efforts to prevent Turkish military operations against Syrian Kurdish forces in Northeast Syria." It also called on the White House to "present a clear and specific plan for the enduring defeat of ISIS."

At a news conference with Italian President Sergio Mattarella, Trump also denied that his decision to withdraw U.S. forces from the area enabled Turkish President Recep Tayyip Erdogan to launch the attack, saying, "I didn't give him a green light." Trump also insisted that Erdogan's decision "didn't surprise me," saying the Turkish leader has "been wanting to do that for years."

Trump signs off, "Don't be a tough guy. Don't be a fool! I will call you later."

Trump blamed the widespread opposition to his withdrawal order on the "military industrial complex," saying, "A lot of companies want to fight, because they make their weapons based on fighting not based on peace."

Asked about congressional opposition to his decision, including from Sen. Lindsey Graham, R-S.C., Trump said, "Lindsey Graham would like to stay in the Middle East for the next thousand years."

He added, "I think Lindsey should focus right now on [the] judiciary [committee]."

On Capitol Hill, Senate Majority Leader Mitch McConnell, R-Ky., said he wanted "to express my gratitude to the Kurds," saying the U.S. had a great alliance with them. "I'm sorry we are where we are," he said.

But echoing Erdogan, Trump said Kurdish fighters who are members of the militant PKK are "probably worse in terror and more of a terrorist threat in many ways than ISIS."

Trump said, "It's their part of the world. We're 7,000 miles away. I campaigned on bringing our soldiers back home," he said, "and that's what I'm doing."

"Russia, Iran, Syria and, to maybe slightly lesser extent, Turkey, they all hate ISIS as much as we do."

The press conference came as Vice President Pence and Secretary of State Mike Pompeo prepare to fly to Turkey to meet with Erdogan.

In a previous version of this story and in a headline, we incorrectly quoted President Trump as saying, "It's not our problem" when talking about Syria. Trump actually said, "They have a problem at the border; it's not our border."