Accessibility links
In Democratic Debate, A Fiery Clash Over U.S. Role In Syria All the candidates oppose President Trump's recent troop withdrawal. But the two military veterans on the stage revealed a lack of consensus over how the U.S. should move forward in the Middle East. 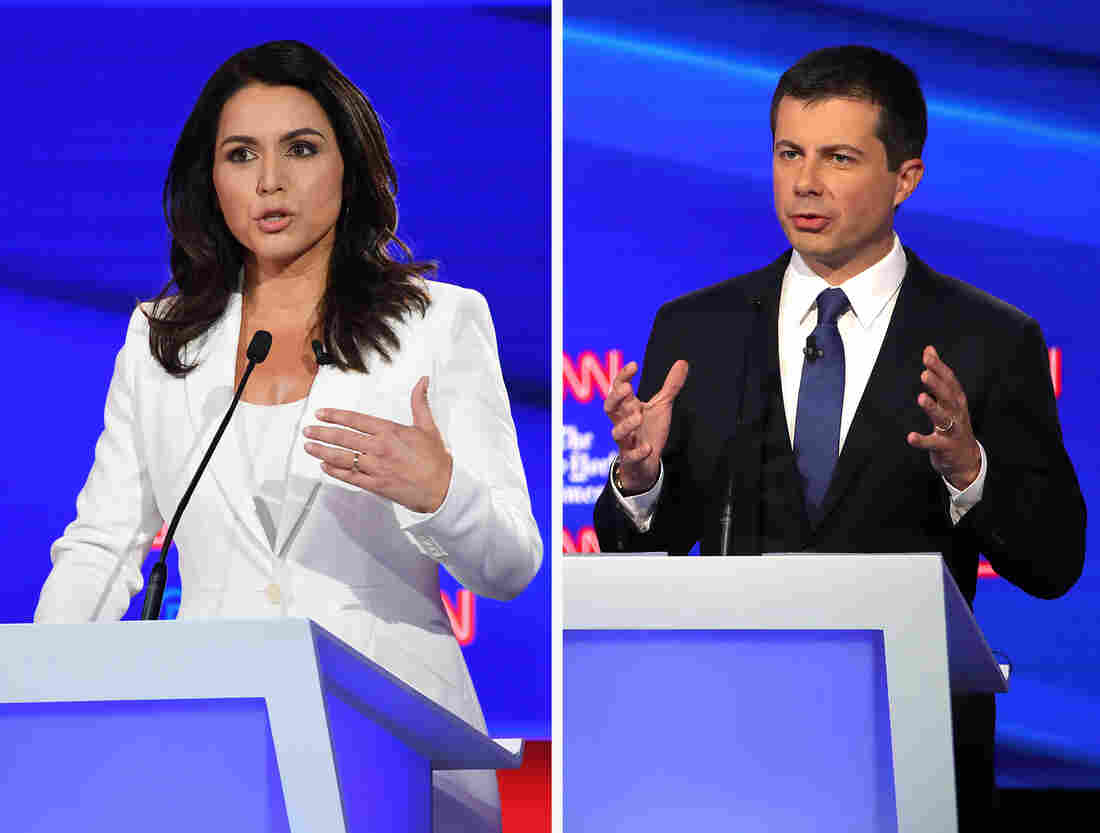 Democrats onstage during their party's presidential debate were quick to condemn President Trump's abrupt and unilateral decision to withdraw U.S. forces from Syria. But their responses as to what role the U.S. should play in the region were generally cloudier.

Trump's decision last week appeared to set in motion a Turkish incursion into northern Syria and the advancement of Turkish-backed militias against Kurdish forces that had helped the United States battle ISIS.

The most fiery clash in the Democratic debate over Syria came between the two military veterans on the stage.

Hawaii Rep. Tulsi Gabbard, who served in Iraq, said Trump has blood on his hands for abandoning Syrian Kurds, but she went on to accuse members of both parties of fueling "regime change wars" across the Middle East.

South Bend, Ind., Mayor Pete Buttigieg, who served in Afghanistan, shot back at the congresswoman, saying she was "dead wrong," and argued that the "slaughter going on in Syria" is Trump's fault, not a consequence of America's presence in the region.

"We need to get out of Syria, but it's also the case that a small number of specialized special operations forces and intelligence capabilities were the only thing that stood between that part of Syria and what we're seeing now, which is the beginning of a genocide and the resurgence of ISIS," said Buttigieg.

"You would continue to support having U.S. troops in Syria for an indefinite period of time to continue this regime change war that has caused so many refugees to flee Syria," Gabbard said.

Despite unanimous agreement among the Democratic candidates that Trump made a poor decision, there's little consensus on what role the United States should play in the Middle East moving forward.

Sen. Elizabeth Warren echoed Gabbard in arguing that U.S. troops need to be pulled out but warned it must be done in a "smart way."

U.S. forces first entered Syria in 2015 during the Obama administration. Obama's vice president, Joe Biden, said during the debate that the United States needs to provide military support to Syrian Kurds and claimed that past and current military commanders are ashamed that the U.S. is leaving its allies in Syria to fend for themselves.

"It has been the most shameful thing that any president has done in modern history in terms of foreign policy," Biden said.

Trump has defended his decision to pull U.S. troops from the region, saying that it's time to bring them home and that they should not be serving as a "police force" thousands of miles away.

Nonetheless, Trump reversed some of his decisions amid a bipartisan and international outcry and slapped sanctions on Turkey.

"We put the strongest sanctions that you can imagine, but we have a lot in store if they don't have an impact, including massive tariffs on steel," Trump said.

On Wednesday, Vice President Pence and Secretary of State Mike Pompeo are headed to Turkey to try to negotiate a cease-fire.